Goodbye Sierra Vista, or the Best of Southeast Arizona

The Monday before Thanksgiving, my boss called up and offered me a promotion. The only catch was that it meant leaving Sierra Vista. We had a great two years in Arizona. When we originally accepted the position here we knew that we wouldn't be here forever, so we tried our best to get out and explore and enjoy the area as much as we could. We'll miss a lot about southeast Arizona, but we're looking forward to seeing and exploring new places as well. That said, we sat down and decided to make a Best of Southeast Arizona post to highlight some of our favorite things we saw or did here. Cochise County has a slogan of “Where the Old West comes alive!” and as we've thought over our experiences here, it's true. So here it is- the best of Southeast Arizona!


There are several mammoth kill sites in the San Pedro Valley, ranging from the privately held Naco site, to the Lehner Mammoth Kill Site, noted by a small plaque, to this one. The Murray Springs site has a short trail with numerous interpretive signs along the way to help visitors understand why/how the mammoths were killed, how the site was preserved, and how the site was excavated. It's worth a stop. Unfortunately, there aren't any of the artifacts found on display at the site.


The Spaniards were in Arizona way before any English speaking Americans. There are towns and missions with Spanish heritage in several spots, Tucson being the most notable, and San Xavier del Bac being the most recognizable. We had a hard time deciding between two of the lesser known sites though. Tumacacori was a Spanish mission founded in the 1600's that is now part of the National Park system. It's easily accessible and well worth visiting. Each time we visited, we left saying that we should come back again soon. El Presidio isn't well known, but it's still fascinating to visit a spot where an Irish Mercenary founded a fortress for the King of Spain, in 1776, the same year the Declaration of Independence was signed.


There are several sites in southeast Arizona from near Tombstone, to along the San Pedro River, to elsewhere. But undoubtedly, the best rock art is the Garden Canyon Pictographs. They're located on Ft Huachuca, up Garden Canyon, a beautiful canyon with a perennial stream lined with sycamores, walnuts, and other native plants. It's the one spot in the United States where potatoes have been found growing wild. The pictographs are well marked, but every time I've been up there they're a little further then I remember them being. Two wheel drive will get you there, but you'll be glad if you have a little extra clearance. If you don't see them, drive a little further and you'll find them. 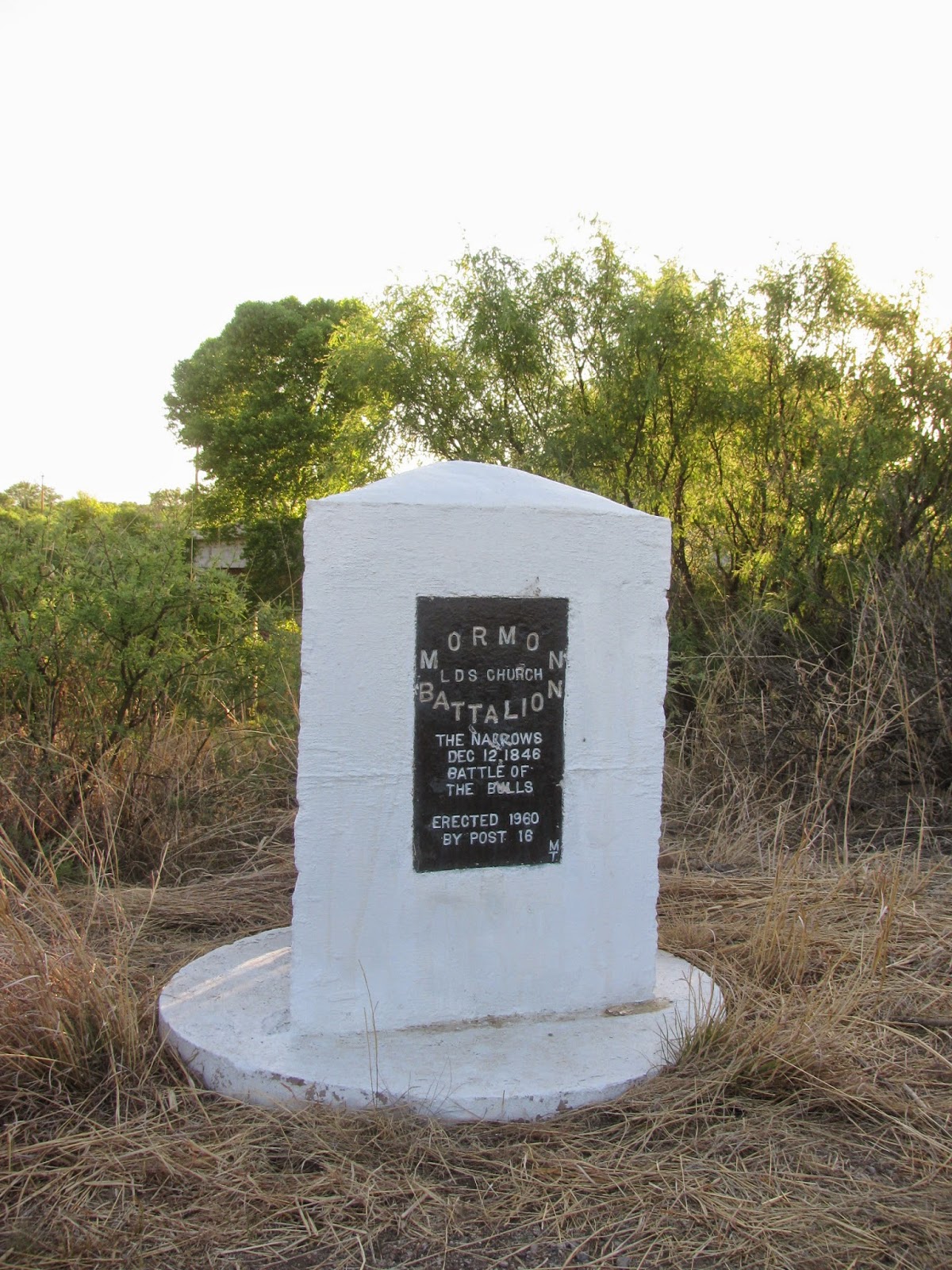 Best Mormon History site: The Battle of the Bulls


There are several markers along the trail where the Mormon Battalion went through on their longest infantry march in recorded history- over 2000 miles from Ft Leavenworth, Kansas to San Diego, California. It's a small marker, but it's still amazing to think of how a small march helped shape the settlement of our country in the decades to follow. Our favorite is the one at the San Pedro River between Sierra Vista and Tombstone.


This was a close race, with Sunnyside a close second. We have had a great time finding and exploring ghost towns, mostly in Cochise County. It seems like this is an area of the west where booms and busts were pretty common as miners and others went from one lode to the next, looking for their own payday. It's still a common occurrence here, as people shuffle in and out of Ft Huachuca, the largest generator of employment in Cochise County.
Camp Rucker is our top ghost town choice, simply because there's still a lot of buildings standing that are in surprisingly good condition. It's easily accessible by passenger cars up Rucker Canyon in the Chiricahua Mountains. We loved wandering the building ruins and stopping at various signposts to read about the inhabitants and how it started out as an Army supply camp before it became a cattle ranch and then was donated to the Forest Service. It's an amazing place.


Ok, I've got to admit- this was pretty much the only backpacking trip we did here, but anytime you can go backpacking with a few kids under the age of 5 and everyone have a great experience, you know you're onto someplace special. The kids had a great time playing and walking through the water, I enjoyed the beautiful scenery and the slot canyon up Deer Creek, and my wife fulfilled a lifelong dream when we saw a mother bear and two cubs. It's a little remote, so if you're at the east end, it's worth taking the short detour up Turkey Creek to find the indian ruin. You might just find the best primitive campsite (non-backpacking) in Arizona up Turkey Creek.


Southeast Arizona is a nirvana for birders. Its got two sites that birders from all over come to visit- the San Pedro Riparian Area and Ramsey Canyon. One lucky birder spotted 14 different varieties of hummingbirds on one day here. Others come and patiently sit, hoping to spot an Elegant Trogan, a tropical cousin of the Quetzal bird sacred to the Mayans, up Ramsey Canyon, one of the only spots in the United States where the bird can be found. But since we're not die-hard birders, and we have young children, we picked a spot that's suitable for, and accessible to just about everybody. During the warmer months there's hummingbird banding at the San Pedro House nearly every week. They get numerous species flying through, Black-chinned being the most common species. Once the hummers are examined, weighed, and banded, lucky members of the audience get to be a launchpad when they are released back into the wild. Be sure to show up about 30 minutes early for the best chances at getting a low number to participate!


Think of a desert. Any desert. Now draw a picture of it. What do you see? Does it look like someplace Wile-E-Coyote and the Roadrunner would live? Or someplace you might spot the Three Amigos? Does it have gigantic cacti with arms pointing emphatically skyward, with a roadrunner or gila monsters? Odds are, you're thinking of the Sonoran Desert. There's a museum for it. Go and visit- and plan on spending all day long. We thoroughly enjoyed what the kids called the “half zoo- half museum”.


Our kids begged to go to the Chiricahuas all of the time. Terrific scenery, no crowds, and a surprising variety of activities. Plan to take a weekend at Chiricahua National Monument- you'll be glad you did.


I was tempted to put Wupatki NationalMonument, but my wife said this was all about the lower right corner of the state, so here's a shoutout to Wupatki as another place to consider in addition to the Grand Canyon for you northern Arizona visitors.


Man- this is a toughie! I mean, how can you go wrong with a hot spring? As I write this, I'm hundreds of miles away from any natural source of hot water, and it's below freezing outside. A nice long soak sure sounds amazing right now. Roper Lake State Park has a nice soak, but it's a high traffic area, that's why I'm putting the Hot Well Dunes as the soak of choice right now. But seriously, you can't go wrong with either one.


Where we lived in Sierra Vista is a newcomer to Cochise County as far as towns go. We scoured the town looking for nice architecture and concluded pretty rapidly that you're not going to find it in Sierra Vista. It's an army town that essentially started to grow in the 1950's. So, we'd occasionally go out to Tombstone or Bisbee to enjoy a sense of place somewhere else. We didn't find it in Sierra Vista. Even though we enjoyed the architectural details elsewhere, we still found Sierra Vista the best place to live, especially with kids. Tombstone is a little too crusty and Bisbee is a little too free spirited. But they are fun for a short visit.


We visited several caves in Cochise County. Coronado Cave is well publicized, and others are not as well advertised. But by far and away, the best cave was Kartchner Cavern. Now I will add that it is pricey. I also prefer primitive caves to developed caves. But Kartchner Caverns is definitely worth visiting. It's wet, humid, and highly decorated. You're not going to find pictures of it as they don't allow you to take pictures. Trust me- it's worth the visit.


Best Hike: Too many to choose!


Wow this one is difficult! I listed several to my wife- Council Rocks, Carr Peak, Charleston, Kings Canyon, Fort Bowie, Sugarloaf Fire Lookout, Kingfisher Pond, RamseyCanyon, and several more. We couldn't decide on which one was best. I'll just say there's a lot of great hiking in the area. Get out and explore and let me know which trail you like best!


Ok, I've got a couple of disclaimers right up front. I'm spoiled and lazy. Most of my life has been within 5 minutes of great fishing. You ask around town and people will tell you to go to Parker Canyon Lake or Patagonia Lake. Well, I'm lazy- and both of those are about an hour drive away from Sierra Vista. So driving two hours round trip to go fishing for ten minutes is not an appealing use of time. I'd rather drive for 5 minutes there , fish for 2 hours, and drive 5 minutes back home. The problem is options. You don't have them if you're a fisherman in Sierra Vista. But if you need a fix, the Officers Club Pond on Ft. Huachuca can help you get by.

Best Event: Tie between Cavefest and the Electric Light Parade
There are several events in Sierra Vista and the surrounding area that we went to and enjoyed.  The Christmas Light Parade is a huge event and one of our favorites.  We ended up missing it this year because we moved away, but would have been there otherwise.  There are always farmers markets, or car shows, or art in the park type events going on at Veterans Memorial Park. We also enjoyed finding a few smaller events such as the Cochise & Western Model Railroad Open House or the Star Parties at Patterson Observatory.  Cavefest is a growing event and was tons of fun.  It was an absolute blast last year.
We had a great time living in Sierra Vista. Looking back, it's amazing how much history is woven throughout Cochise County. We visited and explored the area pretty well, but still didn't see it all. We hope you enjoy it as much as we did!
Posted by Ben at 6:43 PM