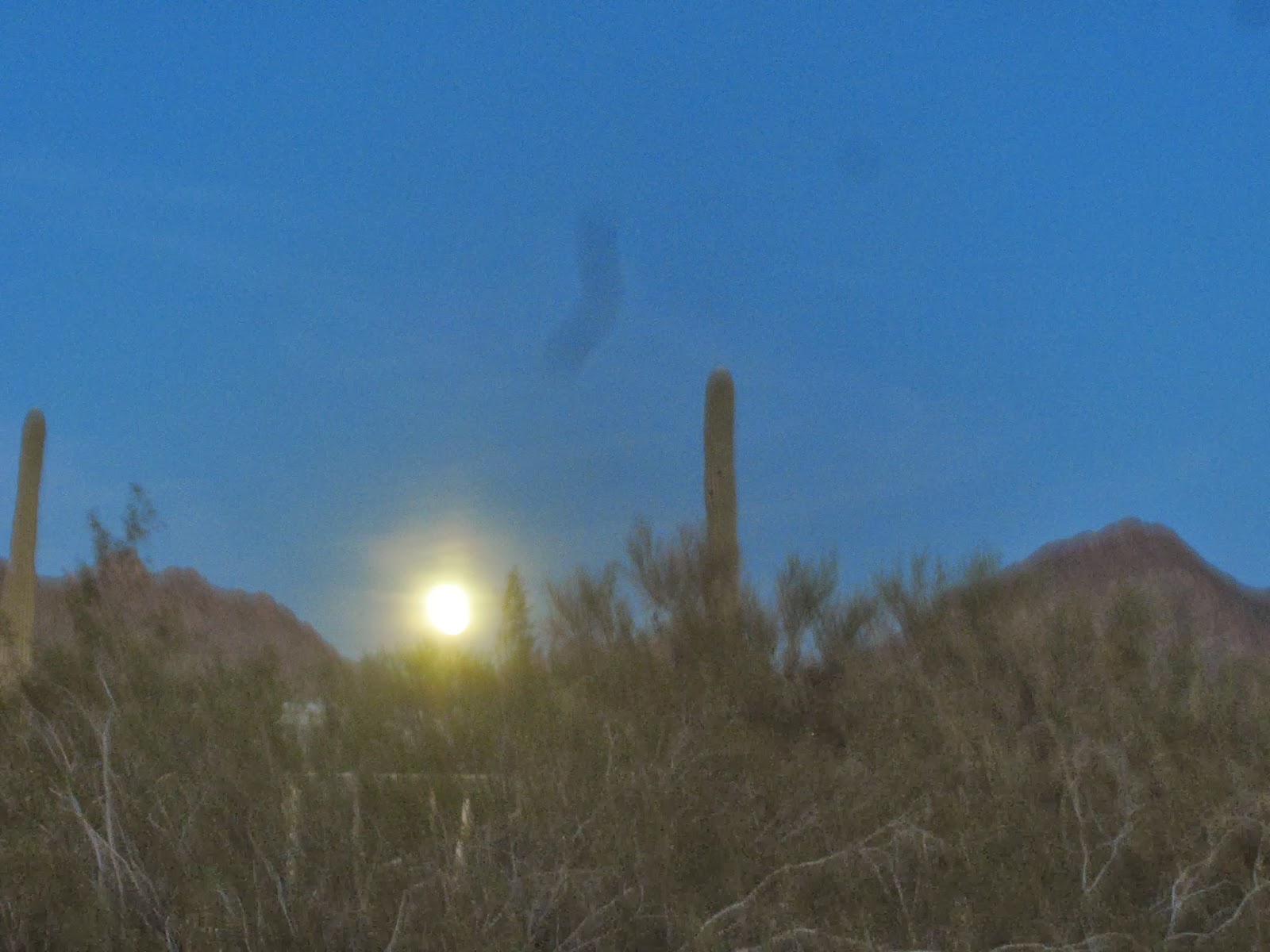 The Friday night of Presidents Day weekend we drove to Tucson, then kept on going to Tucson Mountain Park.  Along the way we passed Old Tucson Studios, then a short distance later turned into the Gilbert Ray Campground.  It's the closest campground to Tucson, and is virtually without competition.  There are 130 RV sites, and 5 tent sites, but the tent campers can camp in RV sites if the tent sites are all filled.  There seems to be pretty good turnover there because there is a 7 day camping limit.  Without the limit, I think it would be at maximum capacity over the winter months due to snowbirds making it their permanent home.  We set up camp at Site #4 ($10/night), then all piled in the tent to go to sleep so we could go to the "half zoo, half museum", aka The Sonoran Desert Museum, on Saturday.  As we were drifting to sleep, a coyote chorus serenaded the night skies. 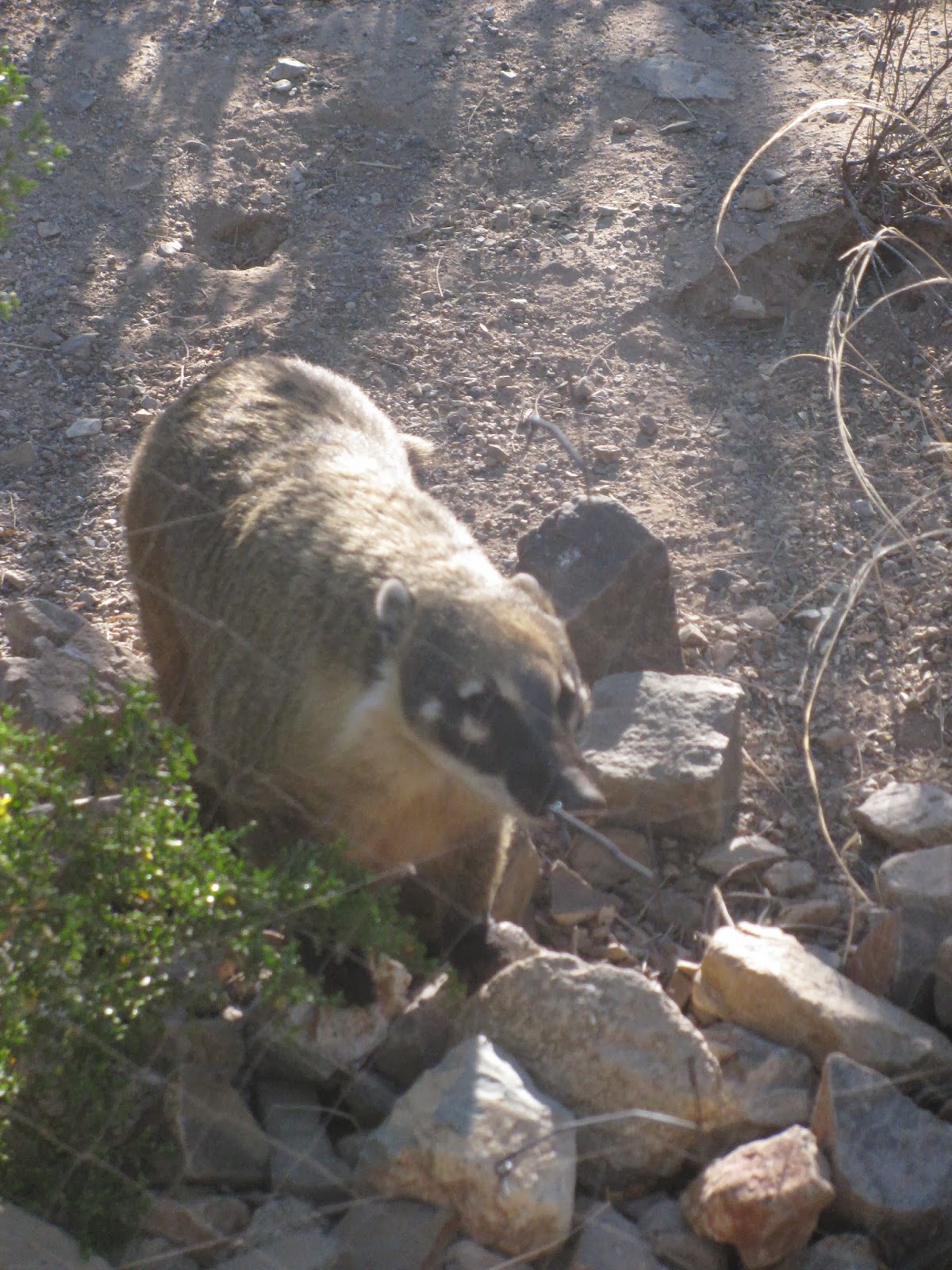 We arrived at the gate at 8:33.  The Sonoran Desert Museum opens at 8:30, so we timed our arrival nearly perfectly.  Along with our Tucson Book of Fun discount, we also got an Arizona Resident Discount, bringing our family cost to get in down to $21.50.  Not bad for a family of 5 (that said, two of them are two or younger).  A larger family, or one with older kids might do better by purchasing an annual pass, depending on how the math works out.  Our plan was to visit the animals first while they are more active.  We took the trail to Cat Canyon, saw a cougar up close and personal, visited the Mexican Wolves, then ended up at the Coatimundi exhibit.  The coatimundis are pretty cool looking creatures.  I think they look like a mixture of raccoons and badgers with a long opossum-like tail. 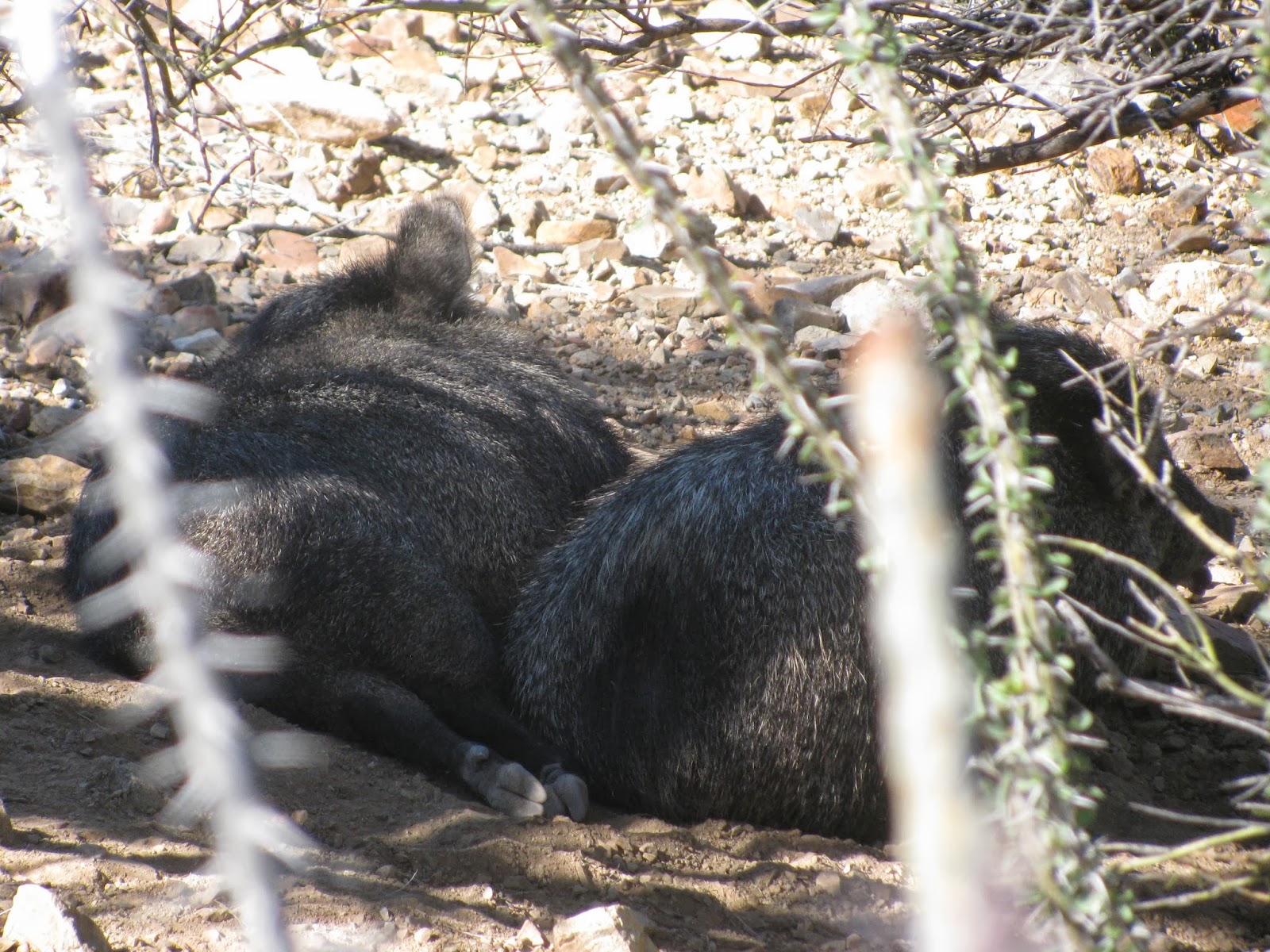 We then went down the trail to the javelina exhibit.  It's a big exhibit and the javelinas can be found several places as the roam.  Signs along the path point out areas they favor, increasing your chance of actually seeing them.  We found these two resting in the shade under some trees.   We passed the coyote exhibit, complete with coyotes pacing back and forth, then continued up the  hill to the restrooms.  One of the very nice and well thought details of the Sonoran Desert Museum is the sunblock dispensers in all of the restrooms.  If you visit and forget your sunblock, don't worry about it, you can lotion up in any of the restrooms throughout!  I think other large attractions, such as amusement parks, Disneyland, Sea World, zoos, etc could easily follow the Desert Museum's example and have sunblock dispensers as well.  It added a nice touch as we were reminded frequently enough that we didn't get sunburned. 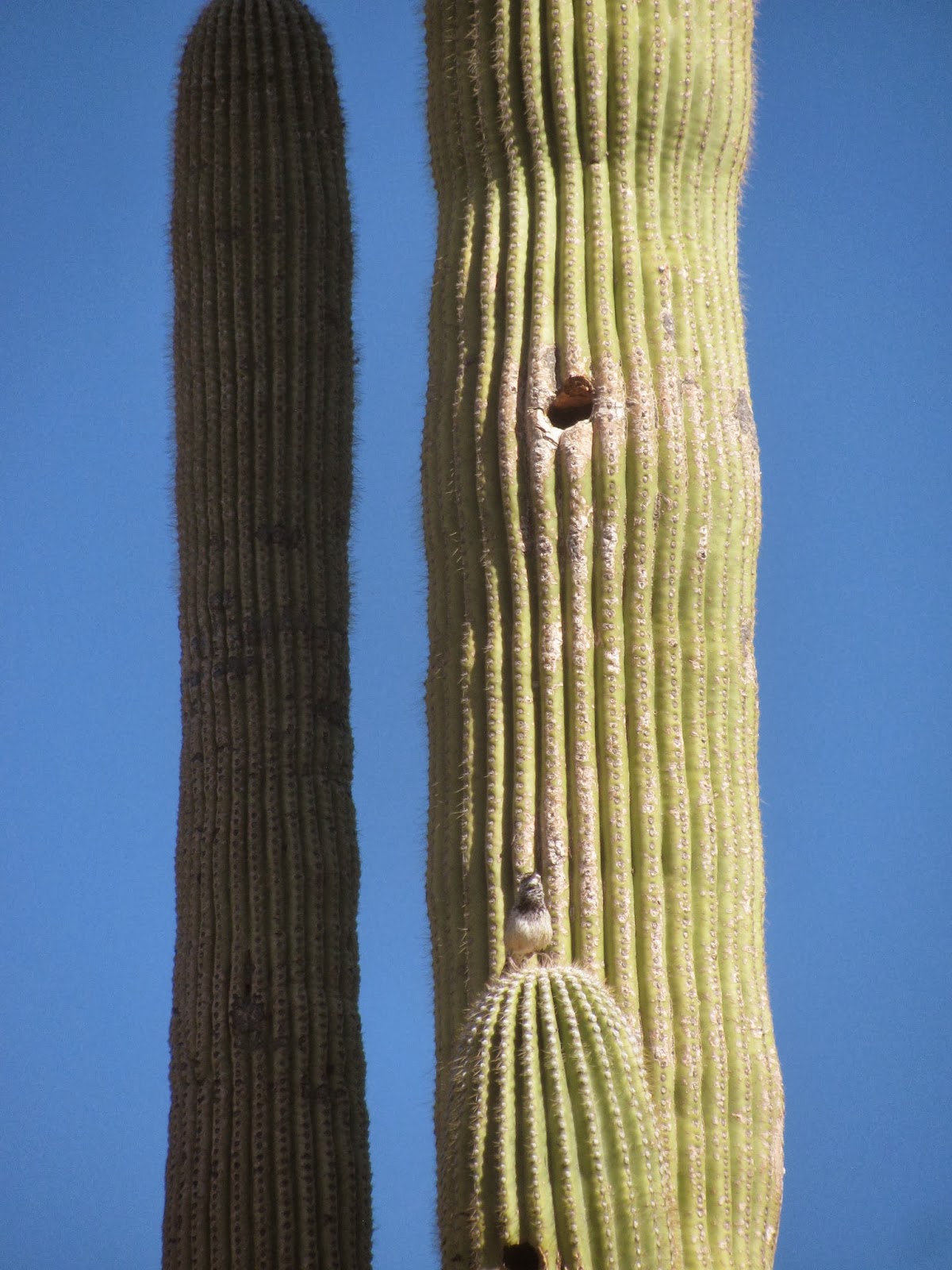 Here's a bird on a saguaro cactus.  There are plenty of Saguaros around the Desert Museum and Saguaro National Park is only a few miles down the road. 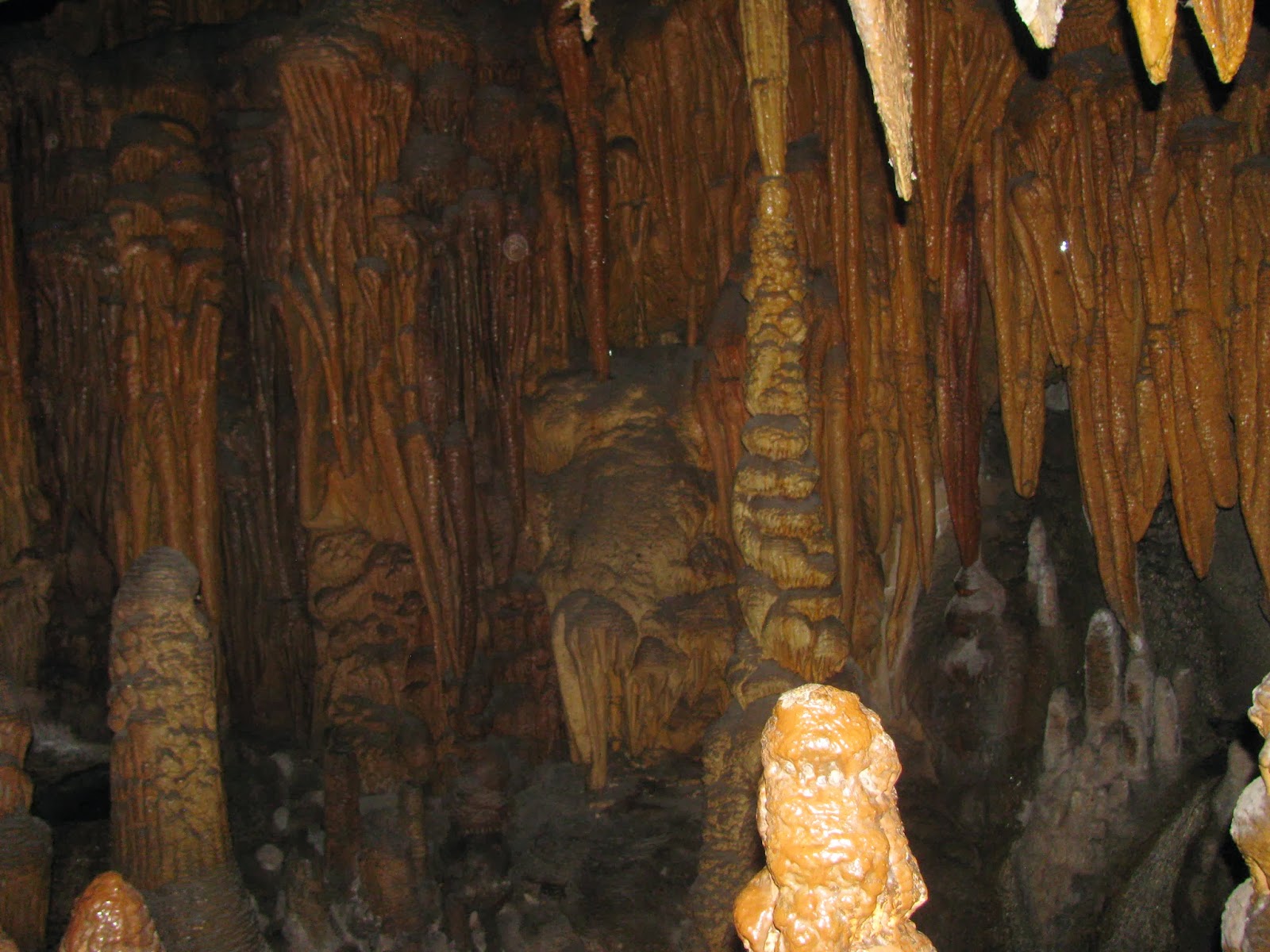 We really liked the cave exhibit.  There is a tunnel set up to give you somewhat of the experience of being a cave explorer.  My 4 year old LOVED the tunnel.  She did her best to persuade me to build one at our house.  Her argument went something like this "We could get one of these at our house and we could use our headlamps to explore it!  We would do it every day except for Sunday!"  I thought was cute, and showed that she's learning that we treat Sunday a little differently than the other days of the week. 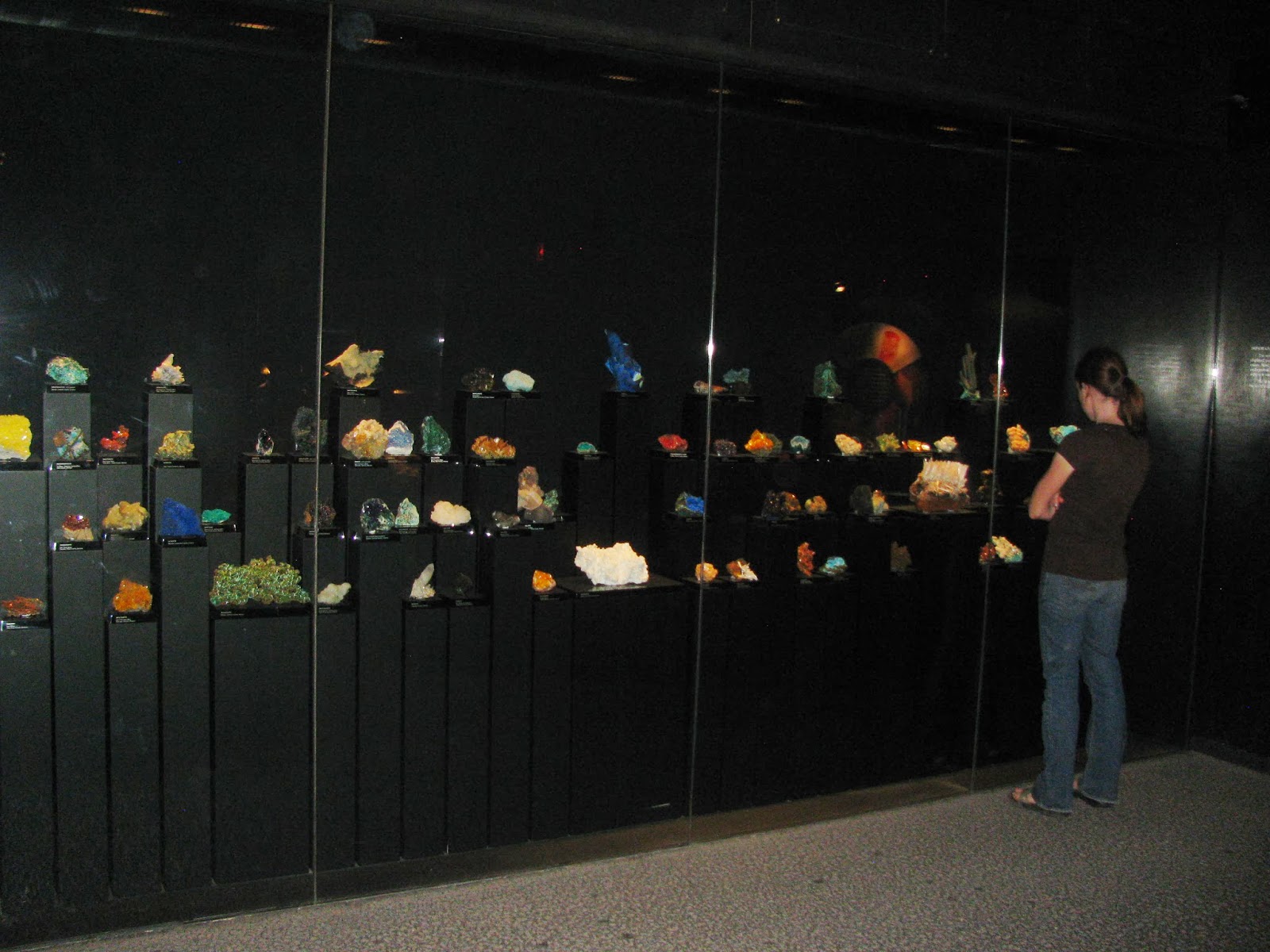 The Arizona minerals section was very cool.  There are a lot of pretty rocks.  We spent quite a bit of time looking at them. 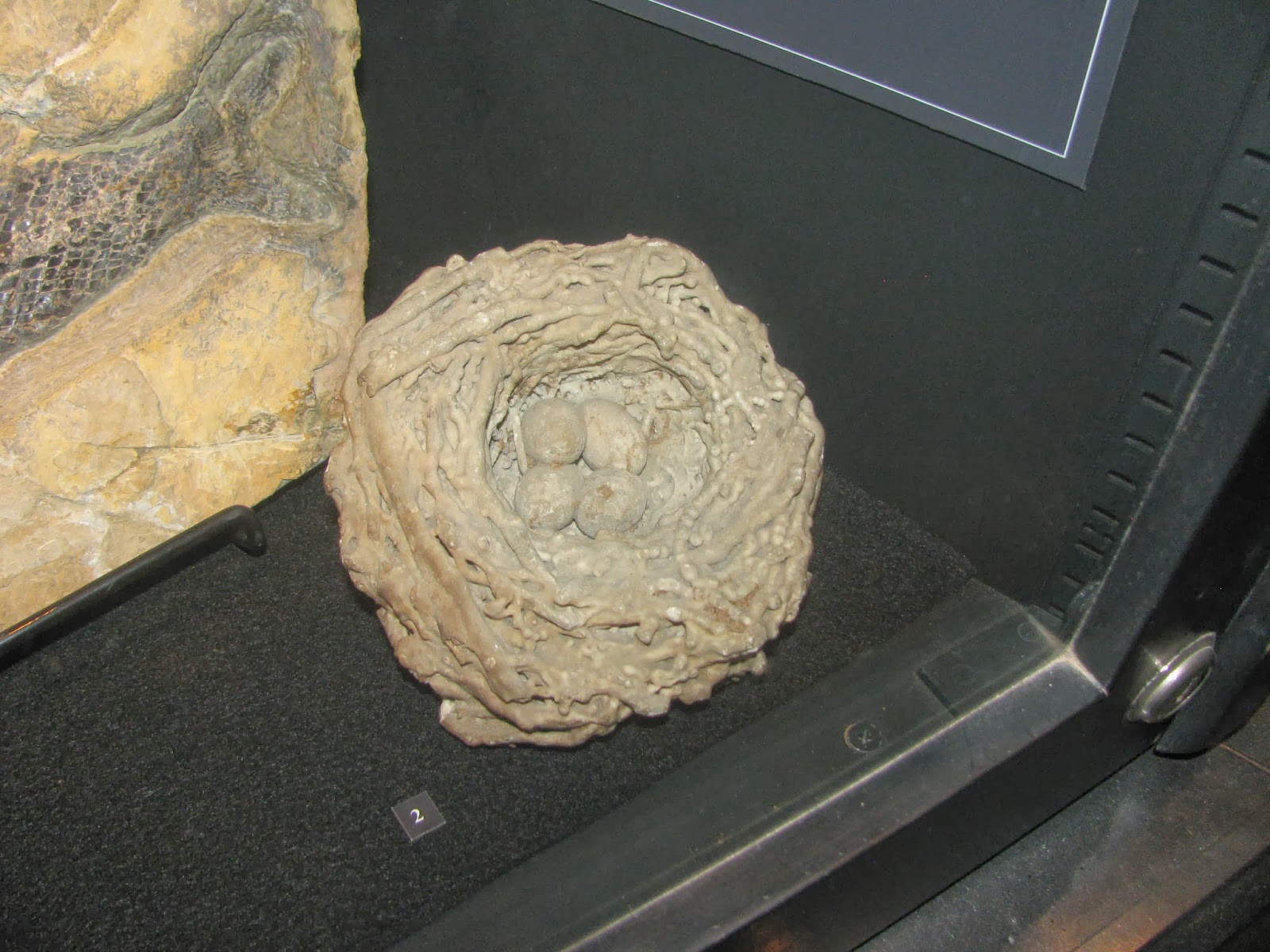 I really liked the fossilized bird nest, complete with eggs.  This was found in the Salt River Canyon, and everything in the bird nest has been replaced with calcite.  Totally awesome! 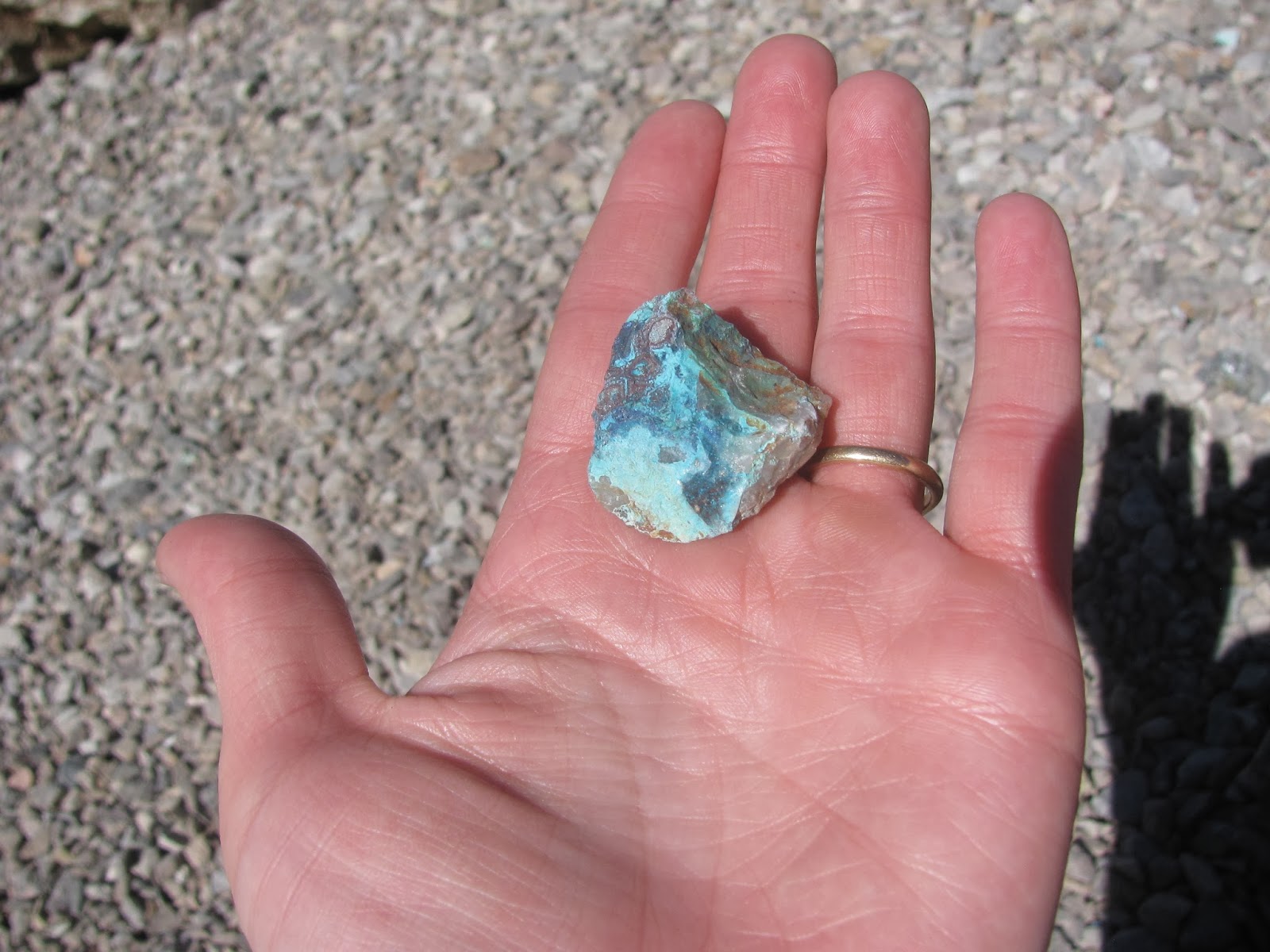 Outside the Rock and Mineral exhibit is a "mine dump" where you can dig around and find a rock to bring home.  I'm a sucker for the blue and green tinted rocks, so found one of them to add to my collection.  Azurite, Malachite, Chrysacolla- they're all pretty! 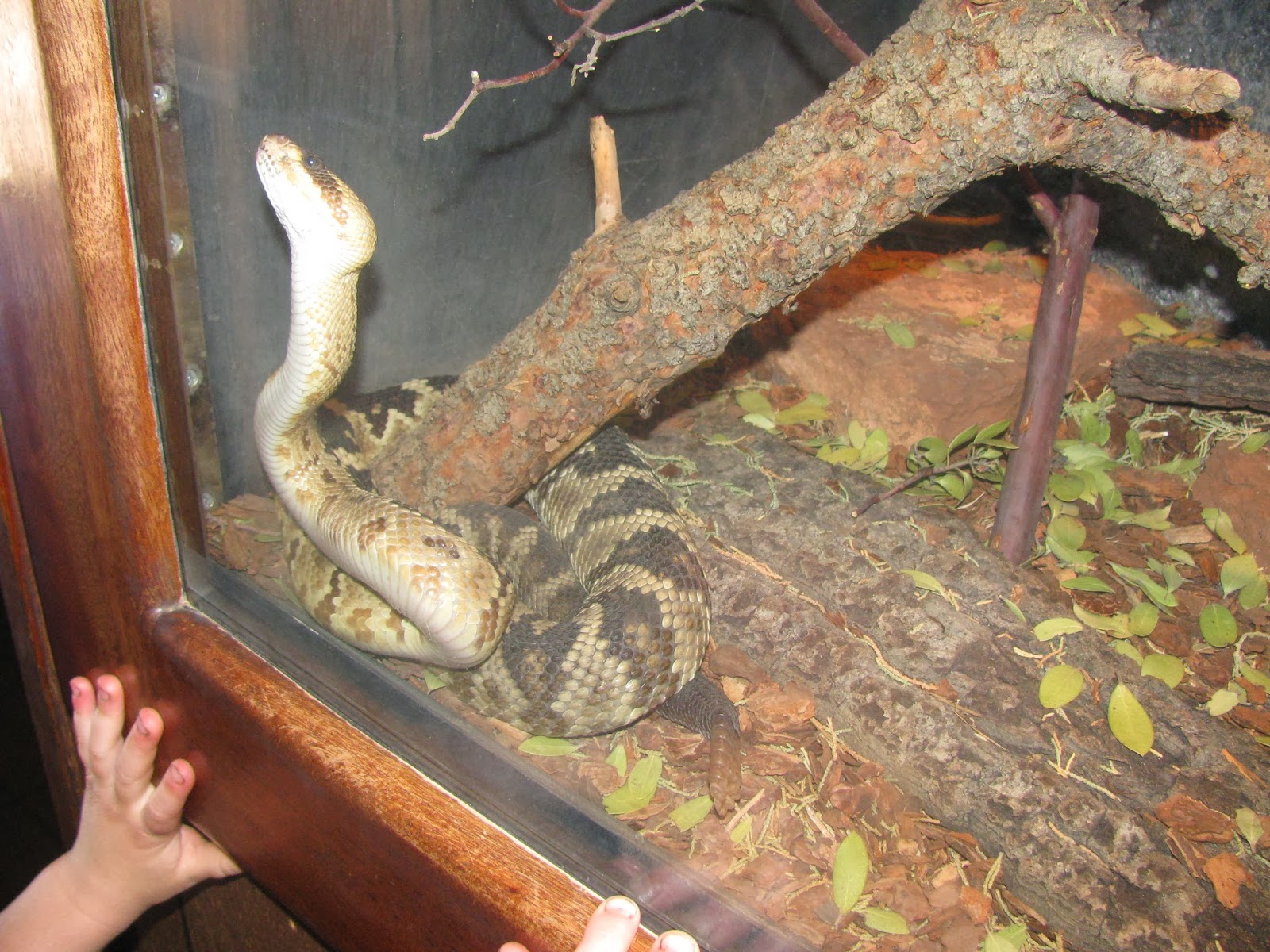 The rattlesnake hall was our next destination.  Most of the snakes were pretty still, but this one was really active.  I liked watching him move as he pressed his ribs against the glass, then moved them backward to propel himself forward. 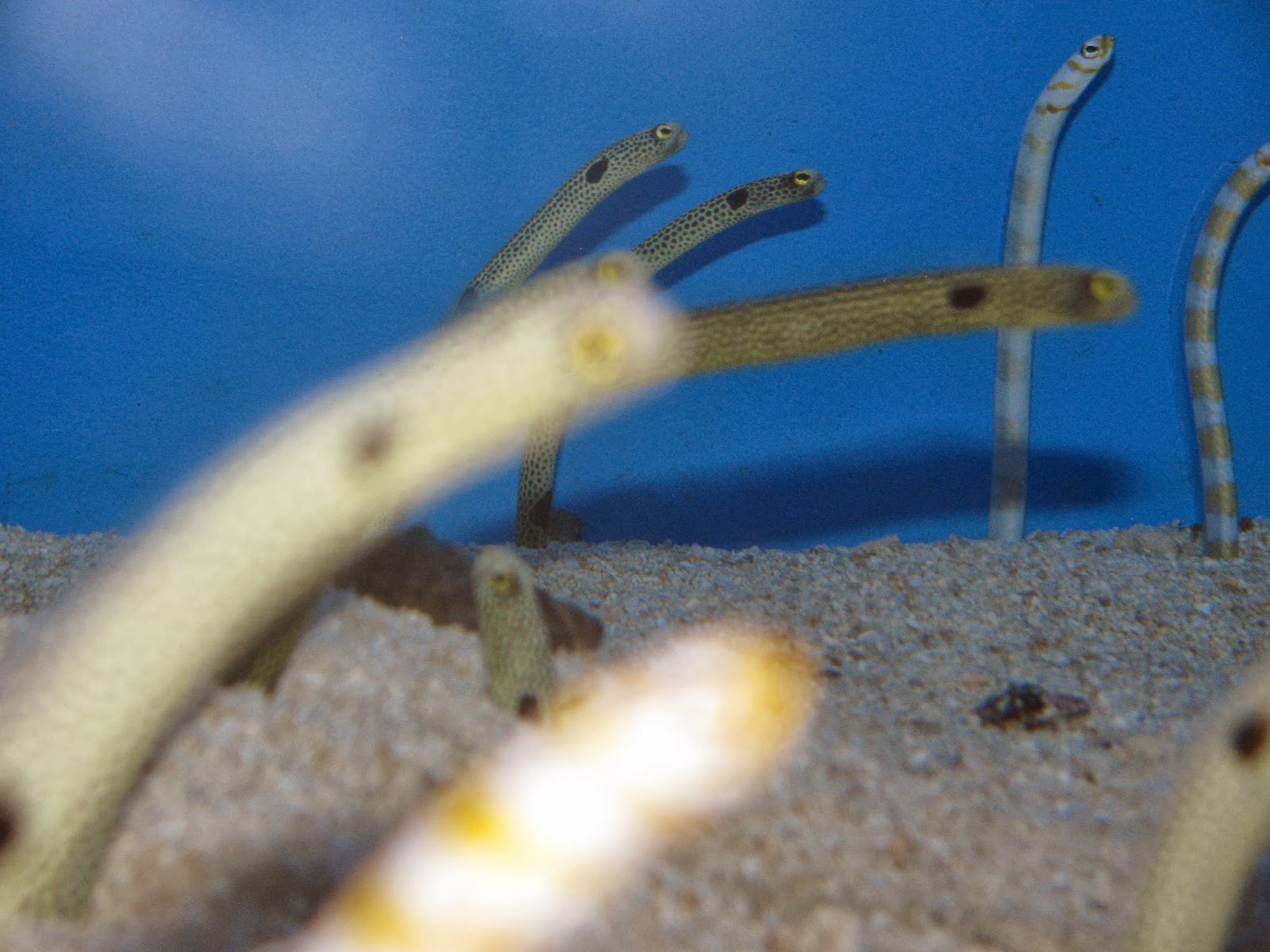 The aquarium was pretty fun too.  The Garden Eels were very unique.  Basically, the eels dig holes, then back themselves into them.  They can grab food as it drifts by, or pull themselves back into their homes to hide from predators. 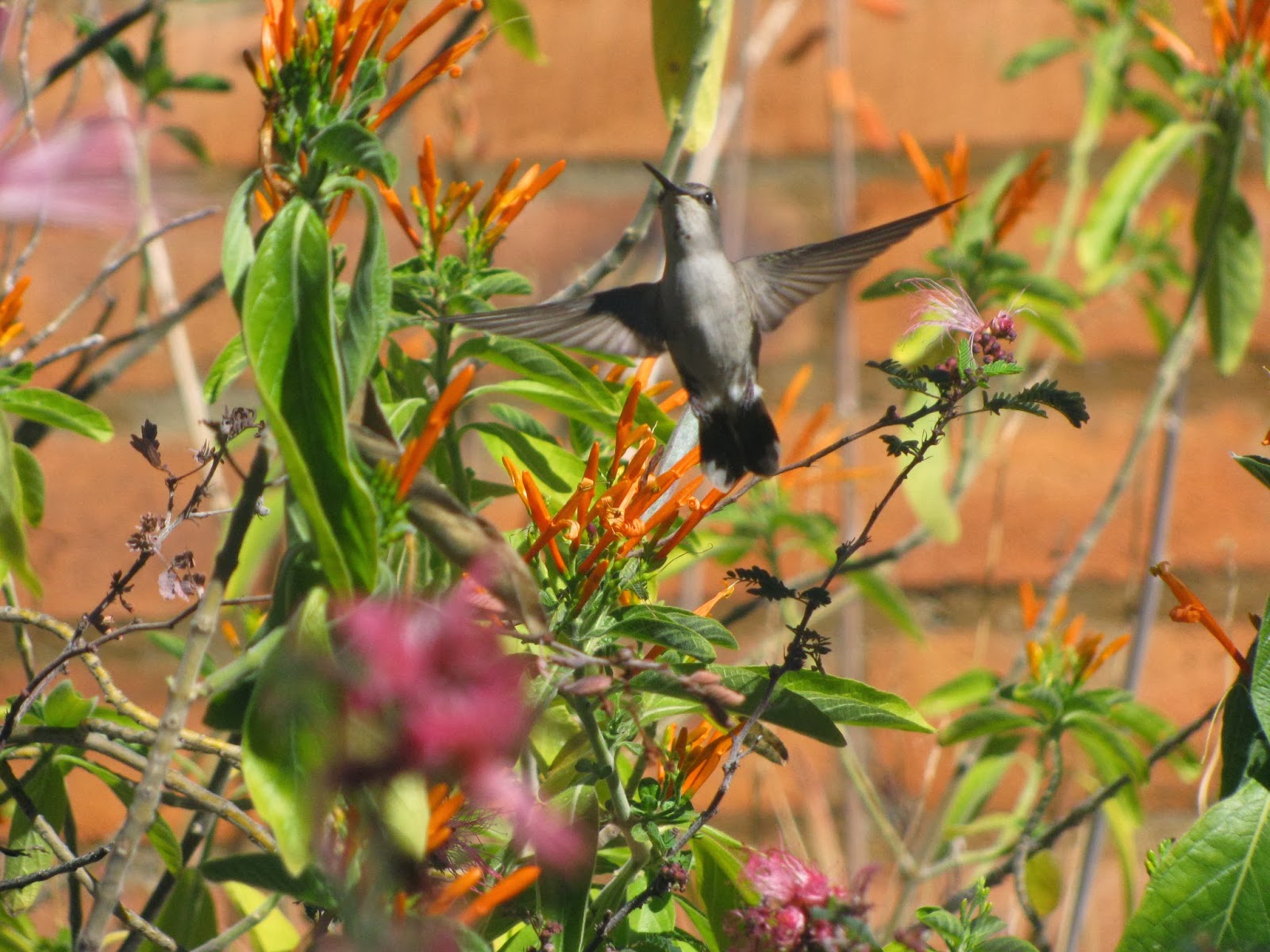 The hummingbird exhibit was another high point.  There's a large encaged outdoor room with lots and lots of hummingbirds inside.  There are several doors, and a hanging curtain to prevent the hummingbirds from escaping.  The birds fly around, have nests, and are really fun to see and enjoy.  It made me think somewhat of the Hummingbird banding at the San Pedro House in Sierra Vista. 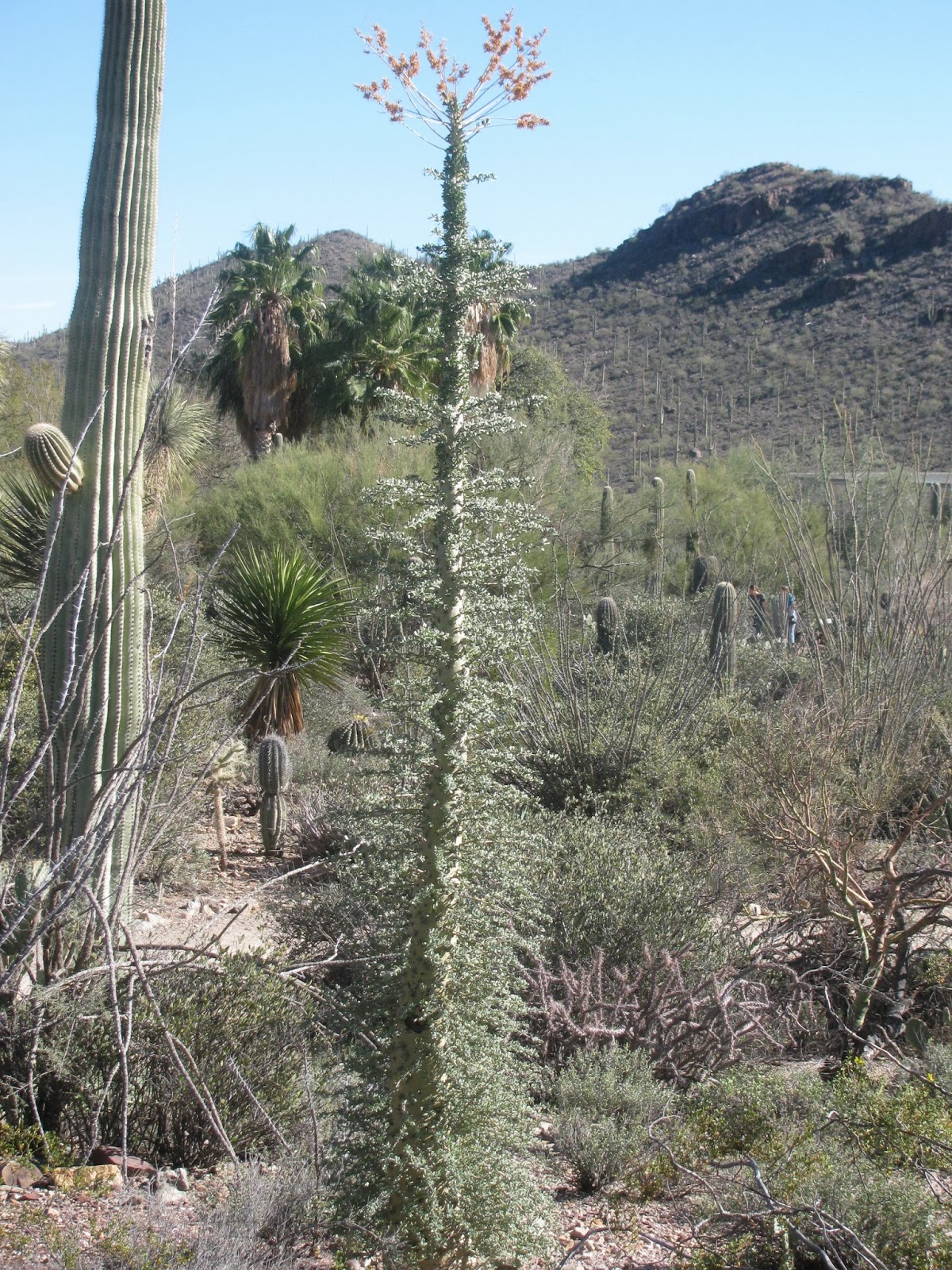 We also enjoyed the gardens around the museum.  I thought this Boojum was pretty cool.  It's shaped like a cone with little branches and is native to the southern end of the Baja Peninsula.  Is it a tree, cactus, or something else? 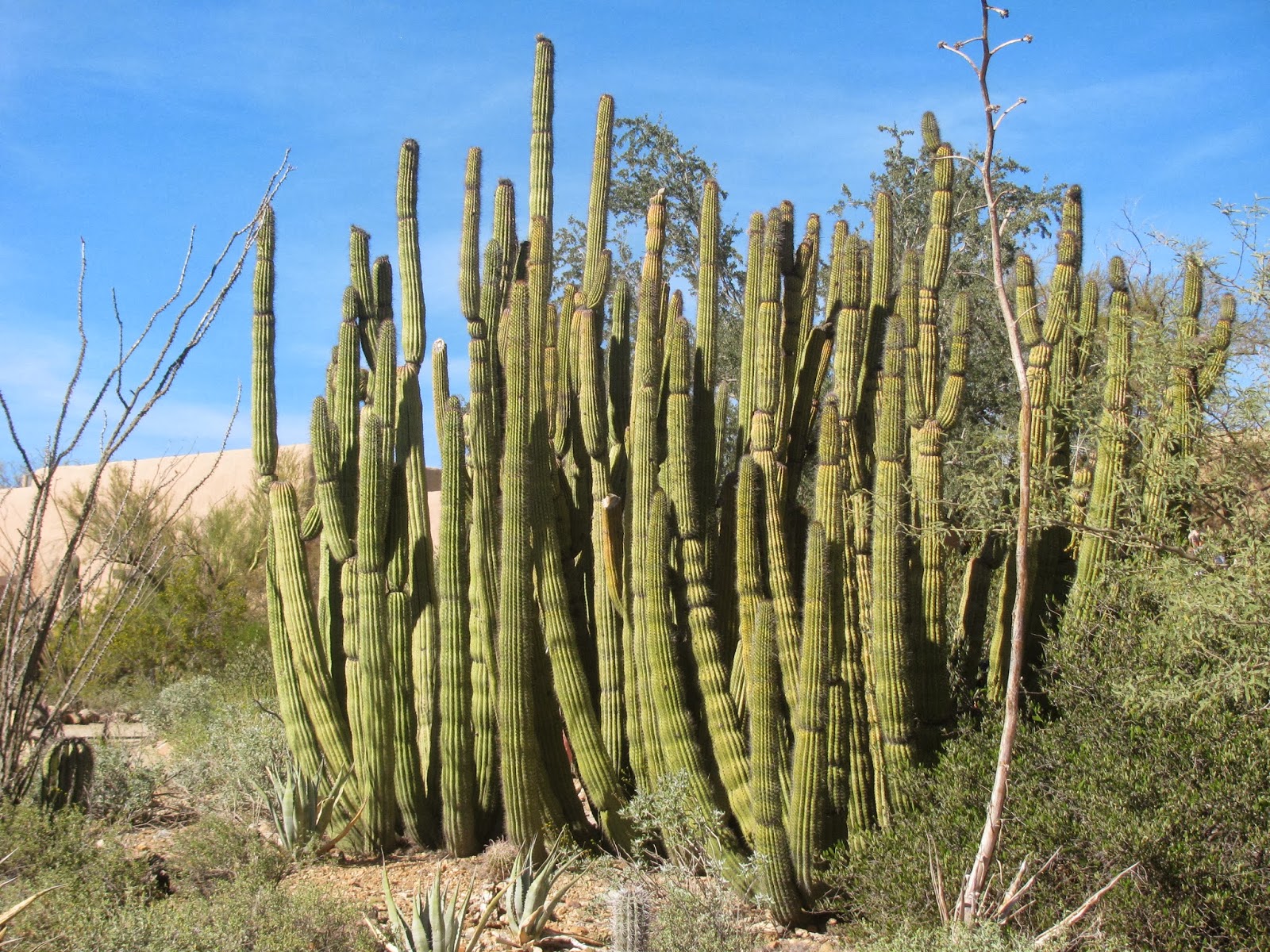 The Organ Pipe Cactus were really neat too.

There is a ton to see and do at the Sonoran Desert Museum.  We took 7 hours and enjoyed the whole time, and probably could have taken a little longer but the kids were tired and done, so we loaded up and headed back to our campsite at the Gilbert Ray Campground for dinner and some running around.