Hiking Kings Canyon Wash to the Gould Mine 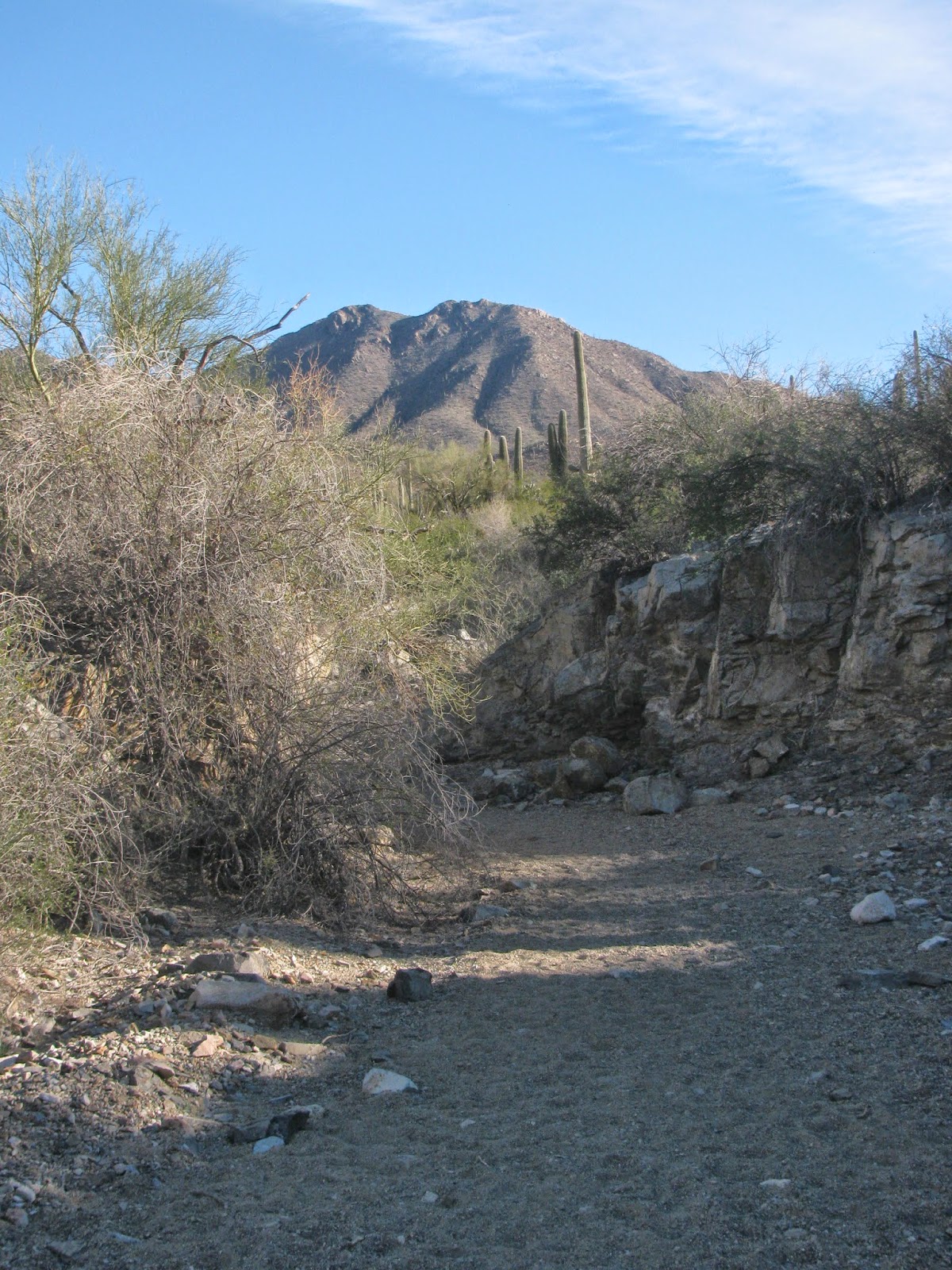 At Saguaro National Park I picked out 2 hikes that we had to do.  One was to the Gould Mine, the other was to see the Signal Hill Petroglyphs.  I picked the hike to the Gould Mine because it sounded like a cool end destination.  I discovered that the best parts of the hike are along the way.  The trailhead is actually located in Tucson Mountain Park, nearly across from the Sonoran Desert Museum, but within 100 yards an invisible boundary is passed and you are on National Park lands. 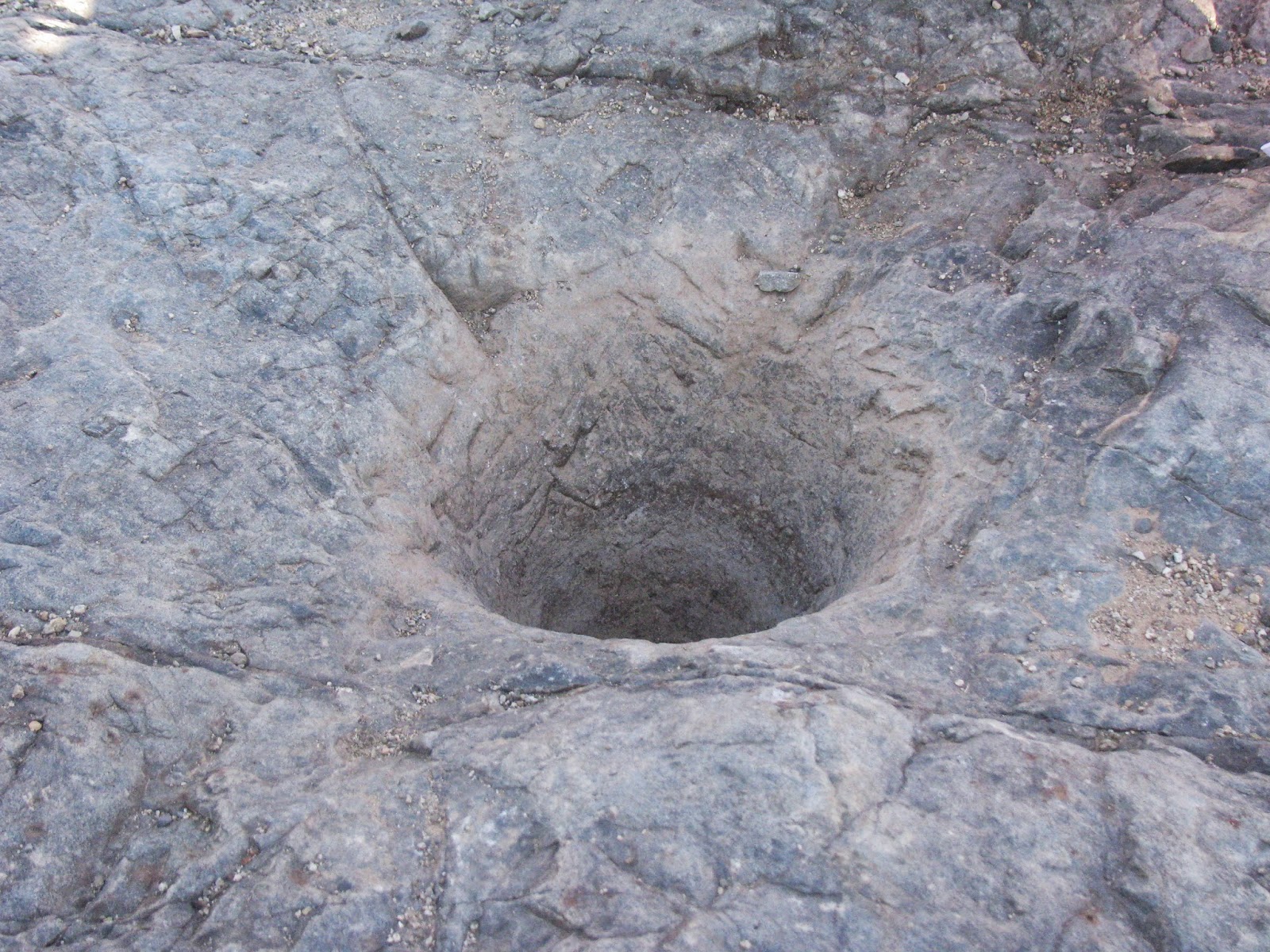 We left the trailhead and intended to take the shortest trail to the Gould Mine, but we missed the turnoff somewhere and ended up in Kings Canyon Wash.   It's a tough turnoff to find- I didn't notice it on the return trip.  I was ok with going up Kings Canyon wash, it would just make our hike about 1/4 mile longer.  While we were at the visitor center a day or two before the hike, I picked up a brochure on Those Who Came Before.  The brochure mentioned Hohokam Indians, Spanish Missionaries, and Cowboys and Miners.  It's really a simple brochure that doesn't elaborate on much other than having a short paragraph about each group.  The Hohokam paragraph mentioned grinding holes in washes that were used to grind mesquite beans.  At the time, I thought it would be pretty cool to find one in Saguaro National Park, but didn't think much more about it.  On our hike, a short while after starting up the wash, we found one of the grinding holes in a rock outcropping right in the bottom of the wash!  We kept hiking, enjoying the desert vegetation and the peaceful morning. 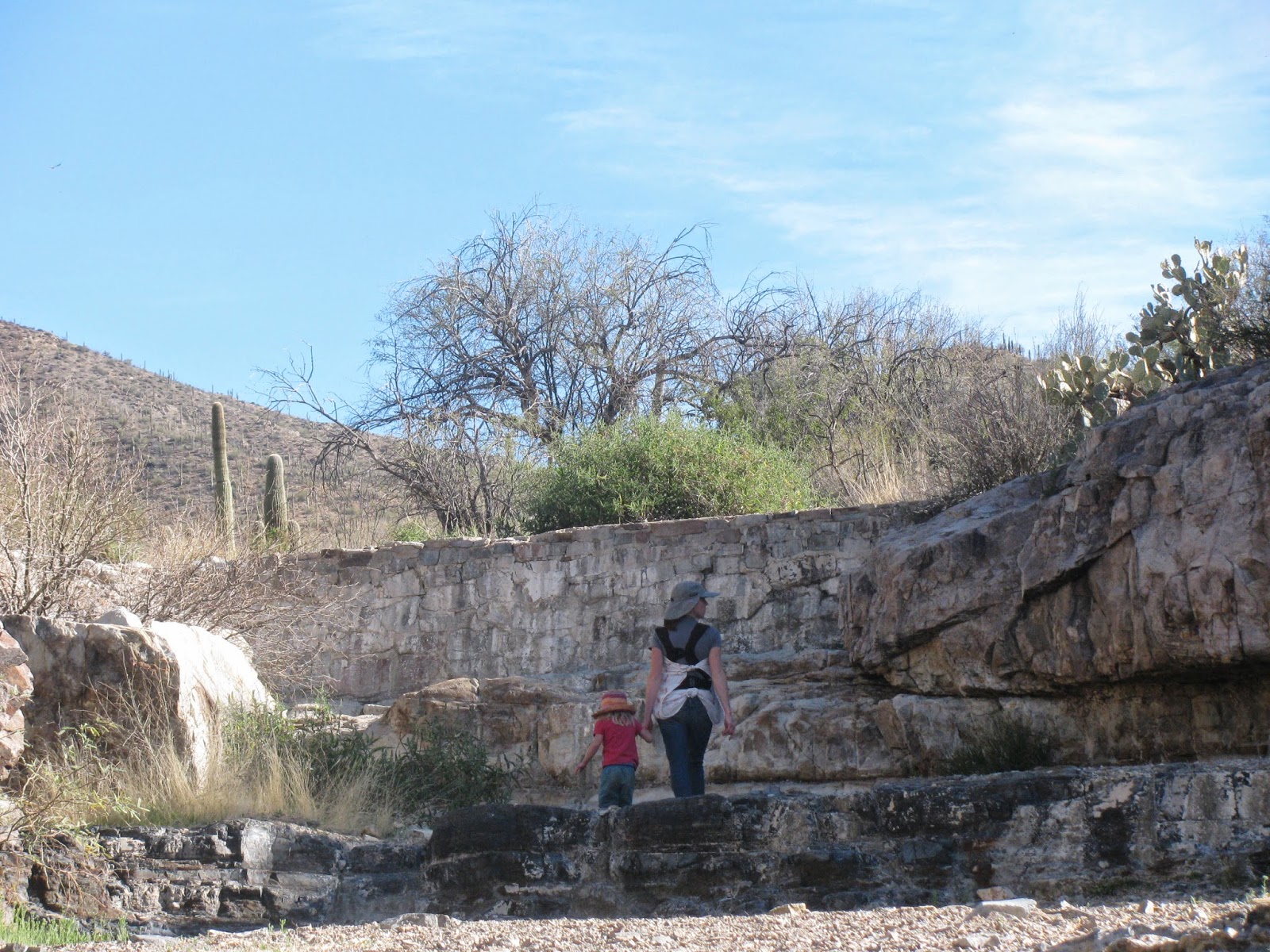 After several bends in the canyon, slogging up long sections of sand and gravel, and scrambling over several other outcropping ledges, with no traces of other grind holes, we came to a dam.  There were bees buzzing at the base of the dam where water seeped out of a crack, at what I can only assume has become a pretty reliable water source.  The kids were ready for a break, so we sat down away from the buzzing bees for a drink and a snack. 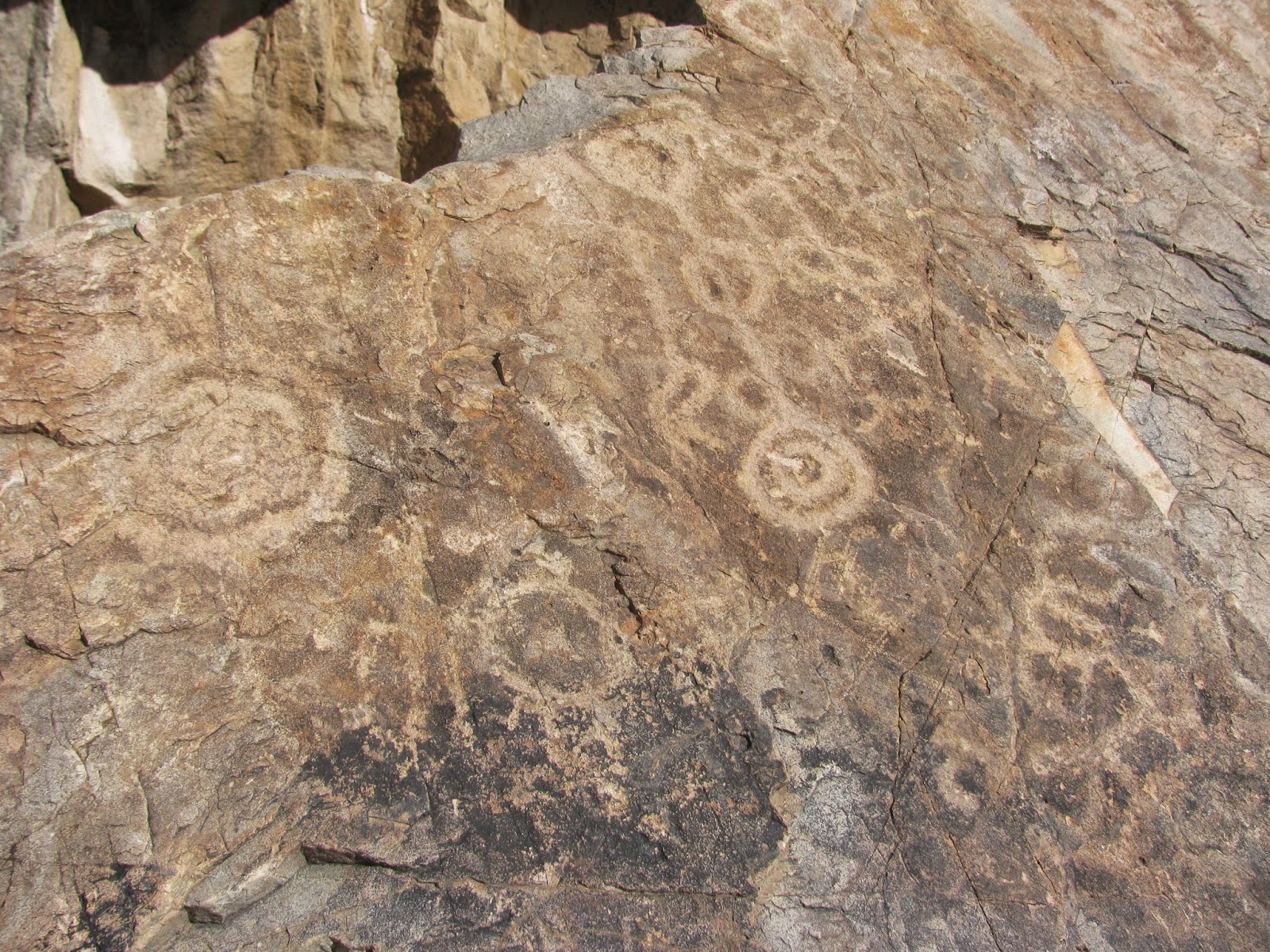 As we were resting, we looked around and realized that there were petroglyphs- a lot of petroglyphs all along the rocks near the dam.  We hurried and finished our break, then spent the next while scrambling around the boulders and ledges looking for ever more petroglyphs. 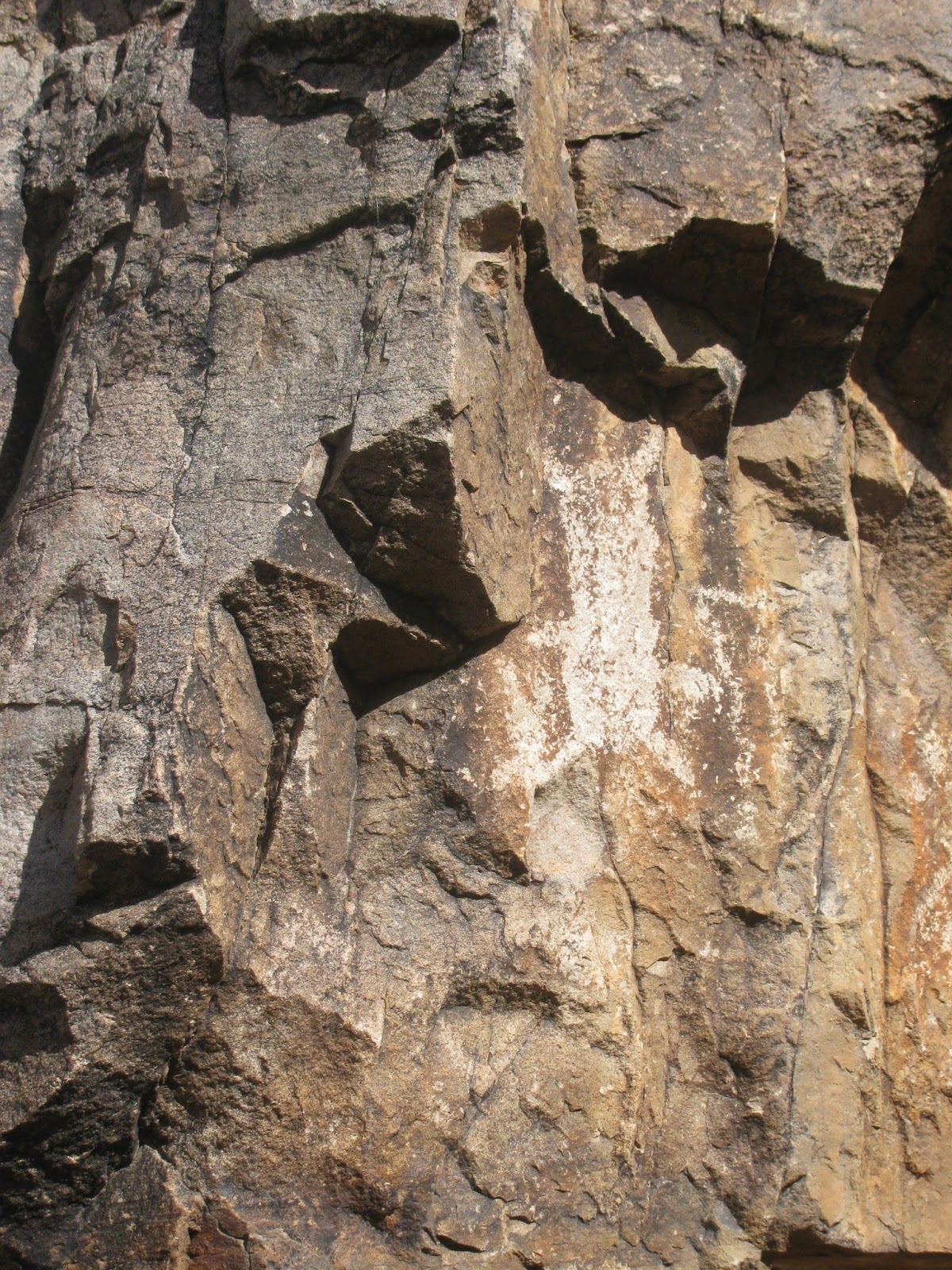 We found quite a few!  I'm sure there were many others that we missed.  Just past the dam, the wash trail met up with the Kings Canyon Trail. 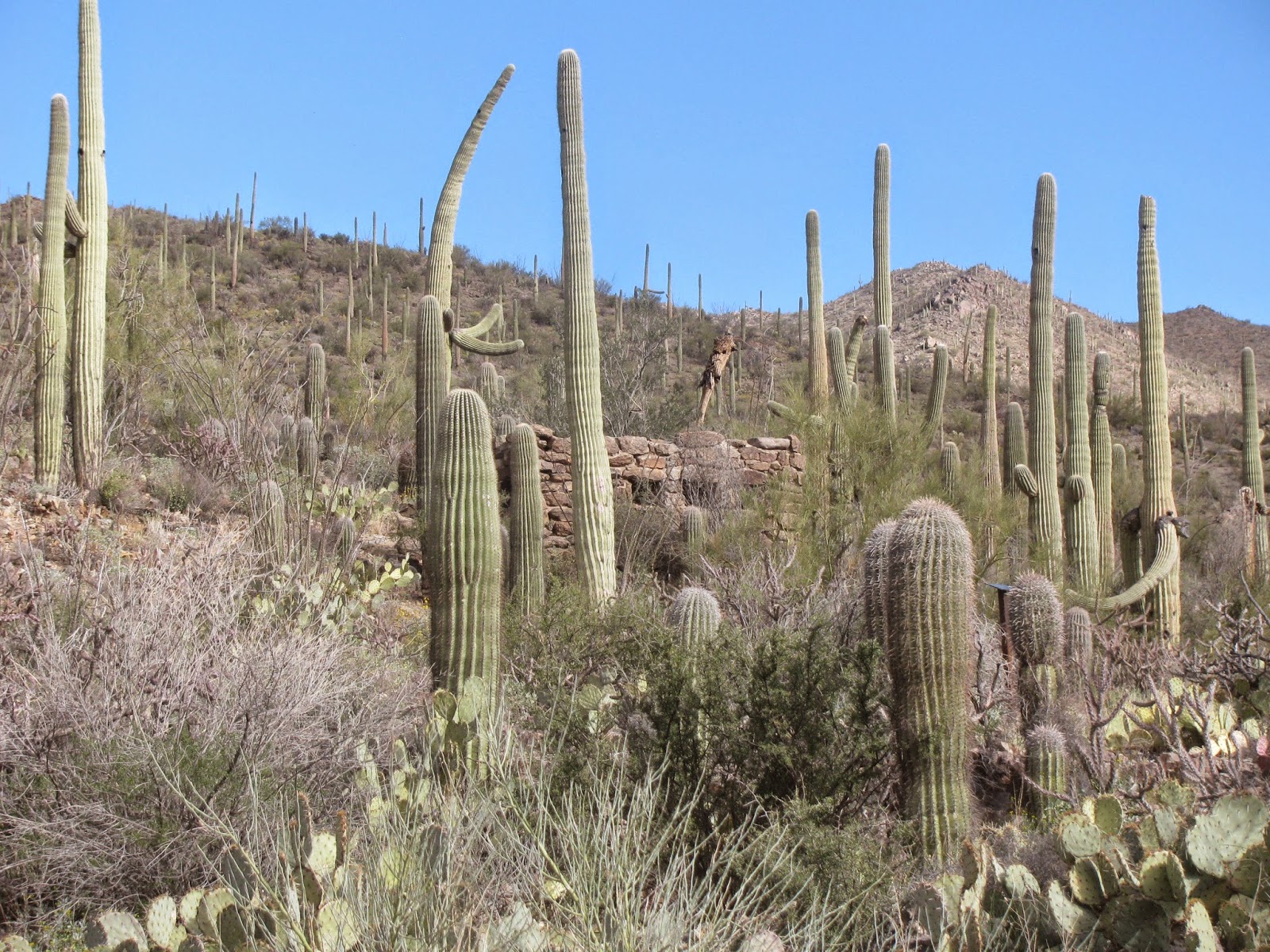 Off on the hillside we saw a small rock building.  It didn't look like the mine since there were no tailings piles around.  Can you spot the building? It had only two small rooms, so we continued on. 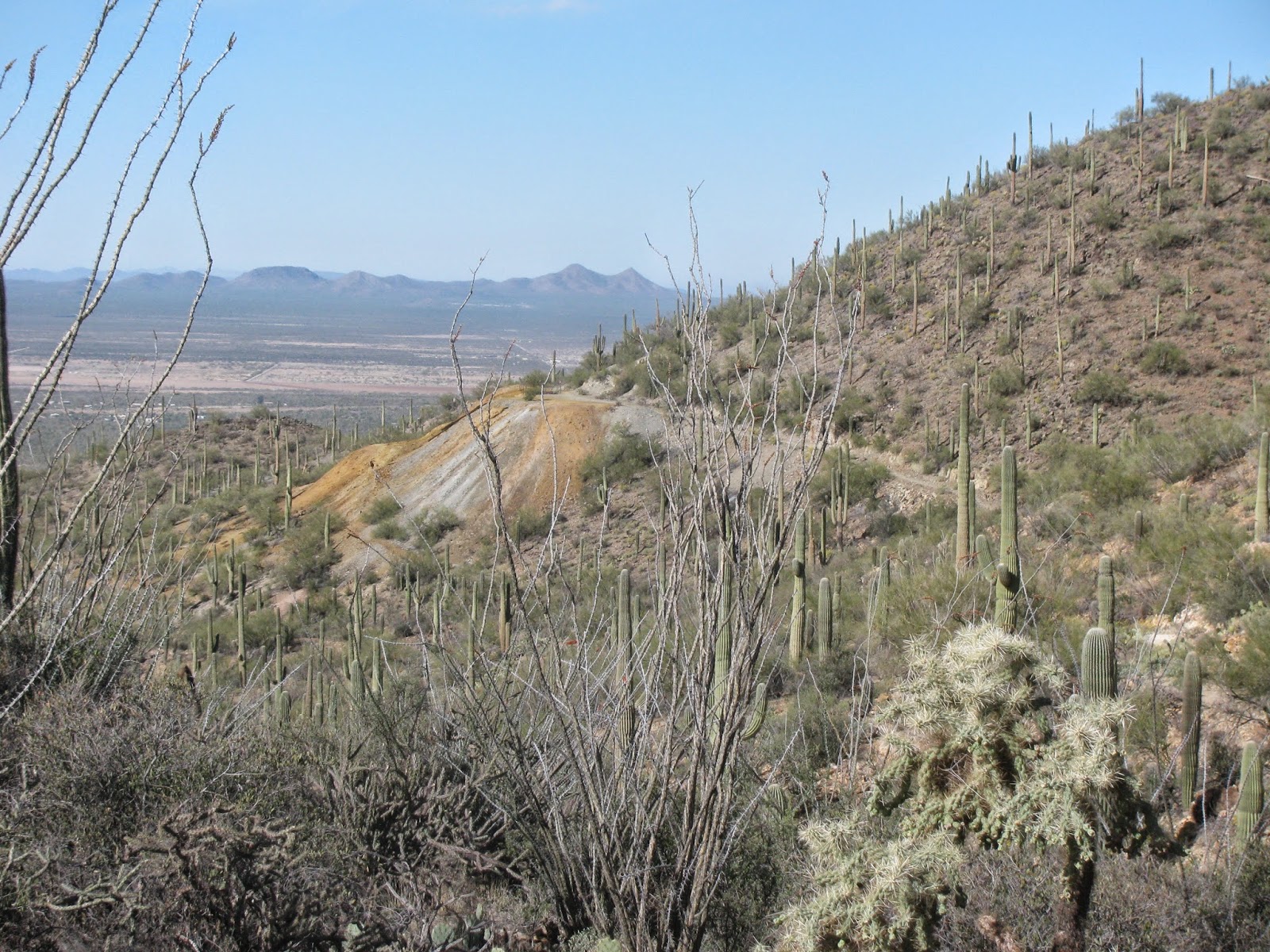 We hiked over a small ridge and down into the next small canyon, where we saw the Gould Mine.  Down the trail we went- our end destination finally in site.   The Gould Mine was a copper mine that only gave about $9000 in profit after all expenses were paid.  The tailings pile looks pretty big, so we lengthened our stride. 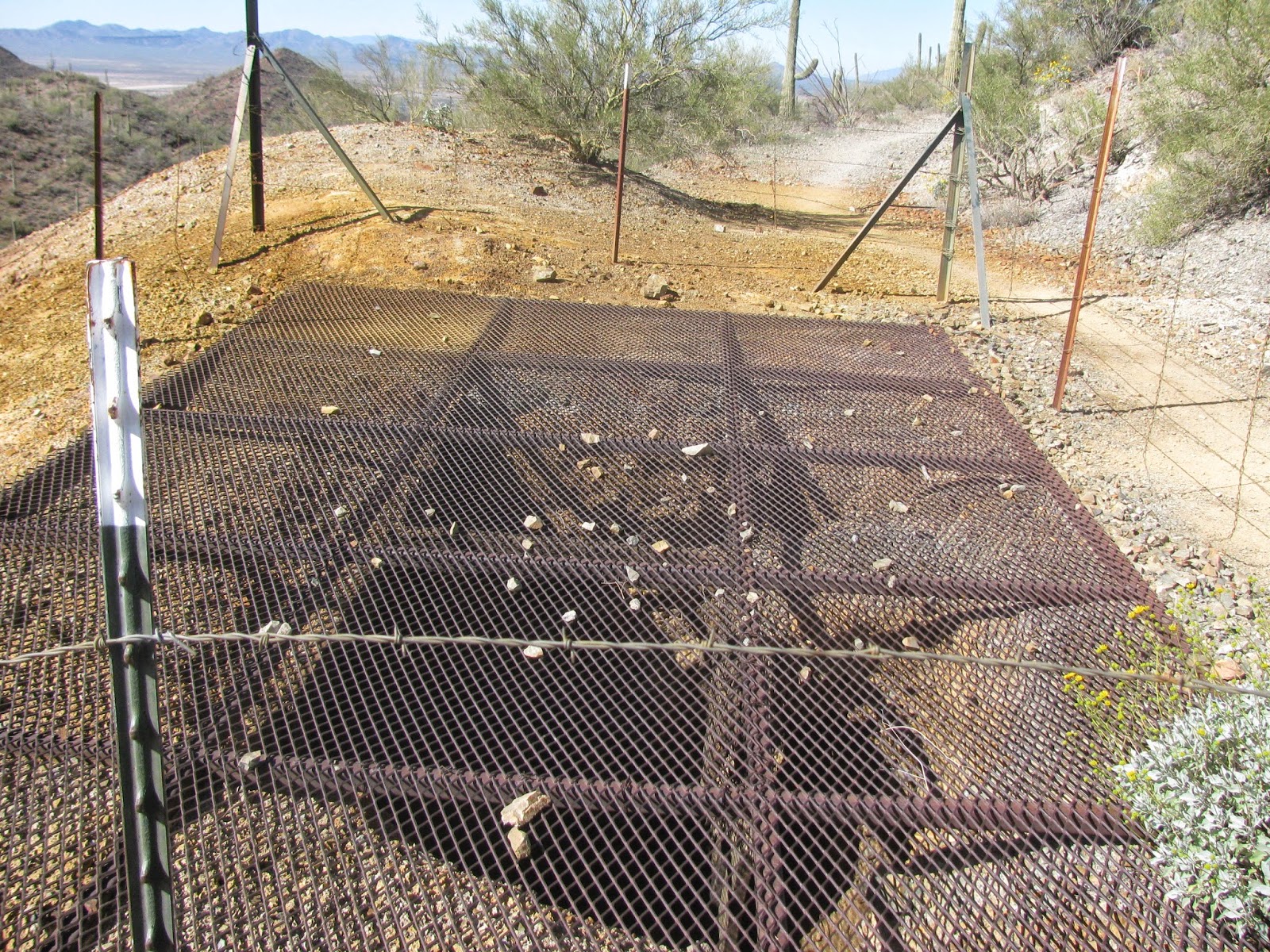 At the mine there's a large shaft which has a grate covering the entrance and a fence of barbed wire surrounding it.  There's a small building off to the side that the desert is trying to reclaim.  We saw a few other small tailing piles nearby from what we could only assume were other prospects. 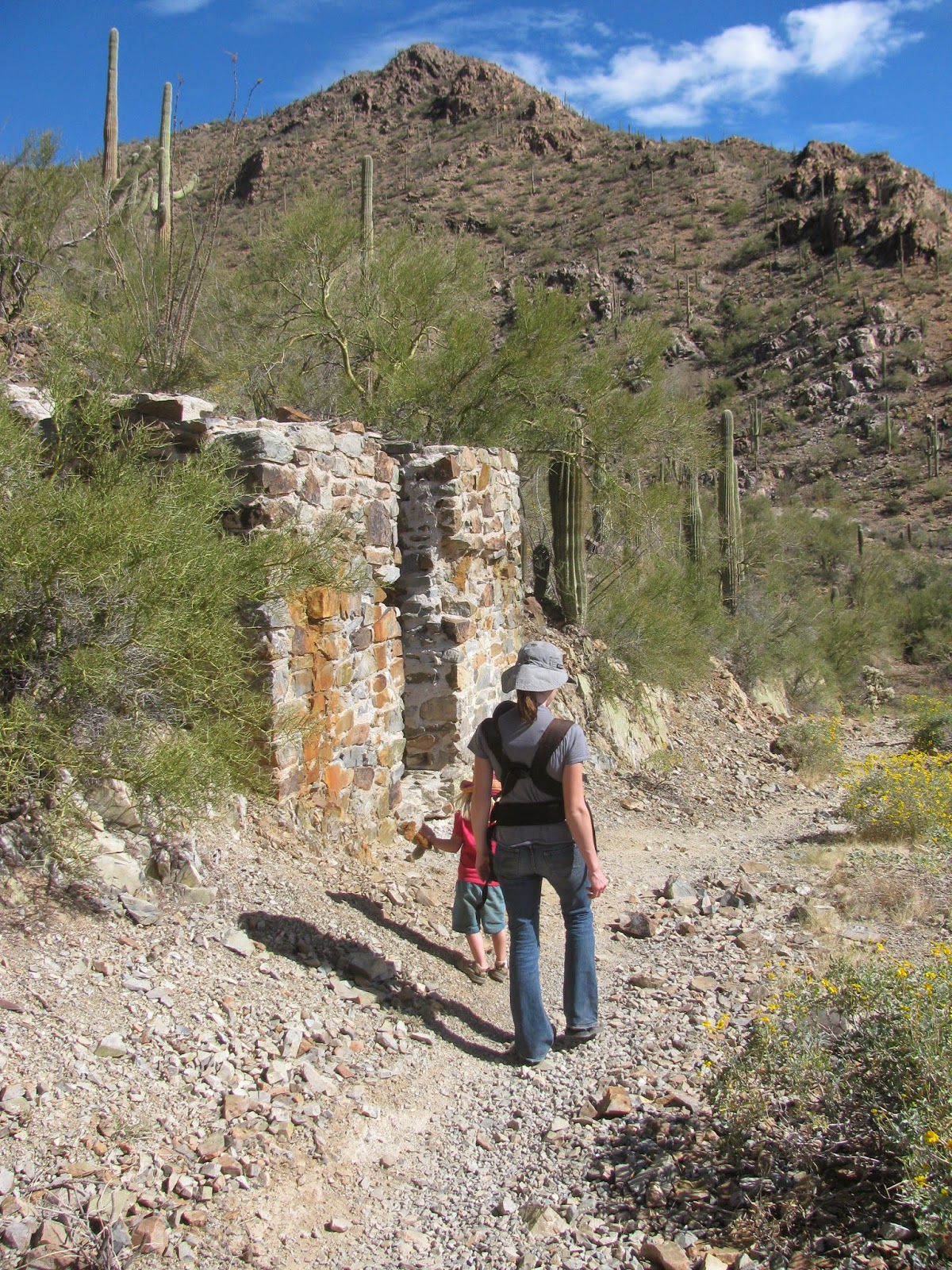 After walking around the top of the tailings pile we turned back for the 1.3 mile trek back to our car.  The kids were tired, so we took the Kings Canyon Trail on the way back.  It's wider and better maintained then the wash trail was, but we enjoyed the wash trail on the hike in a whole lot more.  I would have to say that the Kings Canyon Wash Trail to the Gould Mine is definitely one of the best trails in Saguaro National Park for kids.  I enjoyed it along with everyone else.