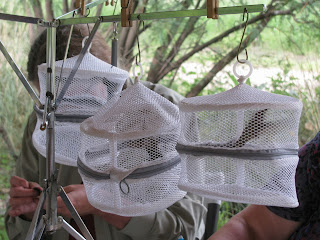 Sierra Vista is known as the Hummingbird Capitol of the US.  For good reason too.  There are lots of hummingbirds that make this area their home.  In fact, the single day record for number of hummingbird species sighted occurred near here when some lucky birder identified 14 different species of hummingbirds.  Another unique opportunity found here is holding a hummingbird. 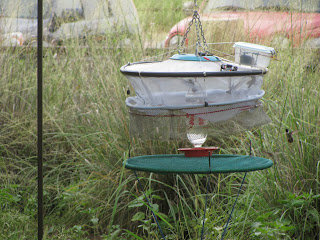 Every year during the warmer months, except in the middle of summer when the hummingbirds are nesting, the Southeast Arizona Bird Observatory conducts hummingbird banding sessions at the San Pedro House, located near the San Pedro River.  Several avid birders get together, and some trap the hummingbirds with radio-controlled traps, then they bring them to another station where they are weighed, measured, and banded. 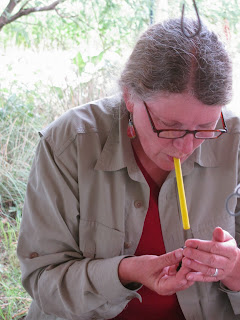 Here one of the birders is blowing aside some of the feathers on a hummingbird to check on the bird's health.  After this and several other items of data are collected, the bird is banded, then fed, then lucky observers get to act as a Launchpad for the birds to fly away from. 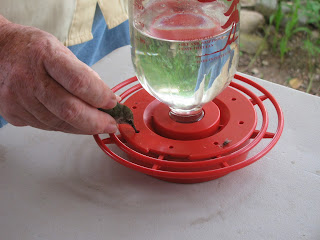 We've been down a few times, and have discovered that the best way to get to release a hummingbird is simply to show up early.  Arriving about half an hour before the event starts, you'll beat the crowds.  Then when the volunteers start arriving, they hand out numbers on a first-come, first-served basis.  The lower the number, the better the odds you have of holding a hummingbird. 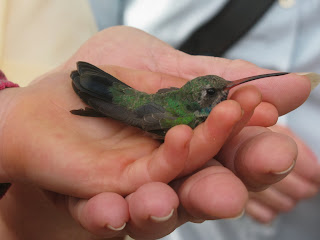 We got to hold broadbilled hummingbirds.  The day we went, they were having no shortage of birds, so were cherrypicking the broadbilled over the more common (in our area) black-chinned hummingbirds.  There were about 2 dozen birds that were banded, but othertimes there are not as many.  Even little kids can hold a bird, depending on their maturity level and the trust the volunteers have.  It's pretty cool to hold them and feel them quivering in your hand before they fly away!  Some of them, like this little guy, stay on for several minutes, while others remain for only a few seconds before they are gone.