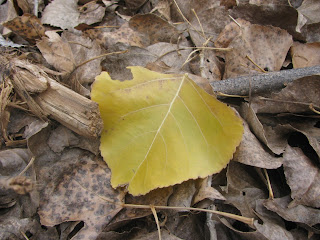 Late December and there's still a few yellow leaves blowing around.  It's definitely a nice change from the snow!  When we first moved to Arizona, I took a little hike to the Millville Ghost Town located across the river from Charleston.  One of the signs there mentioned Charleston and that the BLM didn't encourage people to go visit it.  In my mind that is very different then discouraging people from visiting it!   Encouraging is having a trailhead, pit toilets, and interpretive signs, and maybe some literature around town with directions on how to get there.  Not encouraging means that you don't have any of that.  Discouraging means making it difficult or impossible to go there.  So "not encouraging" is a good thing!  I did some digging around, then picked a Saturday to go explore the town. 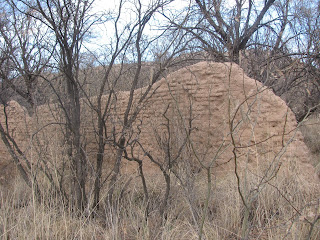 We parked in the parking lot at the San Pedro Bridge on the Charleston Road, crossed the river on the footbridge, then followed the foot trail north for a mile or so to the ruins.  We ended up leaving the creek bed a little bit early, so I'd encourage those who follow to follow the stream bed until you see a concrete railroad bridge, then exit the streambed on your left. 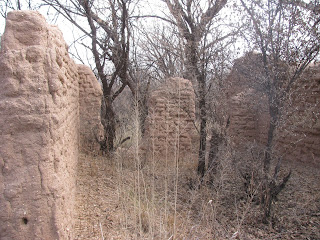 Charleston was a milling town, essentially existing to mill and process the ores mined in Tombstone and nearby.  When the mines hit water, the reason for the town being there ended, and it had a slow decline until it became a ghost town.  It's now overgrown with mesquite and desert vegetation, but there are plenty of walls still standing of numerous buildings.  Now for the reason the BLM doesn't encourage visitation:  the Army used it to practice urban warfare while training soldiers in World War 2.  Because it was used as such, there's a small risk of live munitions in the area.  Metal detecting is prohibited.  They don't want you to blow yourself up.  We didn't see anything, and if you're just walking around you're probably not going to find anything you don't want to mess with, but there's still a chance.  If you go, have fun and be safe!