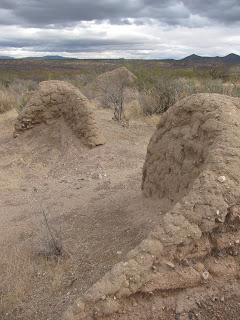 I've really enjoyed the additional viewpoints on history that I've gotten here in Arizona.  In Utah, almost all of the history revolves around Brigham Young and the Mormons, which to be fair were enormous contributors to the settling of the west.  They even have towns (St. David) here in Southern Arizona that were settled by them.  But, there is more history out there.  Some of it even pre-dates the Mormons arrival in the mid 1800's.  One of the oldest of the local sites, dating back to 1776, is what I call the Presidio.  It's full name is the Presidio Santa Cruz de Terrenate, but I find it easier just to call it the Presidio. 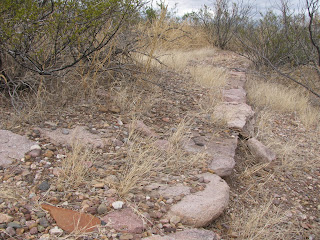 The Presidio (or Fort) was established by an Irish mercenary named Hugh O'Connor for the King of Spain.  It only lasted for about 4 years before the Spaniards abandoned it because of the frequent Apache attacks.  The same time that America was beginning, and the English version of history is just beginning to reach west from the Atlantic coast, the Spanish were well established in the Southwest.  It's more common to think of the Manifest Destiny and the great unknown vastness of the continent awaiting to be explored then it is to grab hold of the facts that parts of the southwest on over to California were settled and tamed already. 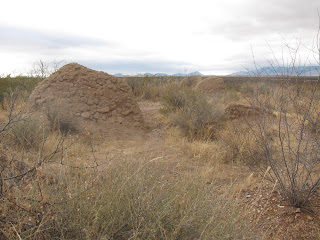 The fort is just ruins now, mostly foundations, with several wall sections still standing.  But sadly, most of the wall sections are not original, but instead have been rebuilt to compensate for the southern Arizona monsoon rains that so eagerly erode soil and dirt.  If you visit the site, you will notice plastic embedded in the walls.  The plastic is a line of demarcation- below the line are the original walls, above the line is the rebuilt efforts which have been added to protect the layers below. 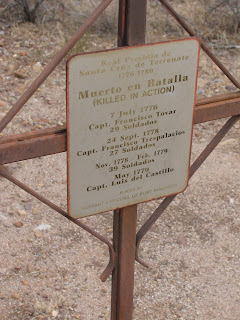 There's a monument to soldiers killed by the Apaches, as well as interpretive signs and a walking tour. 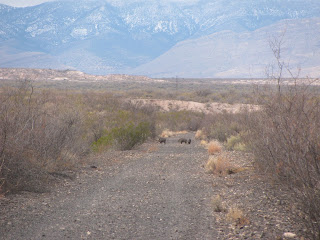 On the way back to the trailhead, as we walked along the old railroad grade, we saw a small herd of javalinas off in the distance.