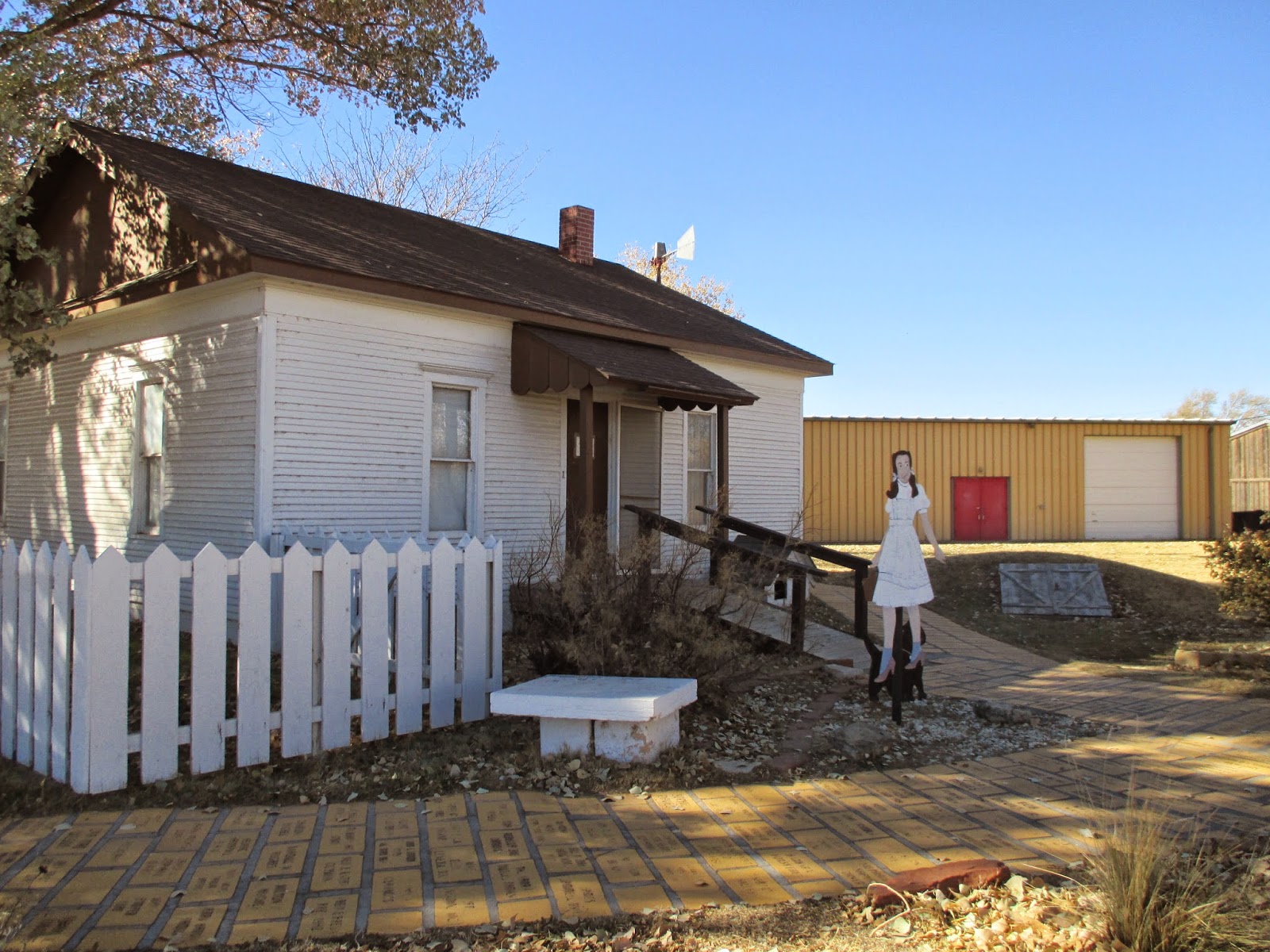 It's been a crazy month since I've blogged last.  The short version is I got a promotion and my work moved me to the Midwest.  Even though we did a lot of driving to get here, that didn't mean we skipped every opportunity to stretch our legs along the way.  We just skipped most of them.  Dorothy's House in Liberal, Kansas was one of the few places that we did stop.  Now you're probably wondering two or three things by now: 1. How did they get that thing back from Oz?  (they didn't- it's fake) 2.  Wouldn't it have suffered major structural damage when the tornado dropped it? (it would have, but it's fake) and 3.  Why Liberal, Kansas and is this some sort of a political statement?  (keep reading, it's not).
The truth of the matter is that ever since MGM released the film in 1939, "Somewhere Over the Rainbow" has become the unofficial state song of Kansas- much like the good citizens of West Virginia adopted John Denver's 1971 hit "Take me Home Country Roads".  Even though Dorothy Gale refers to her beloved Kansas several times in the movie, the most famous being "Toto, I've a feeling we're not in Kansas anymore", she never does come out and say which town in Kansas was home. 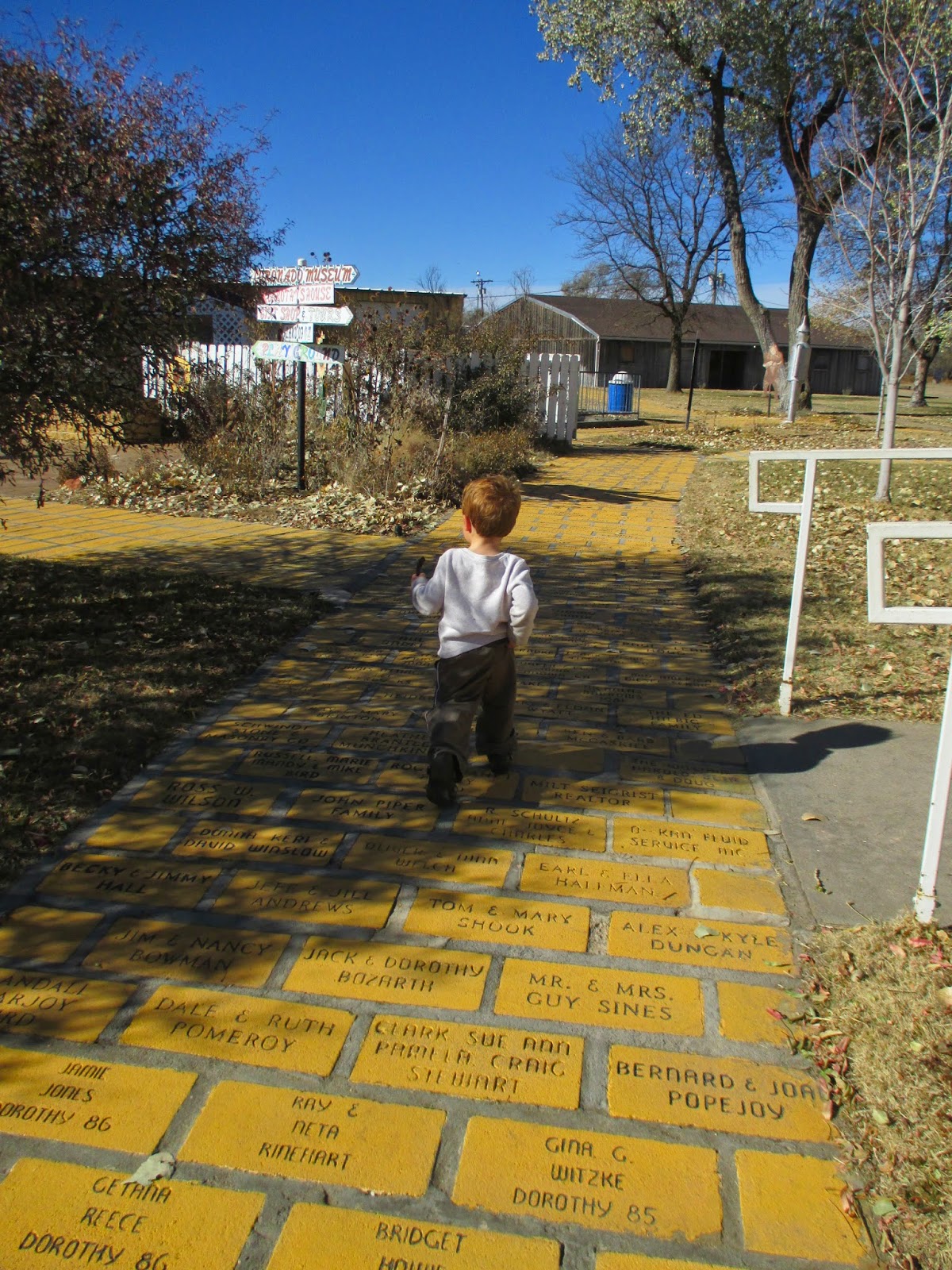 In 1981, the citizens of Liberal decided that Liberal was as good a place for Dorothy to be from as anywhere else in Kansas, so they preemptively claimed her as a citizen.  They even got the governor of Kansas to declare that Dorothy was from Liberal.
An old farm house from a few miles outside of the city limits was located and determined to look close enough to the prop used in the movie, so they hauled it in to town to set up a museum and a place for fans of the movie to stop and spend their money.   The house was built in 1907, and was not actually used in the movie.  The house in the movie was built on a set in Hollywood and nothing remains of it.
There's a museum on site and for a small admission fee, you can follow a blue-checked gingham dress wearing Dorothy look-alike tour guide around, complete with ruby slippers,  and learn more about the movie and the farmhouse.  Our kids had way too much energy to burn, so we opted to just follow the yellow-brick path instead.  They had a great time running around the grounds, playing on the playground, and looking at the replicas of the Lion, Scarecrow, and Tinman.  The Tinman was created by a shop class at the local high school.   My wife enjoyed the lion drinking fountain and the memories it brought back from her youth of the similar one at the Hogle Zoo in Salt Lake City, Utah. 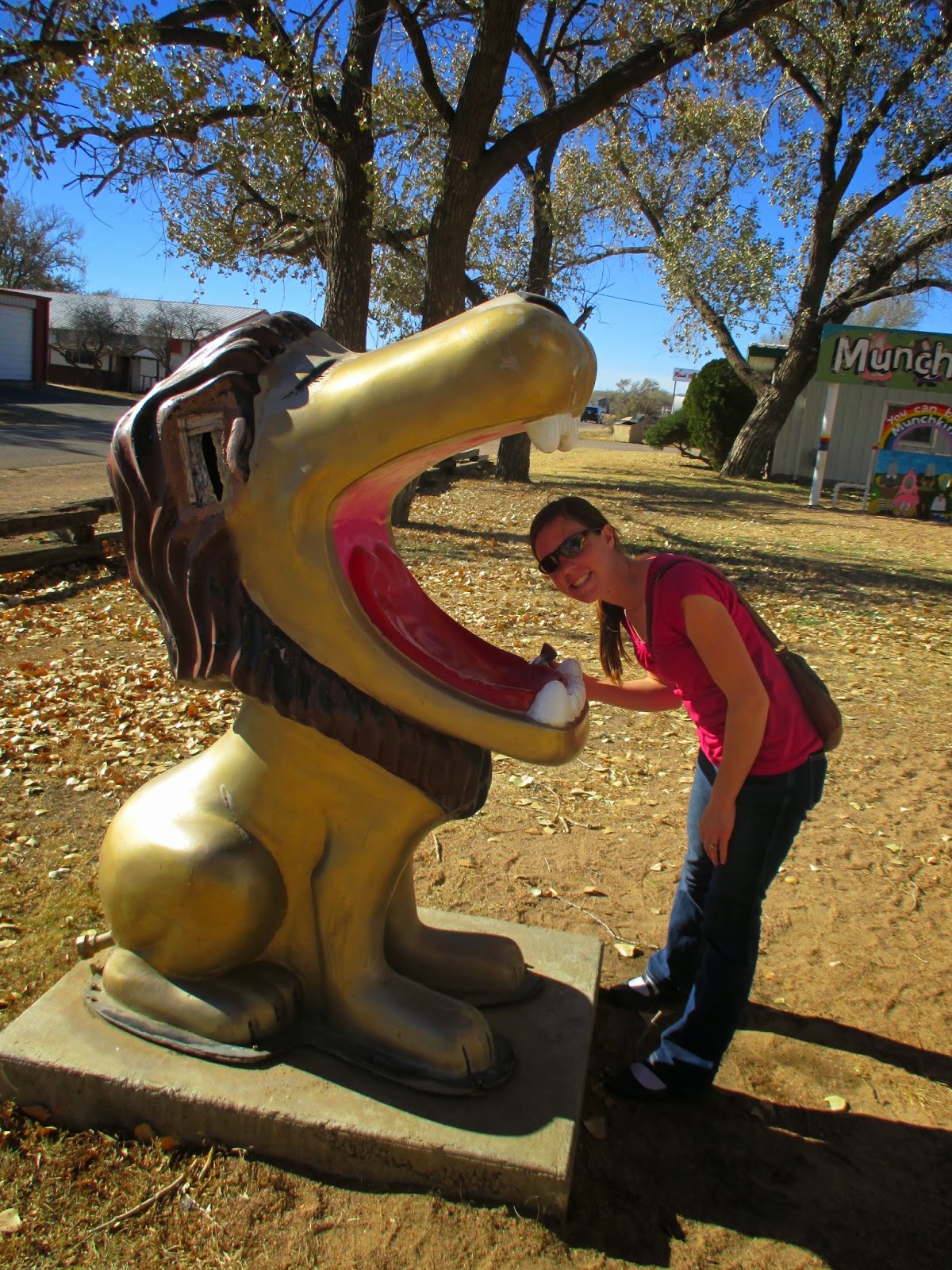 Liberal, Kansas got its name from one of the first citizens of the area and his generosity with his well water.  He allowed travelers to have all they wanted.  Imagine some dusty cowboy, with a the spillage of a long drink of cool water dribbling down his face- "That's mighty liberal of you pardner." You get the idea.  Liberal's main drag is Pancake Boulevard- Dorothy's house is located just a block north of it.  Pancakes you say.  I'm not sure if that first old farmer was liberal with his pancakes or not.  But Liberal does have a Pancake Day celebration.  So whether the street gathered its name from the celebration, or from the fact that it is flat as a pancake in western Kansas, I can't say, but if you find out let me know!