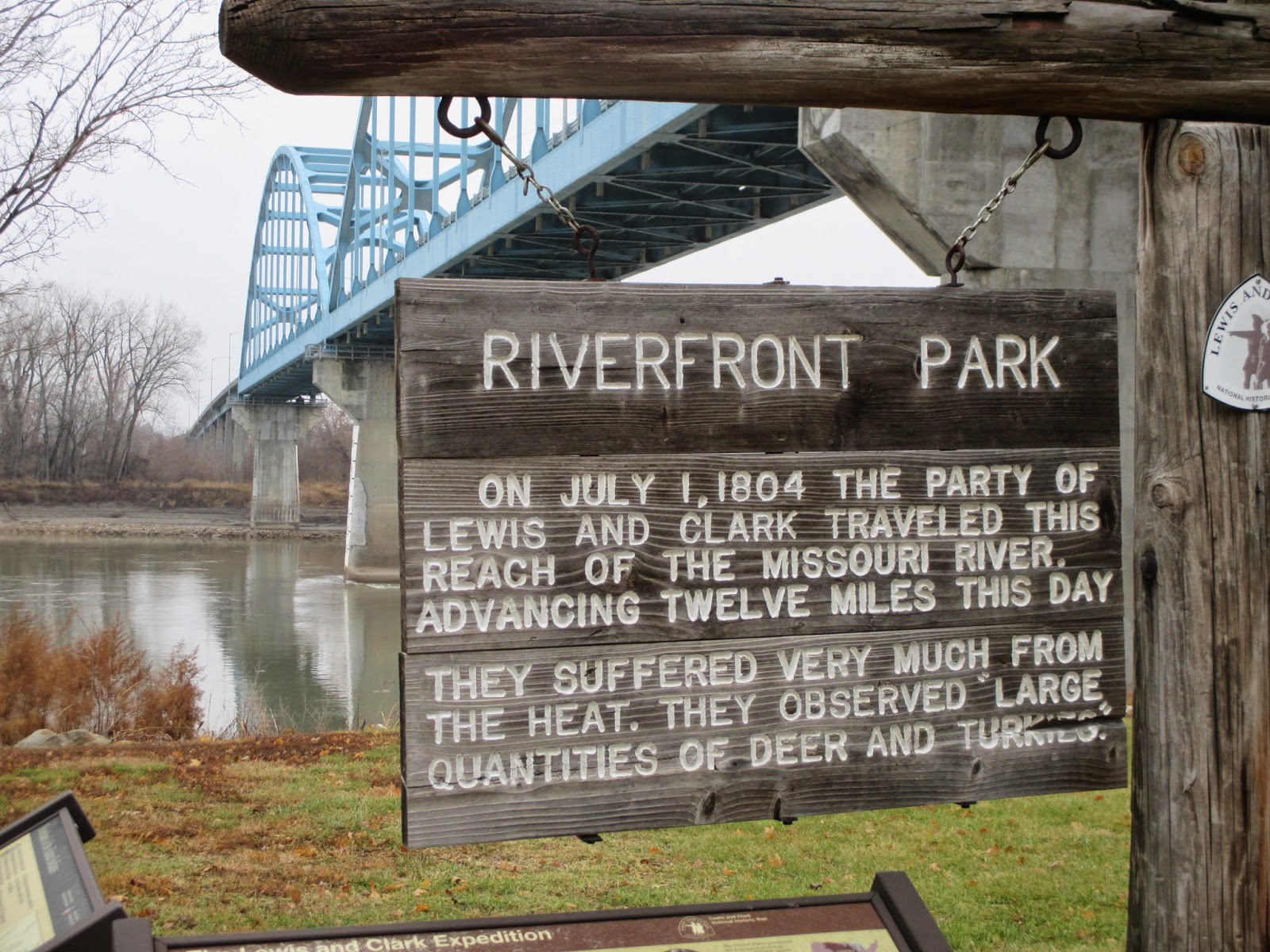 A few days after we made it to Kansas, we were all ready to get out and do some exploring.  All along the Missouri River there are signs directing you to historic sites along the Lewis and Clark Trail.  We saw one of the signs in Leavenworth and followed the directions to Riverfront Park.  We checked both ways, then drove across the train tracks, and shortly found ourselves in a parking lot, where we parked the car and got out to explore a little bit.  We soon found ourselves standing in front of the Lewis and Clark historic marker.  "On July 1, 1804 the party of Lewis and Clark traveled this reach of the Missouri River, advancing twelve miles this day.  They suffered very much from the heat.  They observed large quantities of deer and turkeys."  So even though they didn't actually stop in Leavenworth, they passed through the area.  I'm sure we'll stop at lots more of Lewis and Clark Historic Sites while we're here. 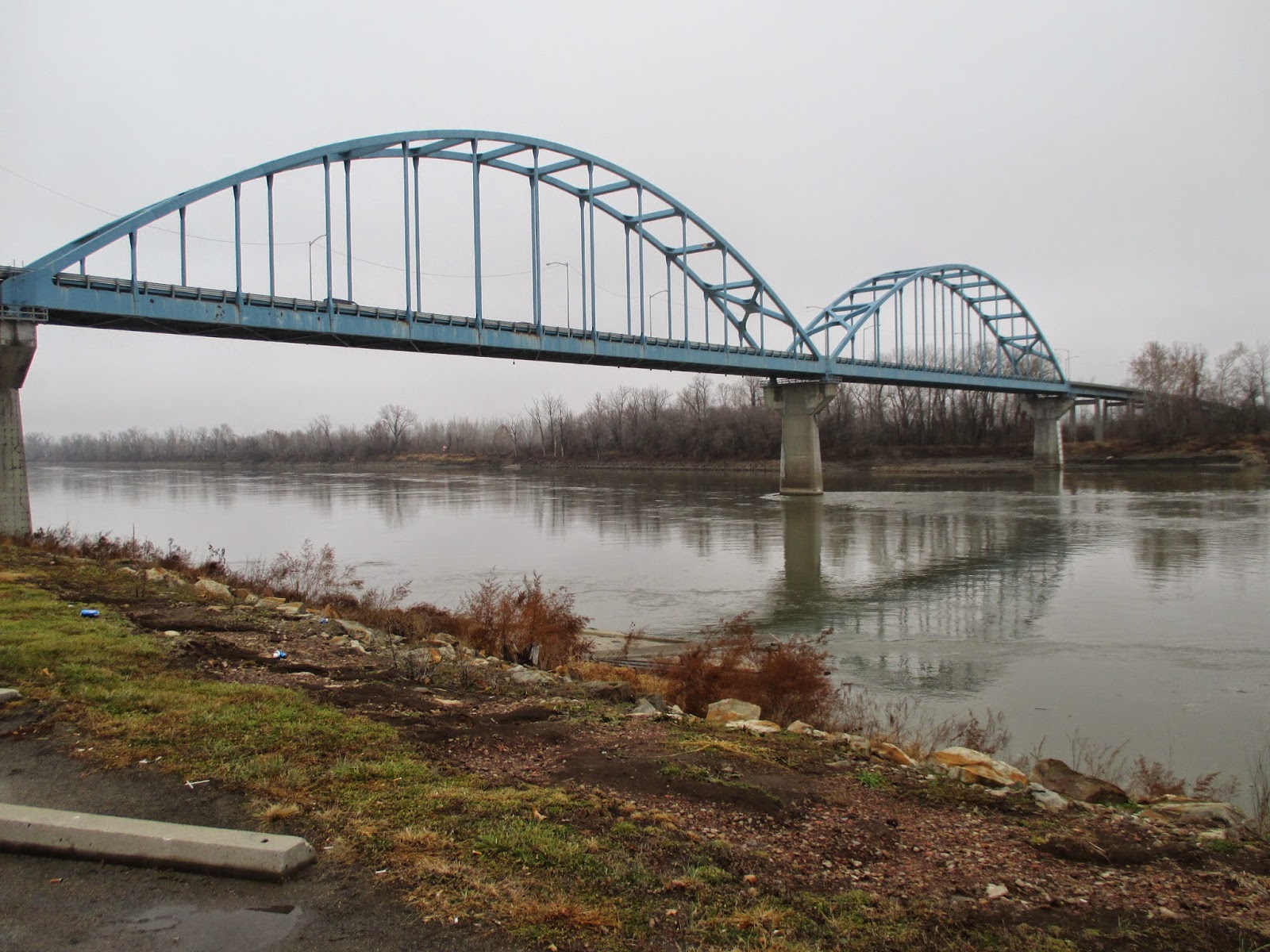 The park is located under the big blue bridge that spans the Missouri River between Kansas and Missouri.   It was a drizzly rainy day, but it was still great to get out.  We also learned a little more about Leavenworth. 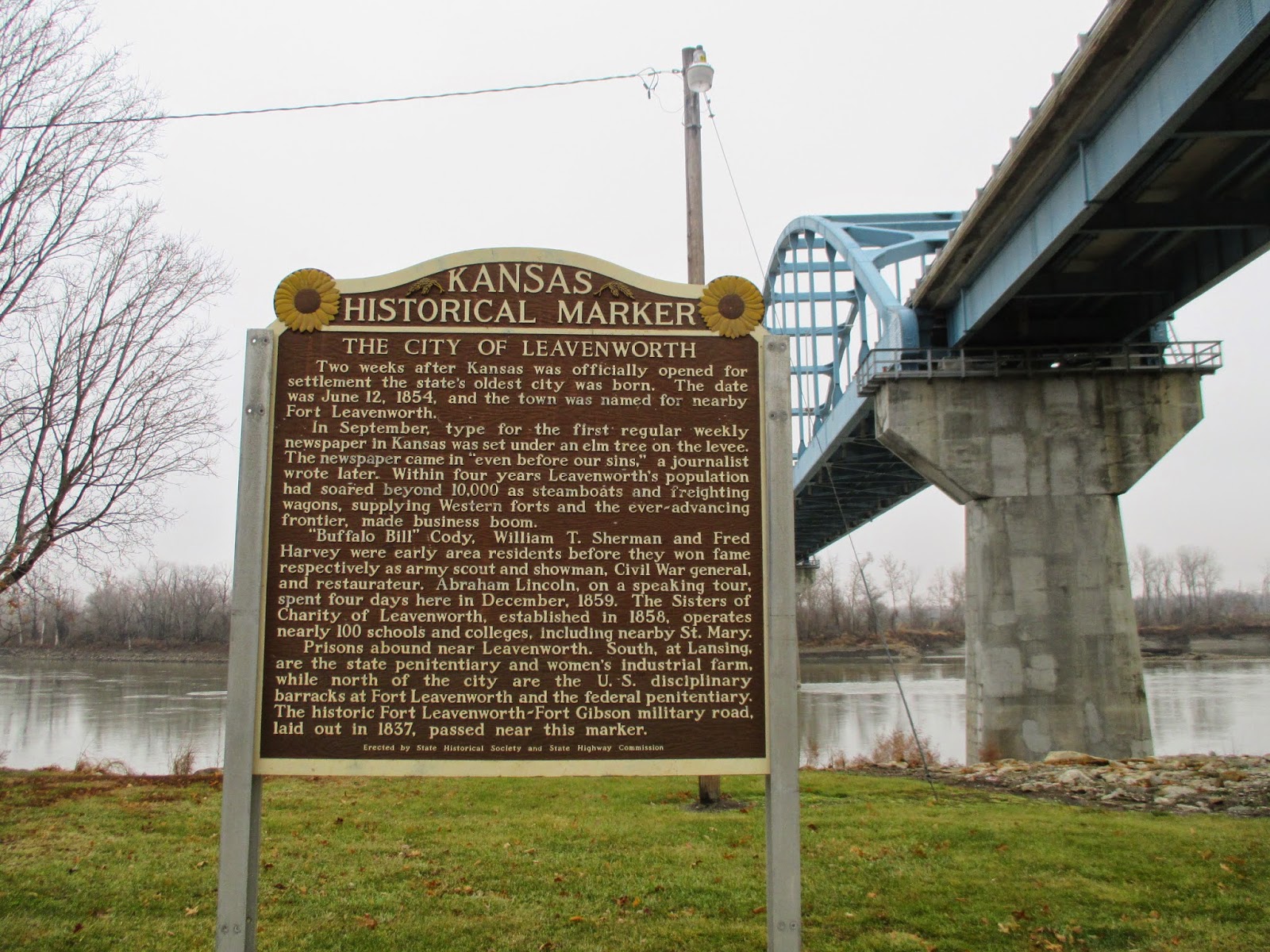 The Kansas Historical Marker says:
"The City of Leavenworth
Two weeks after Kansas was officially opened for settlement the state's oldest city was born.
The date was June 12, 1854, and the town was named for nearby Fort Leavenworth.  In September, type for the first regular weekly newspaper in Kansas was set under and elm tree on the levee.  The newspaper came "even before our sins," a journalist wrote later.  Within four years Leavenworth's population had soared beyond 10,000 as steamboats and freighting wagons, supplying western forts and the ever advancing frontier, made business boom.
"Buffalo Bill" Cody, William T. Sherman, and Fred Harvey were early area residents before they won fame respectively as an army scout and showman, Civil War general, and restauranteur. Abraham Lincoln, on a speaking tour, spent four days here in December 1859.  The Sisters of Charity of Leavenworth, established in 1858, operates nearly 100 schools and colleges, including nearby St. Mary.
Prisons abound near Leavenworth.  South, at Lansing, are the state penitentiary and women's industrial farm, while north of the city are the U.S. Disciplinary Barracks at Fort Leavenworth and the federal penitentiary.  The historic Fort Leavenworth - Fort Gibson military road, laid out in 1837, passed near this marker."
WOW- There's TONS of history here.  I've definitely got to get out and explore and explain more.  One thing I love about travel is the way separate places link together to form a web of relations.  I'll try to call them out as I find them- for example we visited Buffalo Bill's grave when we were in Colorado.  And the Mormon Battalion, which journeyed through Southern Arizona, began their trek here at Ft Leavenworth.  So, if anyone ever asks you what Buffalo Bill, Lewis and Clark, and the Mormon Battalion have in common, now you know- they've all been through Leavenworth Kansas!
﻿ 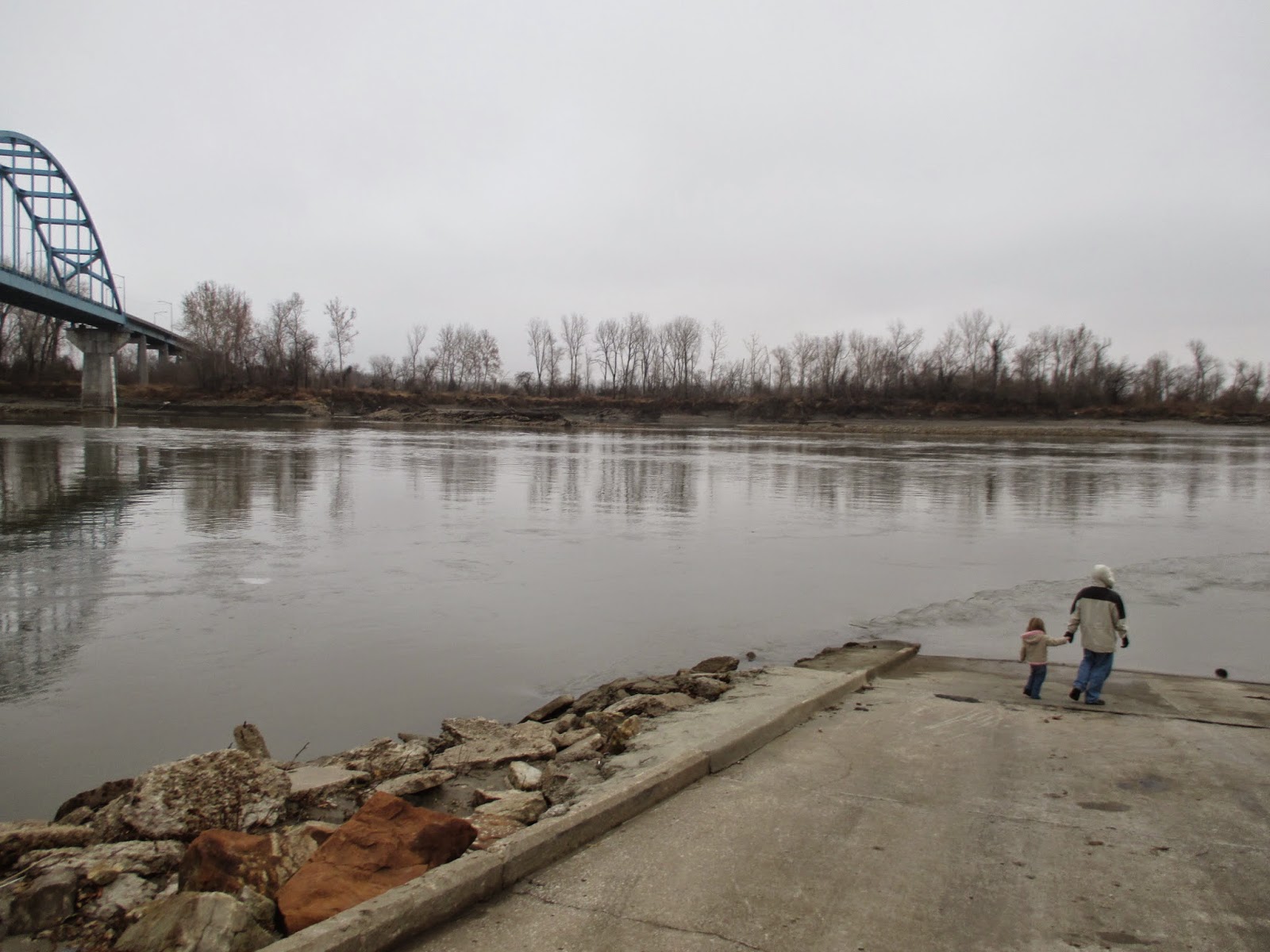 There's also a boat launch on the Missouri River here.  The Missouri River flows amazingly fast, so be cautious along the river.  I'll have to make it back here to try out some fishing.  There's a campground on the north end of the park for $10-12 a night, but I don't think I'll ever camp here.  Why?  Because of the train tracks.  While we were wandering, a train drove by and it was really loud.  I don't think I'd sleep very good with the occasional train driving through in the middle of the night.  It's a pretty campground though if you don't mind trains!  There's a trail on the north end of the campground that we started to follow along the river, but by then the kids were cold, so we packed them up and called it a successful day.