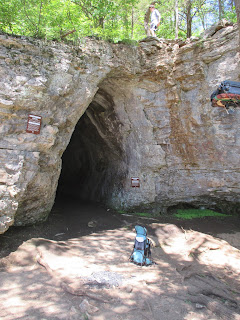 We visited Sequoita Park in Springfield in hopes that we could go underground and explore the caves.  Sequoita means "many springs", and at one point the lake in the park was used as a fish hatchery.  There are three entrances at Sequoita Park, and all were closed when we visited in late April due to bats migrating back from down south.  The city of Springfield does a pretty good job of monitoring the caves and closing them when the bats are back.  So although we didn't get to enjoy the caves, the kids had fun playing at the park for a while. 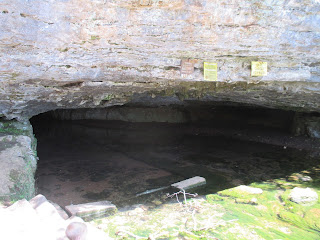 The three caves at Sequoita Park are called Crawlway-all-the-way Cave, Walkway-all-the-way cave, and Fishers Cave.  Crawlway cave is small, and you need to crawl.  Walkway is more open.  Fishers Cave has a pretty good flow of water from it.  In March every year, the city of Springfield opens it up to boat tours.  Those who are interested can call the Springfield Outdoor Recreation Initiatives phone number at 417-833-8647.  I'd like to visit again when the caves are open.