Saturday was another adventure day. Shortly after we moved to Fort Collins, we went to the Fort Collins Museum. One of the exhibits there was on the Lindenmeier Fossil Site. Back in the 1920's there was an archeological dig near the Colorado/Wyoming border that excavated the site of a prehistoric village. In addition to several Folsom points (a kind of stone arrowhead), beads, etc, the most astonishing find from the site was a prehistoric bison bone with one of the points imbedded in it. The site was excavated by the Smithsonian Institution, as well as the Denver Museum of Nature and Science. Most of the artifacts are owned by the two museums, but I'm unsure whether they are on display or not. Some of the artifacts though are at the Fort Collins Museum.

After hearing about it, I thought it would be pretty cool to go check it out. The site is currently owned by the City of Fort Collins Natural Areas program. It is closed December through February, so with it opening again in March, we took the drive up there.

It's about a 30 mile drive due north of Fort Collins. There is a pavilion with signs telling about the site, but unfortunately you can't get close enough to see any of the excavations or anything. The picture below is from the pavilion, out toward the wash where the excavations were. I was pretty disappointed that we couldn't go walk around down there. 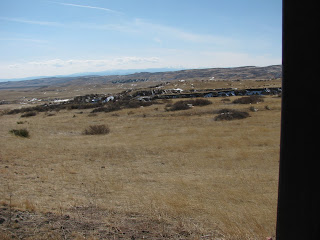 The drive up did have a few cool moments though. There were several flocks of blue birds. We didn't have enough camera zoom to get a great picture, but this one works. After talking with one of our ecologist friends, we're pretty sure they are mountain bluebirds. 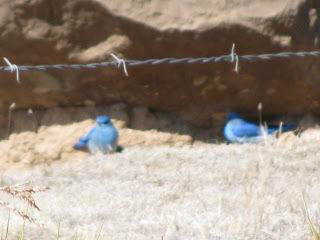 Once we made it to the natural area, we drove over a hill and a herd of pronghorn antelope were laying in the grass and pretty close for pronghorn. We stopped the car and took a few pictures. They were uneasy with us, so they all stood up and ran away. 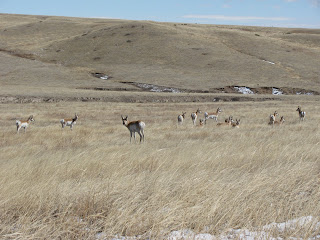 There are several hiking trails in the natural area, so we went for a hike on one of them. The Towhee Loop is about 3 miles. It goes up a small canyon, along a ridge, then down another canyon. 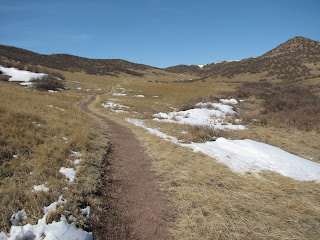 The views were pretty cool, but it was rather windy. 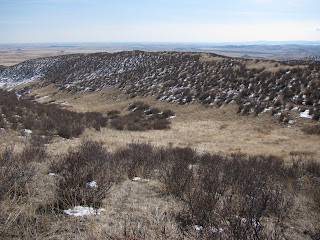 Near the bottom, there is an old windmill, along with some remnants from the farm that used to be here. 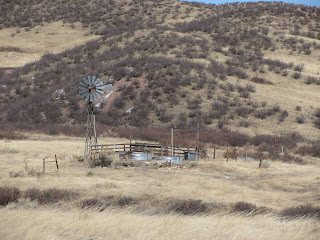 There are several longer trails for mountain biking that looked pretty cool, but that's for another day.