The week before Memorial Day we took a trip to Northern Arizona.  The last time I'd taken a whole week off of work was back in 2012 when we took a long trip to Oregon to visit friends.  Our plan was to visit the Petrified Forest, Grand Canyon, and numerous other points along the way.  We prepared most of what we needed over the course of the week leading up to the trip, did some final packing and loading on Friday after work, and were off!  The plan was to drive for several hours, then find a place to camp somewhere between Globe and Show Low.  A few miles past Globe, we saw the sign for the Jones Water Campground, so we pulled in and found a nice primitive sight, and crashed for the night.  ﻿ 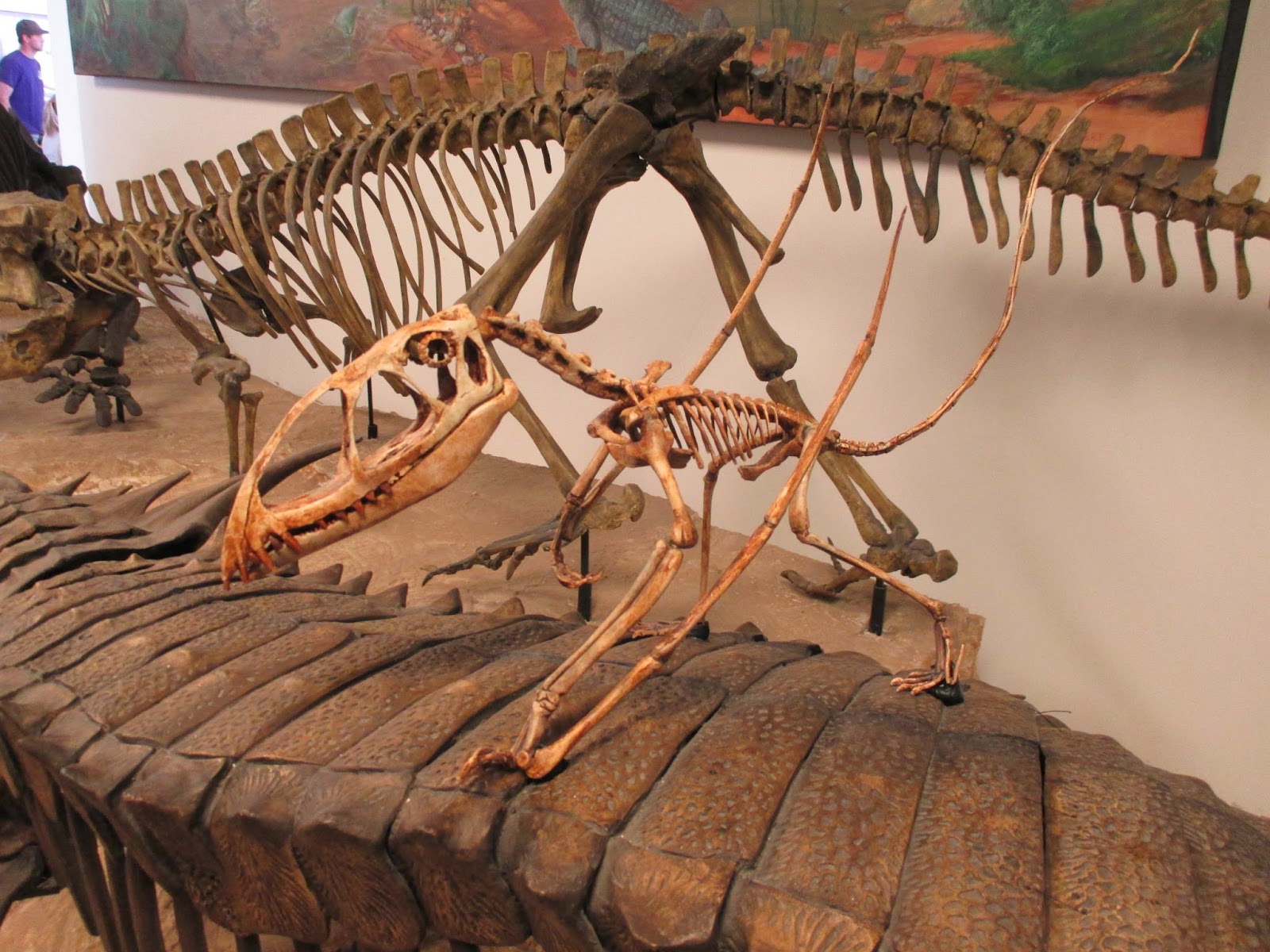 After breakfast in the morning, we loaded up, drove through Show Low, then on to Petrified Forest National Park!   My wife had been wanting to visit the Petrified Forest for a long time- at least since we lived in Fort Collins, Colorado.  We went in the South Entrance, then stopped at the visitor center to look at the museum and to take a short hike there out among the agatized wood chunks that litter the ground.   The small museum had several exhibits, the best being one of showing the example of several fossils that have been found at Petrified Forest National Park.  My favorite was this flying dinosaur. 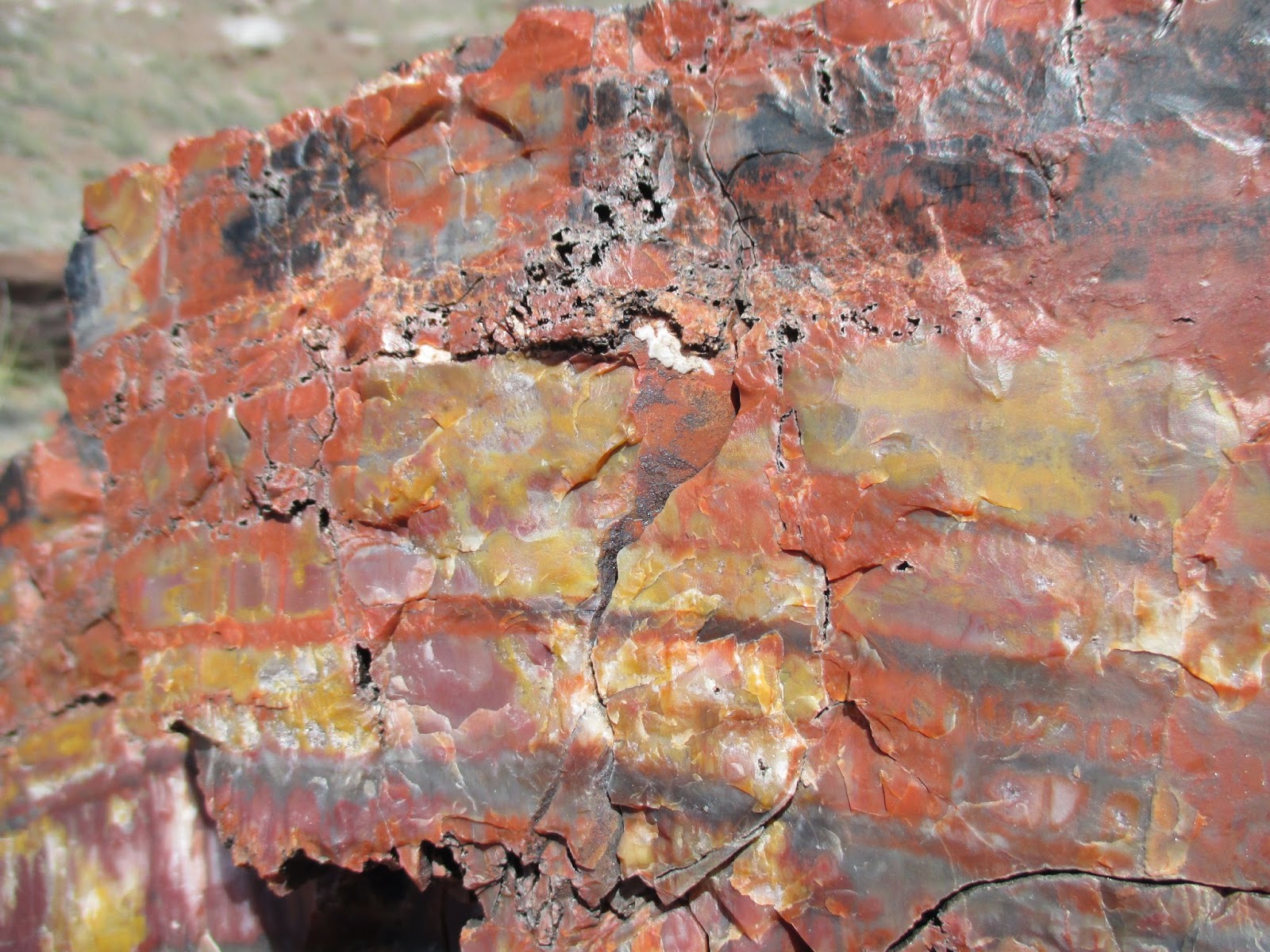 The colors in the petrified wood are beautiful.  I've found petrified wood before, but it's mostly been browns and blacks.  The wood here is all sorts of reds, yellows, browns, and other colors. 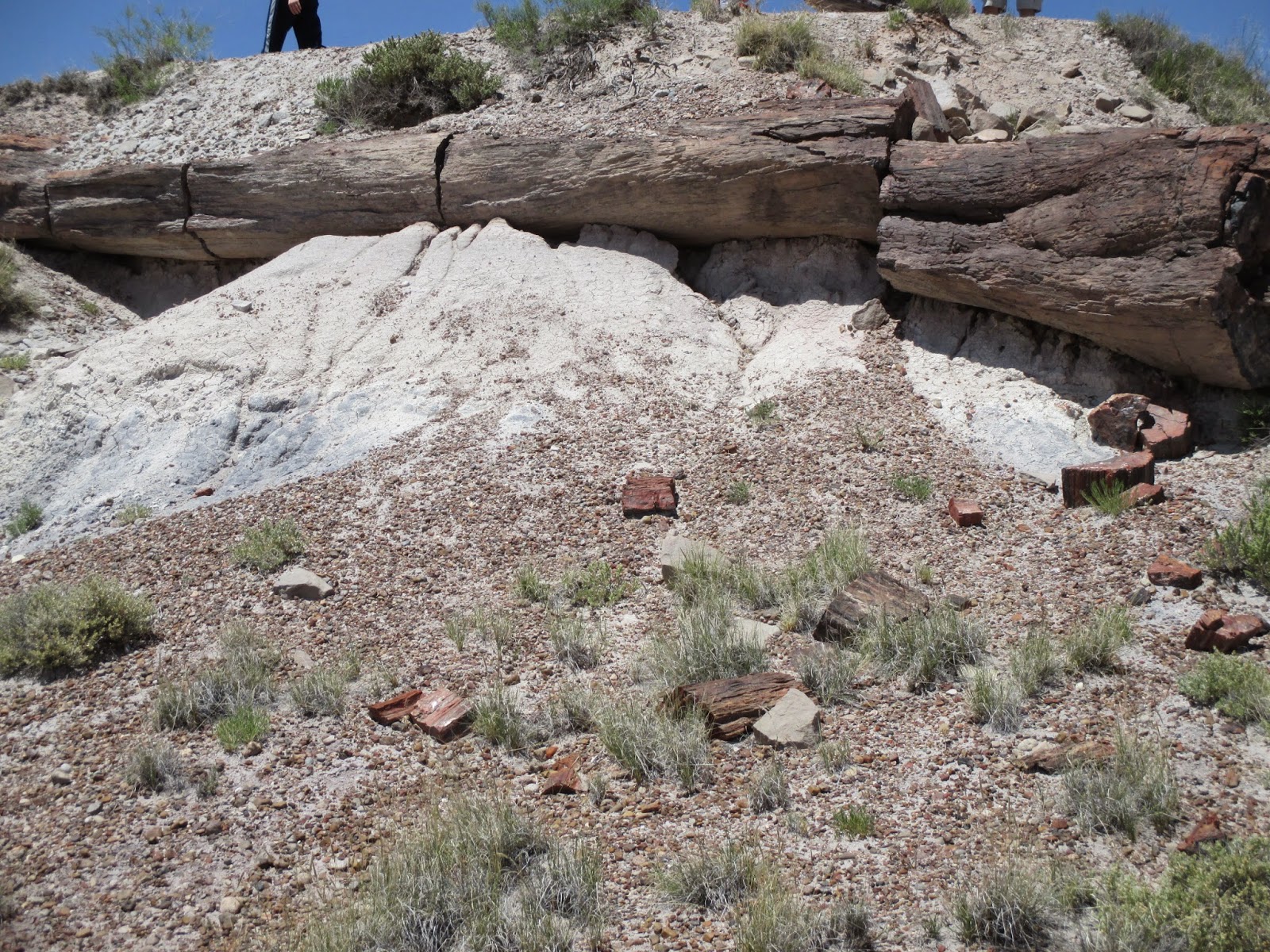 The area the park is now used to be slow winding streams and rivers.  As the trees died, they'd fall into the river, then get buried in the silt and sand.  Over the course of 200 million years or so, the cells in the tree would be replaced with stone, leaving the petrified logs.  Initially, the logs mostly start out whole, but as they erode out of the hillside and lose the support beneath them, they fracture into smaller pieces. 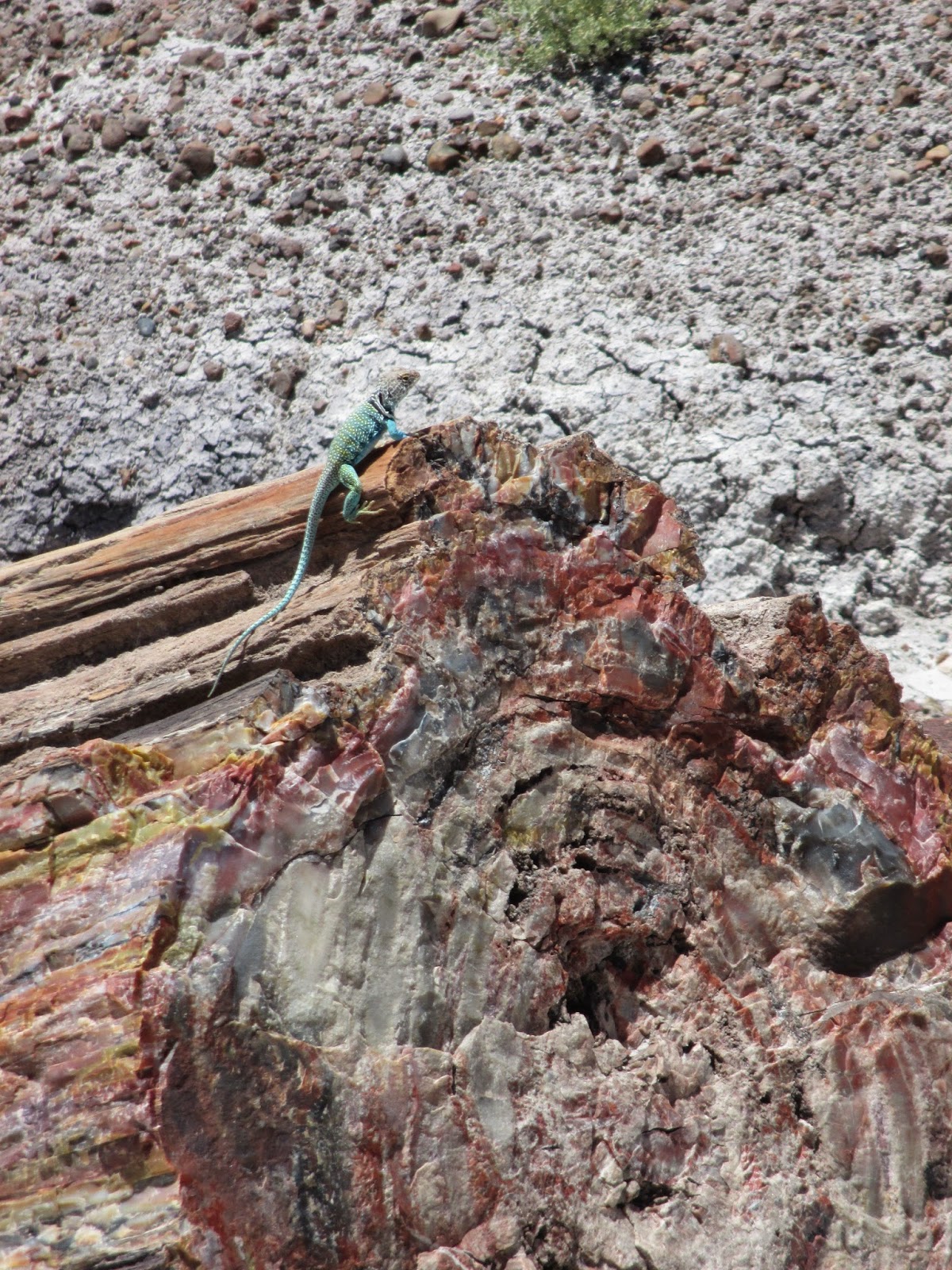 Behind the visitor center as we were hiking around one of the kids noticed this collared lizard on one of the logs.  It made a great picture, so of course we had to try and capture it "on film".  The lizard posed quite nicely, but I'm sure a nicer camera would have captured it a little better than I did. 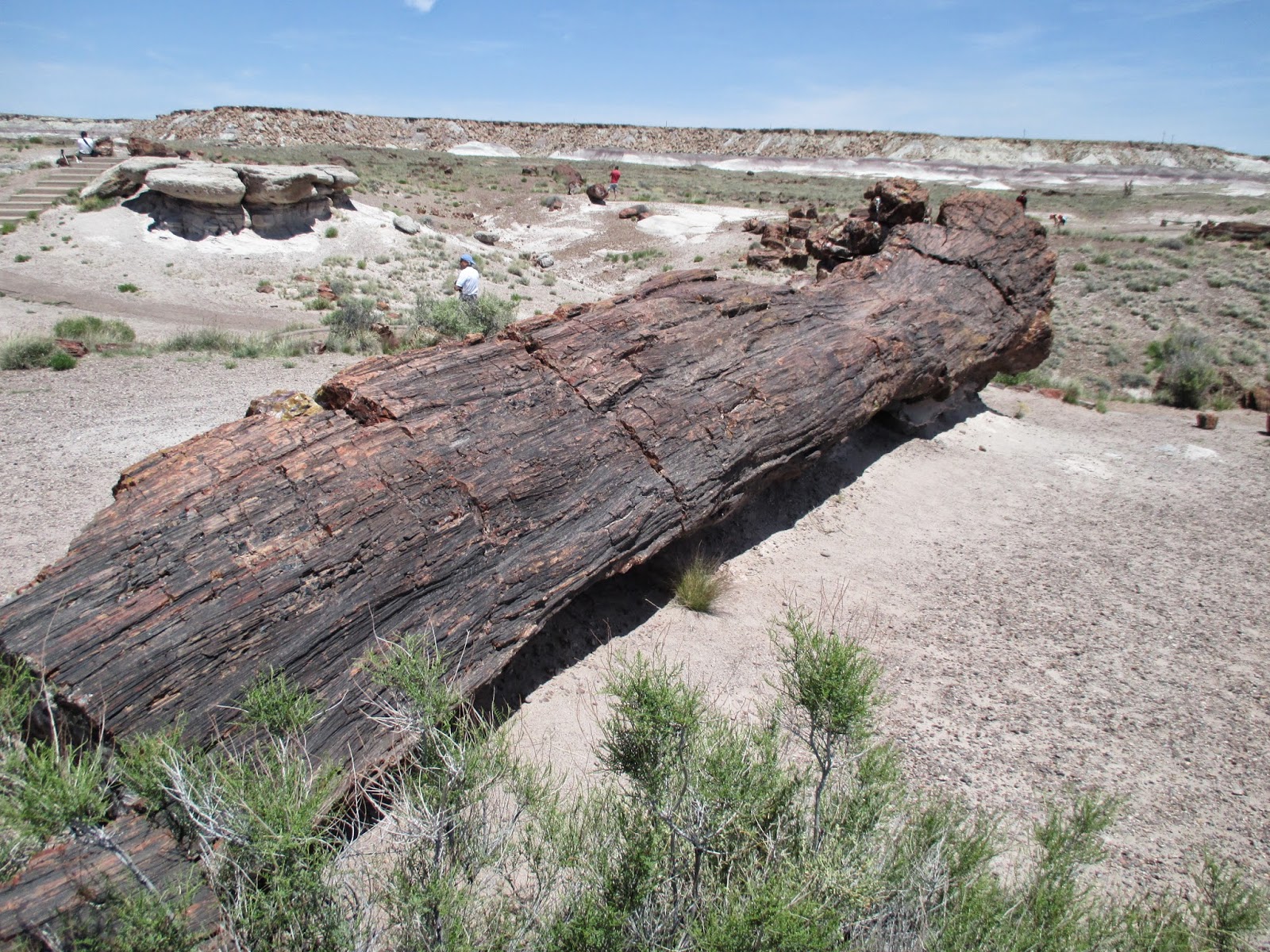 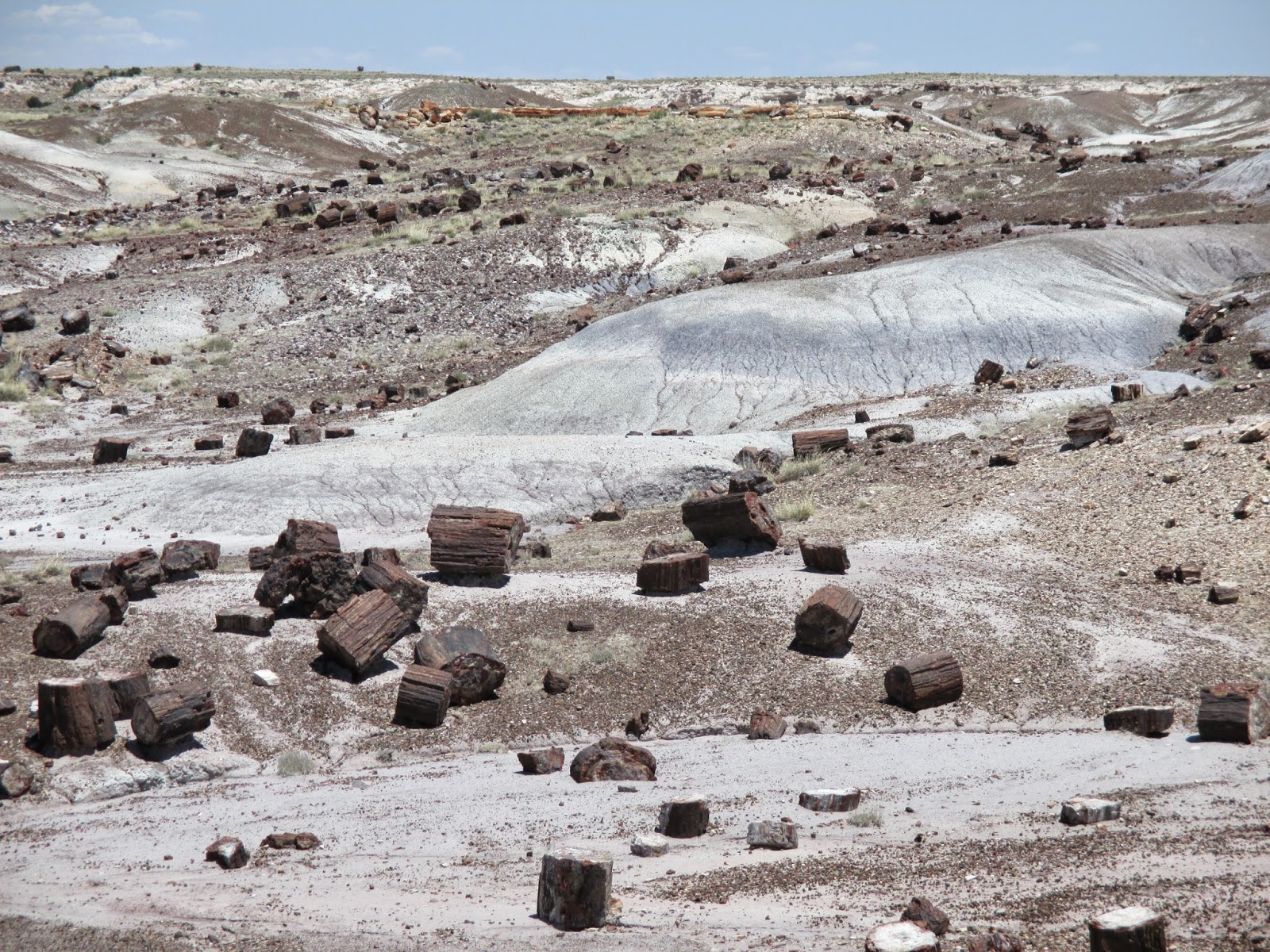 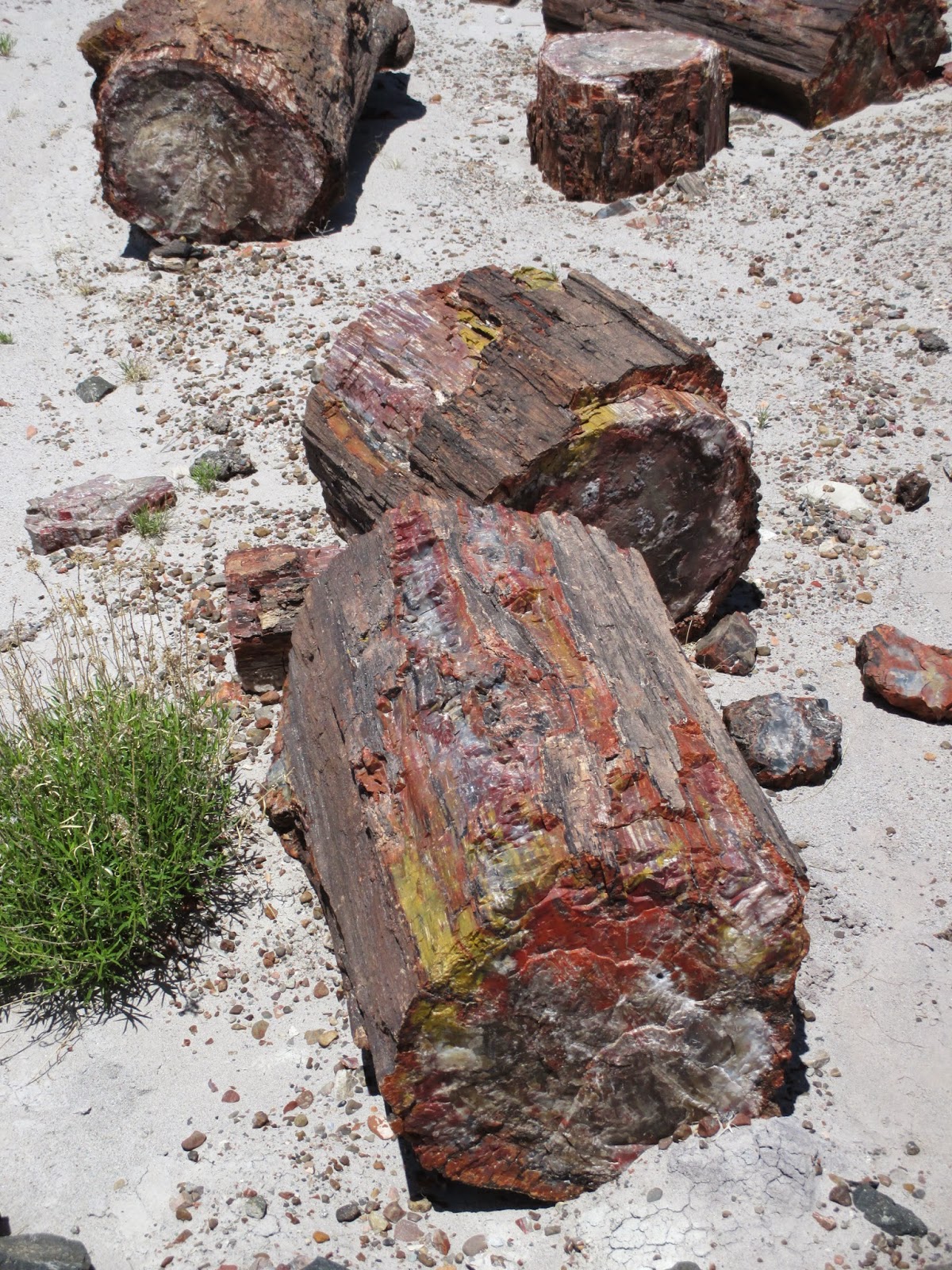 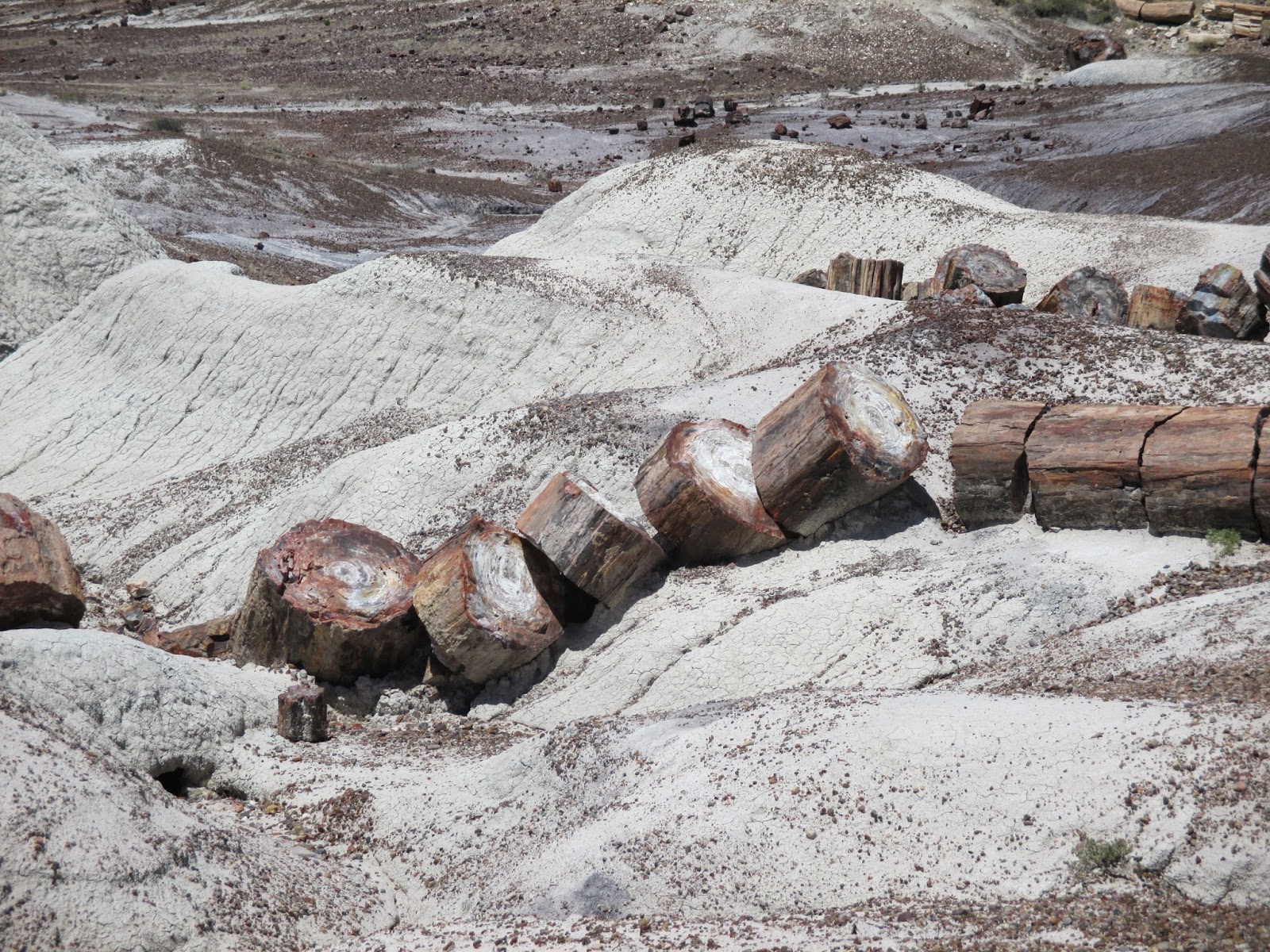 We thought this log was pretty cool how it has broken into several similar sized pieces.  After the hike at the Crystal Forest, the youngest needed a nap. 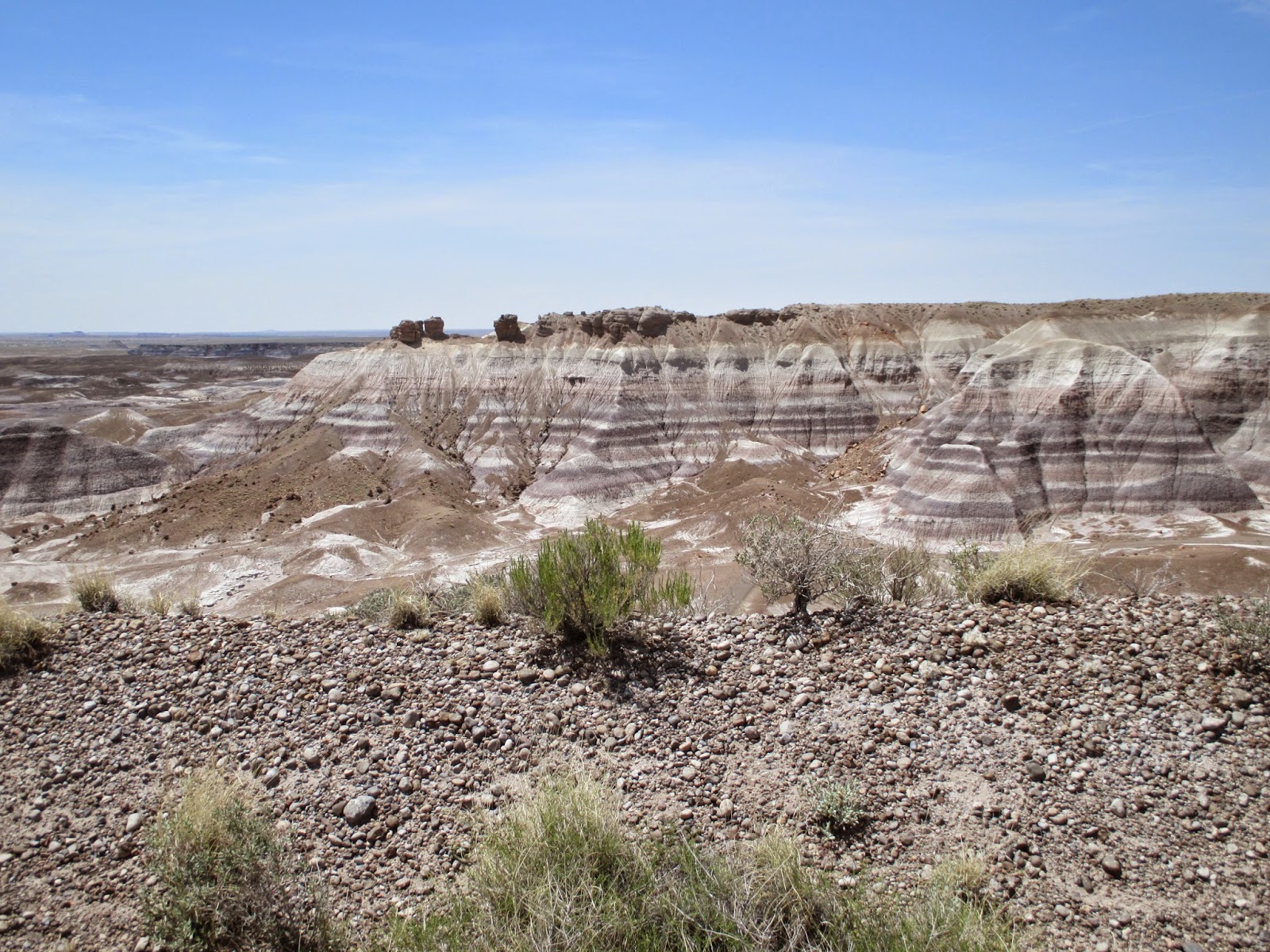 We drove around the Blue Mesa, where the banding in the badlands is really pretty.  The color differences are attributed to differing oxygen levels when the sediment in the different layers settled. 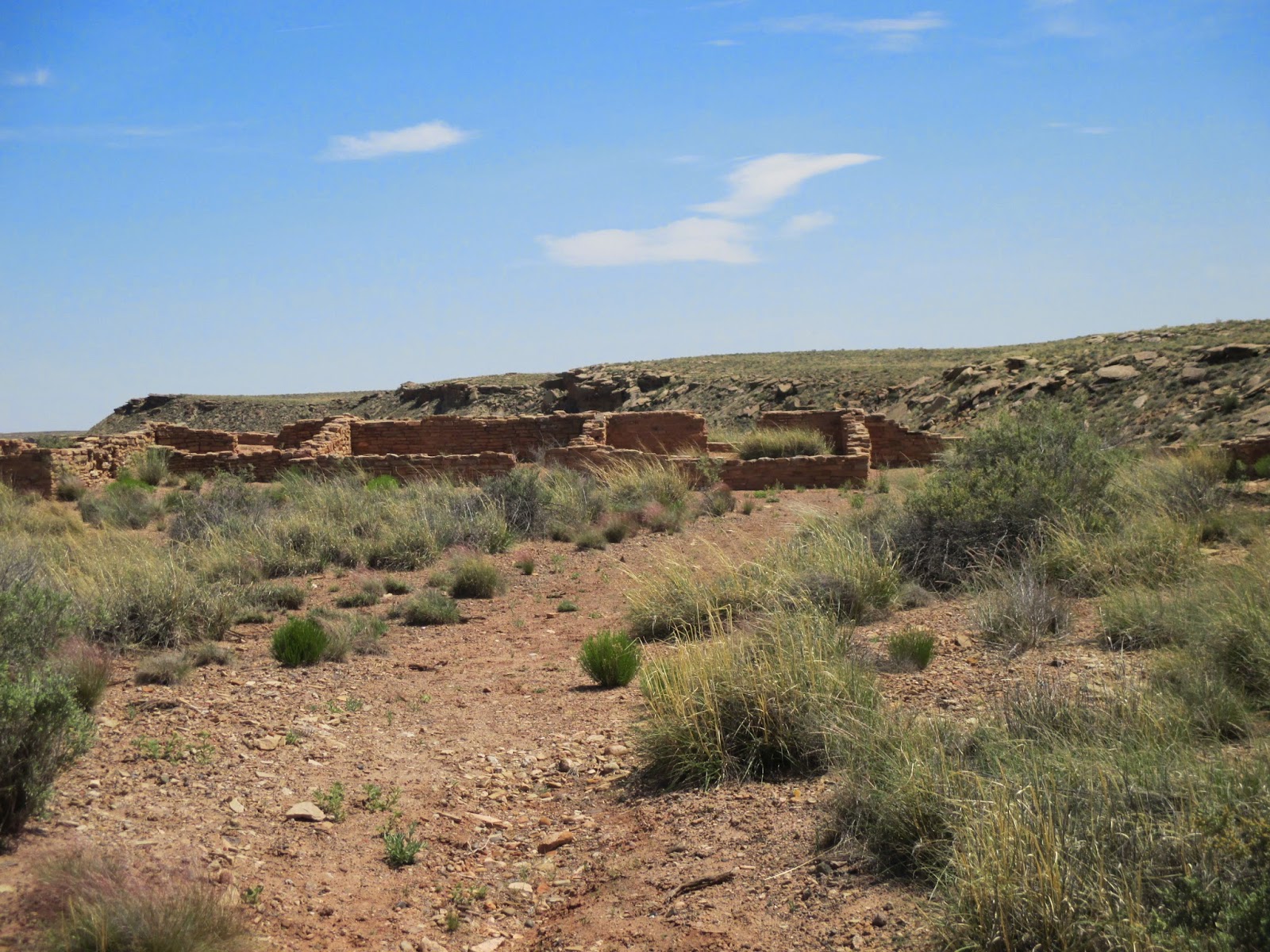 We stopped by Newspaper Rock for a complete disappointment.  The area where the petroglyphs are is fenced off and you can only view them from a long ways away.  If you're planning on visiting Petrified Forest, don't waste your time at Newspaper Rock.  You can't see anything really that good, and the petroglyph of the crane eating the frog is located at the Puerco Pueblo ruins anyway.  I really liked the Puerco Pueblo ruins.  You can see several of the rooms of the pueblo, as well as numerous petroglyphs. 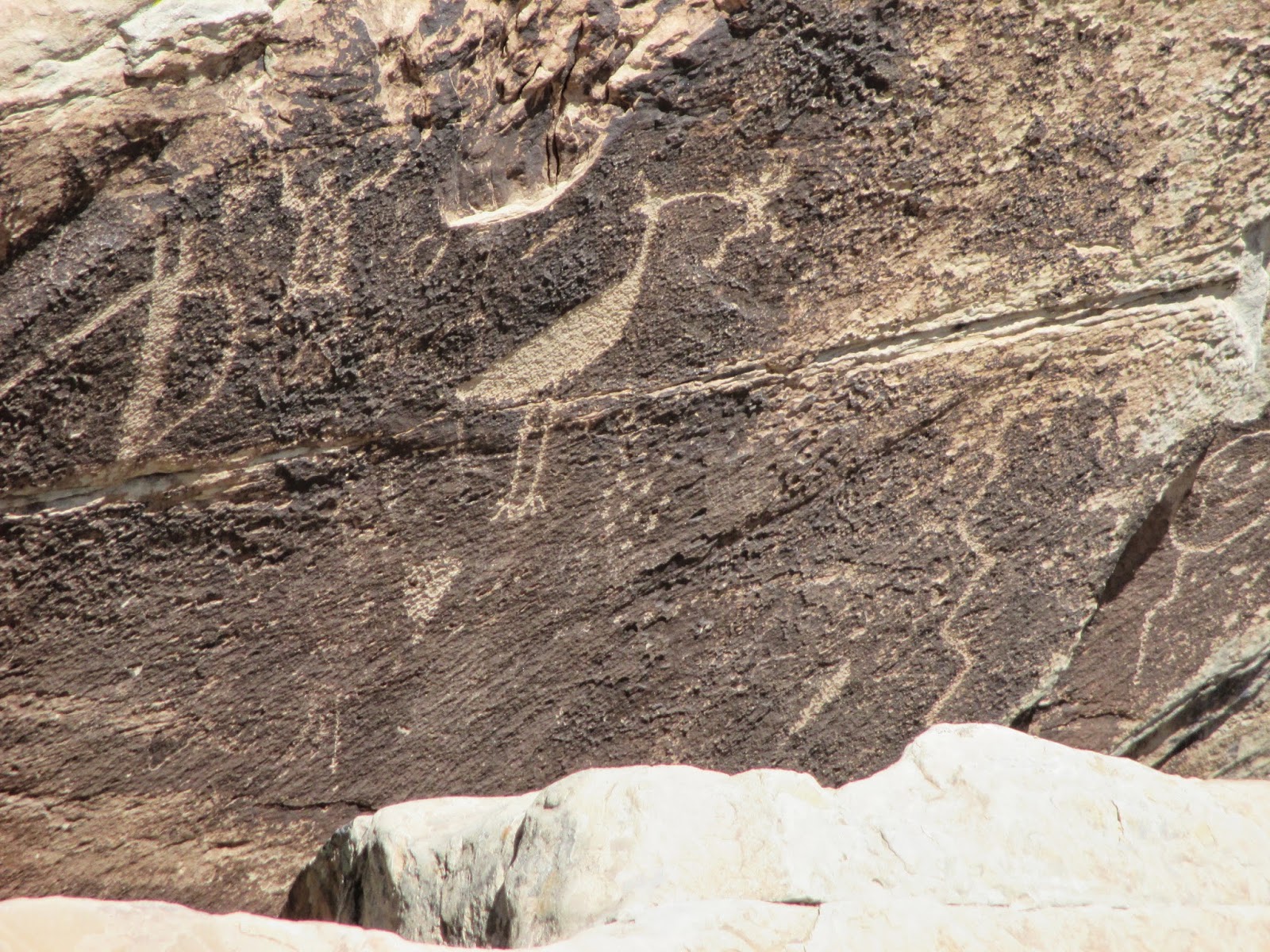 The heron or crane eating the frog is probably the most famous petroglyph in Petrified Forest National Park.  I thought it was really unique.  Puerco Pueblo is definitely one of the best things to see at the Petrified Forest. 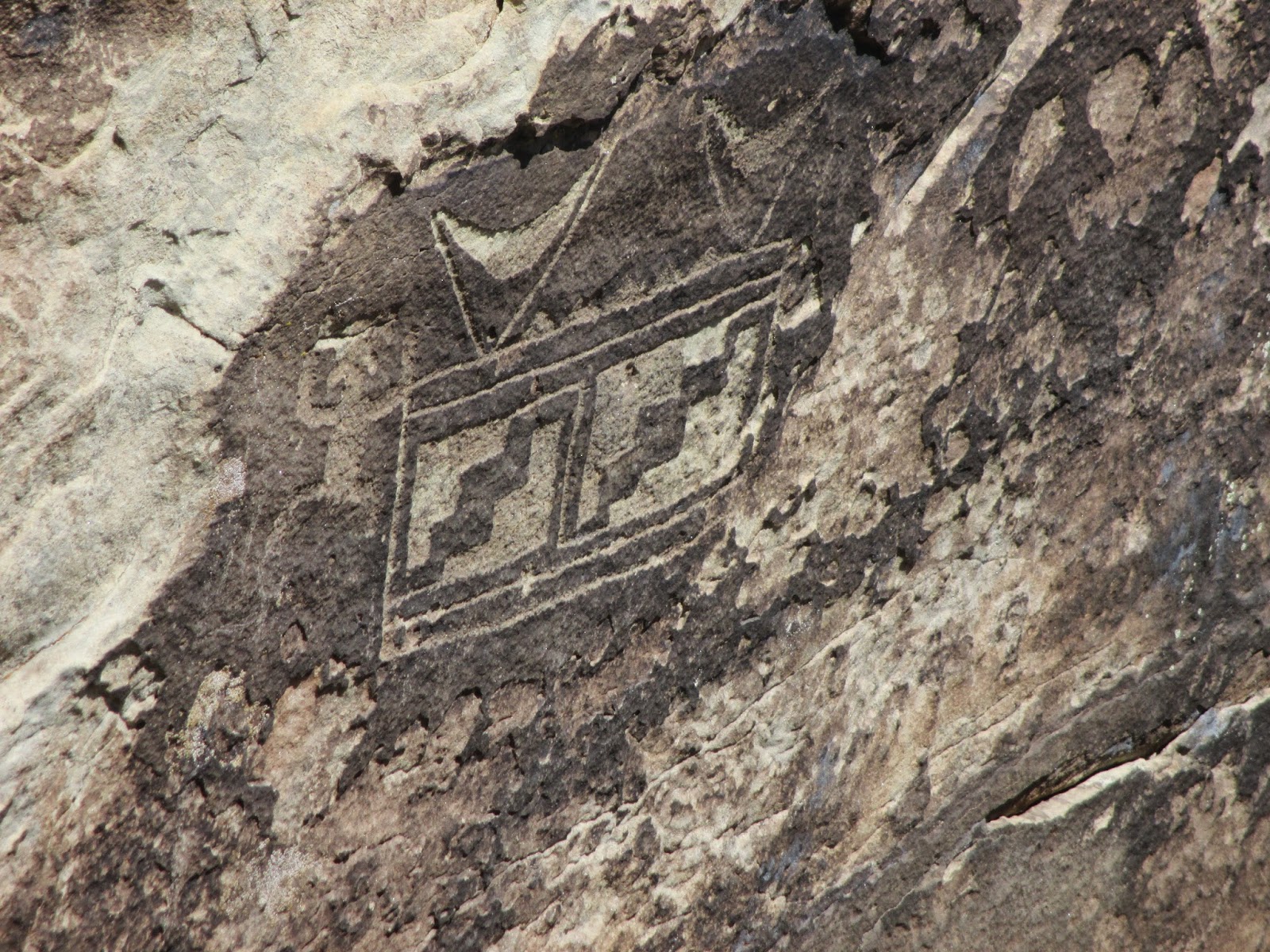 Another nearby petroglyph reminded me of the tlalocs we saw at Hueco Tanks.  I really liked a solar calendar petroglyph that was there at Puerco Pueblo too, but didn't get a good picture of it. 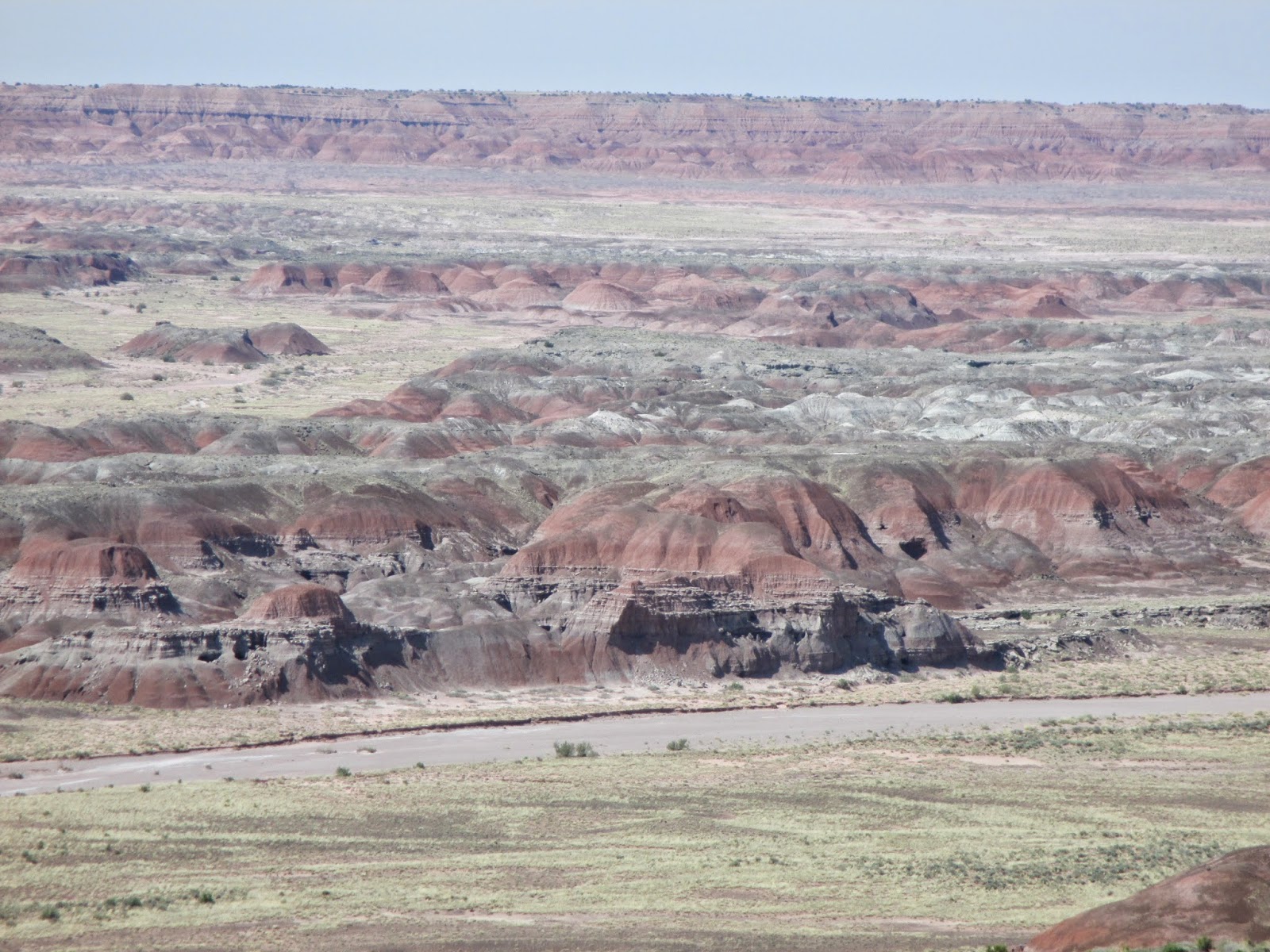 We finished our visit with stop at Route 66,  a view of the Painted Desert, then a stop at the visitor center on the North end of the park. 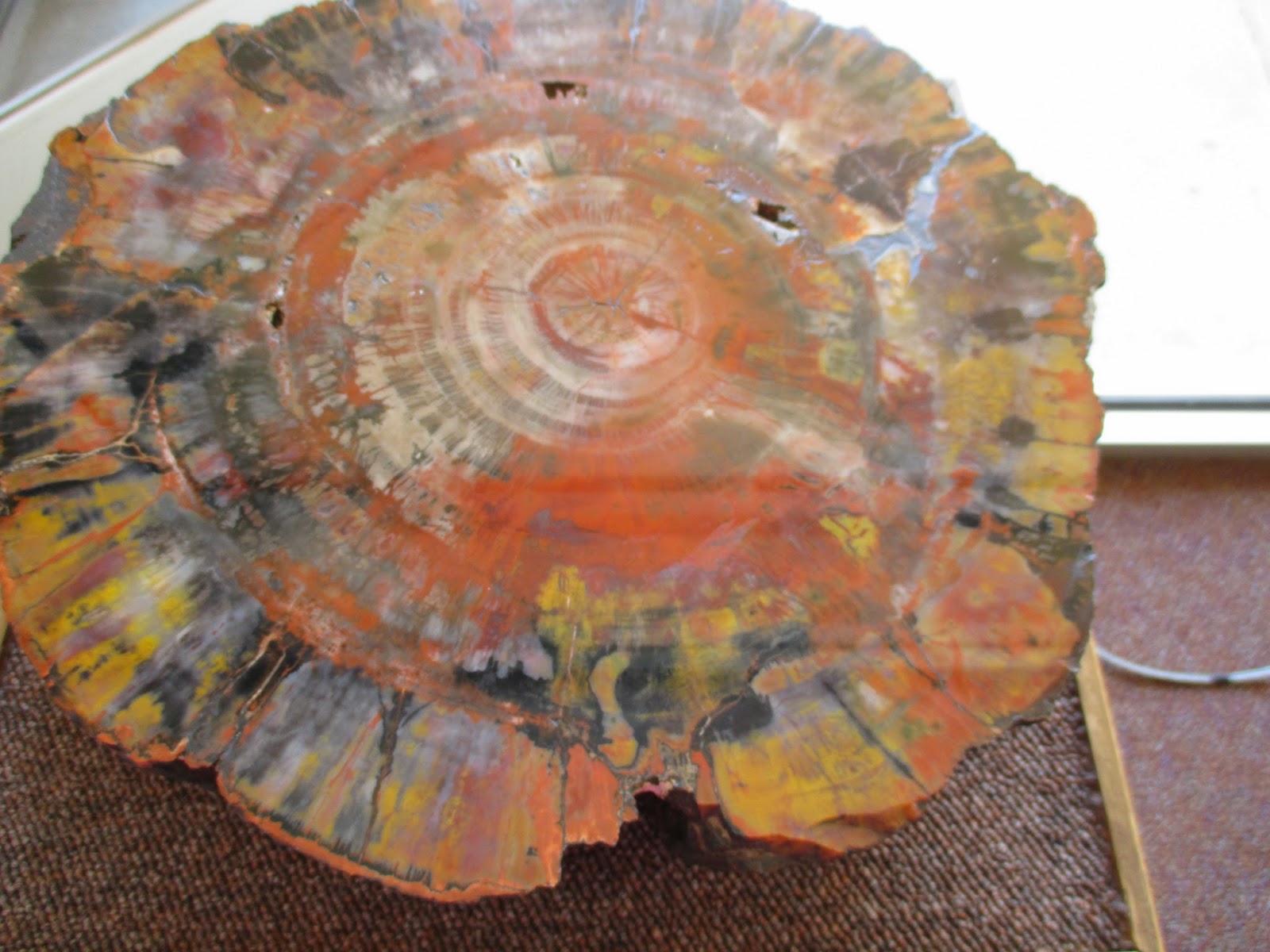 As it would happen, the Petrified Forest was one of the many highlights of our Northern Arizona trip.  We spent about a day wandering the park and found it about enough time to see what we wanted to see, but not enough to make us feel rushed.