Tours and relics at Hueco Tanks 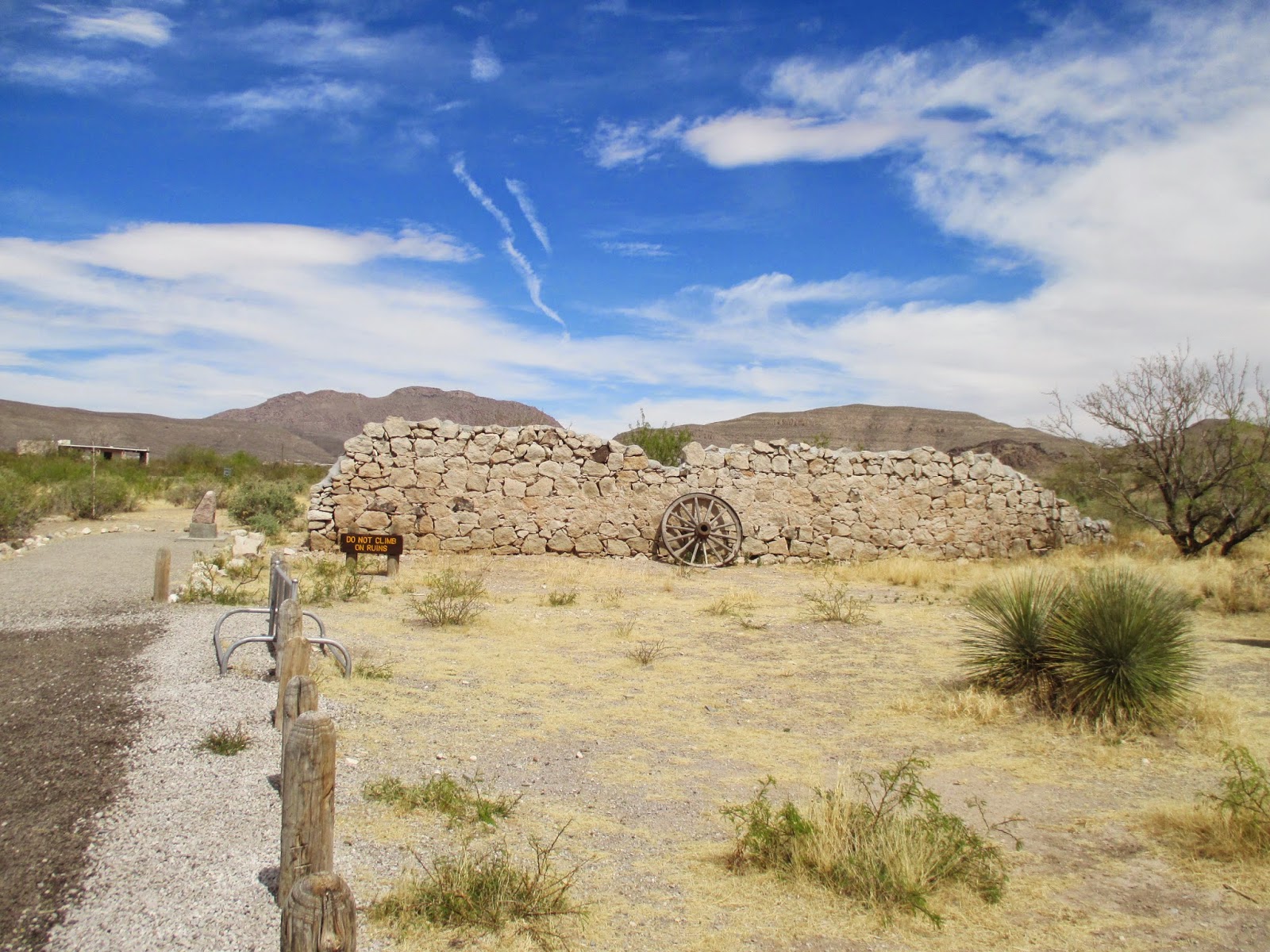 Ah, Spring Break, the much anticipated delight of school children everywhere!  We planned a Spring Break trip for ourselves on April 9-13, purposefully avoiding everyone else's spring break.  We wanted to visit Carlsbad Caverns, climb Guadalupe Peak (the highest point in Texas), and visit Hueco Tanks.  Eric at The Continuing Adventures of Eric and Noelle used to be a ranger at Carlsbad and said to avoid Spring Break if we could, so we took him up on his advice and had a near-perfect trip.  We took off after work on Wednesday, drove to Las Cruces for the night, then continued on to Hueco Tanks.   We had called ahead to reserve spots on a guided tour of the pictographs, and arrived about 10:15 for a 10:30 tour.  The tour we went on was I believe Tour #2 around the West section of the park.  We met at the small interpretive center / museum just after the guard station.  There are a few ruins nearby of an old Butterfield Stage Station.  After everyone was ready to go, we drove over to a parking area near a dam on the west side and began our hike. 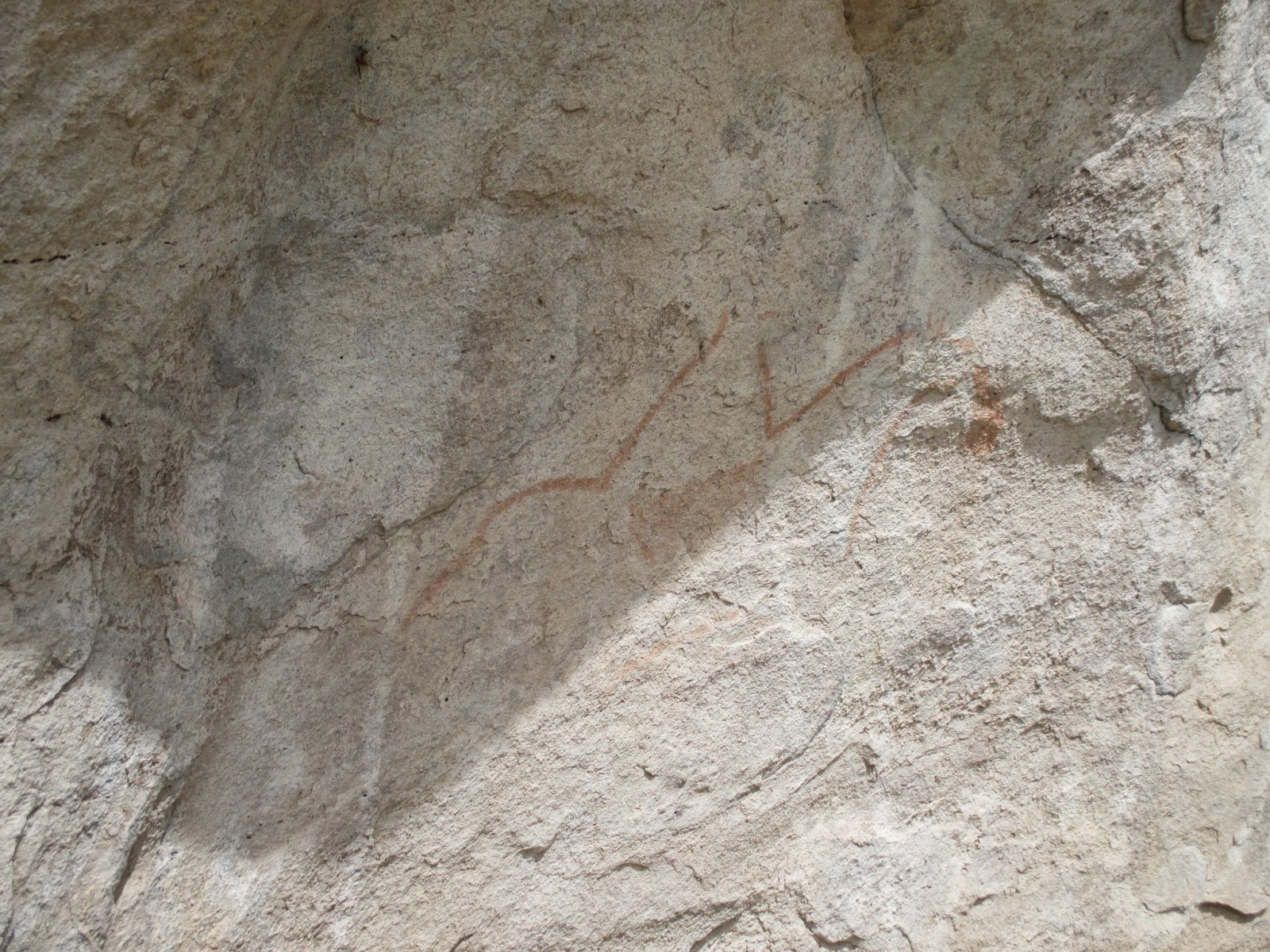 We walked over the dam, placed there to hold water for a golf course which fortunately never materialized and took a quick detour to the "puking horse" pictograph.  I've never seen a horse puke, but the pictograph was interesting. 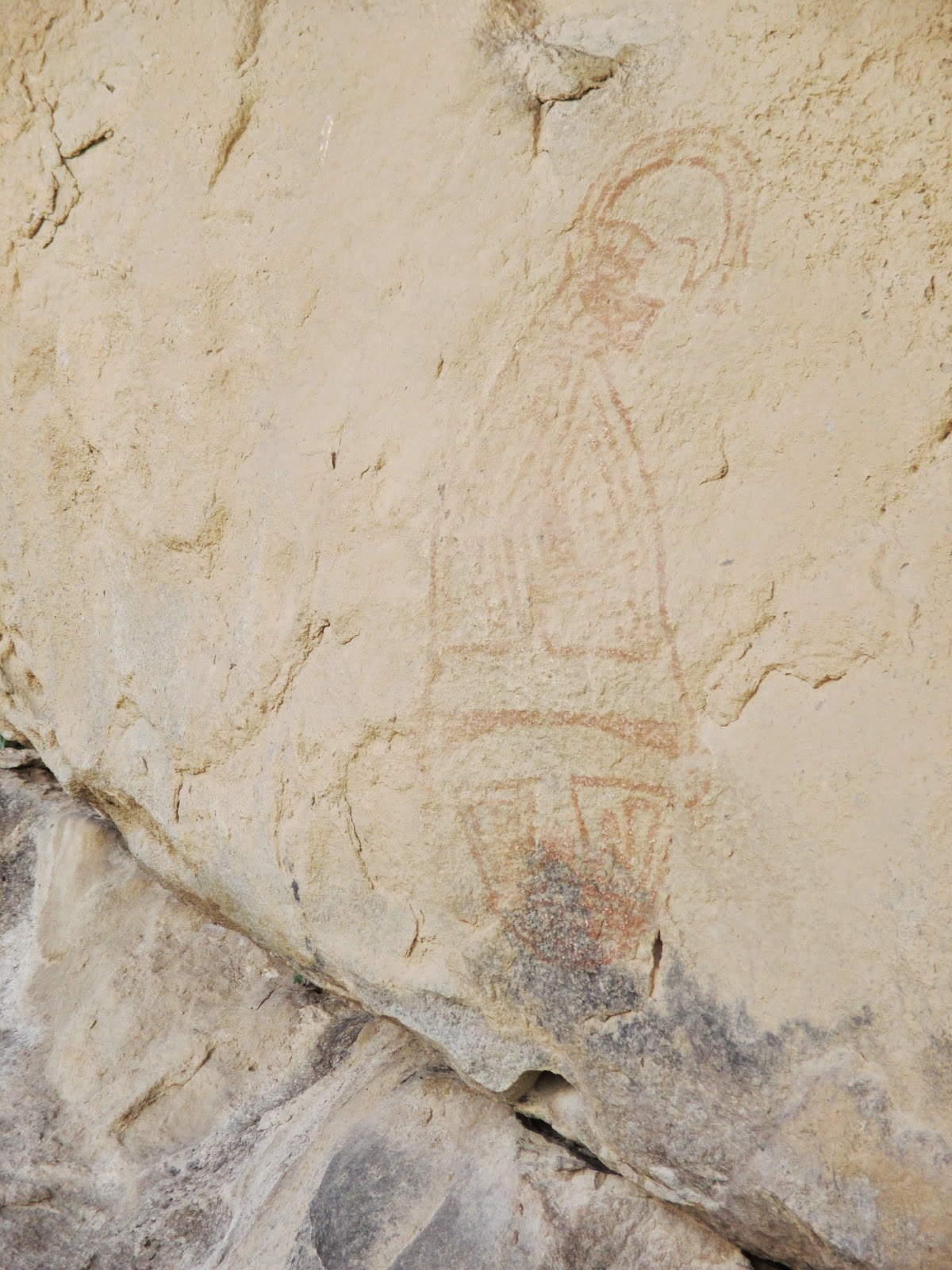 Our next stop was at the largest of the mask pictographs at Hueco Tanks.  Hueco Tanks is famous for it's rock art and it's rock climbing.  There are mostly pictographs, paintings on rocks, here but there are a few petroglyphs, carving into rocks, here as well.  After a few pictures, our tour guide continued on to the most famous pictograph at Hueco Tanks- the Starry Eyed Man. 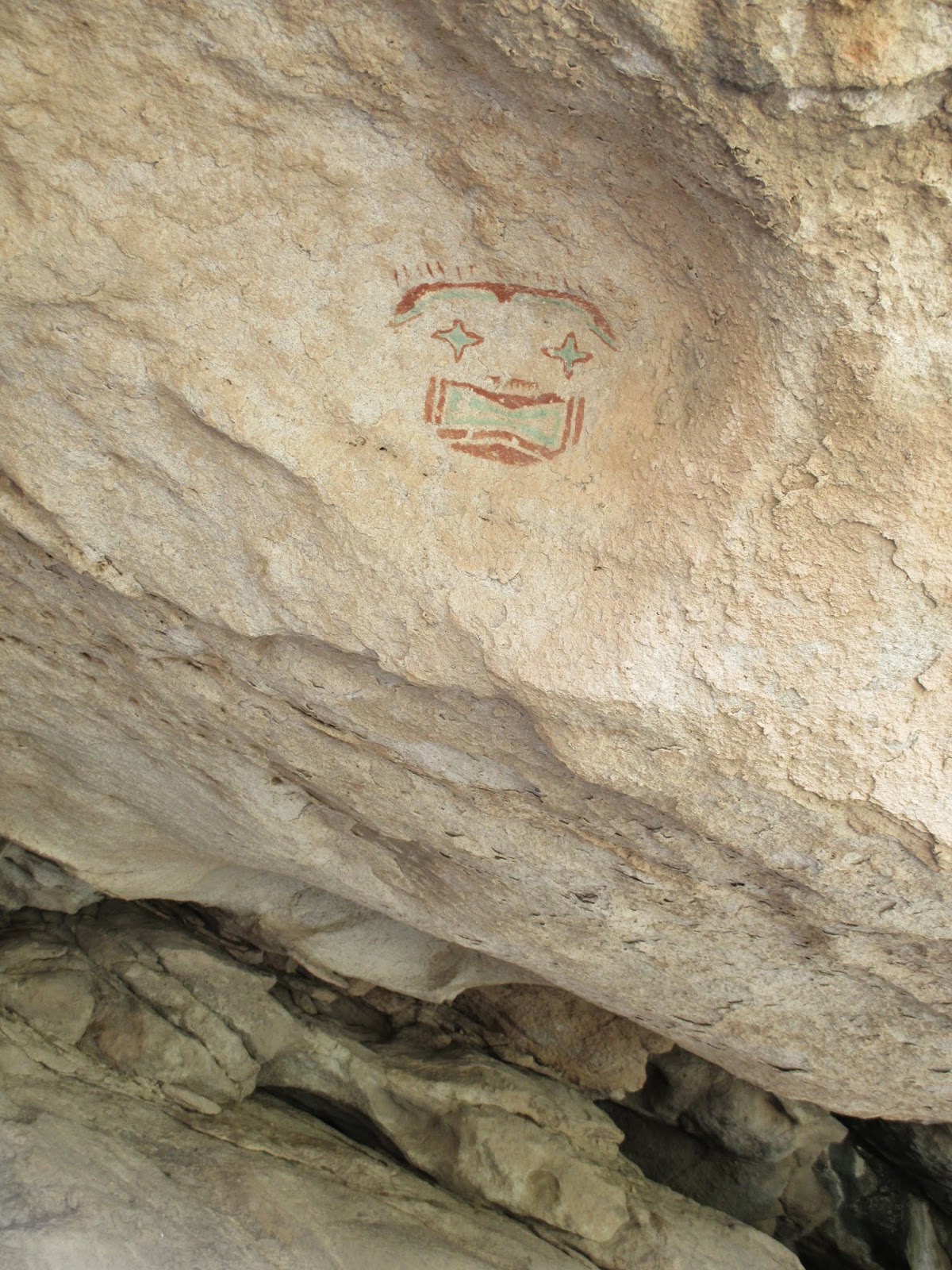 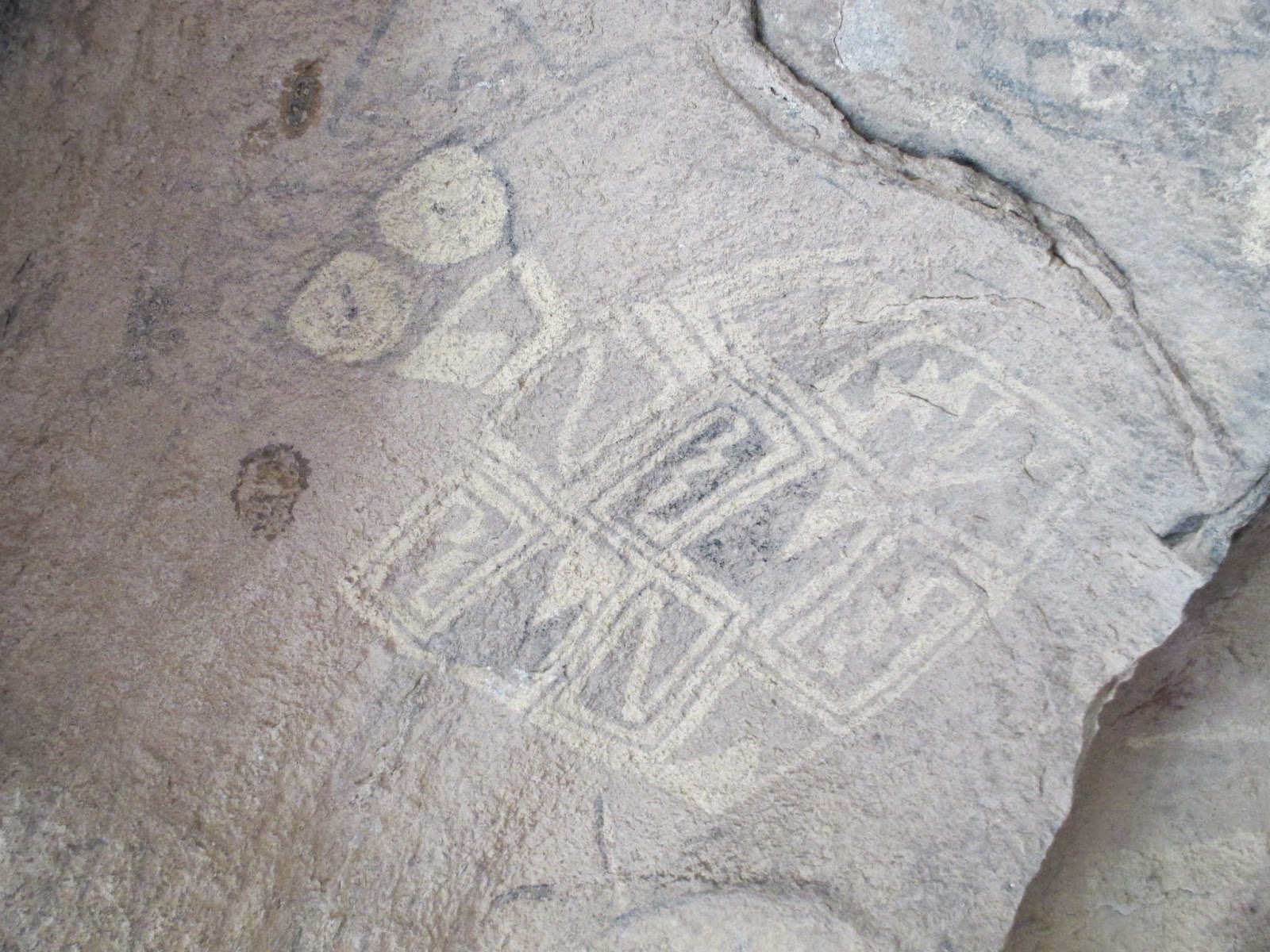 We then hiked through Tlalac Pass and detoured into a small alcove hidden by an oak tree.  The alcove has been well used- grinding holes and mutates cover about half of the floor, and on the ceiling is a large tlalac, or Rain God Pictograph.  All of the tlalacs have the zigzag motif, and many of them have heads.  We would end up seeing 3-4 more tlalacs on our tour. 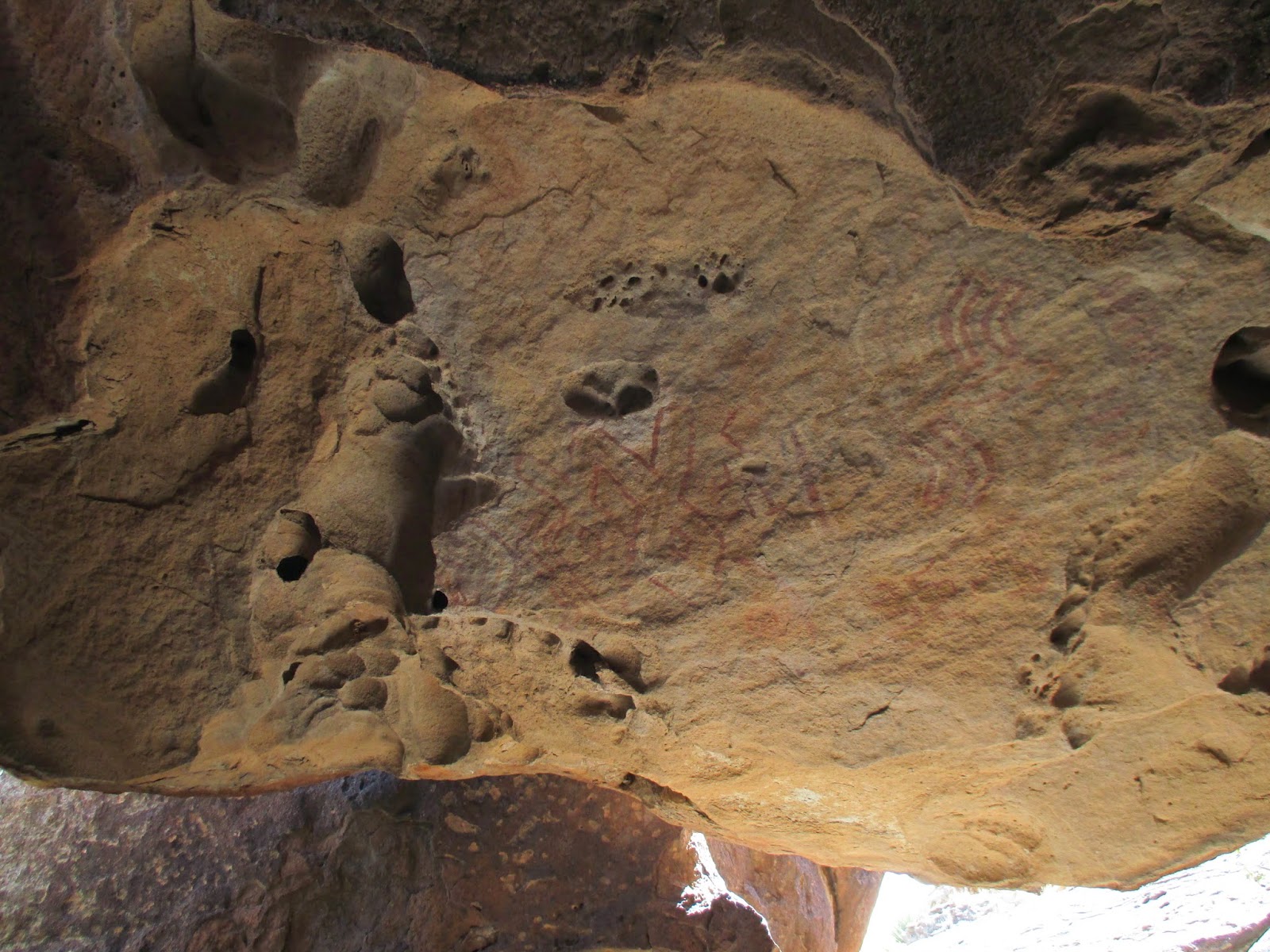 Across the trail we scrambled up to another enclosure among the boulders.  This one was bigger, but not as protected and was a low class-4 scramble to get to.  Again, pictographs adorned the ceiling. 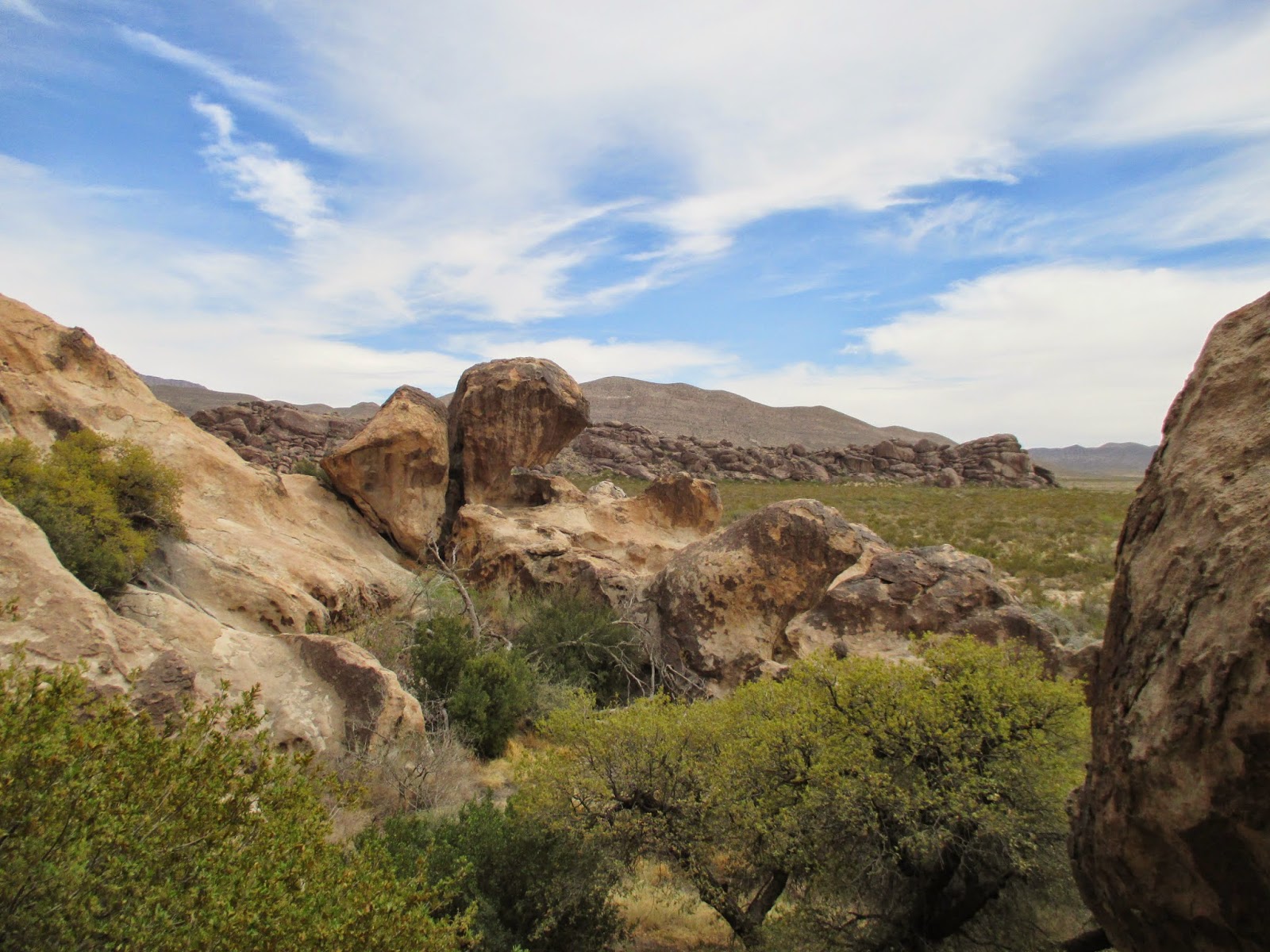 I was struck by the desert beauty of Hueco Tanks.  It's a beautiful spot!  Hueco means hollow, so Hollow Tanks.  These hollow tanks scattered throughout the area were a reliable source of water that have drawn people to the area for centuries. 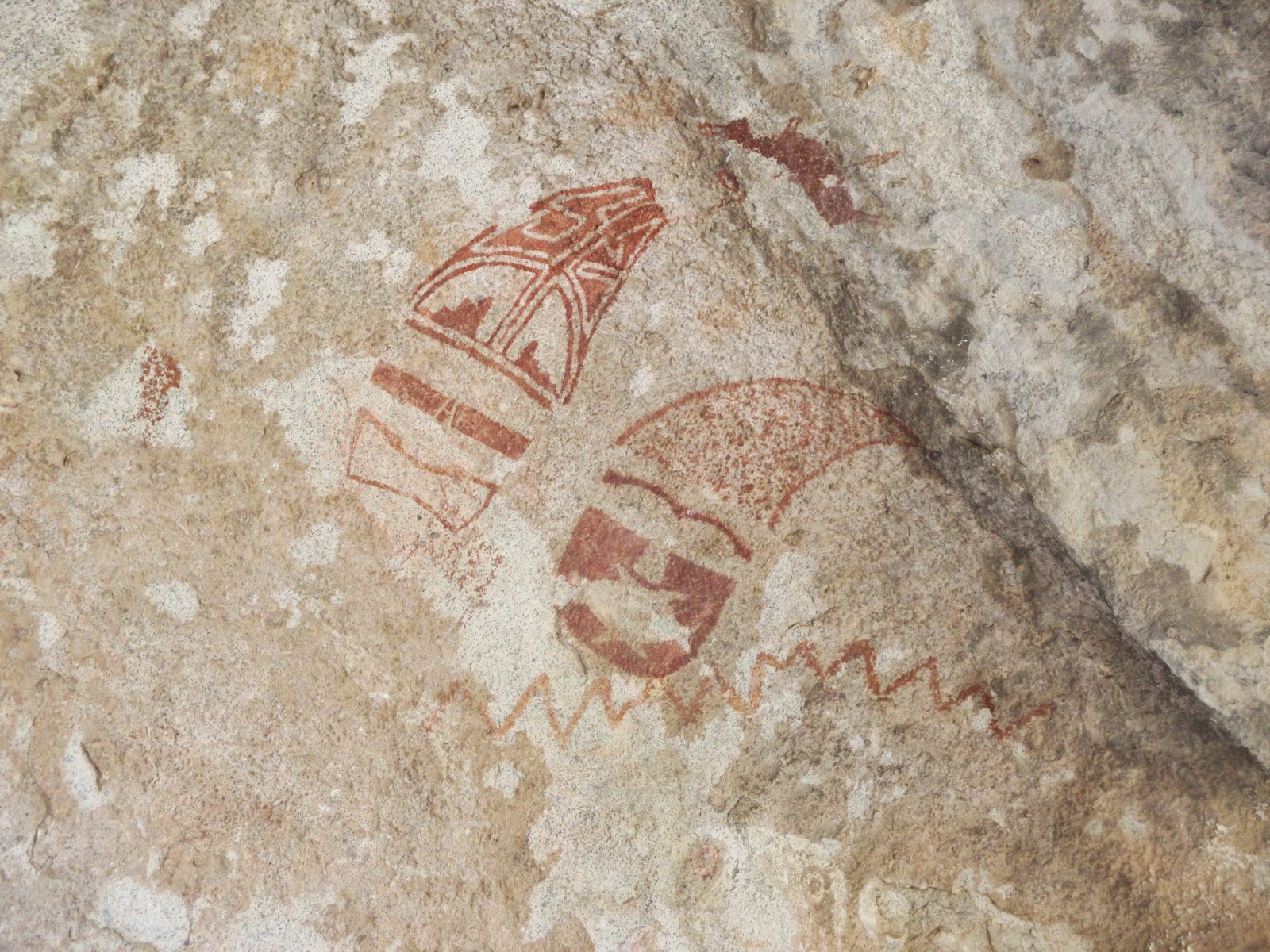 Our tour guide at this point took a vote- go back and see another spot or two, or continue on to the Cave of the Masks and a couple other pictographs.  No contest- we all determined to continue on!  Along the way the kids started to drag, so I had to be "as strong as an ox" and carry them for about half of it.  On the way to Cave of the Masks, we passed a crew of local inmates working on trail improvements.  The law enforcement brings out some supervised inmates to work on trails and improve other areas of the park.  We waved hello and kept hiking.  The decision to continue to Cave of the Masks was worth it.  There several more outstanding pictographs in the hollow in the rock, including the smallest known mask at Hueco Tanks.  Again cameras came out. 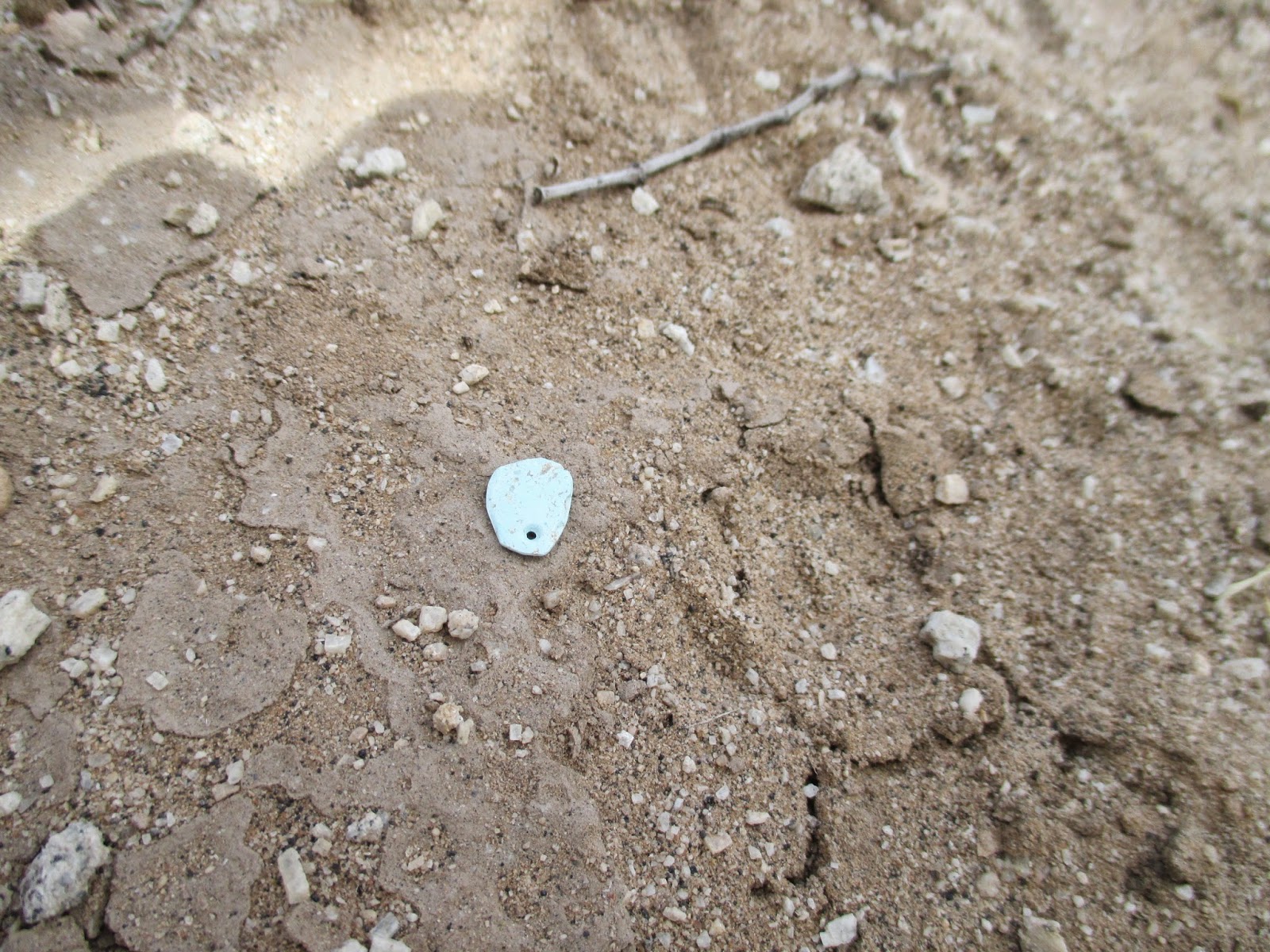 The Cave of the Masks was the last scheduled stop on our tour, but ended up not being the last surprise.  As we were walking along the side of the dirt road back to the vehicles, I glanced down and saw a small piece of turquoise in the sand.  As I stopped to pick it up, I noticed a small hole drilled in it.  Sweet!  The turquoise, about half the size of a dime was once part of a necklace worn by perhaps one of the pictograph creators.  We took pictures, and documented where it was, perhaps to be collected later by Hueco Tanks Park Rangers and added to the on-site museum.  Hopefully something cool is done with it!  The turquoise sparked a conversation with the tour guide about artifacts and how sad it is how many of them are filed away for the professionals and never really seen again.  Many years ago a team of archeologists from the University of Texas came to Hueco Tanks and did some excavations of pit houses and found a few graves.  The items they collected now in Austin "in a cardboard box" to quote the guide.  A few years ago someone from the University of Texas said they'd bring some back to Hueco Tanks to put on display, but they still haven't acted on it.  Hueco Tanks is an amazing place.  I concur with the guide and wish the on-site museum did have more of an archeology exhibit to show a glimpse of what went on here.

Nearest City: El Paso, TX
Location: N° W°
Time Needed: we spent 5 hours and it was not nearly enough time.  Maybe next time we'll have to camp here.
Difficulty: Easy- Moderate
Kid Friendly: Yes
Additional Info:  A gentleman on the tour mentioned an abundance of petroglyphs at Alamo Mountain, someplace nearby.  I haven't heard of Alamo Mountain, but it sounds like a pretty cool place.
Posted by Ben at 8:40 PM