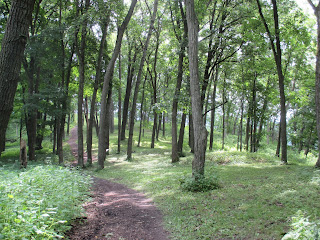 We spent a morning at Effigy Mounds National Monument.  It's a pretty park, located along the bluffs of the Mississippi River in the Driftless area of northeast Iowa.  I do have to say that I think the northeast corner is the most pretty part of Iowa.  The monument was formed to protect a large concentration of effigy mounds created by mound builders several hundred years ago.  Some mounds are round, others are linear, but the most fascinating mounds of all are the effigy mounds- ones shaped like bears, birds, or other animals. 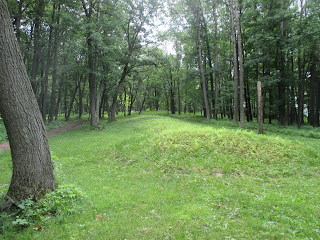 Before we arrived, my expectation was that the mounds would be outlined in lime or whitewash to help make them easier to identify.  I was disappointed that they weren't.  It can be difficult to see the mounds, since they are only 2-3 feet taller then the surrounding area.  In fact, it is amazing that they were discovered in the first place!  That said, the park protects a large collection of mounds.  Probably 90% of the mounds out there have been destroyed, many by farmers just plowing up their fields and not realizing that there was a mound there. 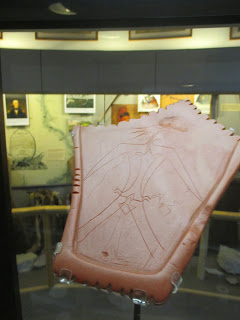 We hiked up to Fire Point and had a great viewpoint of the Mississippi River, and passed several mounds along the way.  There were lots of round mounds, a few columnar mounds, and we saw the Great Bear and Little Bear mounds too.  Some of the mounds have been excavated, while many haven't.  The museum at the visitor center has several artifacts that were found in and around some of the mounds. 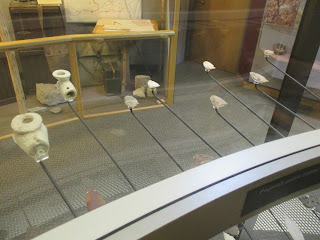 I liked the visit, but if you want to see mounds be prepared to hike to see them.