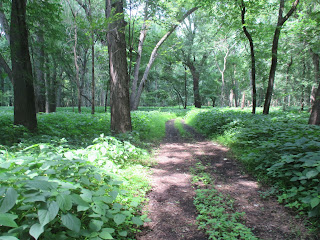 Somewhere at Effigy Mounds, I saw something about a detached unit with more mounds, so I asked about it.  They said that I was probably wondering about the Sny Magill unit, which has the largest concentration of mounds.  Yup- that's it!  They had a paper with an outline of the mounds at the Sny Magill unit, as well as directions on how to get there.  I was interested, so we carved out some time to seek it out. 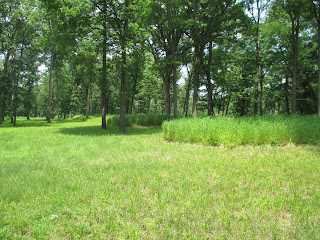 The Sny Magill unit has over 100 mounds, all located close to each other.  It's on the flood plain of the Mississippi River, about 10 miles south of the main section of the park.  There are mostly conical mounds, but also bird and bear mounds.  This page of the NPS website has a little bit about it.  I was wondering who this Sny Magill guy was, and if he had donated the land to the NPS or why there was the separate unit to the park.  It turns out that Sny is another word for slough, and Magill was a Scottish indian trader who lived in the area.  So even though his name was Donald, Sny was not his nickname.  Sny Magill, Magill's Slough, same difference!  There's a creek with trout in it, as well as access to the river all named after the old trader.
We parked at the boat launch/ river access, crossed through a gate, and came to the first of the mounds in a couple hundred yards.  The area is mowed down, but it goes quite a ways off to the north.  We didn't stay long because in late June the mosquitoes were pretty bad.  It's definitely worth a visit though if you like places that are a little untrammeled and quiet.

Nearest City: McGregor, Iowa
Location: South of McGregor on County Road X56 a couple of miles.  When the road crosses a small creek (Sny Magill Creek), turn east and park at the parking lot to the boat launch.  Go through the gate to the north.
Time Needed: 30+ minutes
Difficulty: easy, finding it is the hardest part
Kid Friendly: meh
Additional Info:
Posted by Ben at 10:25 PM