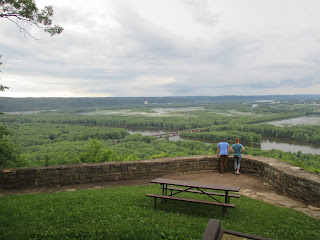 I took the week of the 4th of July off from work. We decided a few months before to go to Wisconsin and Minnesota for our big summer trip.  We originally had planned to drive up I-35 through Minnesota, visit Lake Superior, then work our way down through Wisconsin on the way home.  About 10 days before the trip though, a good friend called up and made a pretty convincing case to do the trip the other way.  He and his new bride were going to be in Minnesota for the 4th, and if we were there for the last weekend of our trip instead of the first, we'd be able to meet up.  So, we flipped the trip around and spent the first day driving diagonally across Iowa.  I do have to say, Northeast Iowa is beautiful.  It's known as the Driftless Area because it was not covered by glaciers in the last ice age, and as such it was not ground flat by all of the ice.  Instead, it's full of canyons and large bluffs, especially along the Mississippi River. 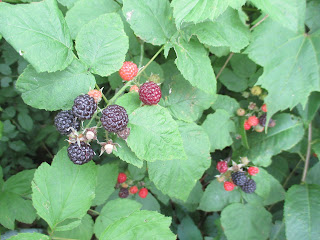 We wanted to visit Effigy Mounds National Monument, but since the monument doesn't have camping facilities, we stayed at Wyalusing State Park, across the river in Wisconsin.  It was a fortuitous choice.  After visiting Effigy Mounds and Wyalusing, if given the chance again, I'd spend more time at Wyalusing.  We nabbed one of two remaining campsites in the campground when we arrived.  Although it's a developed campground, many of the sites have thick brush undergrowth isolating them from the neighboring sites.  Fireflies were flickering as we set up camp and piled in, exhausted from hours of driving. 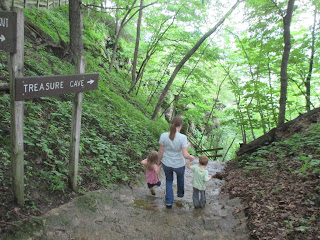 Wyalusing means "home of the warrior" in Lenape, a native language.  I personally think the park is misnamed, since the indians regarded the confluence of the Wisconsin and Mississippi Rivers, located just below the park, as neutral ground that was for trading and peaceful talks instead of a battleground.  European explorers came through the area, beginning with the famous expedition of Marquette and Jolliet in 1673.  Jacques Marquette, a Jesuit priest, and  Louis Jolliet, a French-Canadian explorer, left on their journey, which took them across Wisconsin from Green Bay, up the Fox River, then down the Wisconsin River to the Mississippi River.  They were the first Europeans to explore the upper Mississippi River- traveling  nearly to the Gulf of Mexico before returning.   They passed through here on June 17, 1673- approximately one month into their four month journey. 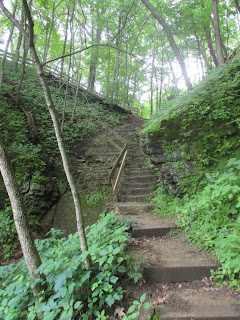 We had our own explorations to make.  We went to look at some indian mounds.  There are several mounds in the park.  We stopped and walked around some bear effigy mounds.  There are also mounds shaped like deer, birds, and turtles in the park.  The mounds are really subtle- just a low 2-3 foot difference in height from the surrounding land.  I was walking around the bear mound, trying to figure out where the head was when a shout from the kids stopped me.  They had noticed some black raspberries just off of the edge of the mowed lawn.   We enjoyed nature's abundance and ate our fill of the delicious berries.  The next morning we found some more and ate them with our pancakes. 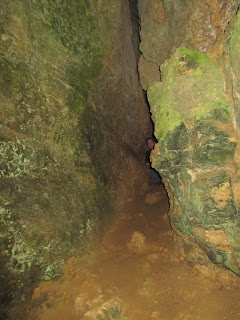 We took a short hike to see Treasure Cave.  The cave is down on the side of the hill, and the trail passes through an arch along the way.  The kids noticed lots of small frogs along the trail, so we stopped and picked a few up to look at them closer before continuing on.  There are stairs down to below the cave, then a steep climb up some stair/ladders to get to it.  Up we went. 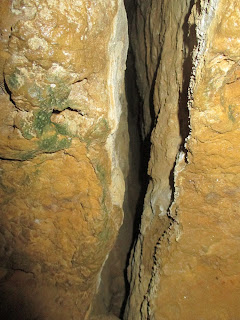 The cave was about 25 feet deep and had a nice blast of cold air coming from it.  I crawled down the tunnel to a small room that had been dug out by earlier visitors.  The room was a dead end.  I turned around and nearly back at the entrance noticed the airflow pick back up.  It came from the side of the tunnel, blowing from a crack about 2 inches wide.  Judging from the air flow, there's got to be a pretty decent cave system in there, but it's not accessible from Treasure Cave. 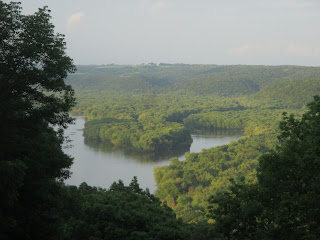 We enjoyed several other walks and especially the overlook of the Mississippi and Wisconsin Rivers. One of the evenings we were there we took the kids down to the showers.  A hot shower when camping is a nice luxury.  The kids screamed and yelled and had a great time playing.  I had a few good conversations with other campers as they remembered camping trips with their children.  Wyalusing was a great beginning to our Wisconsin vacation.