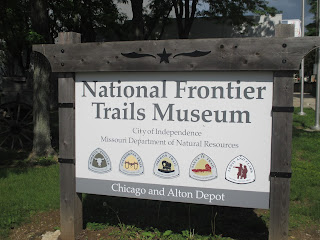 Another stop in Independence is the National Frontier Trails Museum.  We really liked this museum!  It talks about the five major trails used in the opening of the west:  The Lewis and Clark Trail, The Oregon Trail, The California Trail, The Santa Fe Trail, and The Mormon Trail.  The museum does a great job focusing on each of them and also giving a big picture overview of settlers moving west. 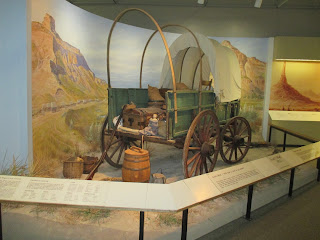 I found it notable that the five trails each were created and used for different reasons The first trail, the Lewis and Clark Trail was blazed in the name of discovery and exploration.  The Santa Fe Trail was used for trade with the Spanish.  The Oregon Trail was followed by those in pursuit of land to settle.  The Mormon Trail was created by people looking for a place they could live their religion in peace.  The California Trail was a maze of routes utilized by "forty-niners" going to California to search for gold.  While the travelers' motivations for each trail varied, all of them were looking for a better life. 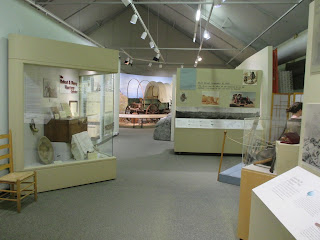 The museum had different sections.  It started out with an overview and trail map of each trail.  All of them either began in Independence, or made Independence part of the route as Independence was the edge of civilization in the 1830's.  A decade or two later, Kansas City would become and overpass Independence in size and importance, but in the 1830's, Independence had it all.  After acquainting visitors with each trail, the remainder of the museum mixed artifacts and journal entries to paint a tapestry of experiences that each traveler encountered along the trail. 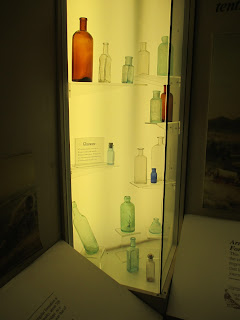 I found the writings from the pioneer journals a mixture of emotions and facts.  They'd comment on landmarks passed and notable experiences including deaths and births along the way.  Some noted humorous experiences, others focused on hardships encountered.  Some entries looked back at the lives and communities left behind, as others looked forward to the lives they would build.

It's a great little museum.  I really enjoyed it.  The kids had a good time too.  Their favorite exhibit was a wagon set up with a scale and supplies, and they practiced loading the supplies into the wagon so that they would have all they could, but stay not overload it.  They liked some of the artifacts, but got impatient a time or two while I was reading.   I'm glad we stopped here.  It's not on a major road in Independence, but it's not hard to find either.  If you find it and spend a while, you'll be better off for it.