Checking out the Sturgeons at Neosho National Fish Hatchery 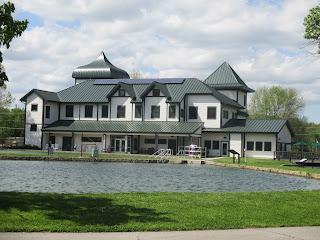 The Neosho National Fish Hatchery was a "must visit" location for us.  I love fish, and visiting fish-raising facilities is a side show of that.  When researching for the trip, I found that we could go and see the sturgeon raising facility at the fish hatchery if we called ahead.  We called and basically got told that since we'd be visiting on a Saturday,  the sturgeon center would be closed since they'd be understaffed. 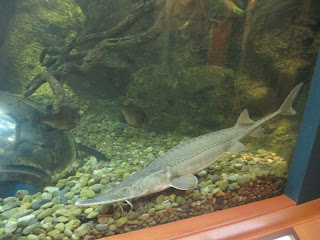 The main building is beautiful.  It's the oldest operating federal fish hatchery, and is a very picturesque building.  There's administrative offices and a small welcome desk and museum inside.  We had a great time inside, seeing several exhibits and a  few large pallid sturgeons.  The sturgeons reminded me of the visit we had a few years ago to the fish hatcheries near the Bonneville Dam in Oregon, and near Hagerman, Idaho where they raise white sturgeon.  Even though they're a different species, it's still amazing to se a huge prehistoric fish swimming around. 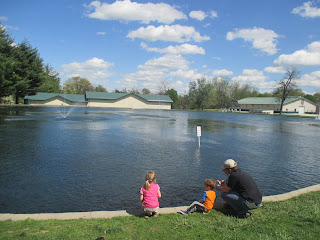 Outside the door there was a feed bucket full of hatchery food for the rainbow trout in the ponds.  At the Neosho fish hatchery, they raise rainbow trout, pallid sturgeons, freshwater drum, and fat mucket mussels.  The water supply comes from a spring in the side of the hill that comes out of a cave system.  They haven't discovered an entrance to the cave, but a few endangered Ozark cavefish have come out of the spring, so the hatchery protects their habitat as well.  The trout are raised as a sport fish.  The pallid sturgeons are endangered, so they are raised at the hatchery to help sustain their numbers.  The mussels are also endangered, while the freshwater drum are not.  The only reason the drum are raised is because they have a symbiotic relationship with the mussels.   The female mussel will actually lure the drum up close, then spray its eggs into the fish's face.  Some of the eggs attach to the gills of the drum, where they grow for a while then drop off at another location to finish growing.  It doesn't hurt the fish, but it does make it necessary to raise the drum in order to raise the mussels. 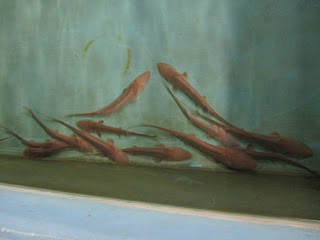 We ended up getting to take a tour of the sturgeon facility.  The biologist who we had talked with earlier in the week was on duty and remembered our calls.  When we visited with him at the information desk, he said that he could take us over to the sturgeon building for a few minutes just at closing time.  SCORE!  I love the things that I get to do sometimes when I ask!  The baby sturgeons were about 8 inches long.  He told us about how they do not keep adult sturgeons, but instead catch/trap them then keep them for a few weeks to collect the eggs, then turn them loose.  The females are more rare than the males are.  The eggs are fertilized, then conditions are monitored and adjusted to make ideal growing conditions for the baby sturgeons.  When they get to be about a foot long they are then released into the Missouri and Mississippi Rivers.

I definitely enjoyed visiting the Neosho Fish Hatchery.  It's a place that has something for everybody!