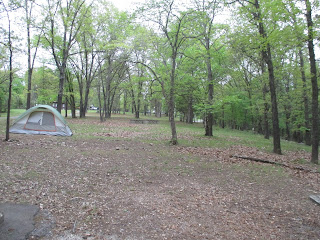 On to Arkansas!  True story.  When I was finishing up grad school, my wife and I were discussing about future career opportunities and where we could find work.  The economy wasn't so hot in 2010 and we realized that we may not get our first choice of locations, but a job was better than no job.  During this discussion, she remarked that she was good with just about anywhere- except Arkansas.  Fast forward a few years, and this same woman is now insisting that we must go and visit The Natural State.  We arrived in Arkansas later in the day then we'd intended to, so with the day rapidly fading and no pre-determined campsite, we pulled out our map and rapidly concluded that Beaver Lake was our best shot at camping near Bentonville/Rogers in Northwest Arkansas.  We pulled in to the Corps of Engineers operated campground, then decided splurge.  $20/night is a bit more than the free we usually like to spend when we're camping, but with no other options apparent, we did it. 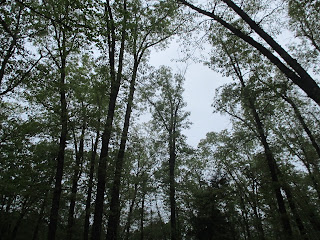 The campground overlooks Beaver Lake, an immensely popular recreation lake.  Fortunately for us April was a little bit early in the year for most people, so we had a pretty decent pick of locations.  We picked a site that was away from other campers, and had a great time.  Even though it was late April, we still saw a few fireflies on our evening walks. 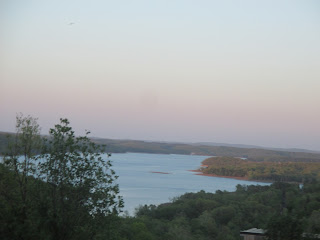 The campground is next to Beaver Lake, but most of the sites are not directly on the water, nor is the water accessible directly from them because of steep hillsides.  We did drive down to the marina and saw that it is huge with tons of boats and parking.  Beaver Lake must be really popular in the summer.  While we were there, I woke up early in the morning to what sounded like a radio playing the Star Spangled Banner.  I was initially pretty displeased, thinking that some other camper was being pretty rude at 6 AM, but as I listened longer, I concluded that it was the opening ceremony for a bass tournament that was going on that weekend.  The campground was pretty nice as far as campgrounds go.  Lots of sites, many with electricity or sewer hookups, and flush toilets in the bathrooms. There even was a shower for those who really like the amenities of home!