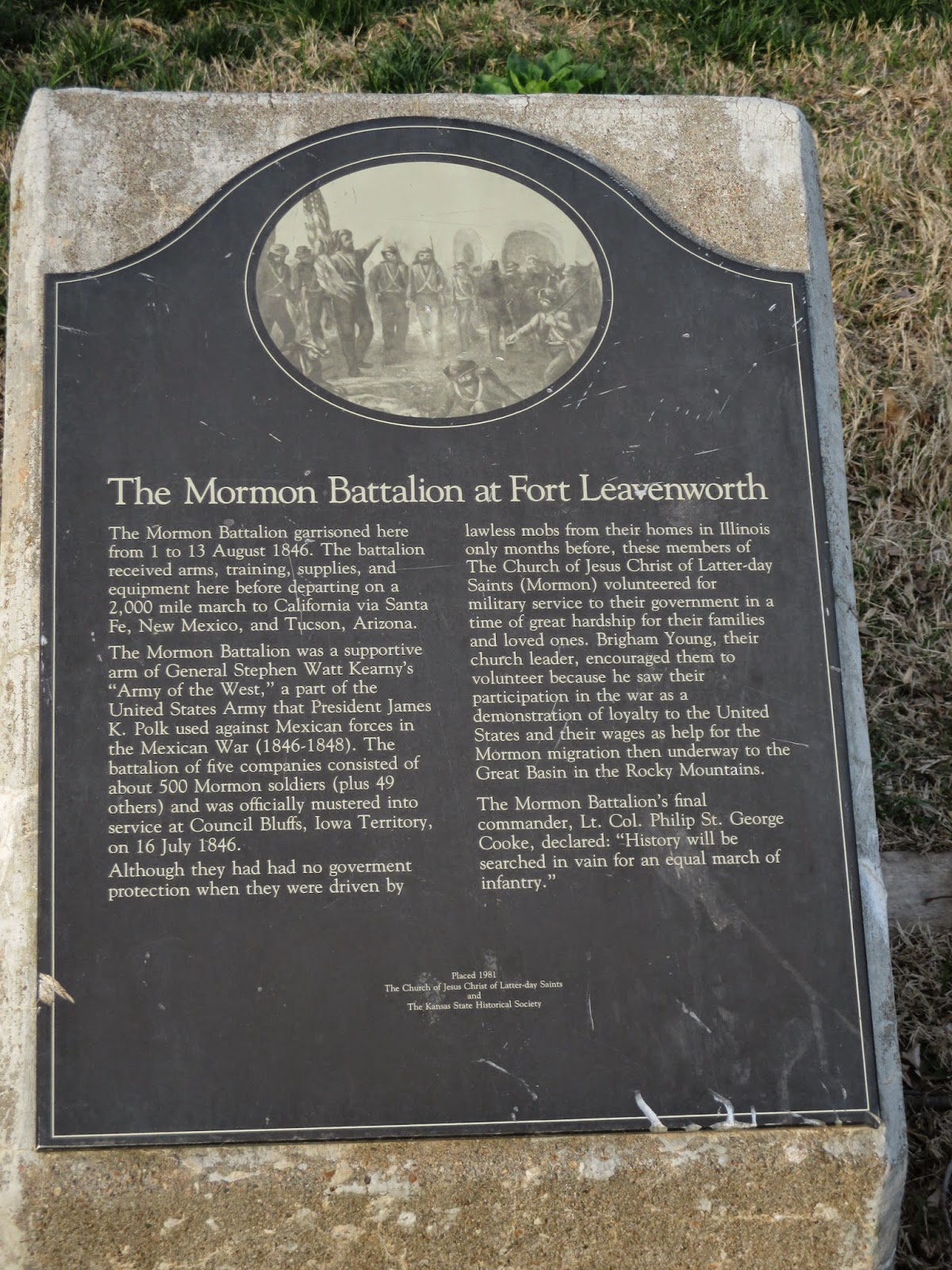 When we lived in Southern Arizona we saw a few monuments to the Mormon Battalion scattered across Cochise County.  We put Fort Leavenworth  on our "to visit" list for when we got here to Kansas.  We've done the wayside tour, and picked up a Mormon Battalion tour pamphlet. There are a few more places we need to visit the next time we go up to Fort Leavenworth, but we have completely enjoyed the history of the area that we have seen so far.

From the Mormon Battalion pamphlet :

"Fort Leavenworth became a major influence in the Mexican-American War by serving as an induction center and base from which soldiers deployed. President James K. Polk needing troops, ordered the recruitment of a battalion of Mormon men in June 1846. Once the order was received by Brig. Gen. Stephen W. Kearney at Fort Leavenworth, he sent Capt. James Allen, a regular Army officer serving in the 1st Dragoons, to Iowa Territory to complete the task.

Allen, in cooperation with Brigham Young, raised a battalion of more than 500 men in Kanesville, present day Council Bluffs.  Departing Kanesville on July 20, they marched the 180 miles along the east bank of the Missouri River, arriving at Fort Leavenworth Aug. 1, 1846, spending most of the day crossing the river on the military ferry.
During its two-week stay, the battalion was bivouacked near Thomas and Pope Avenues. The battalion was outfitted with firearms and accoutrements, and the means to carry and maintain them, but was not issued uniforms. They were issued a clothing allowance, which many used to purchase clothing items and goods needed along the trail.
For the most part the soldiers went to war in civilian clothing. They were issued knapsacks, haversacks, and canteens. Tents, cooking gear and supplies were hauled in wagons.  Upon leaving the post in mid-August, 1846 the battalion headed southwest along the Santa Fe Trail.
After arriving in San Diego the battalion completed a 2,000-mile march, one of the longest marches in U.S. Army history.  Some of the battalion’s accomplishments were helping to open trails to the West, helping Kearney stabilize post conflict California, building Fort Moore in Los Angeles and providing support to local citizens in San Diego, or what we today call civil affairs missions."
Nearest City: Ft Leavenworth, KS
Location: NE Corner of the intersection of Sumner Place and Kearney Avenue, Ft Leavenworth
Time Needed:
Difficulty:
Kid Friendly:
Additional Info: Ft Leavenworth Wayside Tours
Posted by Ben at 8:32 PM