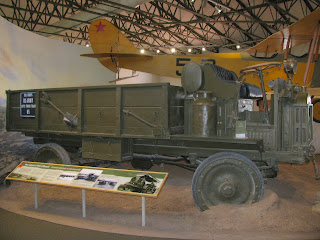 I remember reading one of those "Choose Your Own Adventure" stories as a kid about Pancho Villa.  Then about that same time I learned in a history class that Pancho Villa's invasion of Columbus, New Mexico was the last land invasion of the United States.  The crazy thing was that I never thought I'd be able to visit Columbus and learn more about the best thing to ever happen to the town.  I know that sounds crazy, advocating that an attack by a bunch of Mexicans was the best thing to ever happen to Columbus.  But it was.  If it wasn't for Pancho Villa and his crazy crowd of desperados, Columbus wouldn't have a State Park, it wouldn't be written about in a "Choose Your Own Adventure" book, and it wouldn't even be mentioned in pretty much every history book on the United States.  Think about the last small town you drove through.  Did it have any of that stuff?  I rest my case. Columbus is still a small sleepy town.  The museum at the state park is pretty cool.  I'm glad we visited.  We learned how Pancho Villa got chased all over Mexico by the US Army, but that he basically didn't get the spanking he deserved.  The US Army in the meantime used automobiles for the first time in a situation of war, used mules and pack animals as well (for essentially the last time), used airplanes, and learned a whole lot of stuff about supply chains and other capabilities that would come in handy a few years later when they entered World War 1 to save the French and give the spanking for Pancho Villa to Otto Von Bismark.  So if you get the chance, go to Pancho Villa State Park.  And remember that you really do get to choose your own adventures. 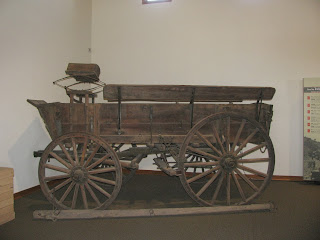 Oh, about the interrogation.  You will have to go through a Boarder Patrol Checkpoint when heading north from Columbus.  I've been through various checkpoints dozens of times, but I must have looked suspicious or caught one particular agent on a bad day, or maybe it was slow and he needed someone to talk to, because he asked me tons and tons of questions. My answers went something like this "Yes, those are my children.  Yes, I do live in Arizona.  Good to see you saw my plates.  Oh, my Utah drivers license.  Yeah, we recently moved, but I haven't had the chance to get a new one.  Yes, I am a Mormon.  No, I am not a Mormon Librarian.  What's the concern about Mormon Librarians?  Nope, I am not a Mormon Librarian.  Did I mention that we (Mormons) believe in obeying the laws of the land.   Yes, those are my kids.  But they don't have drivers licenses....Well, have a good day sir!"  Eventually he waved me on through, leaving me somewhat confused about went on in that interrogation.  Now do you know what a Mormon Librarian is?  I'm still confused.