Digging Around at Rockhound State Park 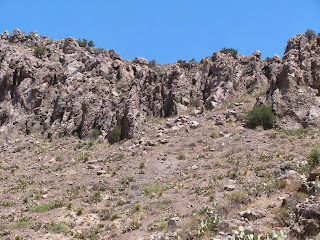 While on our New Mexico trip, we stopped at Rockhound State Park near Deming.  We had read about it and thought that it sounded fun to go see, and dig up some cool rocks.  We arrived, toured the small visitor center, then set out to see what we could find.   I can't say I was that impressed with Rockhound State Park.  The best areas have already been picked over for years, leaving behind areas that take some serious digging to get to anything good.  Your best bet might be looking around one of several rockshops in the area. 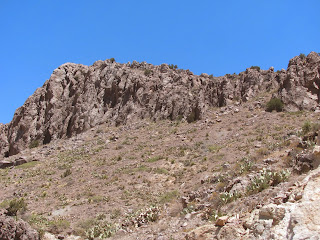 We climbed a hillside, found several small and lower quality rocks and pieces, and basically had the whole place to ourselves.  If you're looking for a place to take the kids, I can't recommend Rockhound State Park.  But if you are in the area, driving to the Spring Canyon State Park (better described as a sub area of Rockhound), a few miles south of the main park you will have the chance (slim, but still a chance) to see a wild ibex, which were released into the Florida Mountains, which are similar to their native range in Southwest Asia.  We didn't see any.

Nearest City: Deming, New Mexico
Location: N° W°
Time Needed: A lot or not much.  There's not much in between though.
Difficulty: Varies
Kid Friendly: Not like we had hoped.
Additional Info:
Posted by Ben at 8:49 PM