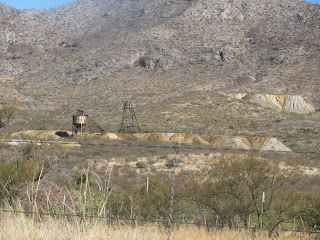 Over Veterans Day we took a drive over to see Gleeson, a ghost town near Tombstone.  It and Courtland make two ghost towns that are near each other pretty much smack-dab in the middle of Cochise County.  We visited both ghost towns and found each experience to be pretty different.  Gleeson can be pretty much summed up as "for sale". 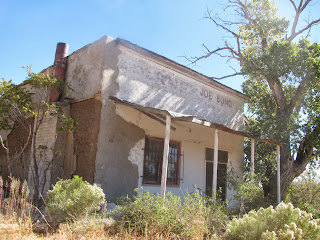 There are numerous buildings still standing in Gleeson, most of them in a state of suspended decay.  When the mines played out, most people picked up and left.  The buildings in better shape were held onto longer, but Gleeson isn't exactly experiencing a real estate boom.  Over half of the remaining buildings are for sale. 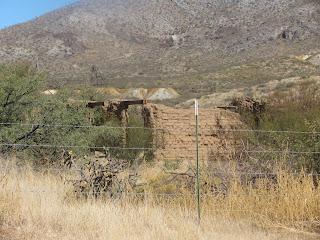 This old ruin is not for sale as far as we could tell, but it is fenced off like most of the other buildings.  I didn't see anywhere that was open to exploration.  So, whatever you can see from the road is what you can see as far as I could tell.  There were lots of signs telling you where not to go! 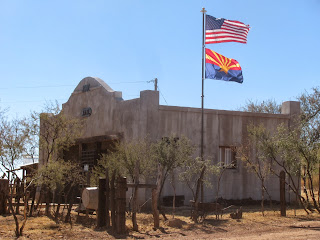 The best looking building was the old Gleeson Jail.  It's also for sale.  I think it was constructed at about the same time the Courtland Jail, 5 miles away on the other side of the ridge, was built.  So Gleeson might be worth driving through, but Courtland has a lot more to offer if you're into ghost towns.