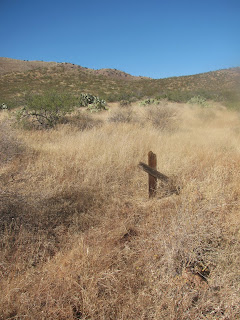 We had a camping trip over Veterans Day and took a stop by Courtland the first night.  We didn't have anywhere in particular to go, so we ended up camping near an old mine, with the aim to do more exploring in the morning.  After breakfast, we wandered around and looked at some of the foundations of the mine buildings, climbed on the dumps, then packed up to go see more of the ghost town.  Our first stop was at the Courtland Cemetery.   It's small and there are no signs directing you to the lonely spot out in the desert.  It's a small cemetery, with many of the graves only marked by a pile of rocks. 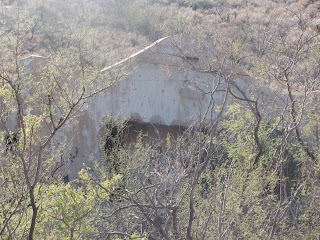 We then went to see some of the buildings.  The Courtland Jail is probably the most famous structure of the town, so we went to see it first.  Unfortunately, some low-lifes and druggies had found the place first and had spray painted the place with drug references and other materiel that isn't needful to repost.  Back when Courtland was more of a town and less of a ghost, the jail was used more to calm down rowdies and sober up drunks then it was used for anything else. 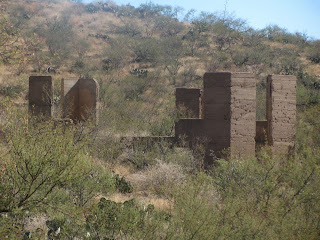 There are several other old buildings still there that the desert hasn't reclaimed yet.  Most of them are only walls or foundations though. 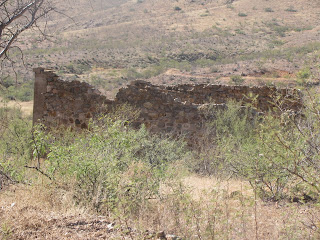 Courtland is a place that would be good to visit if you're not in a hurry.  We didn't spend as much time as we could have, and I'm sure there is a lot to see hidden in the brush and the desert growth.  Take some time and hike around and see what you find!  In addition to silver, maybe you could find some turquoise in one of the nearby mine dumps! 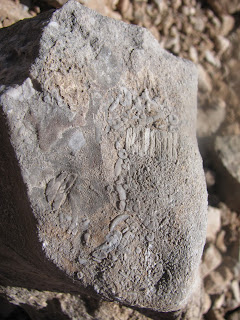 The only treasure we found was near the jail.  As we wandered around on the hillside out back we found some fossil bearing limestone with some crinoid stem pieces and other fossils in it.