The Treasure Box Mine 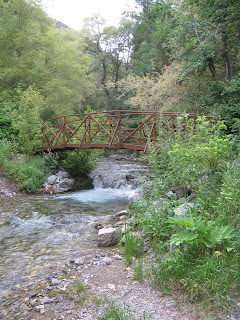 After taking a break for 2 weeks while our car was getting worked on, it was great to get it back.   Yeah, cars are expensive and basically a money-pit, but it sure is nice to have the freedom that it brings with it! 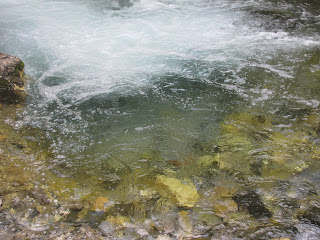 About 5 years ago or so, I was looking at a topographic map of the Salt Lake City area and noticed the Treasure Box Mine on it.  Life happened in the meantime, and I wasn't able to make it up to it.  Since I was back in Utah, and had the time (and it was an even day), the Treasure Box Mine was the destination of choice.  We made it to the bottom of City Creek Canyon at 9 AM.  The gate was locked.  We drove around the Memory Grove park once more, and back to the gate.  Again it was locked.  Just as we were about to throw in the towel, the gatekeeper arrived. We paid our $3 and drove up the canyon.  Wo-Hoo! 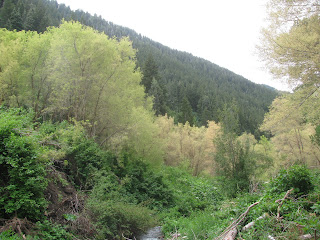 It's 5 1/2 miles from the gate to the end of the road at Rotary Park.  It's one of the options for people who want to hike Little Black Mountain, Grandview Peak, or Lookout Peak.  The lower end of the canyon is quite popular with runners, joggers, & the like.  The further we got from the gate, the more solitude we had.    We reached the end of the road, parked and loaded up for the hike.  Before we loaded up though, we noticed a huge patch of thimbleberries that were ripe for the picking.  We spent a few minutes pulling the raspberry-like berries off of the plants and eating them.  They were a little tart, but really delicious. The little one didn't want to leave. 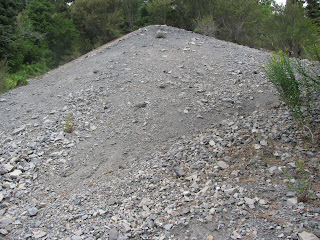 The hike was a blast.  It started out on what was essentially an old road.  I was expecting to have to wade across the creek, but there are a few bridges that cross, removing the option of getting my feet wet.  Pretty soon, the old road fades away, and a singletrack trail is left.  It didn't seem like the trail gets a lot of use.  Some spots were pretty overhung with vegetation. We soon found our turnoff from the trail and did some light bushwhacking to the mine. 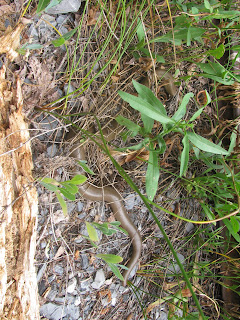 We climbed the tailings pile to take a break at the top.  Shortly after arriving, a snake decided he didn't want to be there anymore.  It was my lucky day- a rubber boa!   Several years ago I was looking around the DWR Website and noticed that rubber boas are native to Utah.  I had wanted to see one since then, but in all the time I've spent outside, I never had.  This one was about 18 inches long, and determined to find a quieter spot.  I followed it for a few minutes, then let it go on its way in peace.  It was definitely a great day- and I hadn't even looked around at the mine yet. 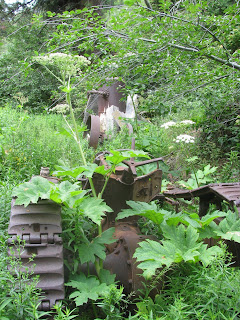 There was an old Ford tractor, a pump, and an old boiler at the mine.  It was really cool poking around and seeing the old artifacts.  I'd like to know the story of the old mine- why did they just leave the stuff here?  How deep did the mine go?  What year did they stop working it?  The little bit I do know, was that they mined lead and silver. 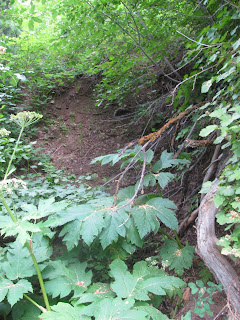 Unfortunately, the mine is collapsed.  There was water flowing out of where the tunnel should be, but there was no entrance to allow exploration. 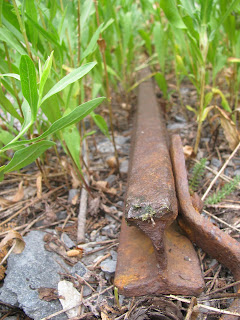 I also liked the old cart rail on top of the mine dump.  Most of the mines out there no longer have the cart rails, but this one still had one rail. 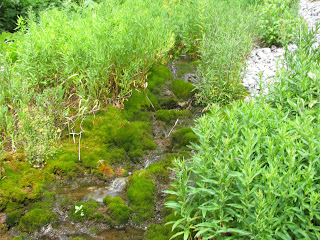 You can see the water trail down the side of the mine dump.  It's now overgrown with mosses and plants.  Since it's an old lead mine, I wonder what the water quality is that flows from the mine.  It flows directly into City Creek, and from there into the Salt Lake City water supply.  It looked clean and clear, but who knows! 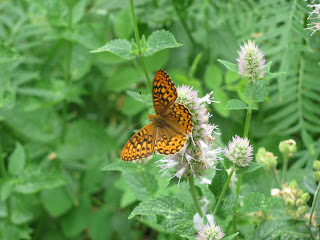 On the hike back down, we enjoyed the meadows and the butterflies.  We found a small patch of wild strawberries, but they weren't ripe yet, so we left them unpicked. 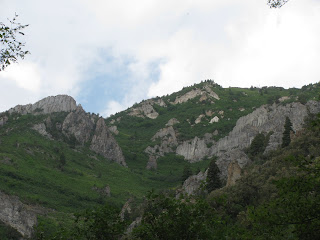 The views are great- especially looking upward to the outcroppings on the mountainsides. 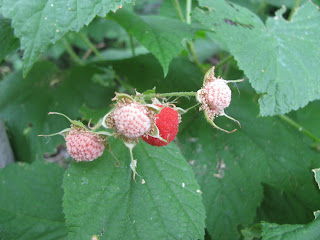 Back at the trailhead, we again focused on raiding the thimbleberries. We all were able to collect and consume several handfuls of red ripe berries.  We picked all of the berries we could that were close to the road.  There were also larger patches that went higher on the mountainside, but we left those ones alone. 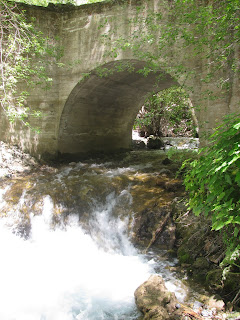 We walked down to look at Weeping Rock and the bridge over City Creek.  The bridge was built in 1922 and is one of my favorite bridges.  It's so picture-esque.    I looked for fish in the creek as well, and saw a trout hiding in one of the calmer pools.  Since it was naptime, we loaded up and headed out.  What a great hike and morning!  I think upper City Creek is one of the great unknown spots of Salt Lake.  It's a great alternate destination from some of the other more well-known and crowded canyons.

Nearest City: Salt Lake City, UT
Location: N° W°
Time Needed: It took us 3 hours out and back
Difficulty: Easy while on established trails.  Moderate while routefinding beyond that.
Kid Friendly:
Additional Info: This hike rocks.  City Creek Canyon is open to cars on even days.  Odd days are closed to cars, but open to bicycles.  Upper City Creek Canyon is closed to dogs.  There is a $3 charge to drive your car up the canyon.
Posted by Ben at 3:25 PM