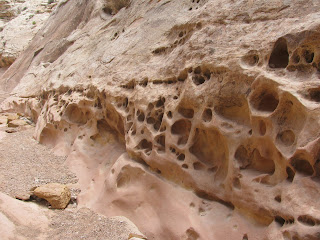 After the great Burr Trail Fiasco, we had to decide if we should head home the most direct route possible, or if it was ok to play a little bit more.   After looking at the maps, we decided that the most direct route home was only about 40 miles less than the the route we wanted to take.  Hmm...cut the trip short, or play another half-day...cut the trip short, or play another half day...cut the trip--NAH!  It just wouldn't be right to do something like that!  So after a great night's sleep, we picked up camp and set off toward Goblin Valley. 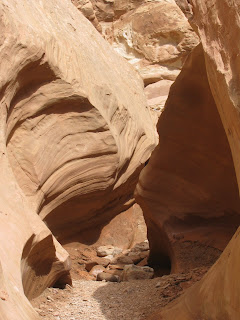 We decided to stop at Little Wildhorse Canyon to give the kids a taste of another slot canyon. Actually, Little Wildhorse is the introductory slot canyon for a lot of people.  With easy access, sculpted narrows, easily surmounted challenges, and a short entry hike, it's easy to see why it's such a popular slot.   Some people turn it into a loop hike in conjunction with Bell's Canyon, but after doing it once about 5 years ago I quickly decided it's not worth doing again.  Bells Canyon never really slots up, and the hike across the top of the triangle isn't very fun.  Why do LWH just one way, when doing it in reverse adds to the fun? 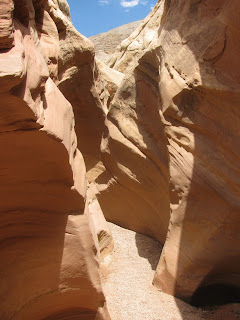 The kids really enjoyed the canyon- especially the first set of narrows.  The second set of narrows was full of water.  I bridged over the top and went a short way further up the canyon then turned around to tell everyone else that the water section was short.  Ultimately we decided not to go further.  There were just too many kids who were close to naptime that going further would have been more effort than it was worth. 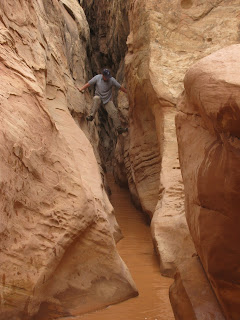 The way back down the canyon was still fun.  We paused again in the narrows for some more stemming practice.  It was pretty sweet because even the youngest one was able to do some stemming.  The kids thought they were pretty hot stuff.  I always enjoy watching kids having fun.  Even though we didn't do it all, this is a great little canyon. 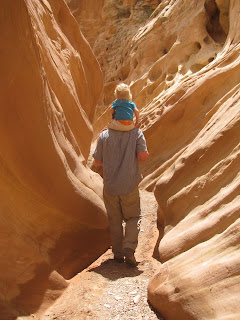 Nearest City: Hanksville or Green River, UT
Location: N° W°
Time Needed: 1-3 hours
Difficulty: Easy-Moderate
Kid Friendly: Yes- most of the time
Additional Info:  Most of the time, the biggest obstacle is the crowds of other people.  Most of the queuing will generally occur at the narrow places in the canyon.  Go early or late to have the canyon to yourself.  You also could find water in the slot and some short up/downclimbs among other things.  As with all desert hikes- bring enough water.
Posted by Ben at 5:02 PM