The Burr Trail - or The Most Expensive Trip Yet

After hiking Headquarters Canyon, and having a quick lunch at the Muley Twist Trailhead, we continued on.  The plan was to drive the Burr Trail to Boulder, then either hike to Calf Creek Falls or drive the Devils Backbone Road, or something else.  As fate would have it, we ended up doing something else that was entirely unplanned. 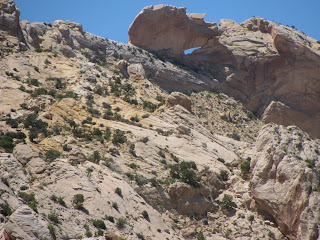 A little background- our car has had a little problem for the past 3-4 years.  It burns oil. There's nothing on the ground, but sometimes after a longer drive, it would leave a nice thick plume billowing out the tail pipe for the first little while after starting it up again.  We'd had it looked at with no luck, and other then burning oil, it hadn't had other problems.  It even passed emissions tests.  So, I kept an eye on the oil level, and kept driving it.  Finishing up graduate school was more of a priority then chasing a ghost somewhere in my car's engine. 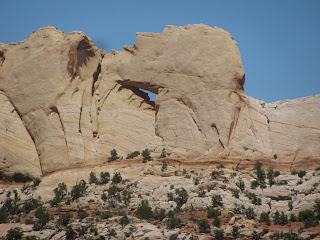 At some point, the deferred maintenance catches up to you. Our point was driving up the switchbacks on the Capitol Reef end of the Burr Trail. We lost some power and the "Check Engine" light started flashing.  Oops!  We were glad my brother-in-law was driving right behind us. I wasn't going to stop on the slope, so we pushed up to the top, found a parking area, then looked over everything and couldn't see anything wrong.  I wasn't going to wait out there for a towtruck, so we limped on to Boulder, in hopes of finding a mechanic there.  The Burr Trail was really pretty, but I was more concerned about the car then looking at scenery.  We got a few pictures of Peek-A-Boo Arch above the switchbacks, but that's it.

We made it to Boulder.  No mechanic.  They do have one in Escalante.  Not wanting to go further from home, and seeing that we'd made it as far as we already had, we opted to drive over Boulder Mountain to Torrey, in hopes that there would be a mechanic there.  As it ended up, we found a mechanic in Bicknell who looked the car over, said he couldn't fix our car (we pulled in a little after 5 on a Friday and they close at 6 for the weekend), but after looking over it, he said we'd be able to make it home alright, but there was a misfire in one of the cylinders.  We made it home, dropped the car off at the mechanic, and picked it up last week.  The car's all better, but now my wallet hurts.