It's kindof amazing how adventures get a mind of their own and just sprout out of little ideas. A while back we picked up a new cookbook (Barbeque, Biscuits, & Beans) that's all about cowboy cooking. It's great, complete with tasty recipes and colorful pictures. Recipe books without pictures are like long weekends with nothing to do. Anyway, there's a recipe in there for prickly pear jelly that looked rather unusual. So I just tucked the idea in the back of my head. Fast forward to more recently when we found a patch of prickly pears with lots of ripe fruit. It was on the side of a cliff, and some other stuff, but that's not the point. The point was it had lots of fruit to accompany the usual "pricklys." 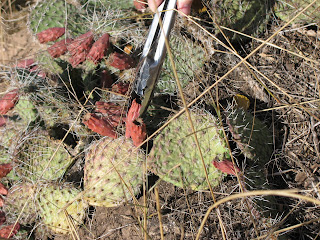 We came back with some tongs, a bag, and gloves to harvest the patch. The tongs worked great! We didn't get pricked at all! We ended up getting about half of a gallon of the little red pears. Now the pears weren't big, they were about the size of a thumb. And they had itty-bitty pricklys all over them. 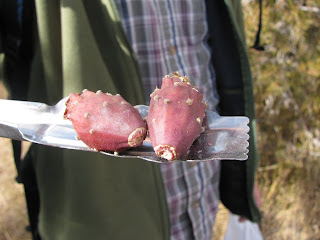 So, we brought them home, soaked them in cold water, and peeled the skins off of them. They're full of little black seeds. We put them in a pot. It's a lot of work to peel them. Also, rubber gloves are recommended, but we didn't have any. It took a while to get the pricklys out of my fingers. 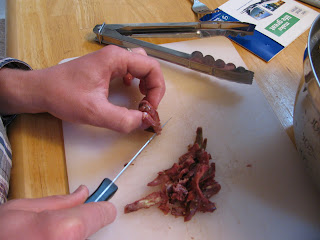 After they were all cut up, we boiled them for a while, then poured out the juice to use to make prickly pear jelly. 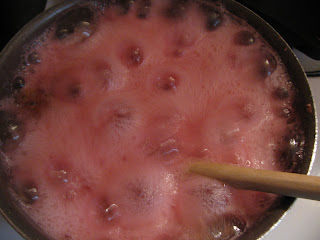 The jelly is unlike any jelly I've had before. It tastes more wild than other jelly, but kindof sweet. It turned out a beautiful reddish color. Yum!
Nearest City:
GPS Coordinates:
Time Needed:
Difficulty:
Kid Friendly:
Additional Info:
Posted by Ben at 3:29 PM