Yesterday was absolutely beautiful. After finishing up with schoolwork and a few other things, I couldn't resist the call of the trout stream anymore. Sometimes you just know it's a killer day to be out. My instincts didn't neglect me. 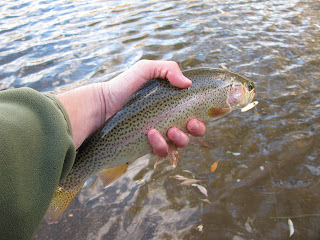 I made it to the river about 4, one of my favorite times to be out. The first hole didn't produce, much to my surprise. I pulled this healthy cutt-bow out of the second. It was fat, wide, and colorful; a healthy fish. I was expecting a brown, but I'll take one like this anyday! It ended up being the largest of the day. 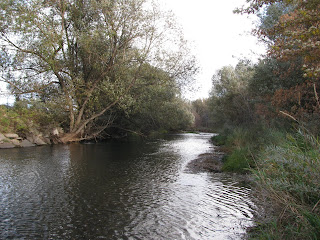 It was great being down on the water while I could hear traffic, horns, and sirens off in the distance. Ahh, sometimes it's not hard to know that you made a good decision! I'm sometimes amazed that I've only seen one other person fishing this stretch. 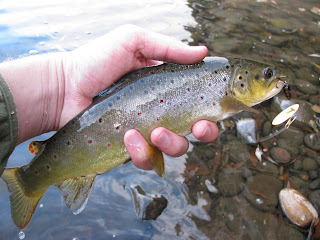 My next fish was super fun. I watched him follow the spinner in and hit it. He made a few runs and jumped a few times. What a great fish! I got him in, then tried to get out the camera. Getting the camera was a struggle, so I set the fish back in the water and he unhooked himself before I could get a picture. The third one was a decent brown. 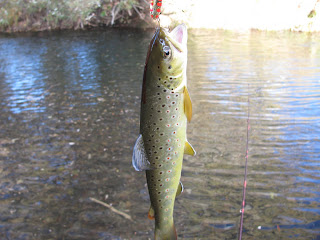 I worked my way upstream and caught number 4. The fish today were extremely acrobatic. Most of them tried flips and headshakes when they were airborne. Where's a cameraman when you need one! 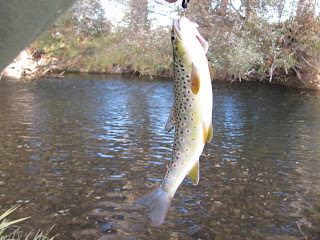 Several months ago, I took my canoe through here and it gave me a whole new perspective on this stretch of river. I discovered several fishy looking spots that aren't as apparent from the bank. I continued on and exploited a few of these areas, pulling several more brown trout out of them. 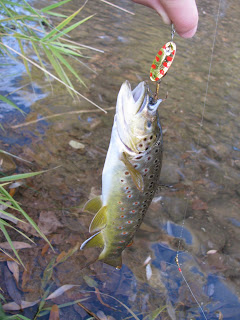 This one took a good look that was a little too close. I carefully unhooked and released it. Hopefully it doesn't go blind in the one eye. 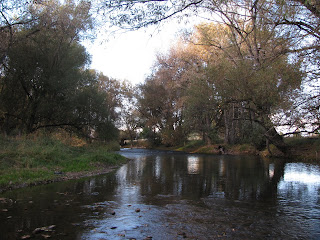 I wasn't completely engrossed in the fishing, I took some time to enjoy the scenery as well. What a beautiful perfect day! 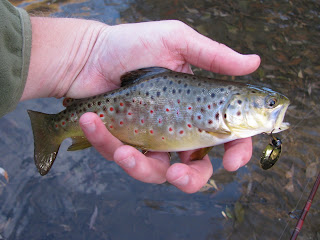 The last fish I caught was the smallest, but reminded me of a little football. I really liked the colors and spotted pattern of his sides. Oh yeah!
I was out of time, so I almost regretfully took down my pole and headed home. Some days you just can't do anything wrong. I walked in the door and there was a pan of fresh brownies and two beautiful girls waiting for me. Life is good.
Nearest City:
GPS Coordinates:
Time Needed:
Difficulty:
Kid Friendly:
Additional Info:
Posted by Ben at 10:01 AM