In Search of Greenbacks

On Monday morning neither of us had to work so we headed up to Zimmerman Lake, which is about 1.5 hours from home. Ben is a fish lover at heart. He has his list of fish that he is wanting to catch, and so yesterday we went off trying to catch the Greenback Cutthroat Trout. 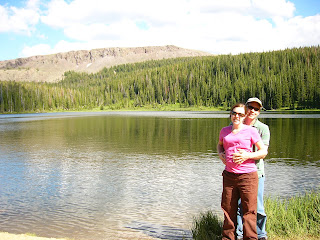 Us in front of Zimmerman Lake
Ben has educated me on this particular fish, apparently the Greenback is the Colorado State Fish, and it is also listed as threatened under the endangered species act- at one point Greenbacks were declared to be extinct. So of course, because of its rarity and closeness to where we are living, Ben decided he needed to catch one of these beauties. On the hike up to Zimmerman

After arriving at the Zimmerman Lake trailhead it was about a mile hike in to the lake. Once we arrived at the lake we immediately saw quite a few of these fish swimming around in a stream that was right below the lake outlet. The fish in the stream spooked really easily though, so although I did get one to bite, it immediately swam into some roots and got my line all tangled up and escaped. Ben also had some close calls as well, but no fish out of water. 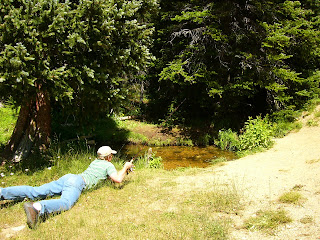 Ben sneaking up on the easily spooked fish

So we headed up to the lake and after not having any luck where we were, we hiked around the lake and cast every so often to try our luck. No luck. We weren't even getting any bites.

But then- after trying some different flies and lures we found something that did work. On Ben's first cast out with a panther martin he caught a beautiful Greenback that was a nice size. 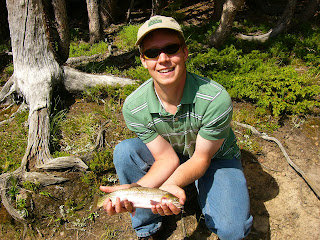 Ben's first catch!
So of course I had to change to a panther martin as well. And after my first cast got snagged on something I put on a new panther martin, cast out, and caught one! 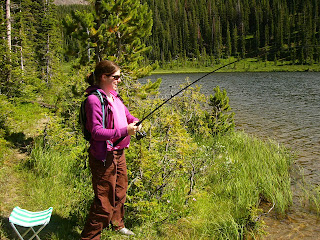 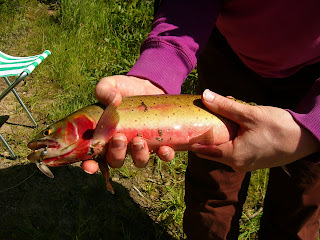 What a beauty!
Ben proceeded to catch this same fish just minutes later.

There was no eating of these fish (they are threatened after all), so we threw them straight back, but they sure were beautiful! What a great day!

Ben's #1 fish he wants to catch is a Golden Trout- he says they are more beautiful than the Greenbacks- now I want to catch one too!