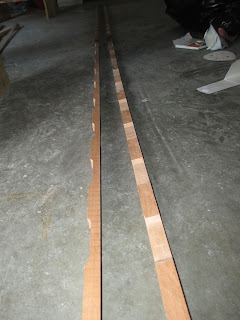 Now it's time to install the inwales!  I cut mine several months prior to this and they've been collecting dust in the meantime.  If you're lucky enough to have one piece inwales, you won't have to splice two or more pieces together.  I had to put a scarf joint in at the midpoint of the canoe.  The joint goes top to bottom of the inwales, rather then side to side.  It's less visible that way.  It takes 6-7 inches of overlap to get a solid bond between the pieces.  If you want scuppers, they also should be machined into the inwales before they are installed.   The scuppers, or cut away pieces of the inwales have 3 purposes.  They reduce weight, they add convenient gear tie points, and also allow water to drain out when you turn the canoe over.  You do not want scuppers on the outwales, since the outwales will help to turn away water and keep it out of the canoe.

Two quick bits of advice about the inwales.  First, make sure the spacing is such that the seats can be attached, with front and back of the seat both aligning with solid parts of the inwales.  Second, do yourself a favor and put a coat or two of varnish on the scuppers (and only the scuppers!) right now.  They'll never be as accessible as you have them before they are installed. 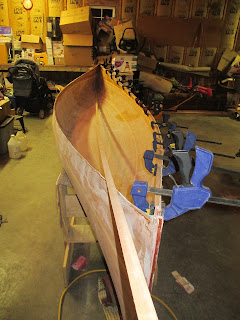 Once your canoe is ready and the scuppers are ready, it's time to install the inwales.  Do it one at a time, and take your time.  First, wipe down the top 2 inches of the hull with an epoxy solvent to get rid of the epoxy dust from sanding.  Then use lots of clamps and clamp the inwale in, about 1/4 inch below the top of the hull.  Get it how you like it, then mix up a batch of thickened epoxy.  I unclamped one half of the inwale, then applied the thickened epoxy to the non-scupper part of the inwale, reclamped, then screwed a #4 (I think it was #4.  Whatever size it says in Canoecraft!)  screw into each spot, from the outside of the hull.  I placed each screw in relatively the same place to each scupper, since the outwale will be screwed on and I wanted a nice even spacing and rhythm for those screws. Don't forget to go back once you've placed all of the screws to wipe the squeezed out epoxy from the top and bottom of the inwale! 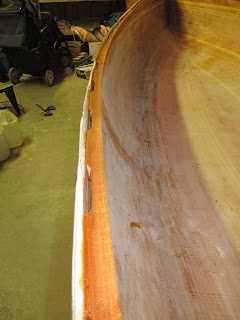 Do it for all of the spots, along one inwale, then repeat for the next inwale.  Once the first inwale is screwed on, you can remove the clamps and use them to install the second inwale.  That way you don't need to  have lots and lots of clamps. After both sides are installed, your canoe is getting even better looking then it was before.  Next up: outwales.