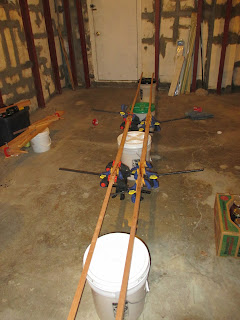 While I was waiting for the inwales to cure, I prepared the outwales and decks.  I had 8' cherry boards that I made my inwales and outwales out of, so since my canoe is 16' long, it means that for the outwales I needed to epoxy at least 3 pieces together.  The curve of the canoe plus the overlap of the splice was greater than two 8' lengths combined.  I decided to put a 4 foot section in between the the two eight foot sections for each outwale.  That way the outwales would be longer then the canoe, and the splices on the inwales and outwales would be staggered, instead of being in the same location relative to the length of the canoe.  Does it ultimately matter?  Probably not.  But staggering the joints made sense to me.  I cut an angled 7 inch section off of the ends of each piece- but was sure to make sure each angle aligned and married up with the corresponding piece next to it.  Again, the cut on each was made such that, when installed, the joint angle is not visible from the top.  Then I epoxied and clamped the pieces together. 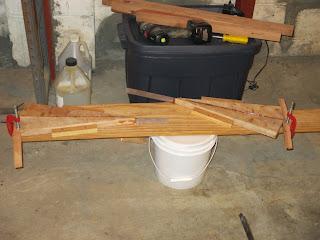 I also prepared the decks.  Angled cuts of quilted cherry, with an accent strip of walnut down the middle.  I did the best I could to make the grain lead my eyes to the end of the canoe.  Epoxy the pieces, then clamp it securely in a jig made specifically to hold it firmly.  Be sure to use packaging tape under the joints so you don't glue the deck to your jig!  After the epoxy had set up and cured, I cut a curve on the handle side of each of the decks, then rounded it over with my router.  Then I sanded the decks and outwales down to prepare them for installation. 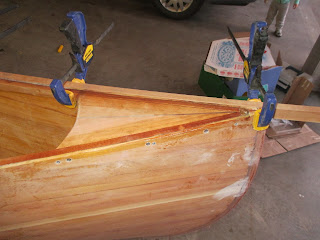 A quick note on installing the trim.  I don't think it really matters if you install the inwales, outwales, or decks first- it all comes down to personal preference. BUT, there is an order that makes installation easiest and leads to results that I can't argue with.  First install the inwales, then install the decks, finally install the outwales.  Doing it in this order allows each of the parts to nest together, and hides screws the best.  You can see the screws in the picture above where I've clamped one of the outwales on to the canoe.  When I installed the other outwale, all of those screws were hidden underneath it.  It's a big bonus to not see any screws when you're done!

So dry fit the decks and make sure they fit at the correct depth.  You don't want them to be above or below the inwales.  Since the inwales are wider at the top than the bottom, I had to mark the angle,then prepare it to fit neatly together.  It doesn't have to be perfect, but any discrepancies are best if on the bottom side.  Once you like where you have things positioned, predrill three holes on each side of the deck, going from the outside of the hull, through the inwales, and into the decks.  Be sure to do so at an even interval so you don't hit these screws when you install the outwales! Put strips of packaging tape along the bottom of the inwales,  then slather each side of the deck with thickened epoxy.  Fit it in there, clamp it, and drive your screws in.  I think I used #8 screws that were 2 inches long. Once all of the screws are in, you can unclamp things.  Reach under the deck and firmly press the packaging tape that's on the inwales to the underside of the deck.  This will take any epoxy that has been pressed out, and even it out and make a smooth finish.  Wipe down any epoxy that has come out the top.  You can now work on installing the outwales- no delay is needed for the epoxy to set up since the decks are screwed on securely. 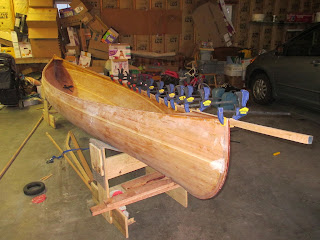 The outwales are pretty easy to install.  They do have a few things to keep in mind, but they're pretty basic.  Installation is as important as finished visual appearance, so if you make appearance the priority, the installation will fall in line.  I marked the centerpoint of the canoe with the smooth edge of some blue painters tape pressed on top of the inwales.   Do this on each side.  Then do the same on the top side of both of the outwales.  You can then clamp the outwales on one at a time, and using the center point reference, and the locations of the scuppers on the inwales you can determine the spacing for your screws to secure the outwales.  I marked mine so that the screws would be centered in the solid block between scuppers.  I also marked vertically the midpoint between the  top and bottom of the outwale.  Once everywhere is marked, remove the outwale and drill your pilot holes.  You  can leave the screws showing, or countersink them and fit plugs into the countersunk holes.  I chose the countersink and plug method so there would be no exposed screws.  After I drilled my holes and countersinks, I was ready to install the outwales. 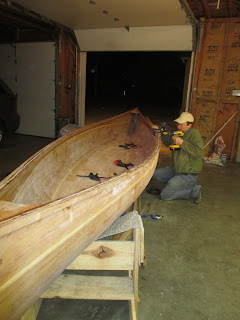 Installing the outwales is pretty straightforward.  Mix up a batch of thickened epoxy, spread it on a two foot section of the outwale, then starting at the midpoint and working toward the end, clamp it down with a few clamps, install a screw, then leapfrog the clamps along until you get to the end.  You'll need to epoxy a few more sections as you go, but it goes quickly.  As you work, make sure the horizonal alignment between the inwale and outwale stays even.  Repeat each side until both of the outwales are completely installed.  Again, be sure to wipe off any epoxy that has oozed out as the outwales were clamped and screwed. 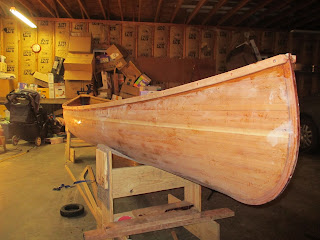 Once the last screw is in the canoe looks great!   It took me about 3 hours to get both decks and both outwales installed.  I finished up late, then called it a night.  After everything cures you can come back and install the plugs.
Posted by Ben at 9:33 PM