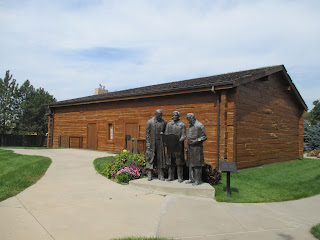 While we were in Omaha, we drove across the river to Council Bluffs to visit the Kanesville Tabernacle.  The tour was pretty cool.  The original tabernacle was built in 1847 out of green cottonwood logs.  Because the logs were green, the walls warped and the building was demolished within a few years of being built.  In 1997, the replica was built on the site out of cottonwood logs by a historical society in Council Bluffs to celebrate the 150th anniversary of the Mormon's arrival in Utah.  It was then donated to the Church. 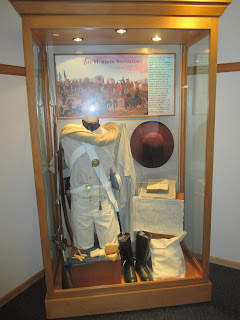 The tabernacle has a small Mormon Battalion exhibit, since Council Bluffs was where the Mormon  volunteers came from before reporting to Ft. Leavenworth to begin their epic march.

Two notable events happened at the Kanesville Tabernacle.  The first one was Brigham Young being sustained as 2nd Prophet and President of the Church of Jesus Christ of Latter-day Saints in December 1847.  It changed my perspective of Mormon history a little bit, since I had always assumed that Brother Brigham had led the Saints west to Utah, then stayed there in Salt Lake City, except for when he went to St George for the winter.  Nope.  He led them to Utah, then quickly turned around and went back to Iowa.

The second notable event was it was where Oliver Cowdry, one of the Three Witnesses of the Book of Mormon came to a church meeting after being separated from the church for a number of years and began the process of rejoining the church.