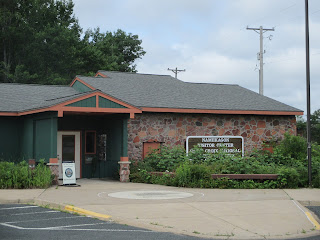 We visited the St Croix National Scenic Riverway twice on our trip, and it's a beautiful river.  I would have loved to get out and spend a couple days canoeing and fishing.  Our first stop was at the Namekagon Visitor Center in Northern Wisconsin.  We enjoyed learning a little bit about the river that forms most of the border between Minnesota and Wisconsin.  The rangers were very informative about boating and fishing regulations, as well as knowing that seeing bears along the river is much more common then wolf sightings are.  Much of this area was logged back in the lumber baron heyday, and logs are still fished out of the river occasionally with the end mark of the various mill that had cut the tree and sent it down the river before it sank.  Actually, is at least one lumber reclamation company on Lake Superior strictly dedicated to finding and retrieving the old-growth logs. 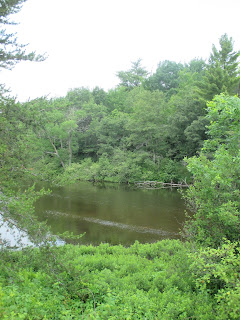 Up north the river is a beautiful little river, flowing past tree-lined banks, with sandbars and occasional islands.  Because the river is so long, the standard NPS brochure doesn't have enough information on it to really be that useful beyond being an overview, so they have smaller river maps which break the river down into 7 or 8 segments.  I picked up the smaller maps as well. 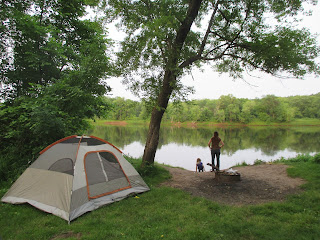 A little later in the trip the smaller maps came in greatly handy.  In addition to showing distances and river hazards, the map also shows launches & take outs and camp sites.  We were somewhere between Duluth and the Twin Cities and wanted to stop for the night before we got there.  I pulled out the maps and found a primitive campsite nearby on the Minnesota side of the river. 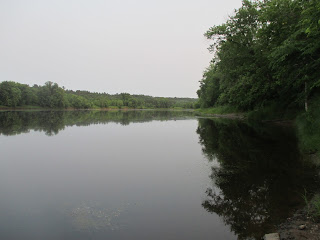 We set up camp and had a great view of the river, here much wider and slower.  The kids thought it looked like a big lake, but when I showed them that the water was gently flowing they thought it was the biggest river ever.