Canoe Building: Setting up the forms 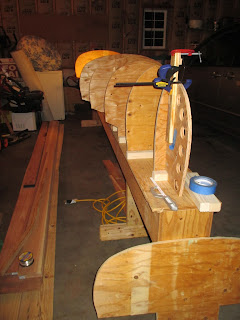 My wife told me earlier this year that this is the year.  Now is the time to stop talking about someday building a canoe and get it done.  I was all set to begin on the process earlier, but we had some issues with our living situation that made moving a higher priority then starting on a canoe, so getting started got pushed back to July.  The good news from it all was out new place has a huge detached garage that will be a fantastic workshop and space to build the canoe.  I don't have to worry about workshop noises keeping the kids up in the evening, or sanding dust finding its way inside, or epoxy and varnish smells.  So really the detached garage is a nice arrangement.  And the simple fact that we no longer have tobacco smoke drifting in to our unit makes a huge difference in quality of life.  The downside of it all is I didn't get started on the canoe until late July. 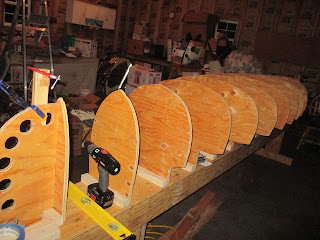 I've had the forms and strongback made for about a year now, but never had assembled them.  I assembled the box beam then mixed up a small batch of epoxy and glued it to the garage floor where it would be nice and level.  I then marked out a centerline on the beam that stretched from end to end.  The centerline on the beam and on the forms/station molds will line up and help when I mount the forms to the beam.  I basically followed the process outlined in the Canoecraft book.  I then marked the beam at 1 foot intervals, measuring from the center of the beam.  I attached the stems at the ends, then clamped a line between them that would provide another straight reference for attaching the rest of the molds and keeping them straight.  Then I started screwing the cleats to the beam.  Basically, a 2x4 cut in half, and then cut into 1 foot sections, the cleats provide a better screwing surface between the forms and the beam.  I lined them up, and screwed them at each 1 foot spaced line, but I made sure to screw them on the outside of the line.  This is a small detail, but it's a potentially important one.  Putting the cleats on the outside, allows the forms to be screwed to the inside, so when I'm done with the canoe on the beam and need to remove it, I'll be able to access and unscrew the forms more easily.
Putting the forms on is a really enjoyable process.  It's where the first real glimpse of the canoe's shape comes alive.  I lined the center line on the form up with the center line on the strongback, then used a level and the upper stringline reference to make sure it was straight and then firmly clamped the form to the cleat.  Then I'd screw the form to the cleat with a couple of screws.  I worked in from the ends and within an easy evening's work the canoe was in the workshop both hinting of the possibility and the amount of work that still remains.
Posted by Ben at 6:39 AM