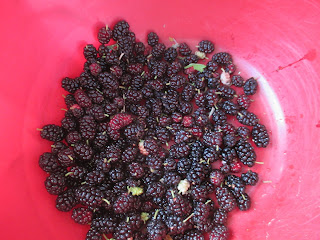 In late May and early June we had a great time picking mulberries.  Here in Kansas, they're just about everywhere.  They're in the city, staining the sidewalk purple, or along the back alley ignored by virtually everyone.  They're in the country too, most commonly along fence lines and dirt roads.
Most people don't know that they're edible.  They're ripe when they're almost black and  quite frankly, you could spread out a tarp under a tree and shake it and they'd fall off and make picking easier for you.  They look kindof like blackberries or raspberries, but instead of growing in a bramble, they grow on trees.  The berries also have a small green stem, while raspberries and black berries do not. The stem is edible.  We picked quite a few.  Mostly we picked them here and there and ate every berry we picked almost as soon as it was in hand.  One Saturday we did find a tree that was heavily laden, so we spread out some sheets underneath it and did give it a good shake.  We ended up with enough berries to go home and make some jam, as well as a pie or two and bag a few bags for our freezer.  That was a good day.  What do mulberries taste like?  They're sweet but without any tartness.  They taste somewhat like a blackberry or a raspberry if you subtracted the tartness or tang.  They're not quite as good, but they're delicious nonetheless.  One of the best parts about them is the fruit ripens over a several week window, so you can go back several times to pick them.  I think that's part of why they're not really available in stores.  One of our favorite things to do with mulberries other then eat them raw, is to bake them into a pie with cherries to make a cherry-mulberry pie.  Sometimes pie cherries can be too tart, so the mulberries counter the tartness to result in a delicious pie.  Next year go ahead and pick them.  You've seen that tree staining the sidewalk way too many times.  You'll be glad you did.

Incidentally, mulberry trees were imported to North America to provide food for silk moths.  I've never seen a silkworm on a mulberry tree though.
Also there's a nursery rhyme about a mulberries. All around the mulberry bush the monkey chased the weasel.  The monkey thought it was all in fun POP! goes the weasel.  Consequently, I tease my kids when we pick mulberries that I'm looking for a monkey and a weasel.
Posted by Ben at 10:23 PM