Having a great time at the Buffalo National River 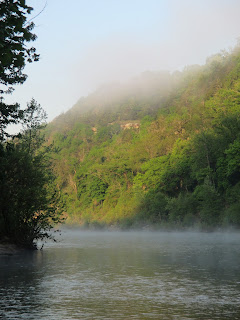 After leaving Little Rock late, we drove north for the Buffalo River.  In Marshall, we turned off Highway 65 and on to Highway 27.  We had reviewed the map and planned to camp at the Woolum primitive campsite and river access, but since it was late, I didn't pay that much attention, and after driving for a lot longer than we intended to, we pulled out the map again.  I should have continued up Highway 65 to get where I wanted to go, but since we'd doglegged east, the Spring Creek river access and primitive camp area looked pretty appealing to me.  We turned off the highway and on to a dirt road, passed a few cabins, then slowly descended for 3 miles or so to the Spring Creek camp area.  I shined my headlights around briefly, saw a spot that looked good enough, put the Subaru in park then turned off the ignition.   The tent went up quickly, and I was asleep. 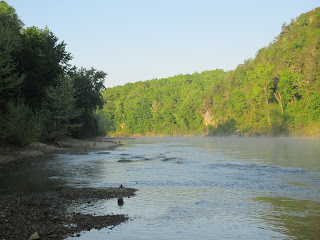 I woke up early, like usual, and couldn't resist leaving the tent.  I've always liked maps, and on more than one occasion I had eyed the Buffalo National River and wondered what it would be like. Since I was finally there I couldn't stay inside any longer.  I needed to see what the Buffalo River was all about.  I padded quietly down the road to the misty river.  Wow!  The Buffalo River at first glance is amazing!   The cool blue-tinged water rushes eastward through tall hills with an occasional cliff or rock outcropping.  Long blue pools separated by choppy fast water runs repeat until the river disappears in the morning fog behind a distant bend. 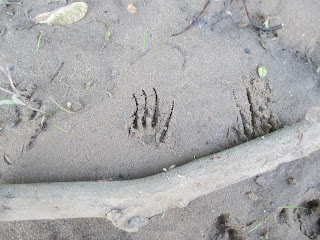 I couldn't resist wandering the banks, so I headed west, upstream, ducking under and over branches and trees along the bank, but occasionally wading into the water to get past the woody obstacles.  I spotted footprints from several animal species in the mud, but most of them were familiar to me.  Birds, deer, and squirrels made most of them.  Then I spotted an unfamiliar one.  An animal with small feet, with long claws had passed this way.  I'm certain it was an armadillo.  I crossed a gravel bar, more undergrowth, a sandy beach, and another gravel bar.  I finally decided to turn around.  As I made my way back to camp, I decided that the Buffalo River was way more amazing then I thought it would be.  I need to come back to float it to really understand more about it.  The biggest unexpected discovery though was that it flowed backwards.  In the maps I had looked at, I had always imagined that it flowed from east to west.  Nope!  It flows from the highlands in northwestern Arkansas before it joins the White River a ways downstream. 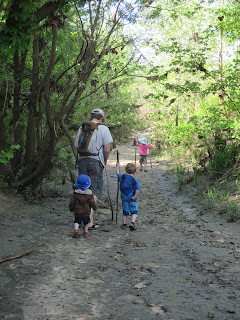 Back at camp I made some breakfast, then quickly convinced four other adventurers to join me down at the river.   We hiked and explored along the bank and discovered animal footprints and mussel shells.  At a few sand and gravel bars we skipped rocks in the river, had competitions to make the biggest splash, tried to catch little minnows with our hands, and had a great time.  We wandered back to our camp.  At the boat ramp, there was a metal post firmly imbedded in the bank.  It had red paint at the top, yellow paint in the middle, and green paint near the ground.  It was a simple, yet effective stream flow meter to show paddlers the river level and amount of risk relative to the stream flow. 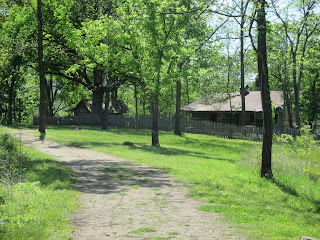 We drove over to the Tyler Bend Visitor Center to see what was there and to stamp the kids' passport books.  There was a small visitor center with rangers working on installing a new deck.  We drove up to the Collier Homestead for a short hike. 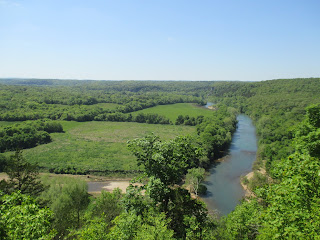 Less than a quarter mile past the homestead is a pretty good overlook over the Buffalo River.  We gazed off into the distance at the river, the forests, and the fields.  Wow it is beautiful here!  We took another trail back and quickly discovered that it was lined with poison ivy.  We carefully kept on going and made it back to the Collier Homestead without getting itchy. 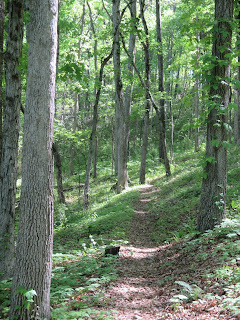 The forest trail sure was pretty, but the poison ivy did add some peril to it.  The stop at the Tyler Bend visitor center had left me wishing we had gone to Buffalo Point instead.  Buffalo Point would have been closer to where we camped, but it also has two other points of interest nearby- the Indian Rockhouse, a primitive cave dwelling, and an old mining town- the ghost town of Rush.  I'll have to come back to float the Buffalo River, and when I do I'll visit the other spots.  The small part I saw of the Buffalo River left me wanting more and beckons me to return.