An Evening Along the River in Little Rock

One of the rangers at Little Rock Central High School NHS recommended that we stop by the nature center down along the river in downtown Little Rock as  a potential stop the kids might like.  We discussed the advantages (tire the kids out, we're already here) and disadvantages (we could put a lot of miles in toward the Buffalo River) and decided that stopping would be a good thing.  We're on vacation and can make our own schedule, so there's no need to rush things. 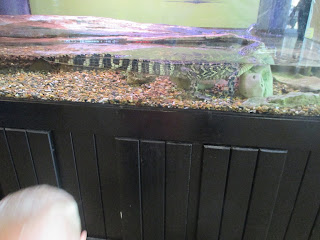 We followed Rock Street north to the river, paid $5 for parking, then walked along the Arkansas River Trail a short distance to the Witt Stephens Jr Central Arkansas Nature Center.  The Nature Center was a good stop.  We learned about a lot of different things in Arkansas, including that alligators are native to parts of the state. 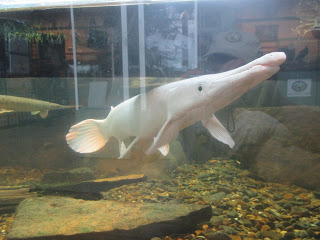 There were lots of displays, including some live fish and reptiles.  I thought this albino gar was really awesome.   We enjoyed the nature center for about 30 minutes or so until they had to close.  They're open almost every day of the year and close about 5 pm.  It's worth a visit if you're ever in downtown Little Rock. 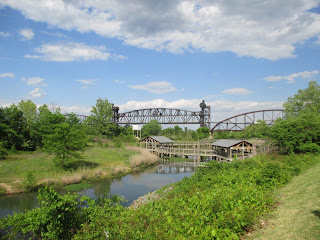 We decided to spend a little more time and strolled on the Arkansas River Trail to the Presidential Park Wetlands, a short distance east of the nature center.   The wetlands trail had a boardwalk over some wetlands along the Arkansas River.  We saw fish, turtles, a snake, and ducks.  The kids kept trying to out do each other on the animals they spotted. 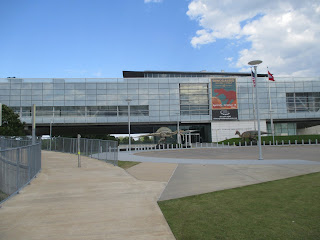 Just up the hill from the wetlands is the Clinton Presidential Library.  We walked up to it, but the large animatronic dinosaurs out front were a quite intimidating to the kids.  We were there a little too late in the evening to go inside. 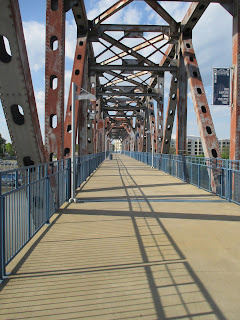 We concluded that since we'd walked a little ways down the river trail, it would be great to make the rest of the loop as a way to tire the kids out before we drove north.  We crossed the Clinton Presidential Park Bridge, turned west on the north bank of the river, then took the Junction Bridge back to our car.  It was a great little loop, but and we succeeded in wearing the kids out.  The loop has some fantastic views of the Arkansas River and the Little Rock skyline.  There were a number of people walking, jogging, or biking- clearly it's a popular urban trail. 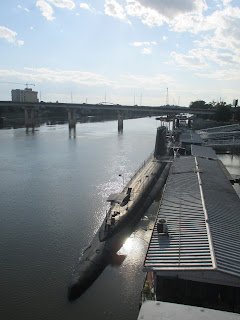 On the Junction Bridge, we were able to look down at a submarine, part of the Arkansas Inland Maritime Museum.  It was closed for the night, but was fun to look down on a submarine in a river.  It might be a fun stop too if we're ever back in Little Rock