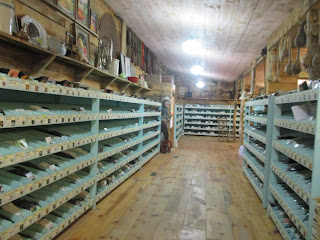 A while back we got a catalog in the mail from Baker Creek Seed Co.  The premise behind the seed company is that heirloom seeds can provide a variety and yield better quality produce than you can buy at the store, or obtain through most commercial seed catalogs.  Looking through the catalog, there were many different kinds of vegetables and fruits that we hadn't seen before.  Yellow watermelons, crazy varieties of melons and squash, chocolate brown tomatoes, and countless others caught our eye.  This place looks interesting!   We ordered a few seed packets to see what we could grow.
Fast forward a year or so and we had the opportunity to stop by the store.  It's the second most famous attraction in Mansfield, Missouri, trailing the Laura Ingalls Wilder home.  Mansfield definitely has grasped on to the Little House on the Prairie fame and numerous stores around town have names such as Laura's Pies or the Ingalls Hotel.  We drove past of them to the north side of town where Jere Gettle is building an Ozark ghost town at Baker Creek.  The town was buzzing with people as they were preparing for the Spring Planting Festival. 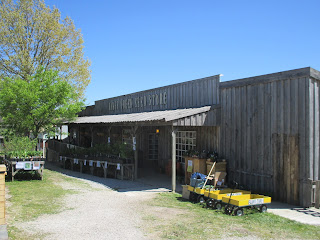 We found a parking spot and stepped into the store.  Calming blue shelves were lined with seed packets.  There were a few other planting tools and some knick-knacks, but the store was about seeds. We wandered the aisles, looking at this variety and that variety.  I kept my eyes out for some peanut seeds.  I found two varieties and chose one.  We found a few other packets of seeds we were interested in and paid at the register.
After we bought our seeds, we stepped outside and walked around the town.  There were a dozen or so buildings with a restaurant and bakery as the two main ones, but there was also a blacksmith shop, jail, and several other buildings.  There were also lots of animal pens for chickens, turkeys, peacocks, and others.  We even spotted a possum trying to keep out of the way!

If you're in Mansfield, it's worth the short drive out to Baker Creek.  The Gettles are Seventh Day Adventist, and as such are closed on Saturday.