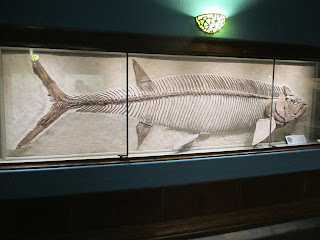 While we were in Lawrence, we visited the University of Kansas Natural History Museum.  It's a great museum!  There's lots there to see, but of course I thought the hall with the fossils was the best. 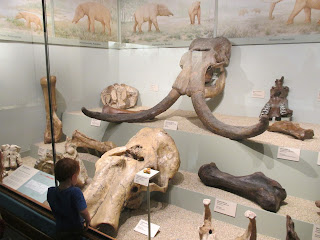 The kids liked all of the fossils too.  We saw lots of fossil fish, bones from prehistoric mammals, and numerous other fossils. 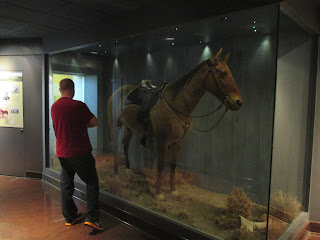 One of the prized exhibits at the museum is Comanche, the only survivor of the Battle of the Little Bighorn.  In the battle, George Custer and his command were wiped out by the Sioux Indians in Montana.  The Indians took the horses or other animals that were still useful, leaving Comanche, who was greatly injured.  Comanche was brought to Ft. Riley, where he peacefully lived out the remainder of his days.  When he died several years later, they skinned him, then mounted his skin to preserve him for the future.  He's now standing in an exhibit just to the right of the main entrance to the museum. 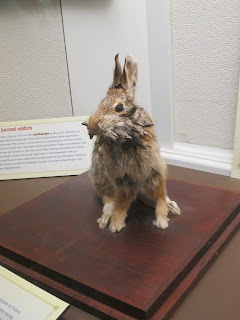 There were lots of other interesting things on display.  This "horned rabbit" was rather interesting.  It doesn't actually have horns, but instead had parasites that infected it, which caused it to grow the masses and tumors.

We really enjoyed the museum.  We spent most of the afternoon browsing its halls.  There's a small fee/donation asked to visit the museum, but we spent about the same for parking.  Parking is limited, and in fact restricted on the University of Kansas Campus to those with parking passes.  We parked in the parking structure a block or two north of the museum and walked over to it.