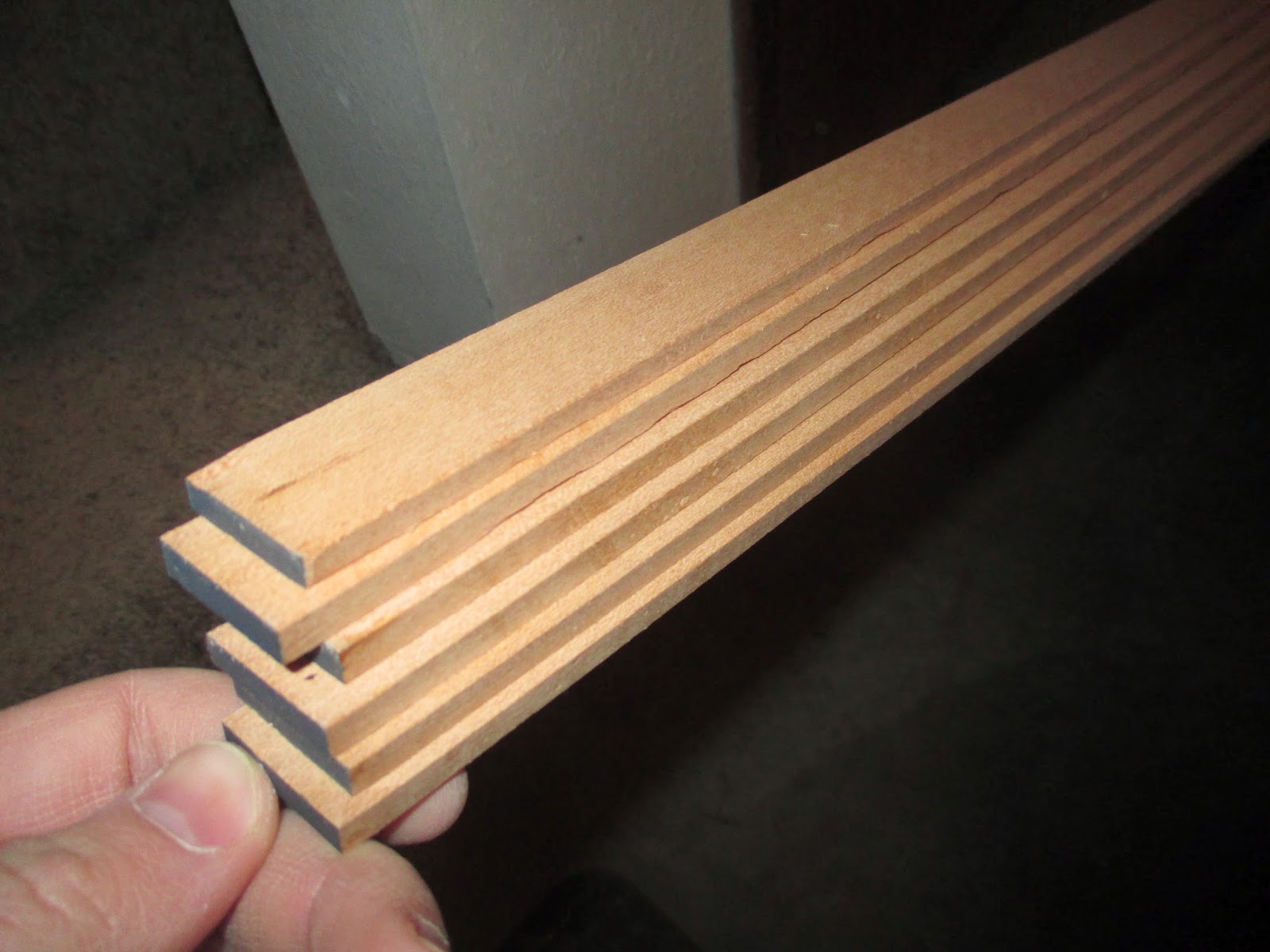 I've decided to do what I can to accelerate my canoe building.  The canoe was on the "3 year plan", but my circumstances have changed slightly, and with the added time that comes from not having a house to maintain, I have time to do other things that I've wanted to do.  Working on the canoe is near the top of the list.  The biggest hangup I've had since I built the molds and the strongback is not having the stems made.  I had been going back and forth between ash and cherry for the stems, but ultimately decided on using cherry as the wood of choice.  The choice ended up being quite simple: cherry was readily available, while ash was not.  I found my cherry wood at Bloomer Hardwoods, near Weston, Missouri.  They were super helpful, and even ripped the strips for me for a few dollars.  I could have done it myself, but I figured that their equipment was set up and able to make accurate cuts, so it was in my best interest to use it. 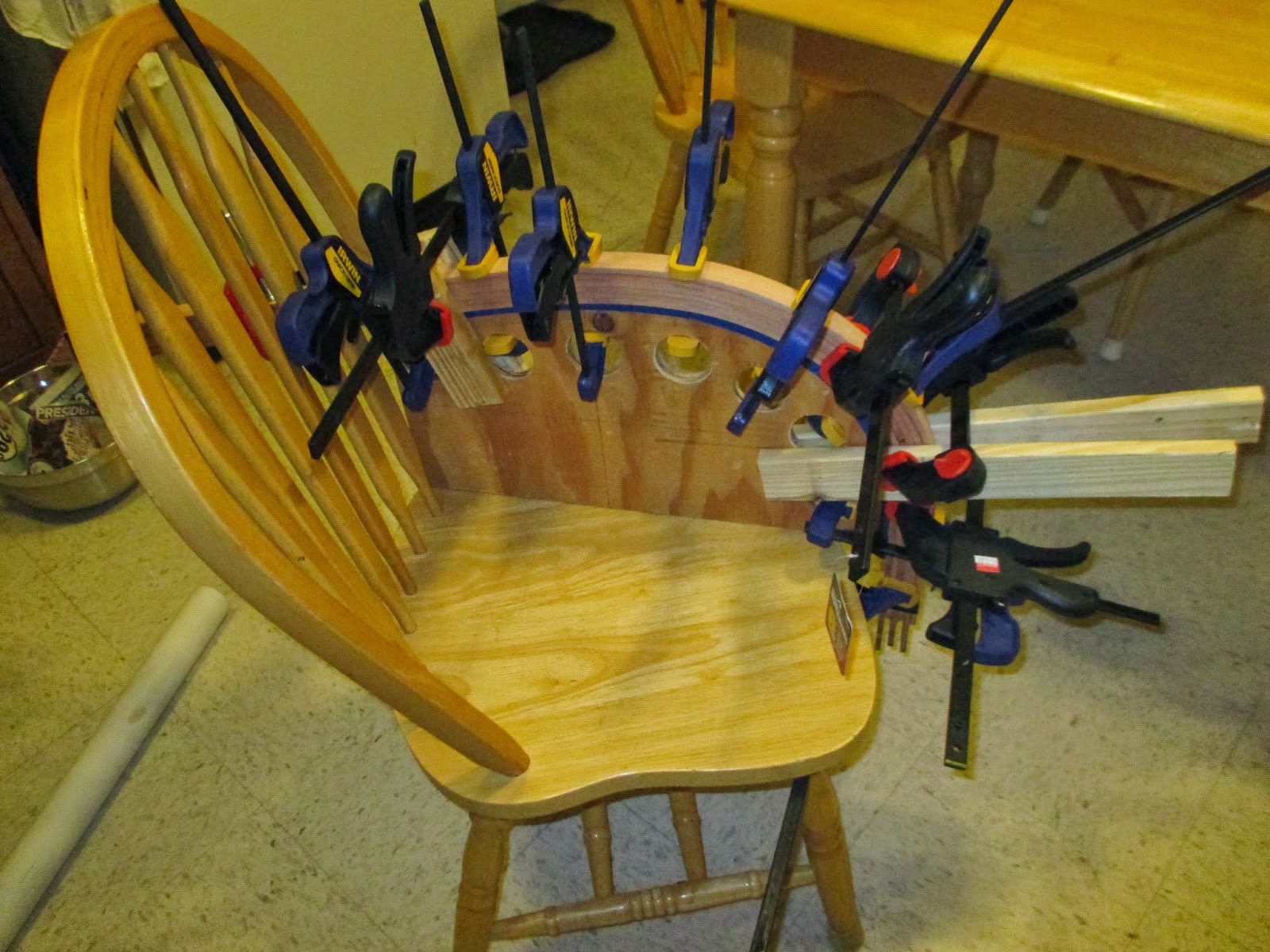 I stacked 6 strips of 1/4 inch cherry pieces for each stem, then followed the procedure suggested in Canoecraft.  I wrapped each end with electrical tape.  The electrical tape helped hold the pieces together while I steamed them, so when I pulled the stems out, it was super easy to clamp them on the stem mold and quickly clamp them into shape.  Each stack of 6 strips makes both an inner and an outer stem.  So each stem piece is 3 pieces of wood, and about 3/4 of an inch thick.  The inner stem's purpose is to provide a secure place for the cedar strips to attach to.  The outer stem neatly fits over the top and adds a great finished look to the canoe.

A few thoughts about stems. For some reason, I had it in my mind that bending and laminating/gluing the pieces together was one step.  Wrong!  There are two distinct stages to it.  Stage one is steaming and bending the strips and clamping them to the mold/form to allow the strips to dry into shape.  Stage two is gluing/epoxying them together so that they actually form the stem.
Since there are two stems for each canoe, I actually had to repeat the steaming/bending/clamping steps another time since I don't have enough clamps to do both at once.  This isn't a bad thing.  When you're steaming the stems, it's going to be easiest for you if you steam them one set at a time.  2" conduit only holds one set of stems at a time, and the pipe I had actually started to bend due to the heat of the steam. 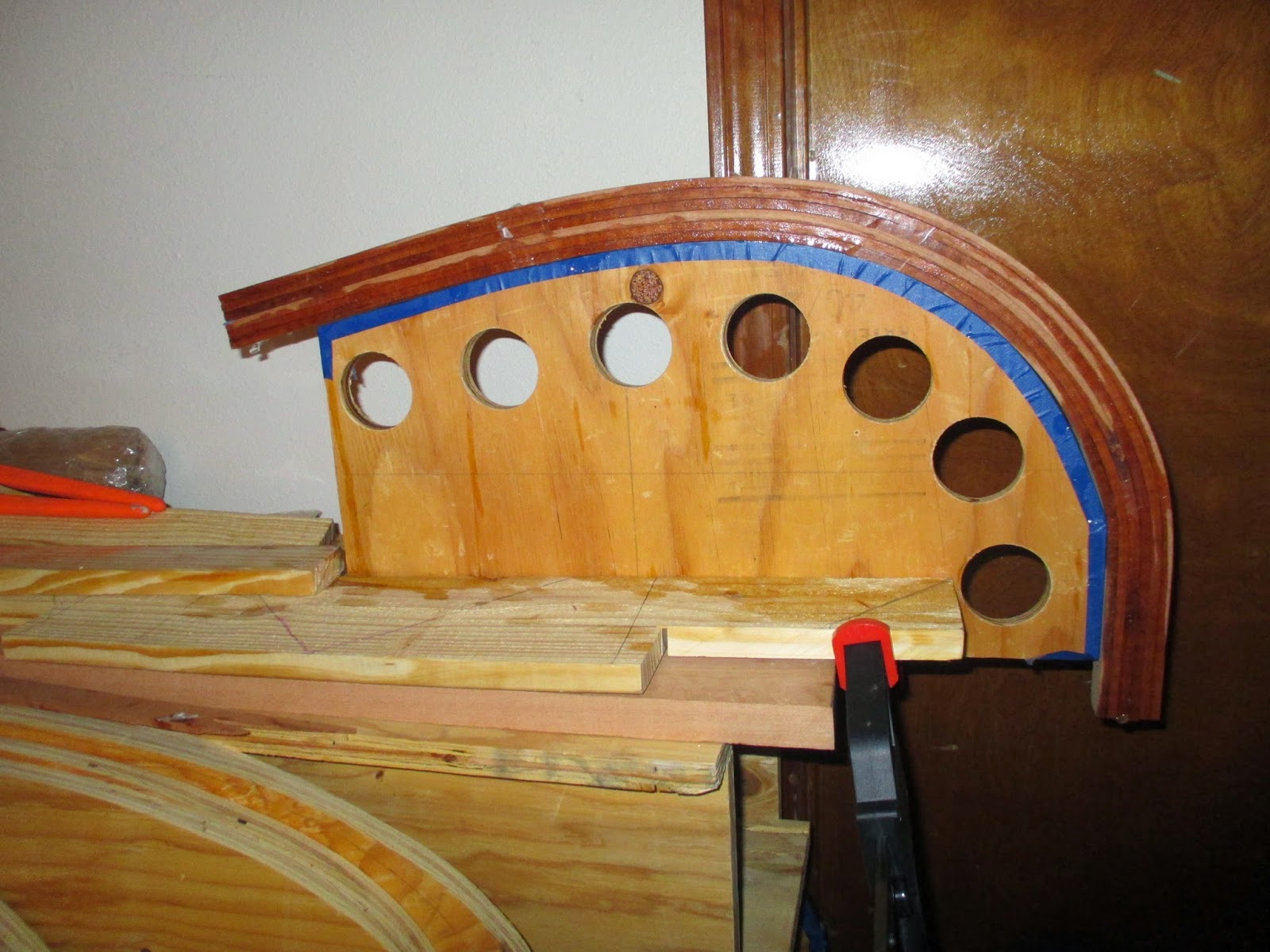 I bent the strips, then let them dry for a week or so before I had another free evening to bend the next stem.  Another week or so later, I was ready to laminate the stems.  I bought about 3 gallons worth of epoxy/hardener from Raka Inc. Two gallons were epoxy, one gallon was hardener.  This should be enough for my canoe.  I debated about using epoxy for the stems vs a wood glue such as Titebond 3.  Ultimately, I decided to use the epoxy since it is completely waterproof and would be more solid than the Titebond.  Not much epoxy is needed.  The Raka epoxy is a 2:1 ratio of epoxy to hardener, so I mixed up 50 mL of epoxy with 25 mL of hardener, stirred quickly and thoroughly for a few minutes, then started to liberally apply it to the strips of wood. One strip, slather on the epoxy, put on another strip, "butter it up" with more epoxy, then add the 3rd strip to complete the inner stem.  I put packing tape on top of the 3rd strip before I started so that I'd know not to add epoxy to it.  I put on another strip, epoxy, strip, epoxy, strip.  Then I clamped them together firmly, but not too hard.  Too much pressure squeezes all of the epoxy out and leaves the stem weak.  I also added a few clamps sideways to make sure the strips were aligned with each other.  That's another thing- when you clamp the strips that have been steamed, they don't require tight alignment, but when you epoxy them together, you want them to be as precise and square as you can reasonably get them. 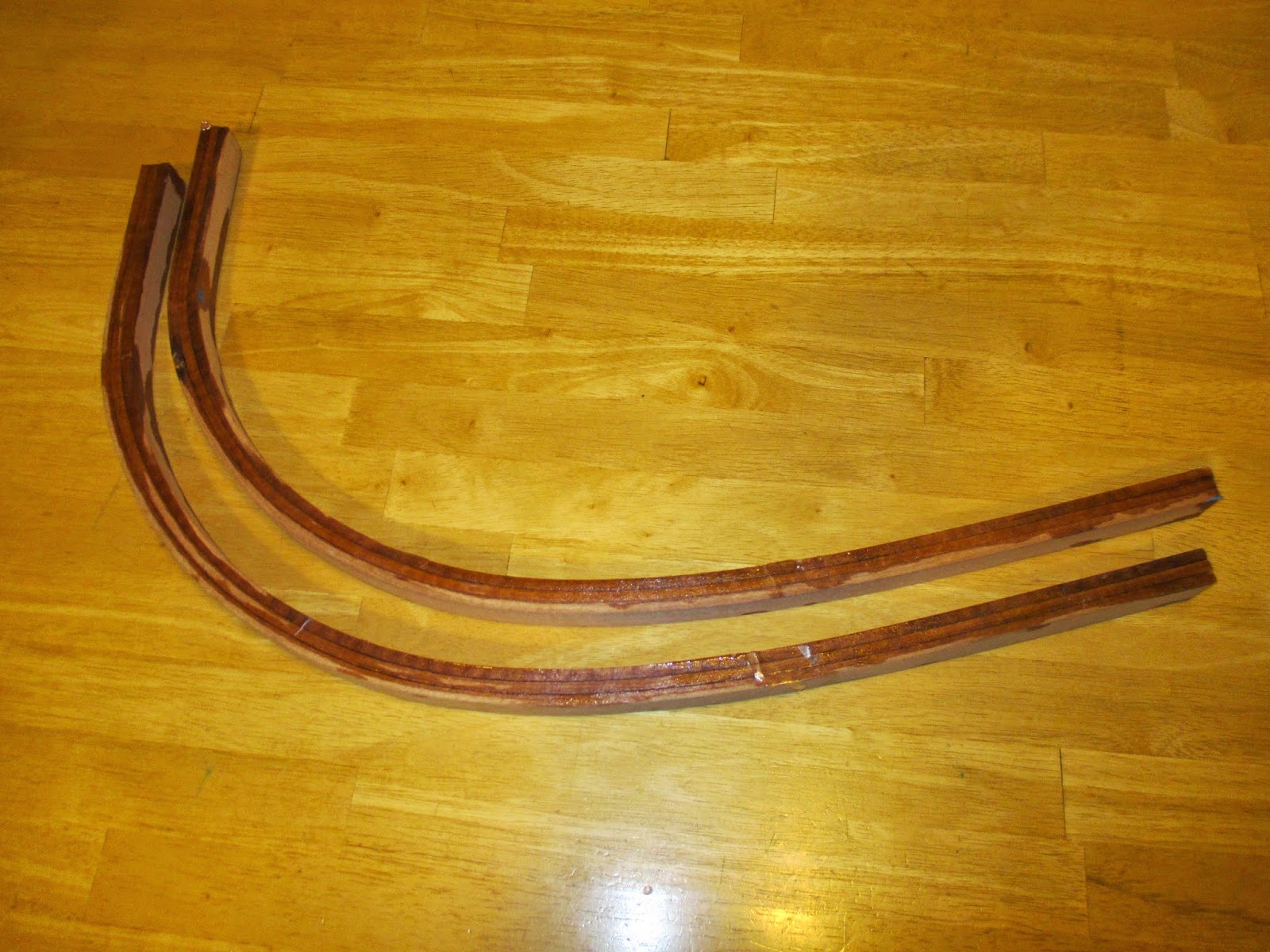 I wiped down the outside of the stems where all the epoxy had squeezed out, then let them harden for a few days.  When I took the clamps off, I pulled the inner and outer stems apart and was instantaneously one step closer to my canoe!  Notice how the "inner stem" and the "outer stem" pieces nest together so well.  This is good- you want them to fit tightly together.  I did a little bit of shaping on the inside surface of the inner stem, since it will be visible on the inside of my canoe, but the stems shown above are essentially good to go.  There will be further shaping needed, but it's best to wait until it's fastened to the forms and the strips can guide the amount of wood to remove.  Once again, a tight fit is best.

One more note- I used blue "painters tape" to line my form/mold when I laminated and glued my stems.  It wasn't a bad mistake, but using clear "packing tape" would be much better.  The epoxy slightly penetrates the painters tape and makes it difficult to remove, but packing tape is impervious to the epoxy.  I'll be using packing tape to line my forms when I actually begin stripping and building the canoe.
Posted by Ben at 8:39 PM