Hiking Over and Through Tonto Natural Bridge 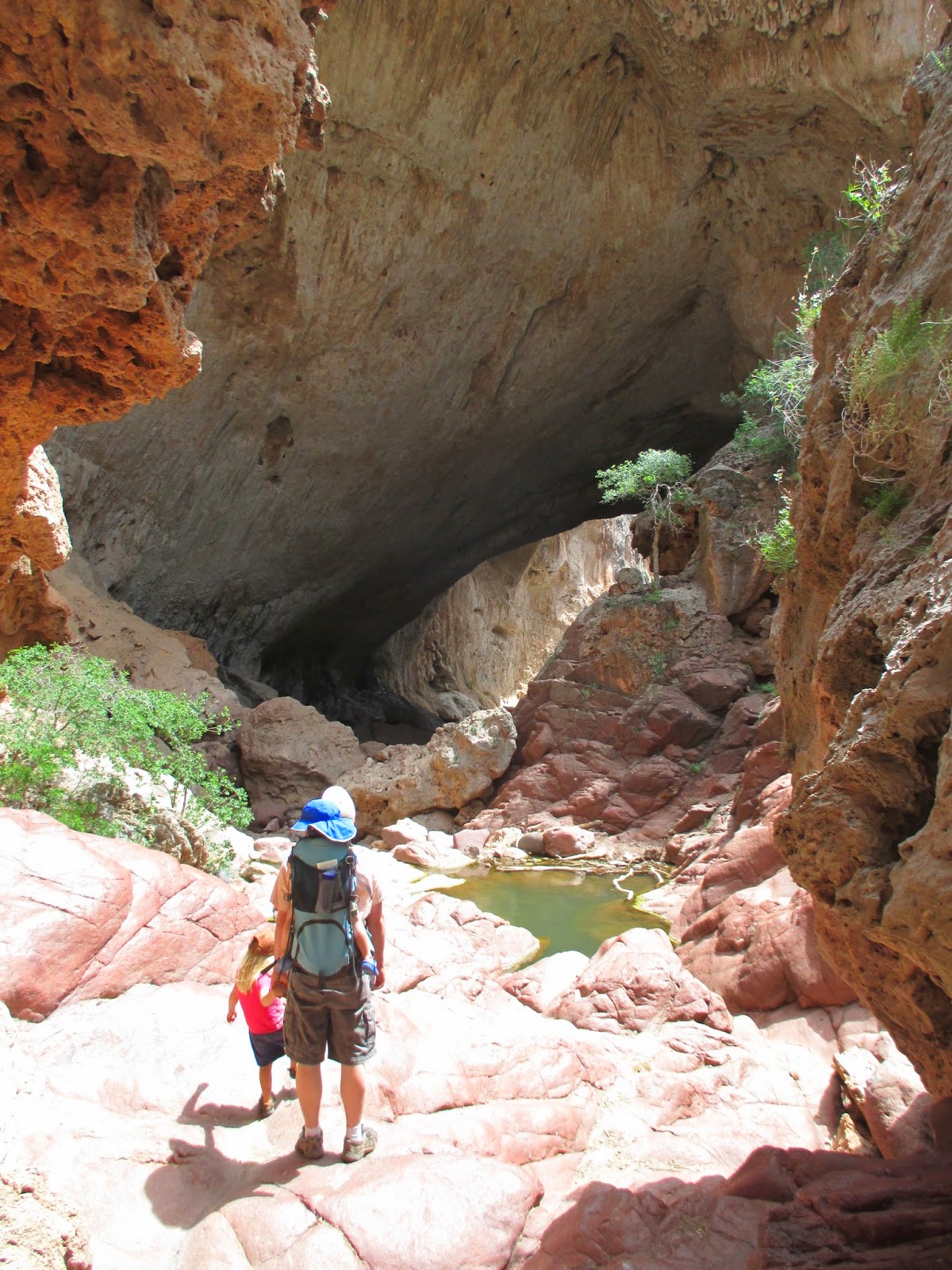 Tonto Natural Bridge is a pretty amazing place.  It was discovered by David Gowan, a prospector, who tangled with some Indians in a bad way and needed a hideout.  As he was running, he stumbled into the canyon with the natural bridge, then hid out in the caves near the base of the bridge for a few days until the Indians left.  Artifacts found in the area pretty clearly show that the Indians knew about the bridge prior to that, but it was probably a different group that chased poor Mr Gowan.  At least, that's how it makes sense in my head.  Otherwise they would have probably captured him, leaving it up to the next person who happened upon the bridge to gain the notoriety of being the person to bring it to the attention of others.  Mr Gowan was not captured, and later talked his nephew into coming back with him to the area where they ended up opening a resort of sorts.  Fast forward a few decades or so and now the area is Tonto Natural Bridge State Park. 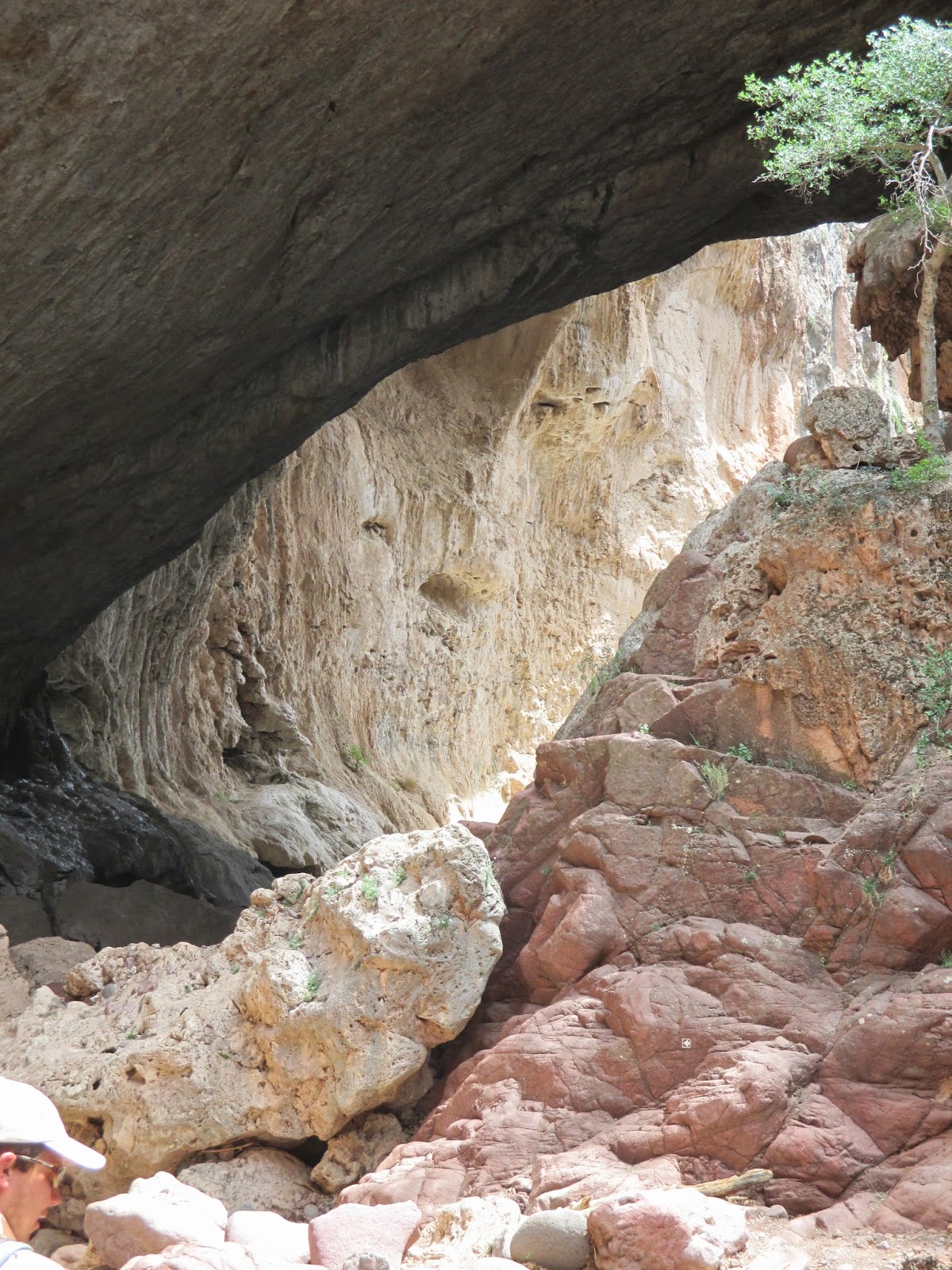 The bridge is massive. Gigantic.  Huge.  Awe inspiring. Difficult to capture with a camera. Possibly the largest travertine bridge in the world.   Located down a very steep grade from the highway.  All of the above.  We stopped at the nearby lodge that was converted into the park headquarters to pay our entry fee.  Among the artifacts that had been found in the area, a buck skull caked with travertine caught my eye.  We continued to the parking lot, then got out to try and see where this bridge was.  As we wandered and looked, we turned the corner to a viewpoint and discovered that we had been walking over the top of it and hadn't been aware of it. 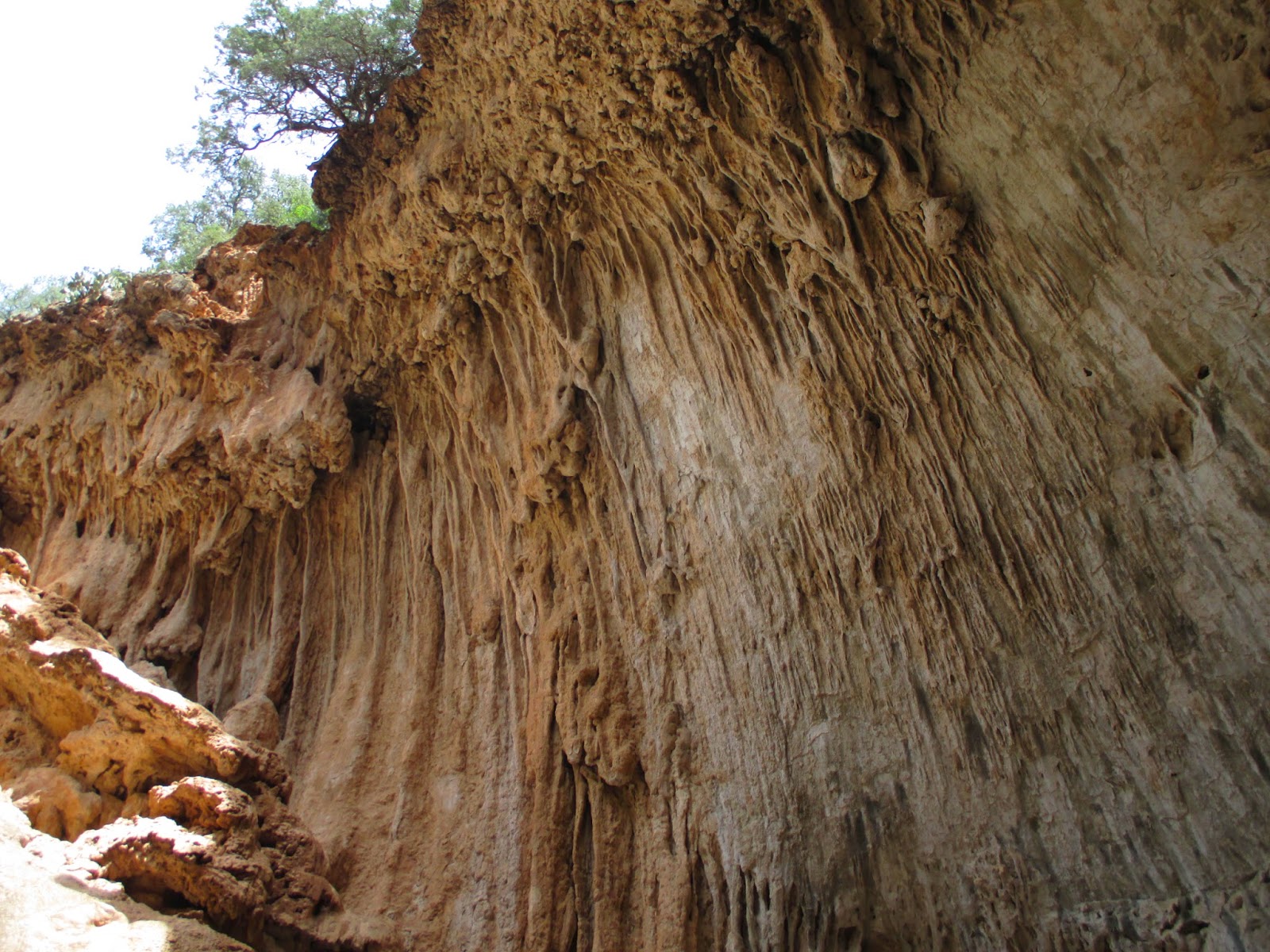 We picked our way down the trail on the up-stream side of the bridge.  We stopped every now and then to admire the bridge, as well as the travertine deposits along the walls.  To me they very much looked like cave formations, formed because of the high mineral content of the water and a flow rate high enough to counter the drying out that comes from evaporation.  At the bottom of the trail, we turned west and hopped down stream to try and get a better look at the bridge.  The viewpoint from here is better than it is on the other side. 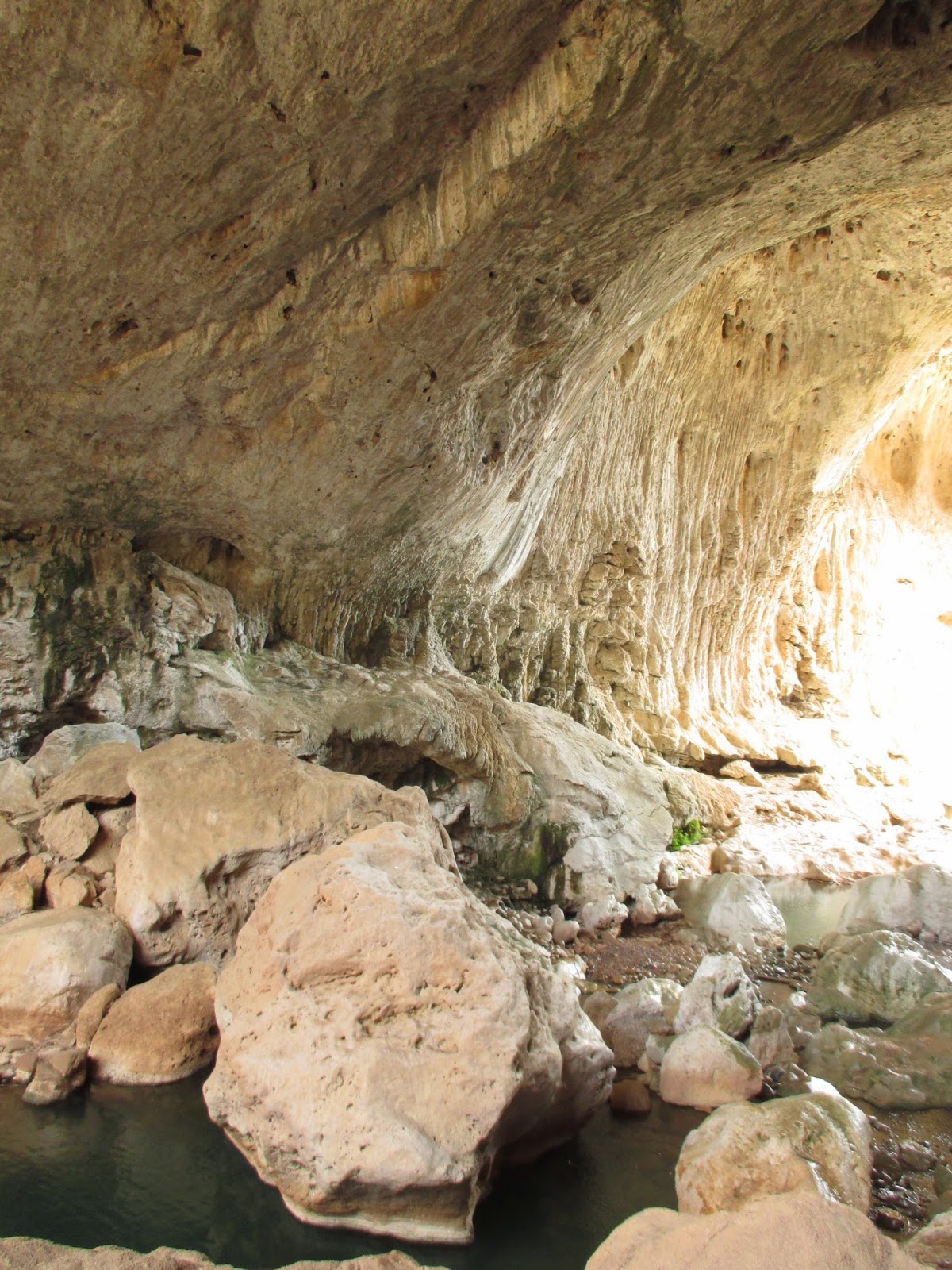 As we were picking our way over the rocks and boulders, we found a sign with an arrow pointing the way, then another one, and pretty soon we found ourselves underneath the bridge.  Every time we lost the wayfinding signs, we'd look a little harder and find another one soon enough.  Pretty soon, we'd climbed all the way through the bridge and were on the other side.  The signs on the downstream sign warn hikers to not climb in the upper caves, or swim in the pools underneath the bridge. 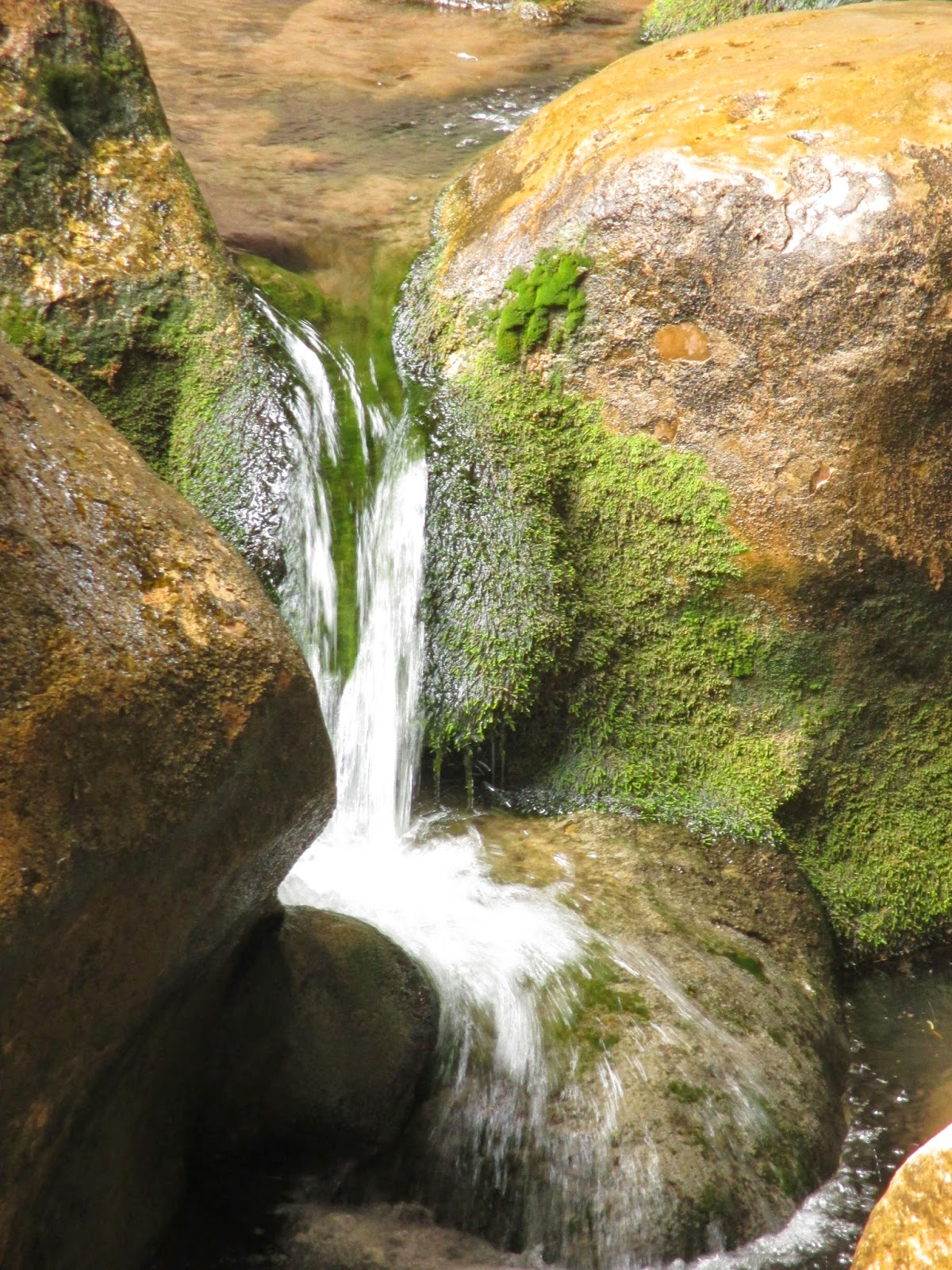 There's a  cascade of water that pours down the top of the bridge, making the downstream side richly decorated with green mosses and other water loving plants.  We looked and had a great time gazing up at the expansive bridge.  The hike up took a lot longer than our hike down to the bridge.  We passed a few hikers that had dogs with them and had blatantly disregarded the signs saying to not take dogs on the trail. 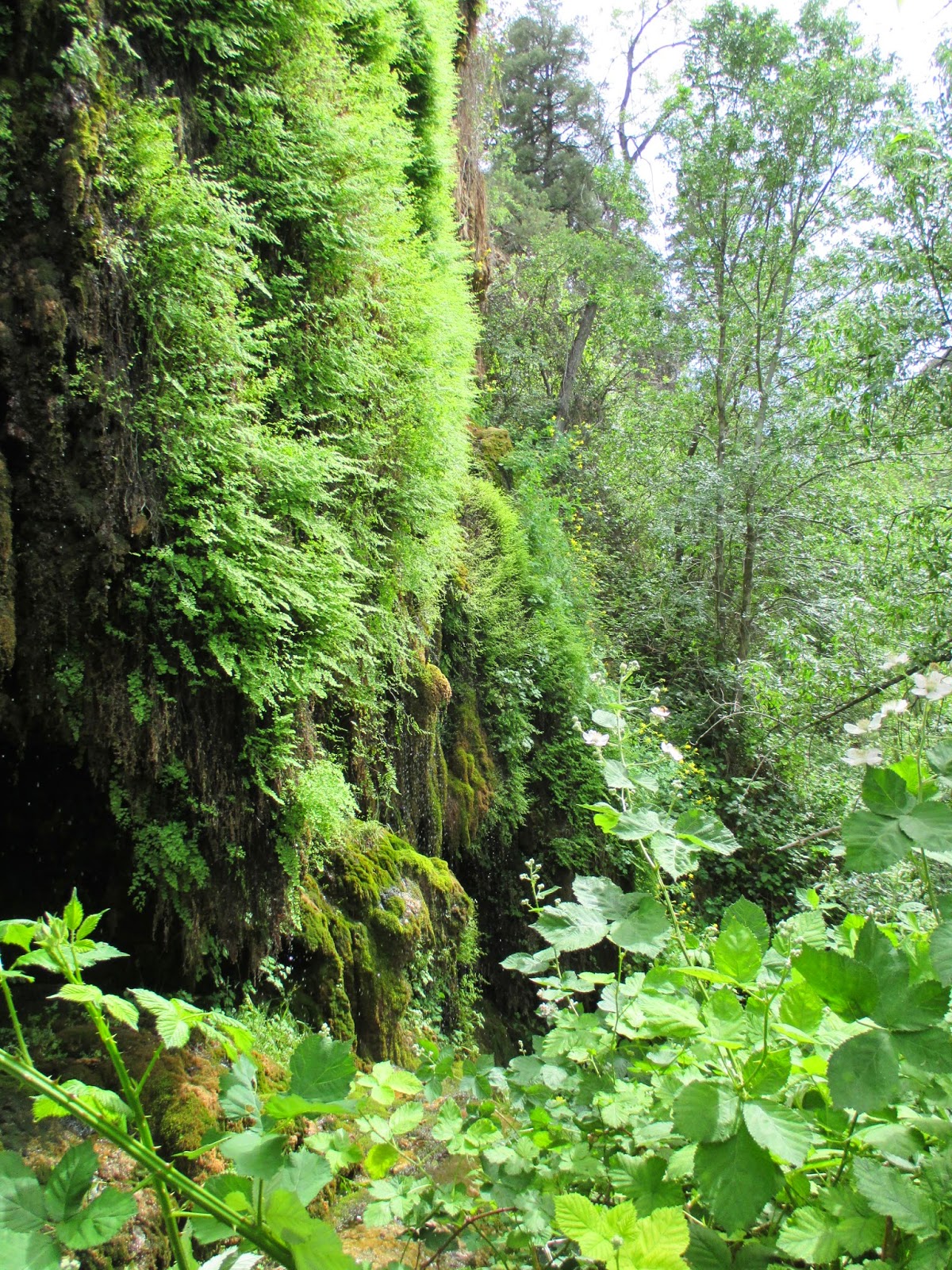 We then did the short "Waterfall Hike".  The Waterfall Hike doesn't really have a waterfall on it.  Instead it's a lush green travertine cliff that's seeping full of water and covered in ferns, mosses, columbines, and other plants.  It's neat, but definitely steep stairways to climb.  There were a lot of wild blackberry plants that made me think that late summer might be a good time to visit here.  We definitely had a good time at Tonto Natural Bridge.