In the Dark at Carlsbad Caverns National Park

Our Spring Break trip to Carlsbad was pretty awesome.  I can't say it was epic, because nobody died.  But it was a great experience.  After hiking Guadalupe Peak overnight, I was a little bit sore when I awoke, but I still figured I was good enough to go through the caves at Carlsbad.  We drove up from the Pine Springs Campground at Guadalupe National Park, the reasonably closest campground to Carlsbad Caverns, and found the place not that crowded, at least judging from the limited number of cars in the vast parking lot.  I'd heard that Spring Break is a zoo at Carlsbad Caverns, so in searching out a time for the trip, deliberately scheduled it for mid/late April, a week or two after all of the Texas Public Schools have their Spring Breaks.
We picked up our tickets at the ticket counter ($10/adult, or free with a National Parks Pass), then wandered over to the natural entrance.  There are about half a dozen tours at Carlsbad Caverns, but the two most common ways to the cave are through the Natural Entrance or through the elevator.  We took the both ways- more on that later.  After getting a pep-talk from a ranger, along with encouragement to not touch things or spit, or throw things into the pools (and keep your hands inside the ride at all times), we paused at the entrance to look for some pictographs made by Indians before non-Indians discovered the cave.  I found them on the right side of the entrance.  We then proceeded to walk down the switchbacks into the cave.  The steep switchbacks reminded me of Walters Wiggles at Zion National Park.
The cave is pretty impressive.   The one of the first named features we came to was the Whale's Mouth.  The drapery was pretty impressive.  I had to wonder about what the early explorers saw as they descended into the depths of the cavern.  They had to deal with only the lights on their helmets or torches and must have had a much different experience than the average tourist does today. 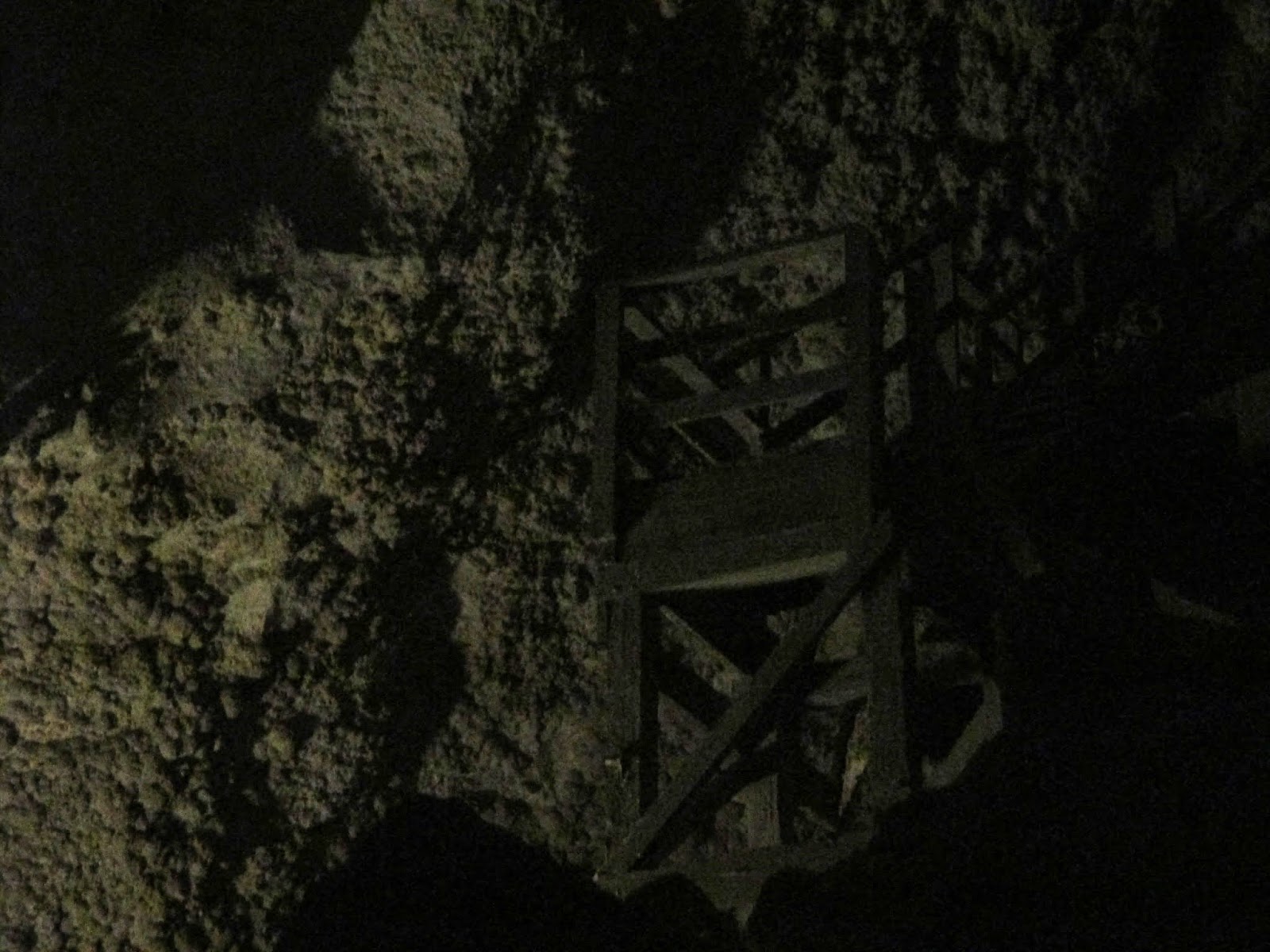 We passed a lot more formations, many of which were just difficult to photograph.  We also saw some wooden stairs that were used for tours before the modern path was installed.  It's a steep, steep path.  No strollers or wheelchairs are allowed down the natural entrance.  I felt like I needed a wheelchair almost.  I gingerly continued onward- my knees complaining for most of the way.  We passed a few intrepid individuals climbing out the natural entrance. 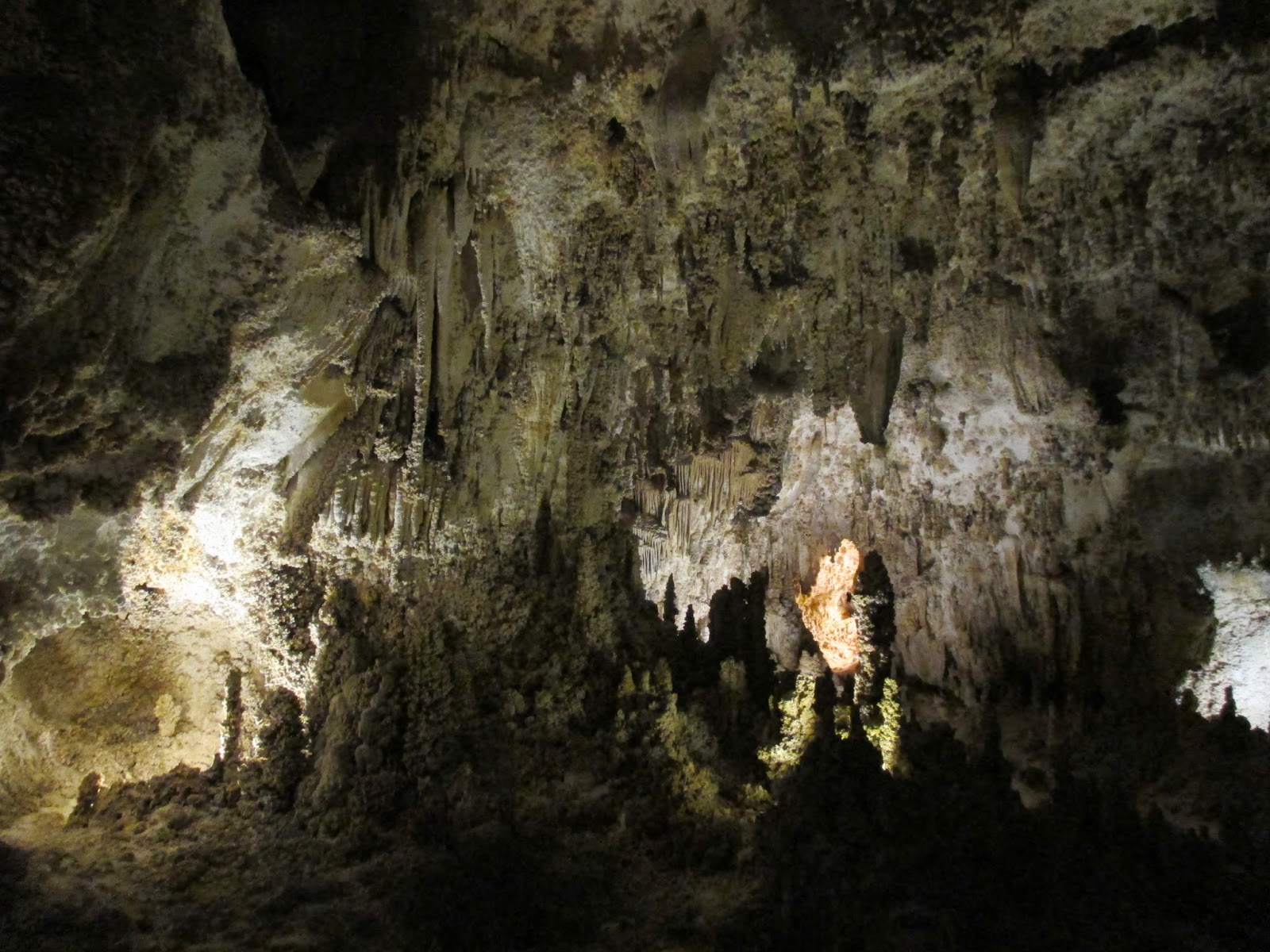 Overall it's a 750 foot descent to the bottom.  The cave is deeper than that, but they don't do tours there.   The elevator ride takes over a minute, and is guaranteed to make your ears pop from the pressure differential.  We finally made it to the end of the descent.  The kids were tired and needed a break, so we took the elevator up to the top for a snack and some daylight. 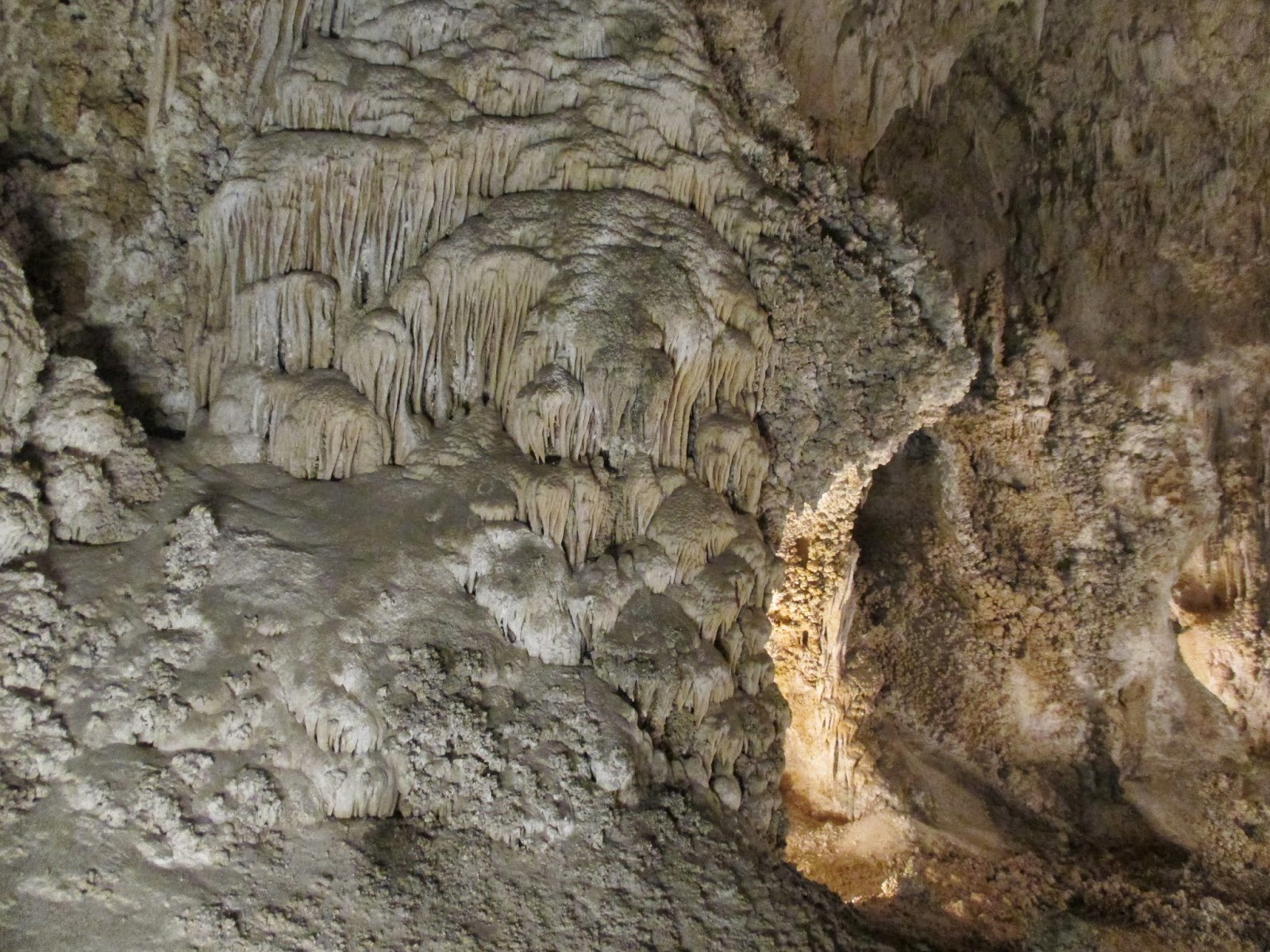 After lunch, we went back inside and showed our tickets to the ranger operating the elevator and she let us back in via an elevator ride back down to the bottom.  Keep your ticket!  Don't throw it away if you want to take the elevator up and down!  If you've got young kids, definitely keep your tickets! 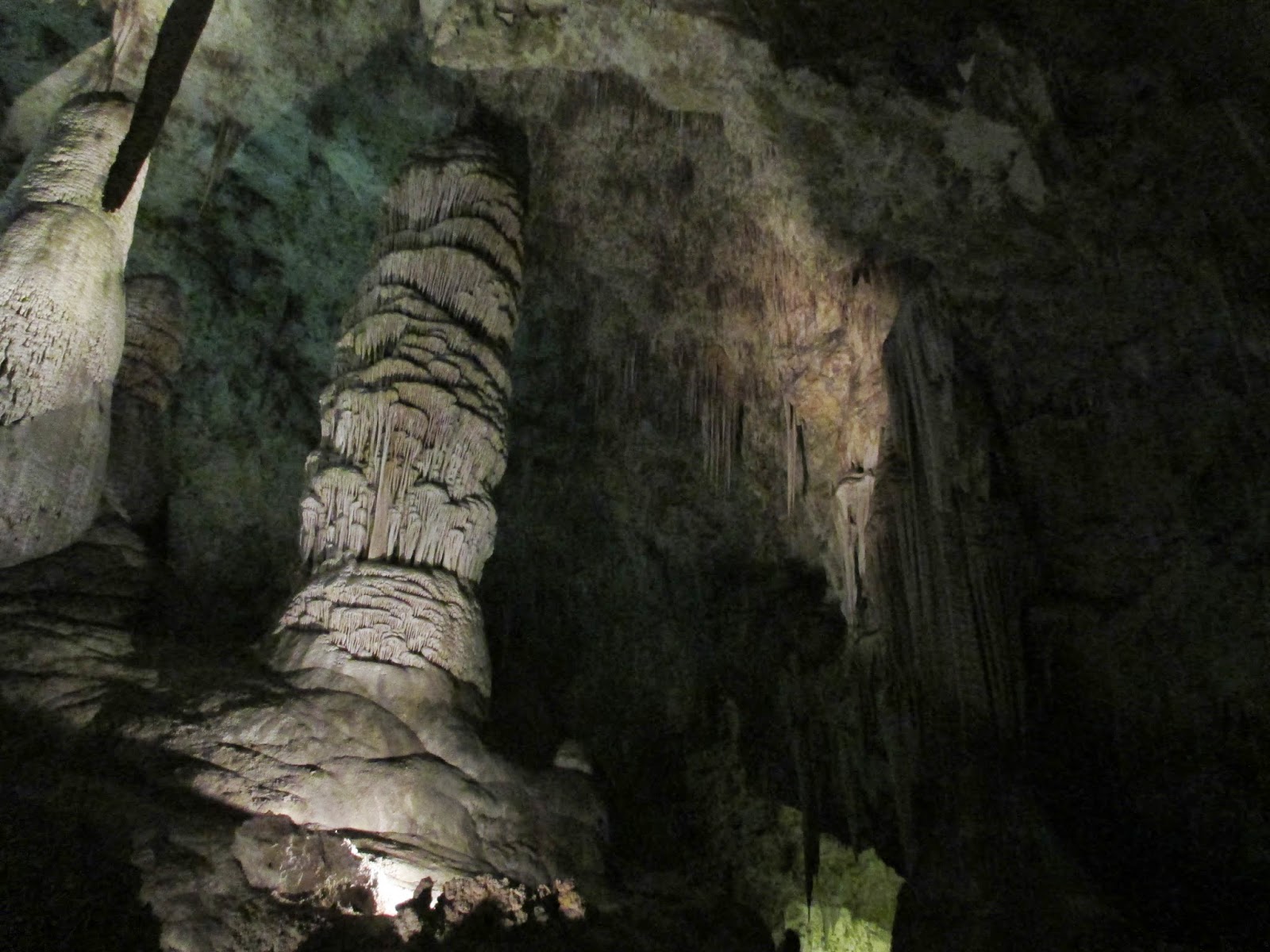 Back down at the bottom, we left the elevator lobby, snack bar, and restrooms for a walk through the highly decorated cave. 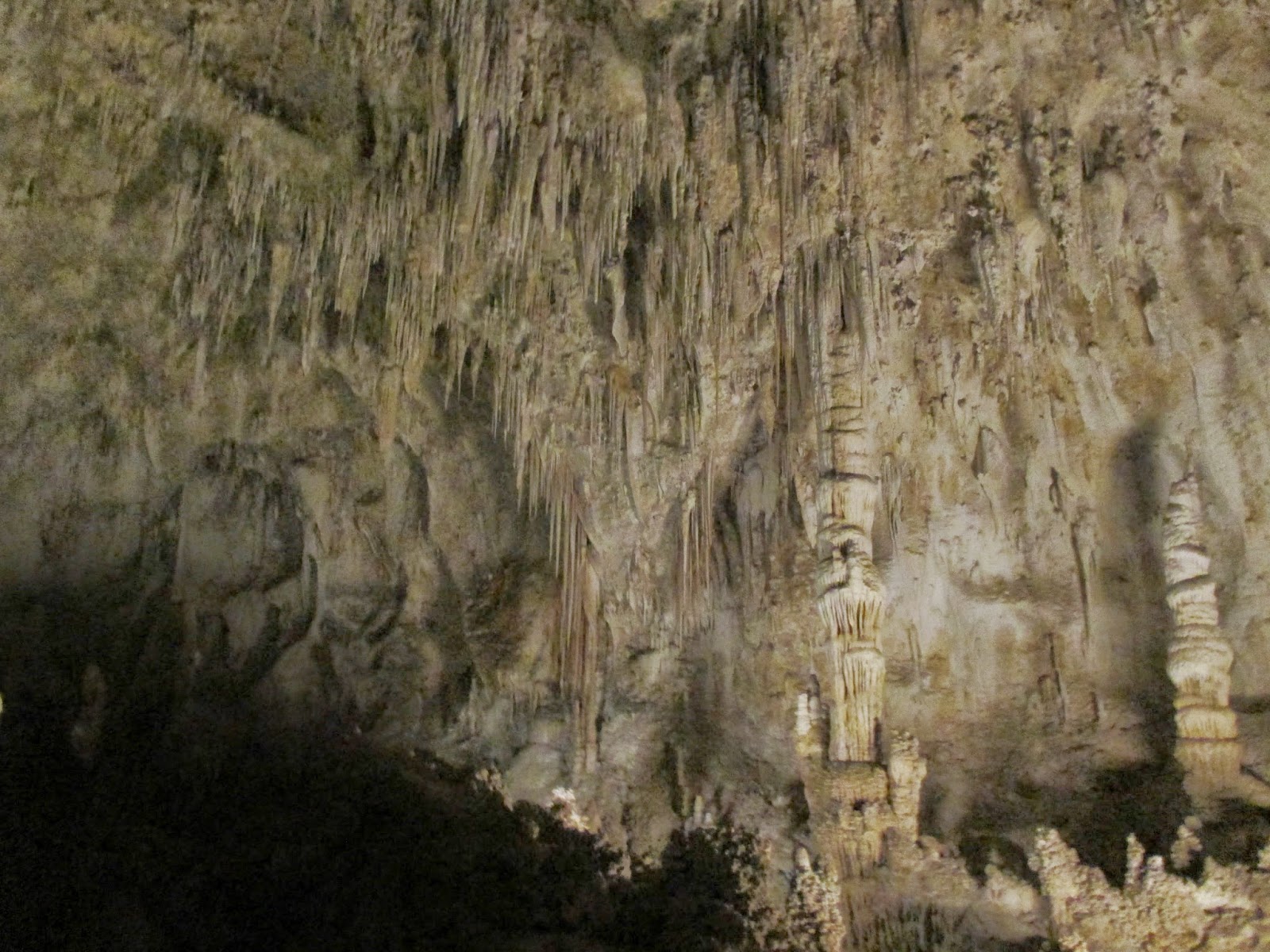 The cave is amazing!  There are decorations everywhere!  Most of them are dry/dormant/dead.  But the cave scientists are hopeful, so dead ones are not completely dead and are just dormant. 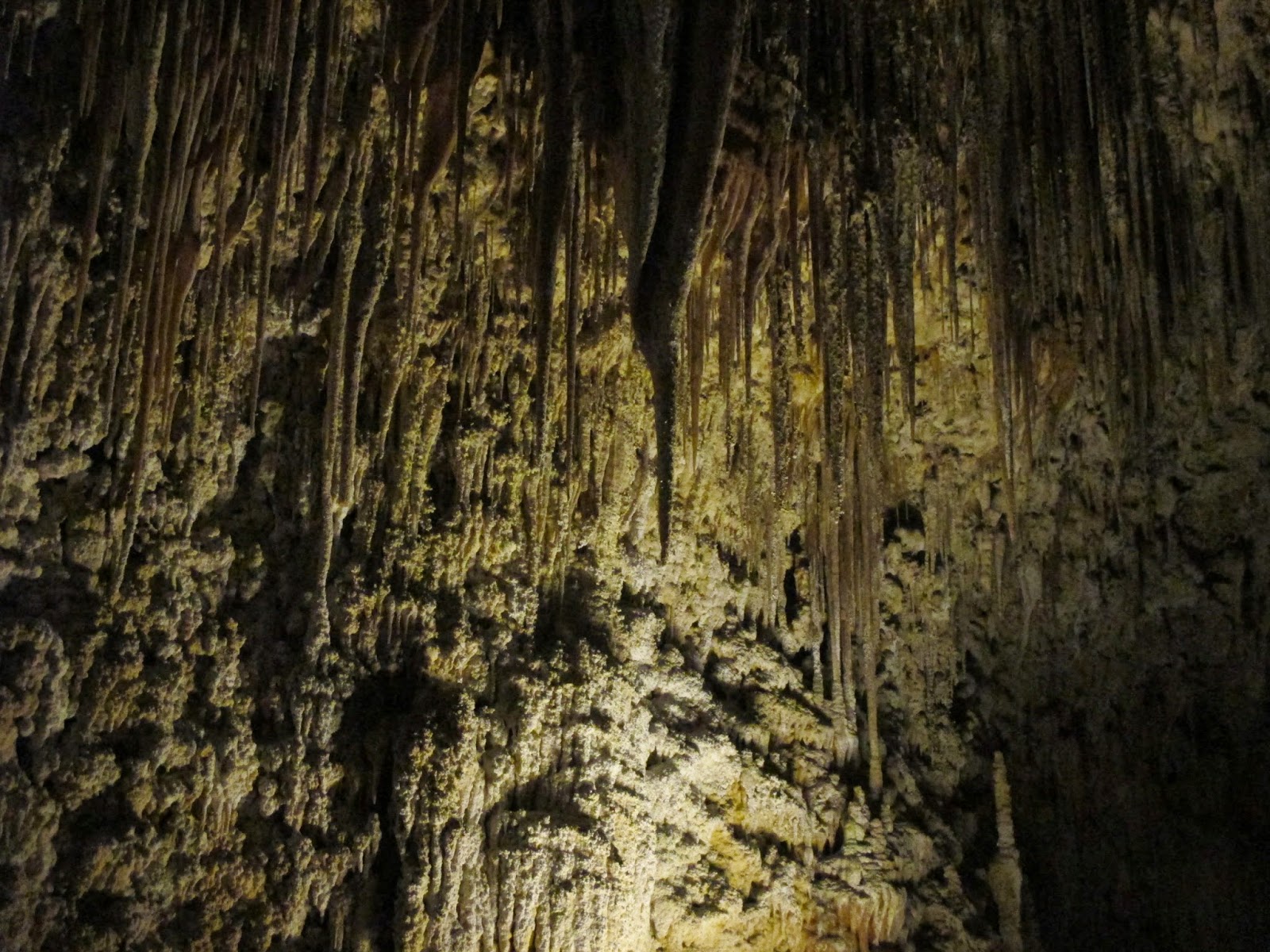 I tried taking good pictures, and got a few that are decent, but they are all completely inadequate for conveying how awesome the cave is.  One of the rangers said that the least crowded time at Carlsbad Caverns National Park is between New Years and mid-February.  I think it would be a bit easier to take some stellar shots when there aren't as many people around. 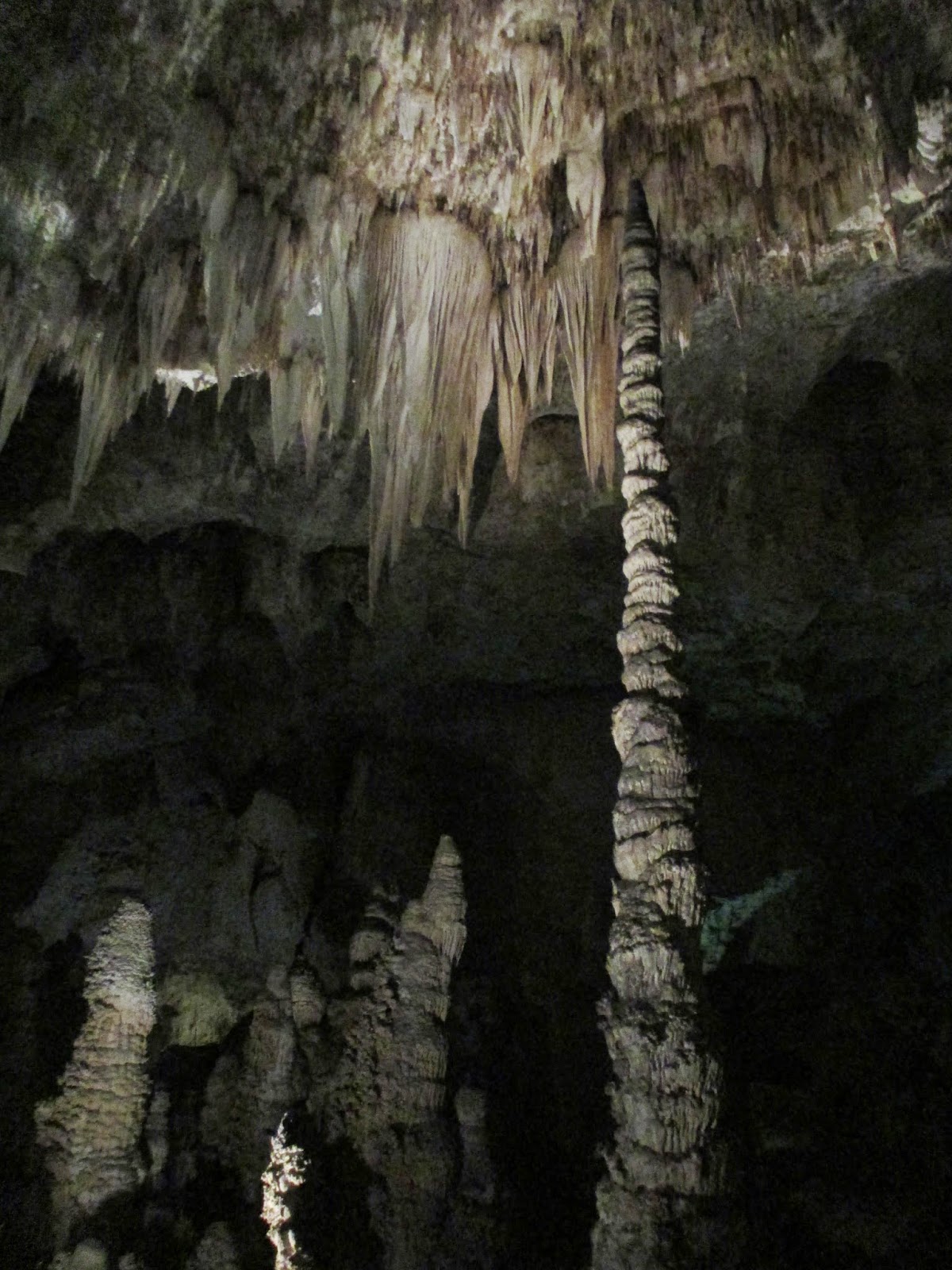 One of the most photographed features in the cave is the Totem Pole. 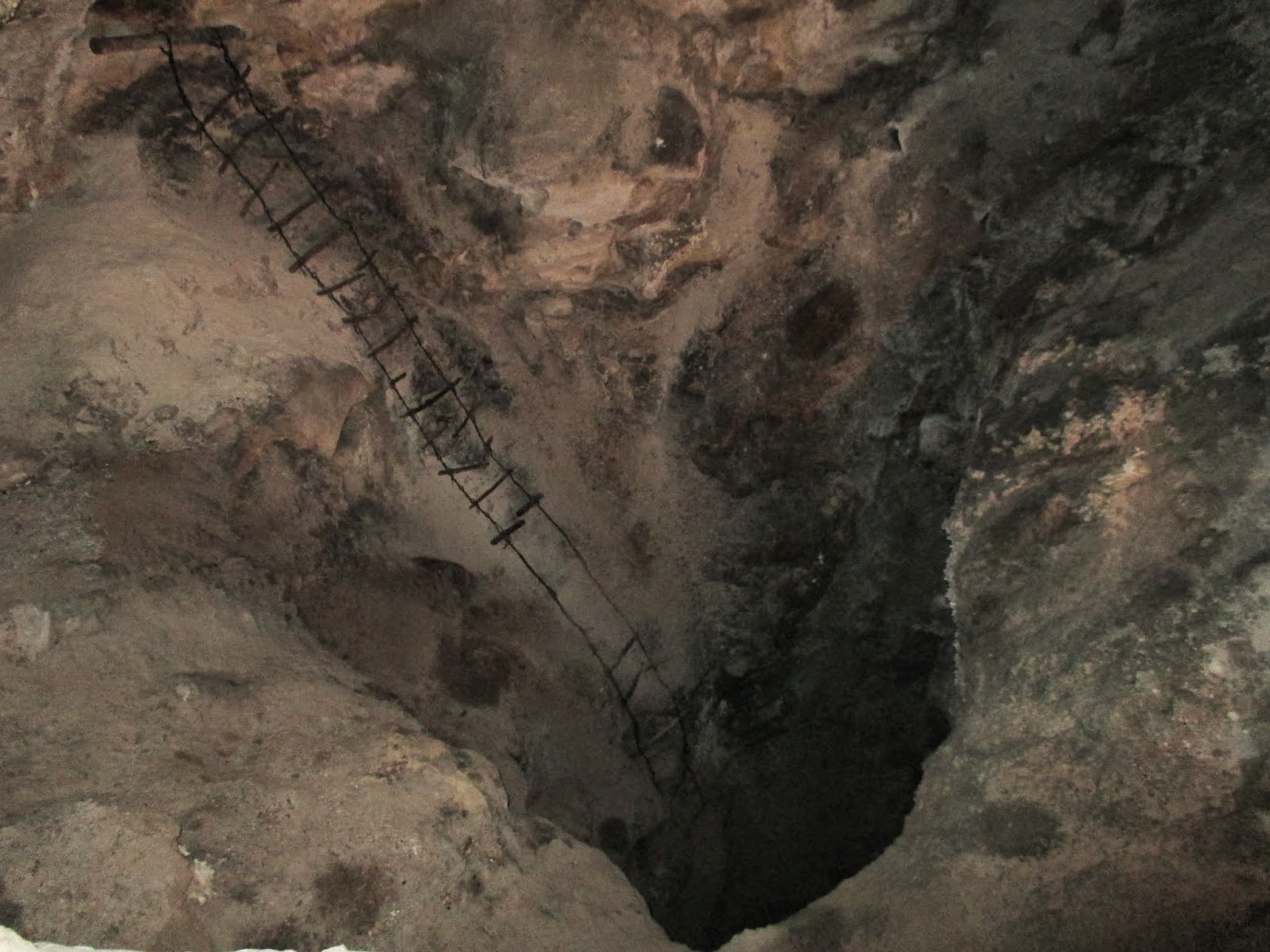 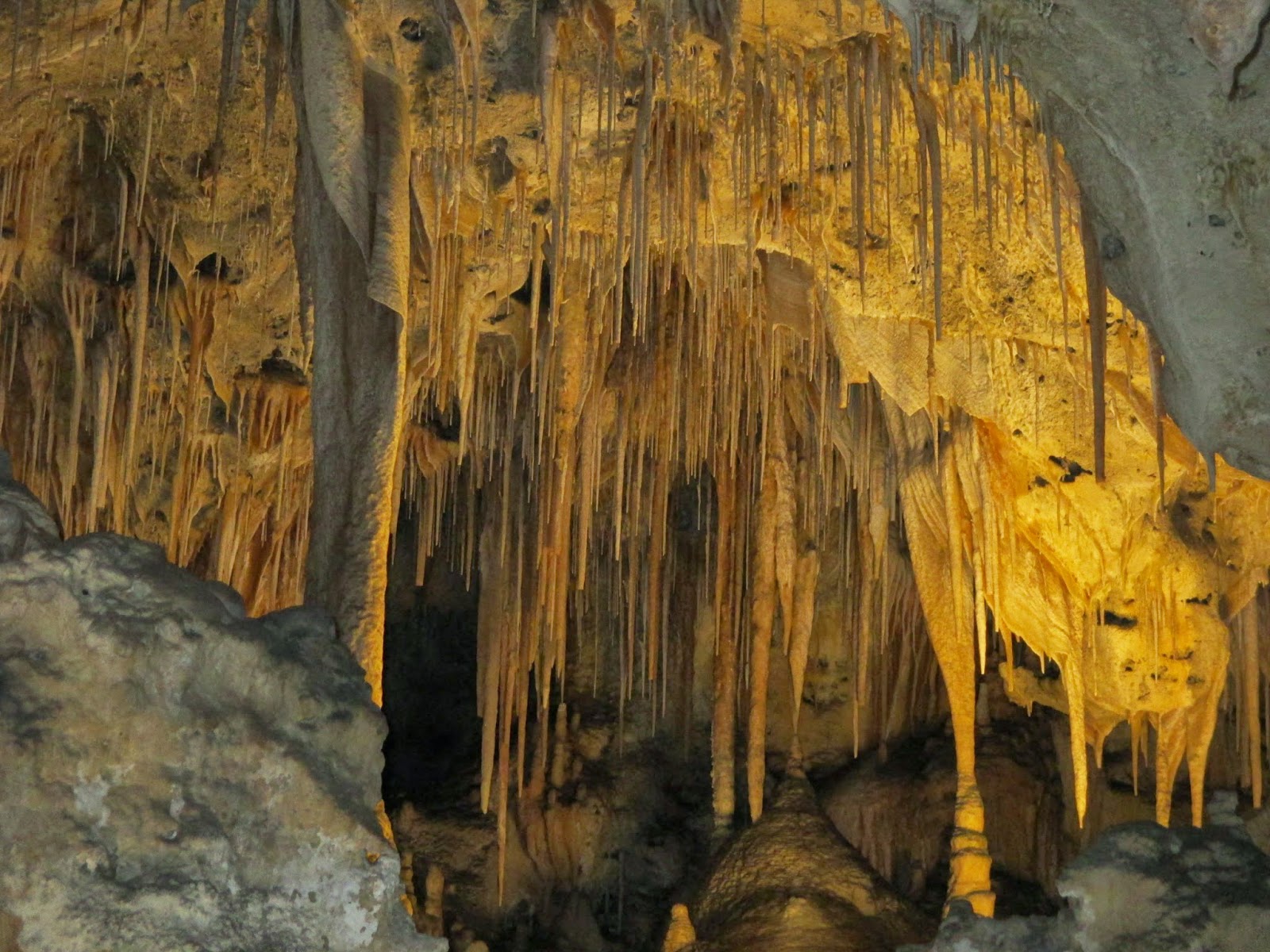 More stalactites and columns.  Amazing stuff.  The cave is pretty temperature stable, so a light jacket is desirable for some people.  I did fine without one though. 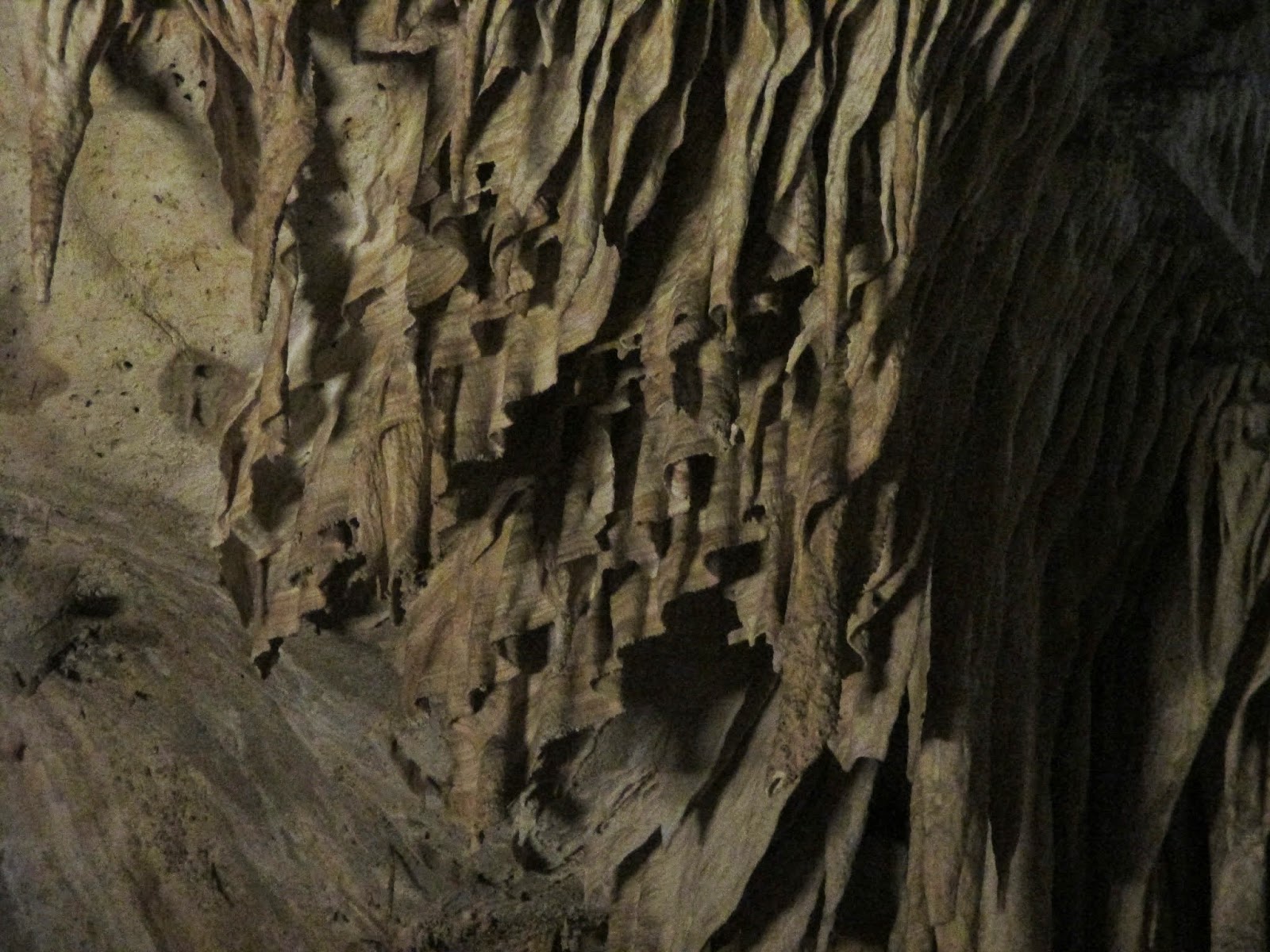 These draperies are not lit by the tour lights, but they caught my eye.  It is amazing that these are stone instead of cloth!  Overall, I thought the lighting at Carlsbad was very tastefully done.   The early explorers must have had a very different experience then we did.  I felt a little envious of them, but at the same time thought that I probably got a better overall view of the cave since they only had the light from their carbide lamps to go off of.  As we neared the end of loop the kids were again tired, so even  though I could have stayed until we got kicked out, we trudged to the elevators and the 1 minute ride to daylight. 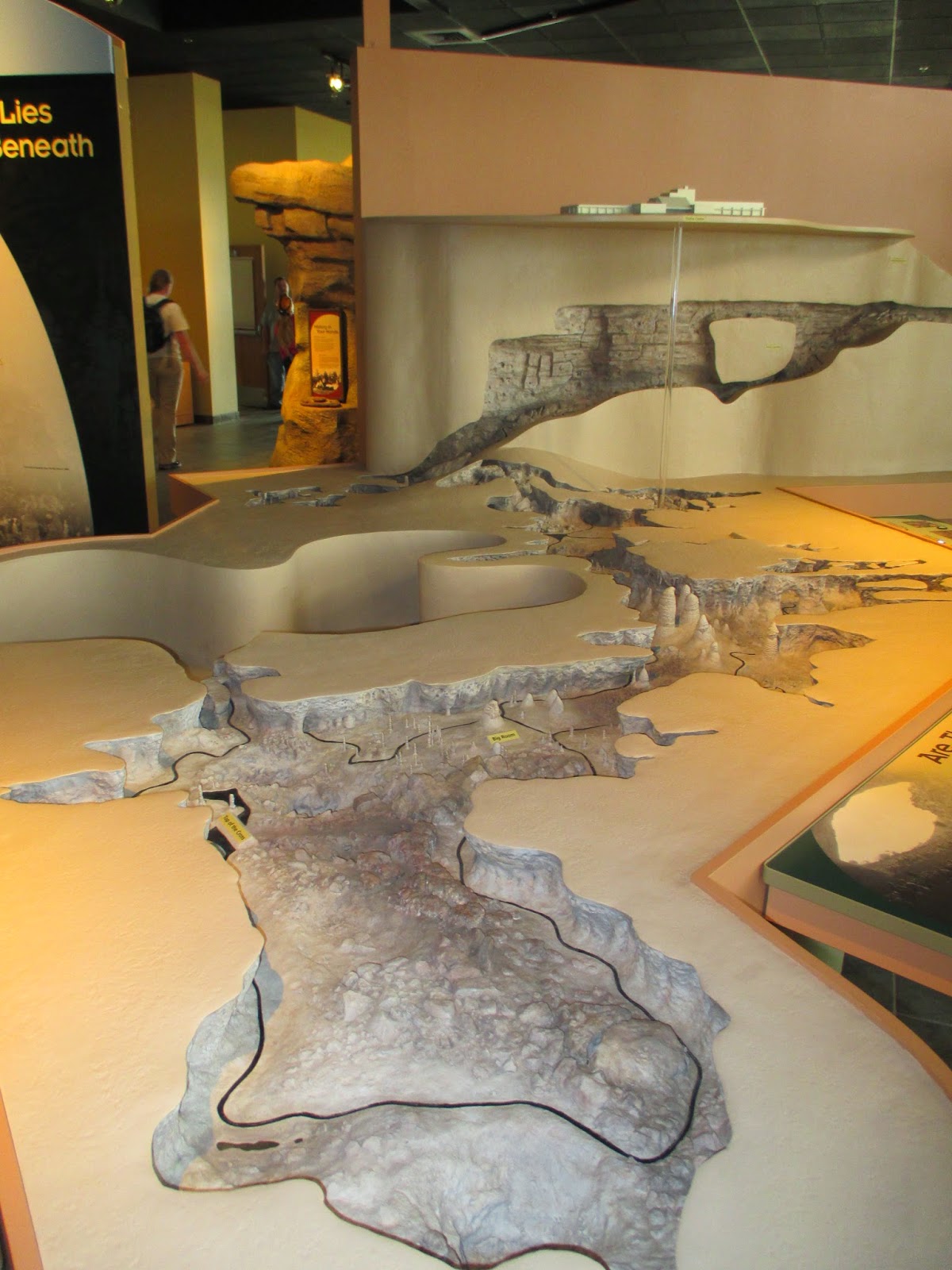 The Visitor Center has a model showing the cave and the route of the tours.  The visitor center is shown at the top, and the elevators are shown with a clear plastic tube.  Tour routes are shown by the black lines.

I was blown away by Carlsbad Caverns.  They are absolutely worth visiting.  We spent just over half a day and could have spent longer.  But half a day is about all that a 4 year old could take (walking the whole way on her own), so I was content with that.  If you're contemplating visiting Carlsbad Caverns- make it happen.  Do it.