We had a free weekend and I wanted to visit a few ghost towns, so we loaded the car and headed out.  I really wanted to visit Blacks Fork Commissary on the north slope of the Uintas, but routed us through Piedmont to check it out too.  I am glad I did.  I learned some pretty neat things on the visit. 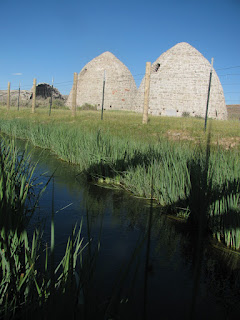 The Piedmont Charcoal Kilns and ghost town are located about 10 miles south of I-80, just off of exit 24 east of Evanston.  It's all on dirt roads, but they're dirt roads that are in good shape. 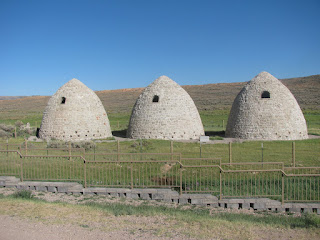 Of the 4 kilns that were built, only 3 are still standing.  They look like big beehives.  There's a small part on the site, with an sign that tells more about making charcoal and the history of Piedmont.

The town was built along the railroad tracks and lived and died by the railroad.  It lived as long as the railroad was there, but when a tunnel was completed a few miles north, the line was no longer used and the town withered away.  Now all that's left is a cemetary and 8-10 buildings. 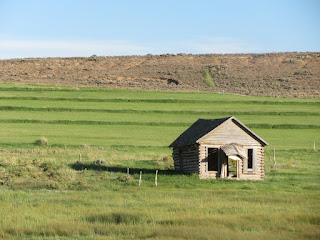 The sign had a few unique bits of trivia.

Apparently Butch Cassidy and the Wild Bunch met up in Piedmont on their way to rob the bank in Montpelier, Idaho.

Calamity Jane lived in Piedmont when she was a young girl. 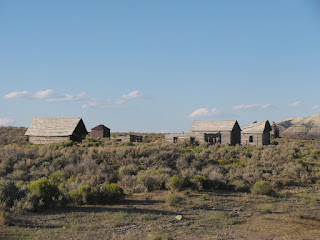 My favorite "I didn't know that" was that the driving of the Golden Spike at Promontory Utah was delayed for 3 days.  Originally the Golden Spike Ceremony was scheduled to happen on May 7, 1869.  The Vice-President of the Union Pacific Railroad was on the way to the ceremony when a bunch of unpaid workers caught wind of it.  They threw a bunch of ties and rubble on the track and the train had to stop.  They then unhitched the car of the Thomas Durant,Vice-President of the railroad, diverted it to a side track, and told him they wouldn't let him go until they got paid. They also captured the telegraph office to ensure their demands were met.  Quite embarrassed, Durant wired $200,000 to pay the 300 or so laborers, who then let him go.  His car was hitched to the next train and he proceeded on to the ceremony. 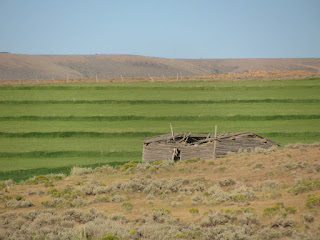 What's left of the town is about 1/4 mile west of the charcoal kilns.  It's on private property, so we just took pictures from the road.