I've had Blacks Fork Commissary on my list of places to visit for quite a long time, so this last weekend we made it happen.  It's a little over 2 hours from the Wasatch Front and isn't really near anywhere, but that's part of why I wanted to go there!  We drove in from the north past Meeks Cabin Reservoir for two reasons:  I wanted to stop at Piedmont, Wyoming on the way and the road over Elizabeth Ridge can be pretty washboardy and I didn't want to drive it twice. 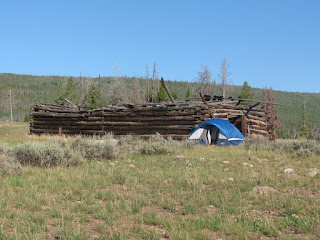 We pulled in about dusk, and rapidly pitched our tent right next to one of the old buildings.  Camping in a ghost town- how cool is that!  The kids had a hard time going to sleep, maybe because we were in a ghost town, but finally dozed off.  In the morning everybody was happy and excited for breakfast.  I pulled out my Coleman Stove and fried up a bunch of "toads-in-the roads".  After pulling the middle out of a piece of bread, I cracked an egg into it and put some cheese in it.  A fried egg and toast in one easy to handle package!  It's the ultimate camping breakfast.  Even before we were done eating everyone was anxious to go explore the buildings. 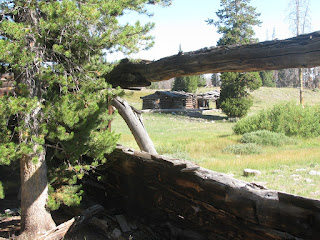 There are a dozen or so log buildings at Blacks Fork Commissary.  Most of them no longer have roofs as the buildings are slowly decaying.  I'm not quite sure why the town was built here, other than to cut lumber to send down to use for the railroad or something else.  In the general area there are several more tie-hack cabins, the West Fork of Blacks Fork having the ones that are most well known. 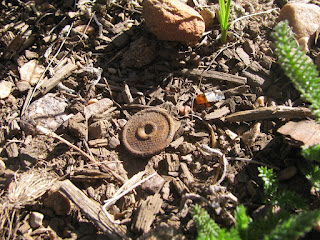 We found several old glass and pottery shards, and an old button.  Remnants from when people lived here. 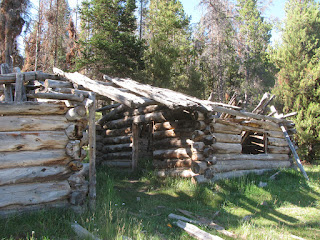 My favorite cabin was on the south side.  It had 2 buildings, with the roofs partially intact, with a dog-trot breezeway in the middle.  There was even some dirt chinking still between some of the logs. 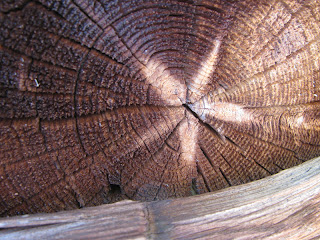 It's a great place to wander around at- if you like details and old buildings, there's so much to see in a small place ! 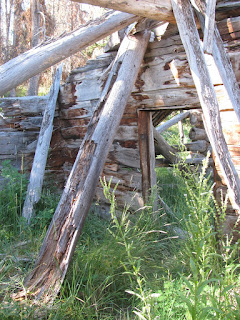 It's only about 10 miles past the turnoff to the West Fork of Blacks Fork, which can be pretty popular.  If you're up that way, I highly recommend taking a little detour and checking out the Commissary.