Canoeing and Fishing on the Bear River

Saturday dawned a little cool and cloudy.  A dentist appointment for my wife first thing Saturday kept us from camping the night before, but we still found a way to get out and enjoy the day.  I have had the Bear River on my radar for a solid month now.  It's a unique river in that it was classified as "Navigable" back when Utah was granted Statehood.  Because it is a navigable river (along with the Jordan  River and portions of the Green and Colorado Rivers), the riverbed is state owned.  This opens up all sorts of recreation possibilities along the corridor, especially with the gordian knot that exists on other waterways of the state.   The Bear River is one waterway that walking on the streambed undeniably exists. 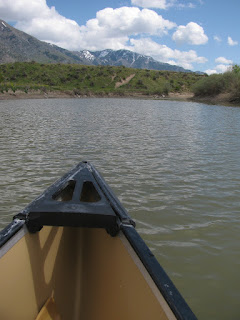 Last week we did a small camping trip to scout things out.  All systems go.  Canoeing on the Bear River looked amazingly awesome.  In Box Elder County t's a slow moving river, with no rapids to speak of.  I found several access points the best ones being at the the river access on Highway 102, and also one at Hampton's Ford near the Old Barn Community Theater.  Lesser access points, complete with steep banks exist at Petersen Park and Hansen Park.  With a canoe, the other points become tantalizing launching or ending points for a float trip. 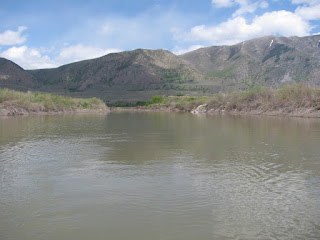 With the late start, we headed for the river access on Highway 102 between Tremonton and Deweyville.  Our plan was to float down to Petersen Park, then pull the canoe out there and spend some time fishing.  At the boat launch, we met a guy just coming in who had a huge 30" catfish.  He said he was fishing for bass, but the catfish took his jig and pulled him around for a while before he could net it.  NICE! 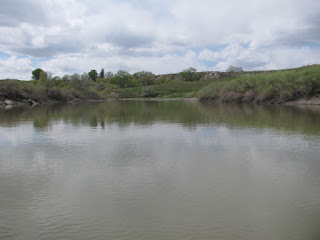 We headed out and floated down to Petersen Park.  We covered a mile of water in 20 minutes of paddling.  It was way too short of a float.  I enjoyed the gentle current and the solitude that exists when we're out on the water away from everything.  I'm going to have to come back and do one of the longer segments that run from 7 to 10 miles long. 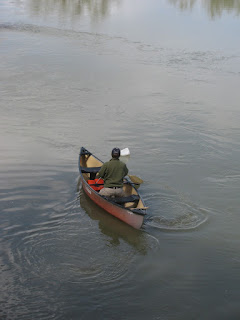 At Petersen Park we took the canoe out and set up our lines to do some fishing.  It was a little slow for us, but 2 carp and a crappie ended up on the line and in the net.  We had a fantastic day on the water.  I'll be back- you can count on it. 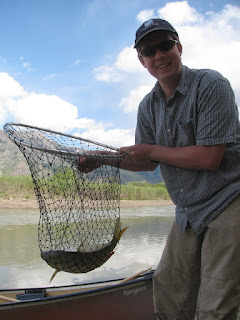