On our last visit to Willard, we were driving home and glanced back up at the mountains and realized that we had missed a few locations that probably held rock art.  I was quick to say "I'm coming back."  I got lucky and two weeks later, we headed back again to look for more petroglyphs and pictographs. 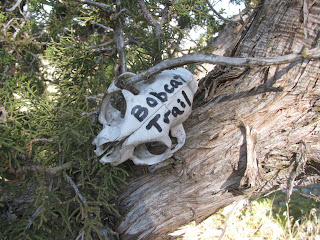 A few others had shown interest in coming along, so we met at the trailhead at 9:30, and in short order were hiking.  Along the way we crossed the "Bobcat Trail" which was noted by a bobcat skull stuck in a tree.  The eye sockets on the skull were huge! 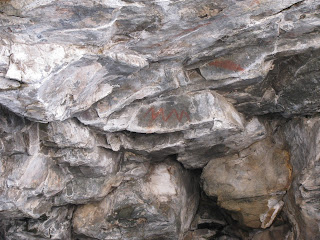 We got to the end of our hike, then fanned out to look for rock art.  We found several small pictographs (rock paintings), but no petroglyphs (rock carvings).  Several spots obviously had been painted at one time, but now have been weathered so much that they are nothing more than a reddish smear on the rockface. 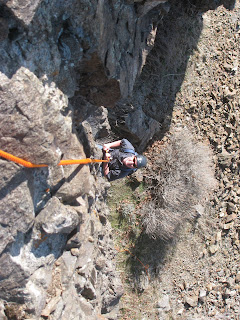 A few of us had a small diversion and set up a rappel down one of the cliff faces.   I'd been on 11 mm ropes before, but this was the first time I'd tried out a 9.  Wow it was fast!  The 9 mm rope was really fast.  Next time I go I'll have to set up with more friction, or use the larger rope. 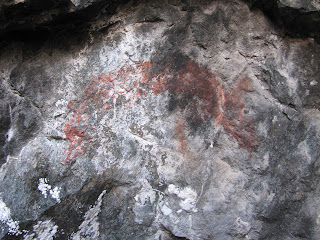 This pictograph looks like either a coyote or a dog.  A few thought it looked like a buffalo.  I still think coyote.  The next one though is my favorite. 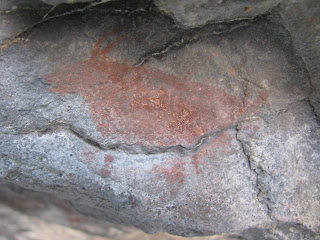 This little pictograph is of a goat.  It's less than 3 inches tall and is very delicate and intricate.  It's an amazing pictograph- especially being this far north. 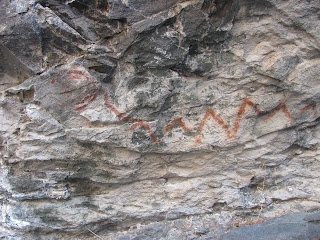 The last two pictographs are shown in a book called "Traces of Fremont".  It was nice to find them and enjoy them. 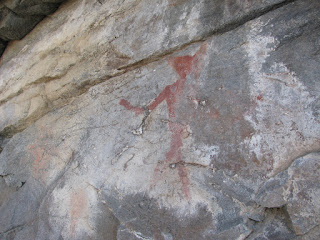 What a great day!  We all really enjoyed the hike and finding the pictographs.  Even after all the ones that we found and saw, I am convinced that there are even more to be found.