We visited  Iosepa on Saturday.  It's nothing more than a few houses and a cemetary today.  For 30 years though it was a thriving Hawaiian settlement in Utah.  In the mid-1800's, Joseph F. Smith was sent on a mission for the Mormon Church to the Hawaiian Islands.  As a 15 year old boy, he initially struggled, but then found success in converting many of the Hawaiians to the LDS Church.  In the late 1880's, these converts felt the urge to migrate to Zion and to be close to the nearly completed temple in Salt Lake City.  They boarded ships and sailed east (while many European converts were sailing west) to gather to Zion.  They found a place to settle in Skull Valley and named their small town Iosepa, Hawaiian for Joseph, after Joseph F. Smith. later the 6th prophet of the church. 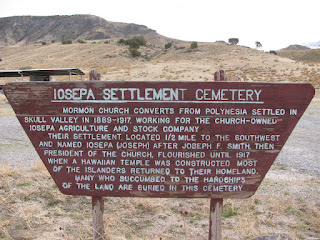 The settlement thrived and grew from about 75 to over 200 residents.  Improvements were made as the settlement grew and prospered.  Running water, orchards of fruit trees, and wide platted streets made Iosepa a solid community in the desert of Skull Valley.  Then, in 1917 change happened.  Joseph F. Smith, once a young missionary in Polynesia, now President of the Church of Jesus Christ of Latter Day Saints announced the construction of a temple in Hawaii.  The settlers of Iosepa were overjoyed.  Some of them made preparations to return to Hawaii.  Soon others joined in the preparation, and before long the trickle became a flood.  The town was sold to Deseret Land and Livestock, and the Hawaiian Iosepans returned to the islands of the Pacific.  All that remains today is a few houses along the highway, and a small cemetary in the dusty foothills of Skull Valley. 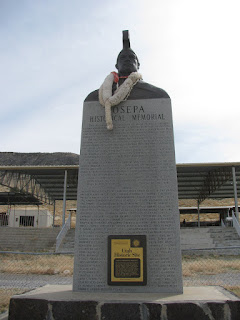 Nearest City: Iosepa, UT
Location: N 40° 32.513 W 112° 44.012
Time Needed: 30 minutes
Difficulty: Easy
Kid Friendly: Yes
Additional Info:  Every Memorial Day weekend, the Iosepa Historical Association has a luau at Iosepa.  Once again Iosepa comes to life as hundreds of Polynesians return to celebrate.  This luau is open for anyone to attend.
Posted by Ben at 11:01 AM