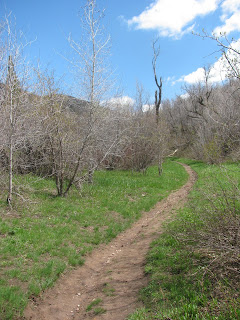 Killyon Canyon is in my opinion one of the hidden gems of the Wasatch Mountains.  It's a pretty hike, close to downtown, yet uncrowded.   I think part of the reason it's so peaceful is that finding the trailhead can be deceptive.  It's at the end of one of the side roads up Emigration Canyon, but the road looks a lot like somebody's driveway.  I found Killyon Canyon 5-6 years ago when I was at the U.  The March before I graduated, I took a certain young lady hiking there on a first date.  Several months later on another hike there I asked her to marry me.  Four years later it's still the best thing I've ever done. 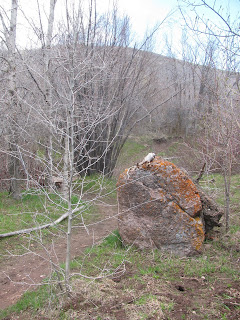 There's space at the trailhead for 4-5 cars, but the most I've ever seen is 3, including my car.  The trail parallels the stream up the canyon and crosses it a few times.  Most of the time the stream is out of sight in the trees and brush.  Just before the first stream crossing there's a huge conglomorate boulder right next to
the trail.  We always wonder how that boulder got there since there are no other rocks nearby. 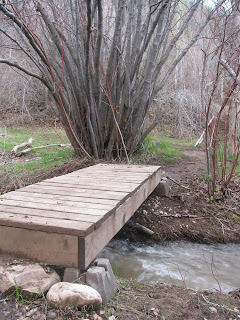 Somebody has done a nice job by placing two bridges at the stream crossings. 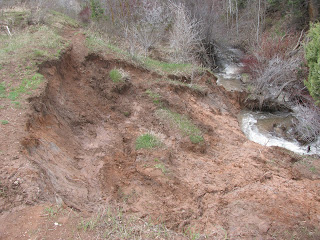 Further up the canyon, we found another recent development.  There's been a small landslide into the creek that's taken out part of the trail.  I'm pretty sure the landslide happened within the past week or so because it's been such a wet year.  I looked closely at the slide and the edges, and they aren't worn down at all.  A new trail around the slide area hasn't been trampled down either. 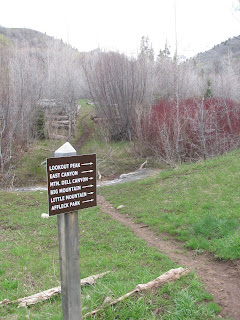 We went up to about where the trail splits.  At the intersection you can head left up a small side canyon, or continue on toward East Canyon, Affleck Park, or Lookout Peak. 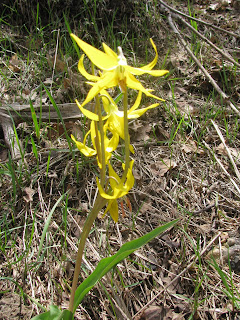 We enjoyed a picnic, then wandered back down the canyon.  We enjoyed the flowers and the aspens that were just beginning to turn green.  For me there are lots of happy memories in Killyon Canyon.  I'll be back again. 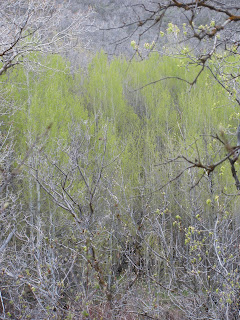