The Sun Face up Diamond Fork Canyon has been on my "to do" list for quite a while.  It's up a beautiful canyon that's relatively unknown except for some popular hot springs﻿.  Friday we had the opportunity to make it down to see the carving.  We were meeting some friends in Provo, so I made sure to head out early so we could find the sun. 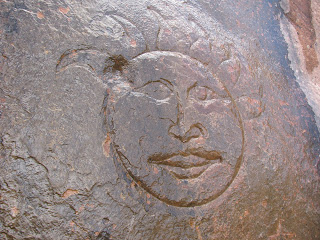 We drove to the Red Ledges Day Use area, parked the car, and headed up the small cove in the red rocks.  At the back of the cove and up on the side is a small shelf where the sun is located.  There was a trickle of water cascading down the face and covering the sun. 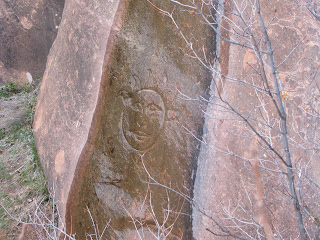 It just jumped out at us how cool the carving is!  You can tell it's really old, but at the same time it doesn't look like carvings done by native americans.  There seems to be a lot of speculation surrounding who carved it and any meanings it may have.  The most prevalent suspicion is that it was carved by Spaniards who had mines in the area. 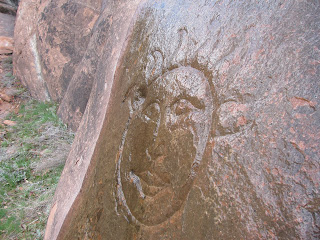 Nearby is Diamond Fork Arch.  It's on the east end of the picnic area and can be overlooked pretty easily.  It's not as impressive as other arches, but is still unique and significant. 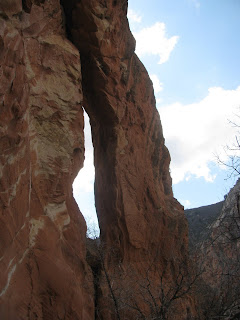 As we were walking around and enjoying the area, my wife looked down and grabbed an interesting piece of gravel.  It was obviously part of a truckload of other gravel, but this one stood out because of the round imprint  in it.  Looking closer, there are little grooves inside it.  It's a fossilized imprint of a crinoid stem.  There might be others around, but you'd have better luck finding where the gravel came from and looking there. 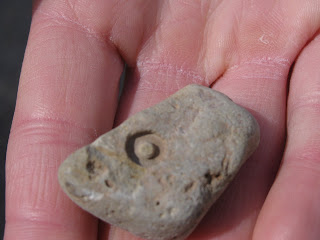