Estes Park is 40-45 miles away from Fort Collins. It's also the gateway to Rocky Mountain National Park. A few days ago we went up there to see what there was to do in Estes Park. We didn't want to go into the park, but instead hang out in town. 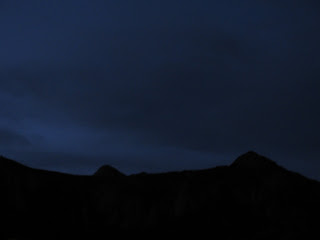 The mountains around are pretty impressive and I've heard that there's several hiking spots nearby, but I didn't look any up. 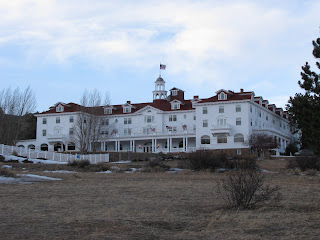 We looked at the Historic Stanley Hotel. It was built by the guy who invented the Stanley Steamer- a steam powered automobile. I've heard they do tours there, but didn't check because it was a last- minute trip. 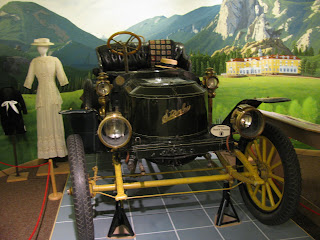 The Estes Park Musem is pretty cool too. My favorite exhibit was one of the old Stanley Steamer cars. They had an old cabin, art exhibits, an exhibit on elk, a flood, and early life in Estes.
We also went downtown to their main drag, about 3 blocks long. We looked at several shops. There are a few art shops, a ton of candy stores, some rockshops, some with nicknacks, and a few eccentric ones. Behind the stores downtown is the river walk. It's right along the river and is kinda cool too. There's more to do in the summer, but since winter is the off season, it was pretty quiet.
Nearest City: Estes Park, CO
GPS Coordinates:
Time Needed:
Difficulty:
Kid Friendly:
Additional Info:
Posted by Ben at 5:15 PM